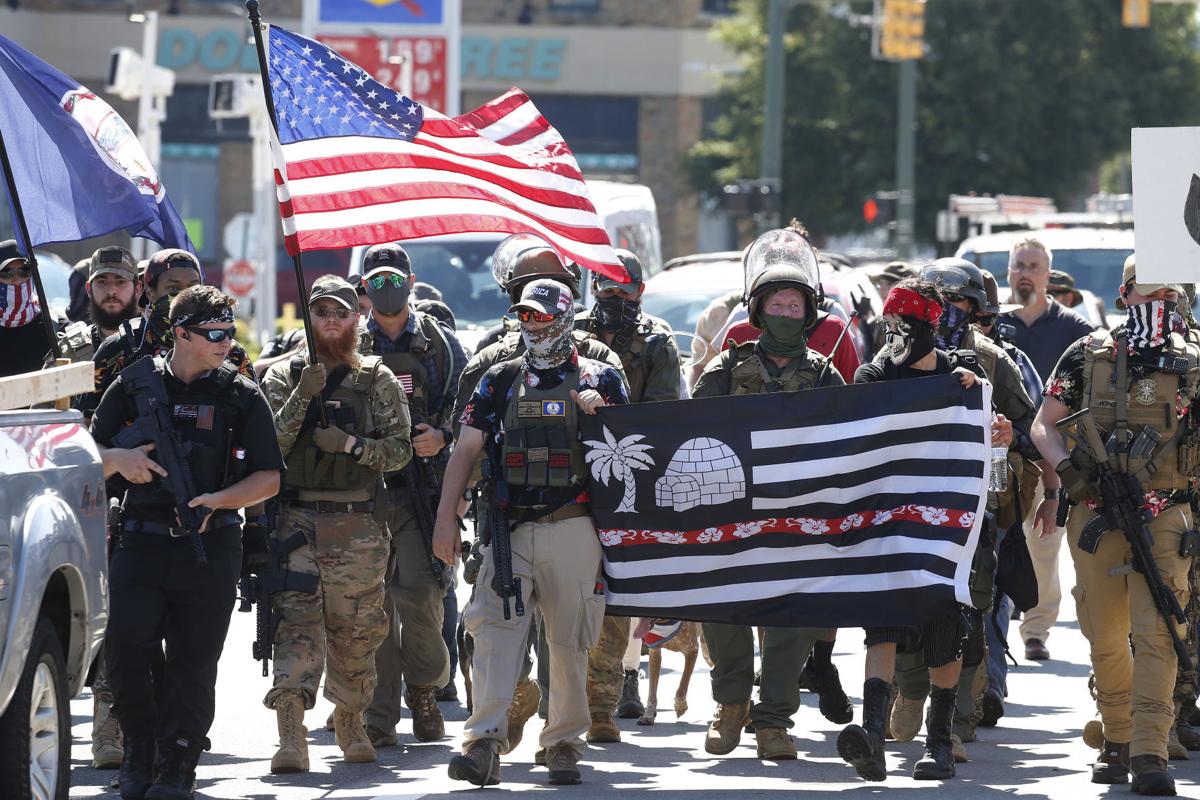 A group of heavily armed men march down West Broad Street on Tuesday, August 18, 2020 toward the Science Museum of Virginia where the Virginia Senate is holding a special session. The Virginia House of Delegates is meeting separately at the Stuart Siegel Center at Virginia Commonwealth University. The two houses held separate sessions due to virus distancing.

Supporters of the Marcus Alert march down West Broad Street from the Virginia State Capitol to VCU Sigel Center, where the Virginia House of Delegates have a meeting, in Richmond on Tuesday, August 18, 2020. The alert is about mental health professionals would respond to crises instead of police. 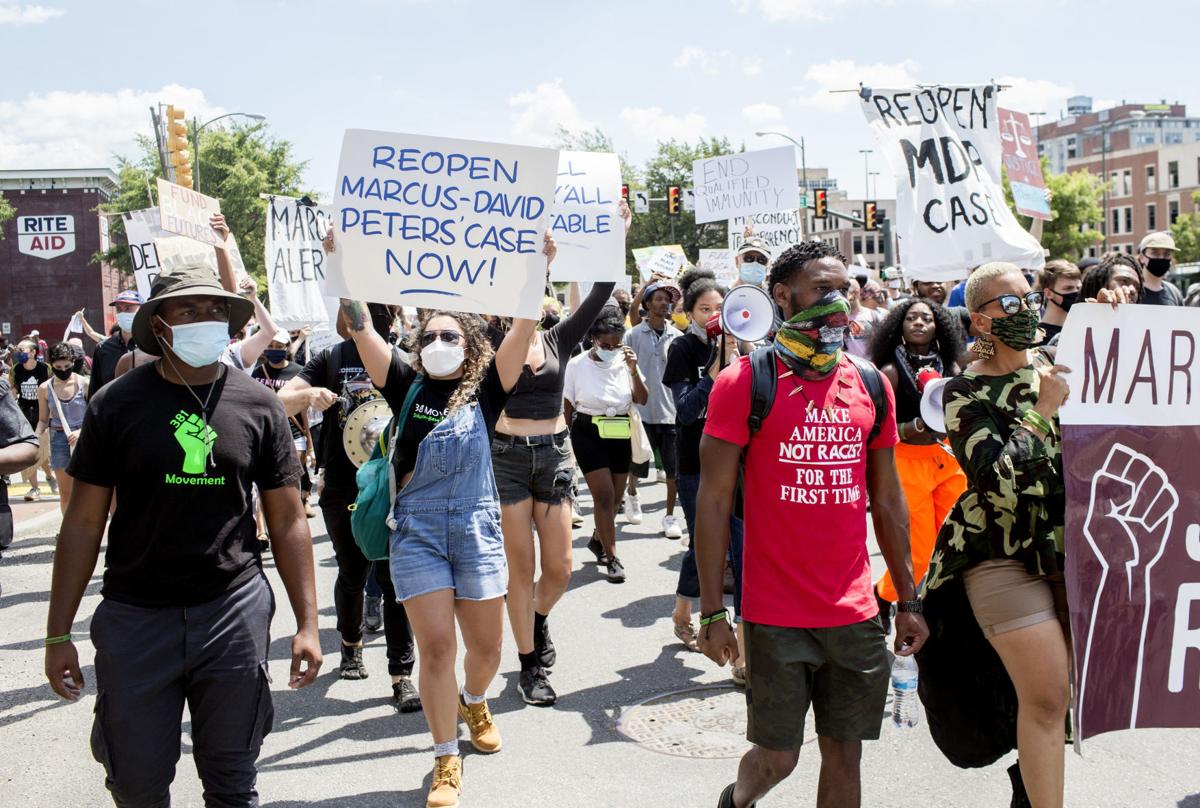 Supporters of the Marcus Alert marched along West Broad Street from the Virginia State Capitol to VCU’s Siegel Center, where state delegates were convening.

On Tuesday afternoon, as the Virginia Senate was gaveling in at the Science Museum of Virginia and the House prepared for the special legislative session at the Siegel Center, hundreds turned out on Broad Street to call attention to their legislative priorities.

One group marched down Broad Street demanding their calls to fund a statewide Marcus Alert System be heard. Another marched from the Capitol to the Science Museum in tactical gear and carried rifles for their Second Amendment rights. A third protest stood nearby calling for an increase in school funding. Earlier in the day, one group lobbied for rent relief and an end to evictions.

At one point, the marches walked past each other as the “Fund Black Futures” march, the largest protest that day, neared the Siegel Center — where the House convened at 1 p.m.

Thick blocked letters on signs read, “End Qualified Immunity” and “Black Liberation.” GRTC riders waiting for the bus thrust their fists into the air, bobbing their heads to “fight the power” chants.

In the 82 days since Richmond’s first protests, the demands of organizers against racial injustice haven’t changed.

They include reopening the Marcus-David Peters case; defunding the police; dropping all charges against protesters; removing monuments to white supremacy; establishing an independent civilian review board with subpoena power; funding the Marcus Alert; and releasing the names of Richmond police officers under investigation for use-of-force.

Longtime organizer Rebecca Keel spoke to nearly 200 people gathered outside the Capitol for the “Fund Black Futures” march about how Black activists and the family of Marcus-David Peters — a high school biology teacher and VCU alum who was shot and killed by Richmond police in the midst of mental health crisis — have advocated for two years for mental health professionals, rather than police, to respond to crises.

“That is the Marcus Alert, and that is what legislators will be making decisions on throughout the special session,” Keel said. “We are literally building what does not exist and, goddammit, we are going to do it.”

Democratic lawmakers, who control the House and Senate, are focused on circumventing excessive use of force by police and holding officers and their departments accountable. The Northam administration is pushing forward policies that would make it easier to decertify police officers for violation of state and department policies and be permanently removed from law enforcement.

Princess Blanding, the sister of Marcus-David Peters, said this was barely a start. Peters’ case is still considered a justifiable homicide as legislators debate a statewide alert system named after him, she said.

Once the demonstrators reached the Capitol again, nearly four hours from when the march began and “WAP” by Cardi B and Megan Thee Stallion pulsed through car speakers, organizer Kalia Harris took the mic.

“This is just the beginning,” Harris said.

On Tuesday morning, about 50 people, many with rifles slung across their chests, marched from the Virginia State Capitol to the Science Museum of Virginia. Mike Dunn, a 19-year-old Libertarian and Second Amendment supporter, walked at the front of the crowd.

While gun restrictions aren’t being discussed in Tuesday’s special session, Dunn said he remains concerned about a bill that would ban assault weapons. The measure, which failed to advance in the Senate Judiciary Committee in February, was tabled until 2021.

Feet away from Second Amendment activists, a group of 40 stood on the sidewalk calling for increased funding toward schools.

A man named Cory, who declined to give his last name, marched with gun-rights activists and wore a black vest with crossed handguns on his back. When a woman shouted to him to help fund schools, he took a pink pool float with the words “fund our schools” imprinted on it and held it over the street to attract the attention of drivers.

“When we talk about our culture, how great it is, this is what we mean,” said Robert Walker.

Cory stood with the school-funding activists until someone yelled to defund police. That’s where he drew a line, saying that doing so instead of removing bad officers would leave cities in anarchy.

Behind the Science Museum stood a group called “We Back Blue,” which supports law enforcement and was started in June by Melissa Robey, a Manassas resident whose sister is a detective. Her grandfather was a state trooper, and her father was a Washington, D.C., police officer.

The organization is against taking resource officers out of schools, ending qualified immunity and defunding police, three main arteries to organizer demands.

Robey said she refuses to use divisive language such as “blue lives matter” or “all lives matter,” adding that her organization has marched alongside Black Lives Matter protesters and treats everyone with respect.

Late Tuesday morning, a Black man who identified himself as Pops walked toward their group with a rifle slung over his chest and a hat that read “I can’t breathe.” Pops, 47, often speaks to crowds at Second Amendment rallies.

He’s critical of police, but he told the group they have common ground. Unnecessary police violence, he said, shouldn’t be accepted.

“If you kill someone, it shouldn’t matter what color their skin is,” Pops said.

At the anti-eviction event, which took place for about an hour Tuesday morning, dozens of people gathered outside the Science Museum of Virginia.

“Eviction is violence” was the chant that echoed most.

“Desalojo es violencia,” cried those who spoke Spanish. They were about half the crowd.

One woman said her entire family suffered from COVID-19, which prevented her husband from working. Now they’re facing eviction.

“I feel like we have no voice in this country, without papers,” the woman said in Spanish.

Adolfo Bermudez, also of Richmond, said he was there speaking for “those hiding in basements.”

“We are fighting for something that is our right,” he said — a safe place to call home.

Since June 22, when the eviction moratorium expired, which had been put into place after the start of the COVID-19 pandemic, there have been more than 4,100 evictions statewide, according to Elaine Poon, an attorney with the Legal Aid Justice Center, out of Charlottesville, which had been tracking the cases. In early August, the Virginia Supreme Court granted a temporary statewide moratorium through Sept. 7, which stops all eviction proceedings.

“There are hearings happening all the time,” Poon said, adding that the current stay order doesn’t prevent the hearings, but rather the issuance of a document that allows a landlord to enlist a sheriff’s deputy to force a person from their home. “People think that they don’t have to go to court, but they should still go.”

Organizers, who included members of the New Virginia Majority, Clergy Action RVA, Tenants and Workers and others, are calling for a statewide moratorium on all eviction proceedings and $1 billion in rental assistance.

PHOTOS: Protests in Richmond as special session of General Assembly gets underway

A group of Second Amendment supporters marched down West Broad Street from VCU's Siegel Center toward the Science Museum of Virginia. At the s…

Gov. Ralph Northam promised the General Assembly on Tuesday that he remains committed to “the progressive budget” it passed this year, but sai…

Virginia lawmakers will convene on Tuesday for a high-pressure special session dedicated to confronting the impact of COVID-19 on the state, a…

A group of heavily armed men march down West Broad Street on Tuesday, August 18, 2020 toward the Science Museum of Virginia where the Virginia Senate is holding a special session. The Virginia House of Delegates is meeting separately at the Stuart Siegel Center at Virginia Commonwealth University. The two houses held separate sessions due to virus distancing.

Supporters of the Marcus Alert march down West Broad Street from the Virginia State Capitol to VCU Sigel Center, where the Virginia House of Delegates have a meeting, in Richmond on Tuesday, August 18, 2020. The alert is about mental health professionals would respond to crises instead of police.

Supporters of the Marcus Alert marched along West Broad Street from the Virginia State Capitol to VCU’s Siegel Center, where state delegates were convening.