‘This is my duty’: Richmond amateur photographers have taken to the streets and Instagram to document a movement
3 comments
Share this
Only $5 for 5 months
1 of 5 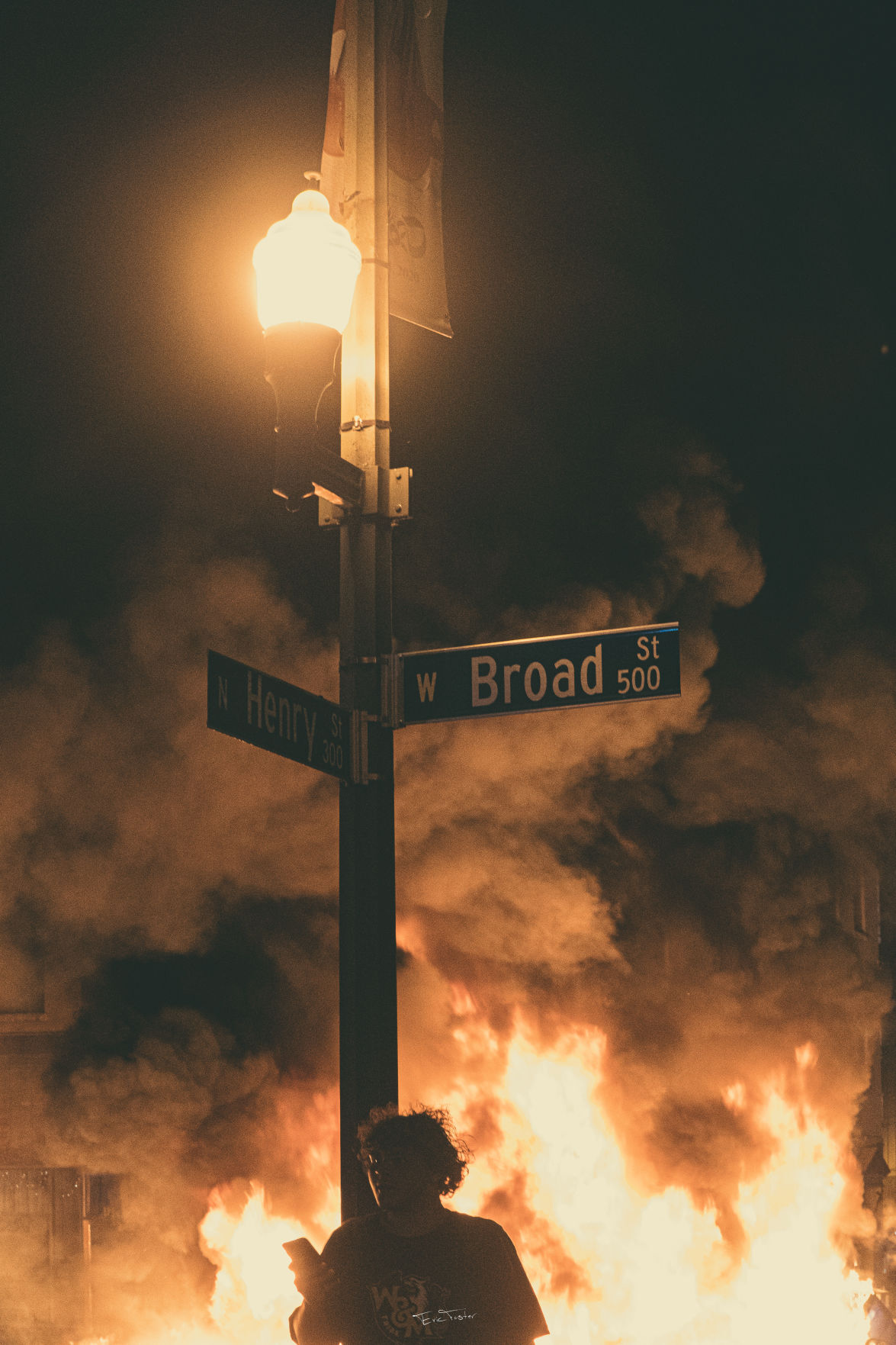 Eric Foster took this image just before being hit in the leg by a tear gas canister at the demonstration in Richmond on May 29. 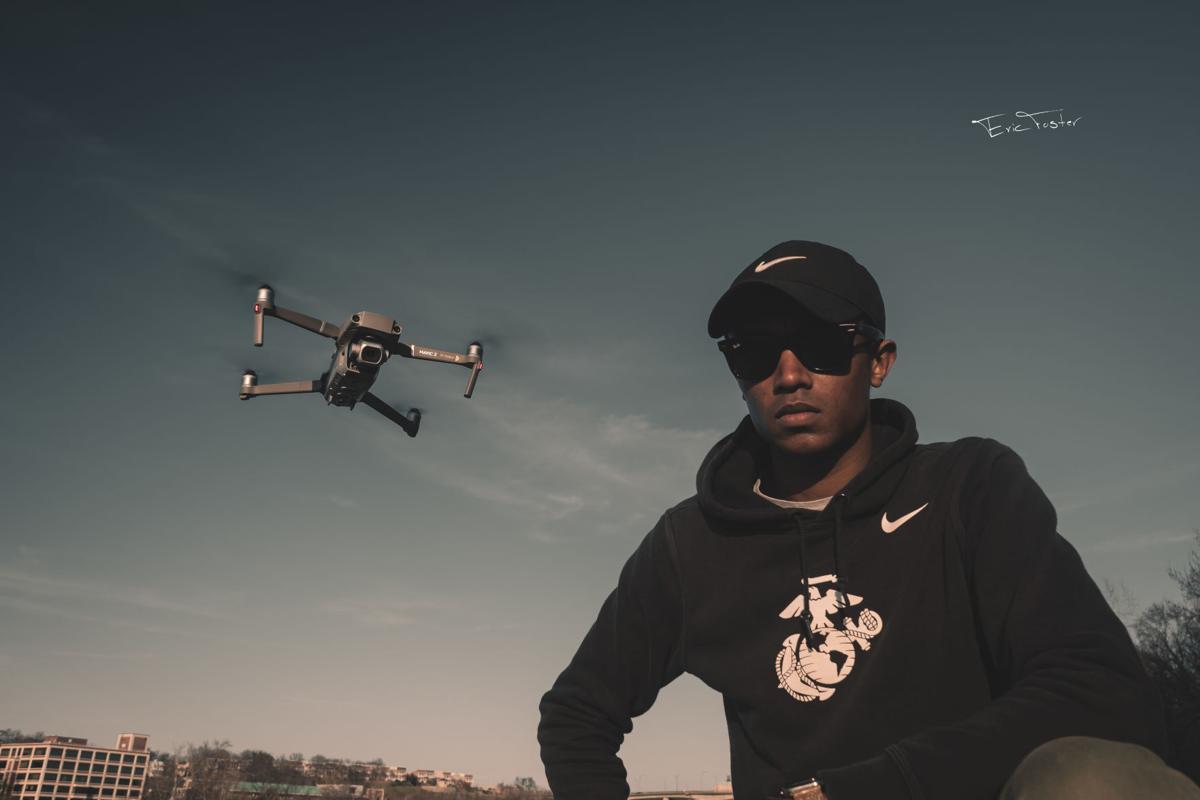 Eric Foster, shown with his drone, went out almost nightly to photograph the first few weeks of protests in Richmond. He got his start as a photographer in the Marines, though he never shot combat photos. 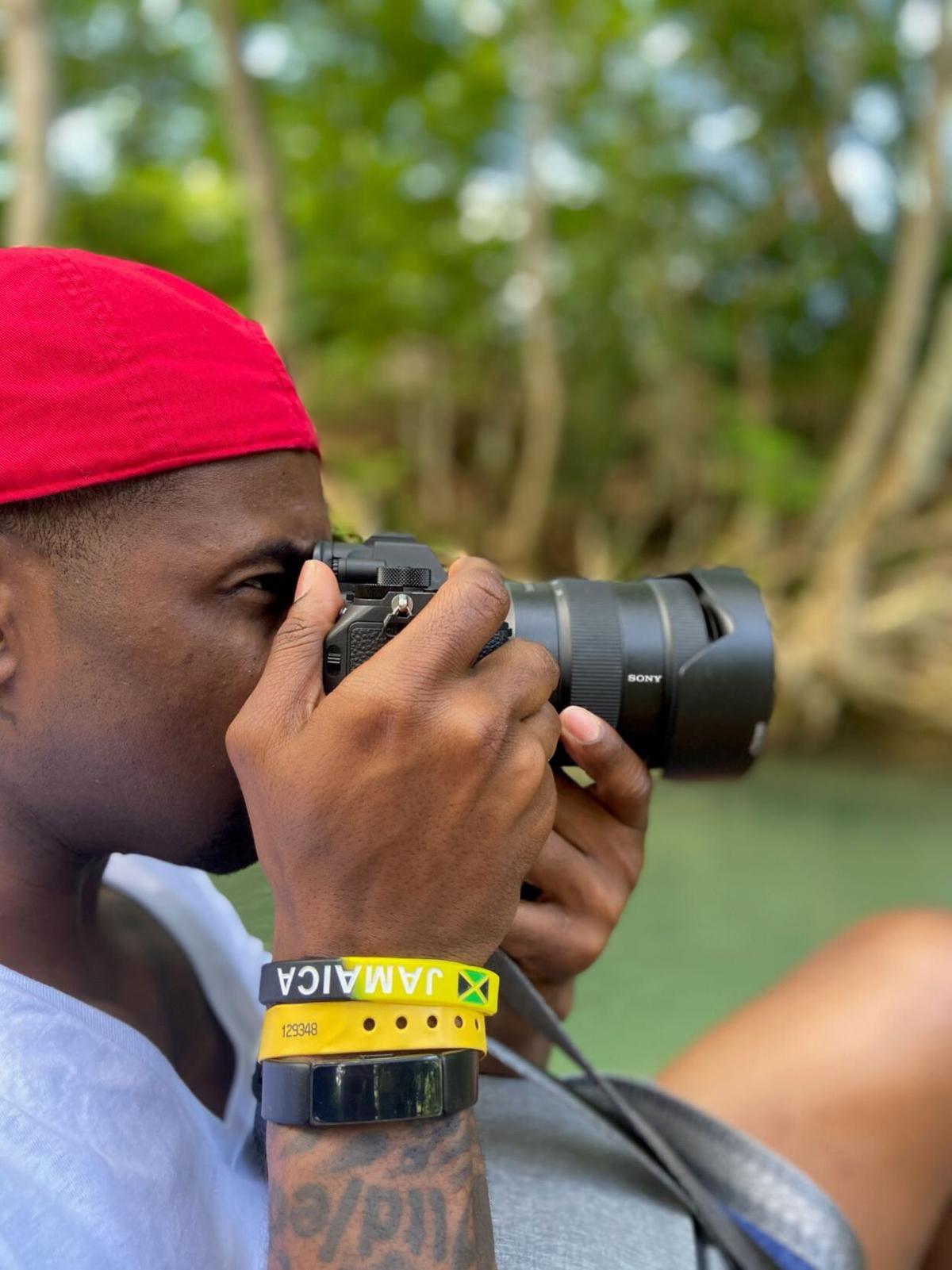 Darrell Booker sees his photos not only as a historical record but also as a way to keep those who cannot attend the protests connected. 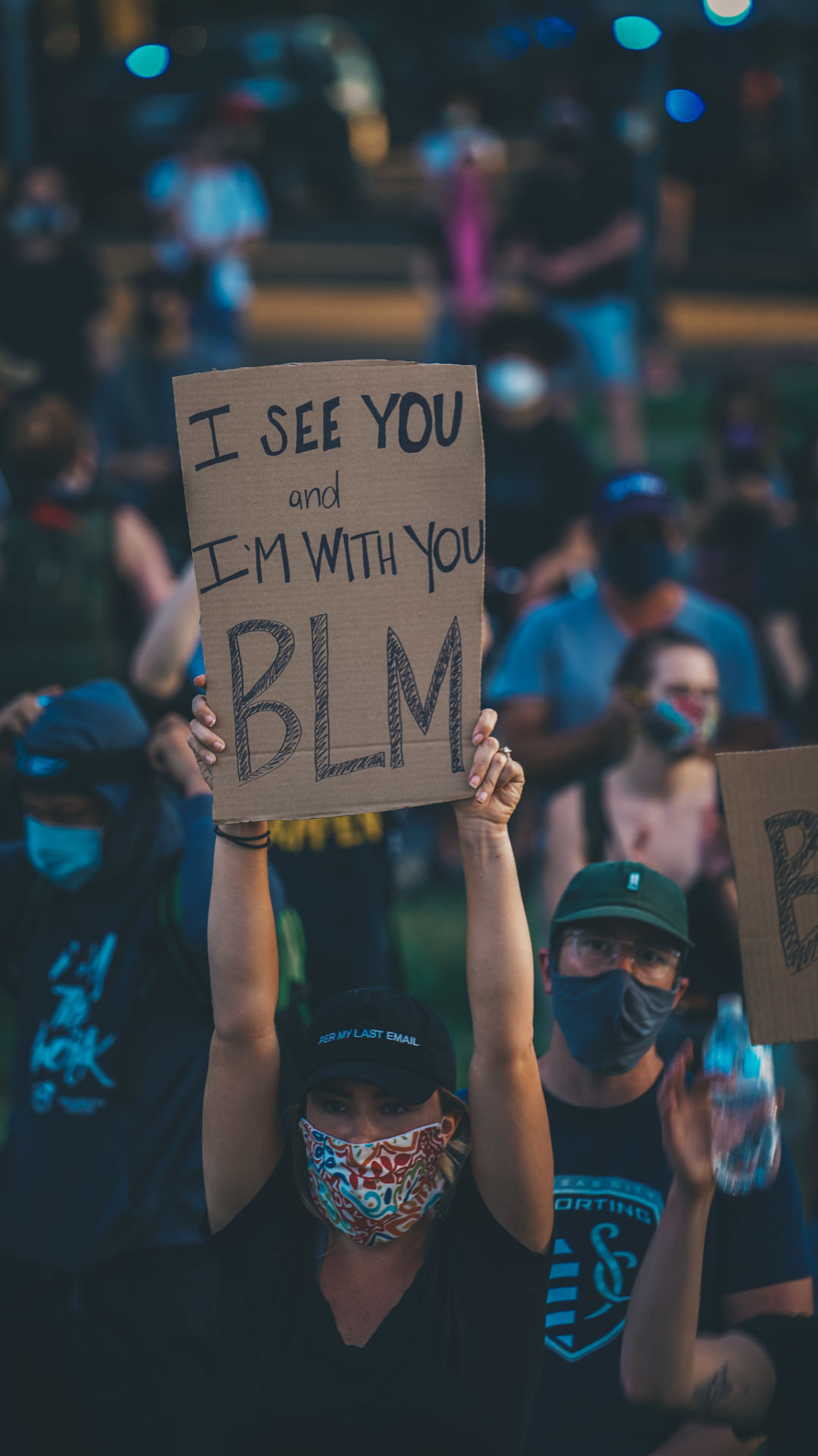 Taken on June 1, "moments before we were tear gassed," according to photographer Darrell Booker. 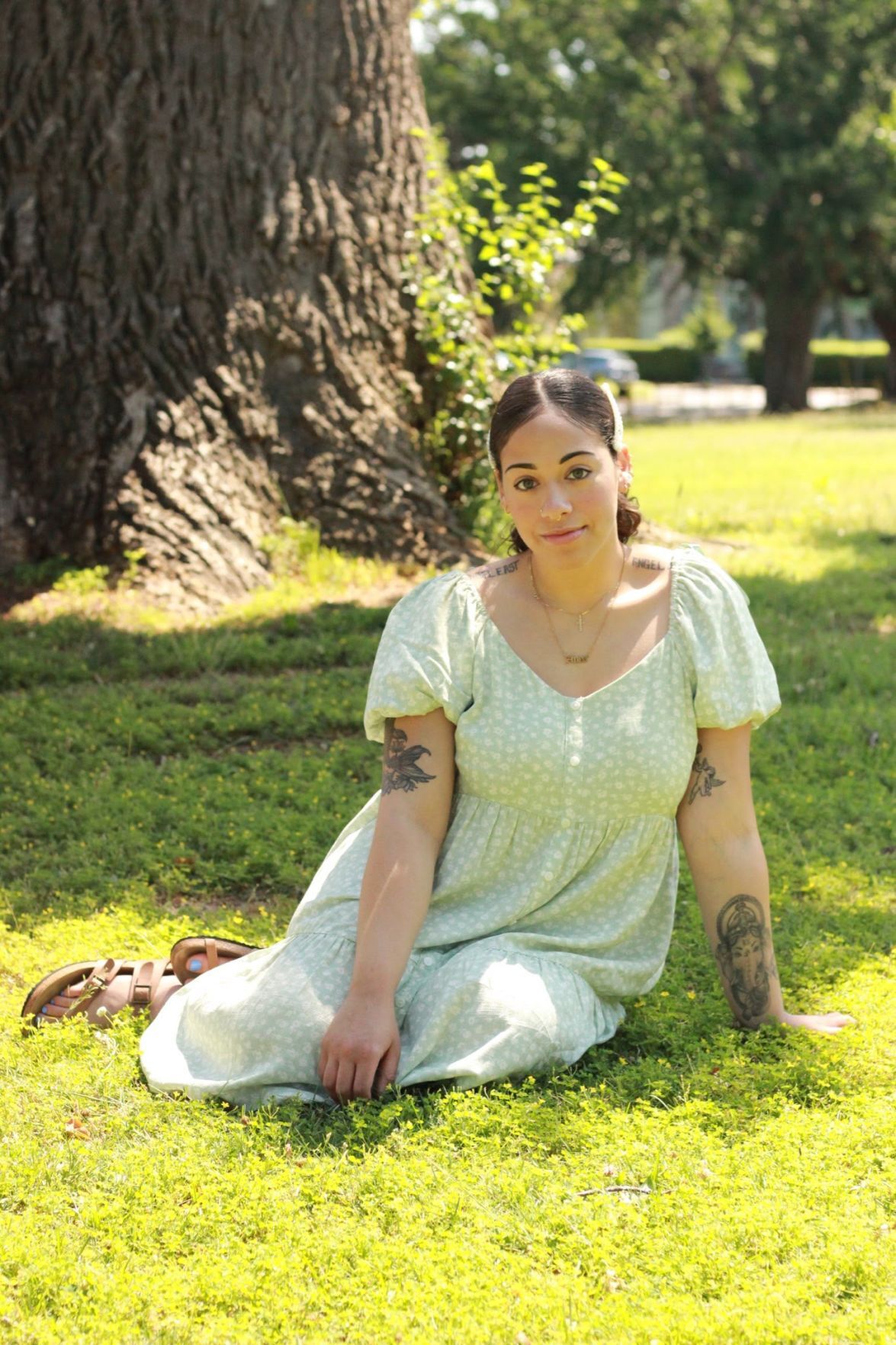 Eric Foster had just taken a photo that would later earn him over 1,000 likes on his Instagram account, thepreppyeric, when police shot the 23-year-old Black photographer in the leg with a tear gas canister.

It was Friday, May 29, the first night protesters in Richmond took to the streets in response to Minneapolis police killing George Floyd several days prior. Protesters rushed over to Foster to make sure he was OK, but he was too filled with adrenaline to care that he was hurt.

Foster was in his element. He works as a photographer, primarily taking portraits or pictures of houses and real estate for home sales listings, but his dream is to become a conflict photographer — someone who documents conflicts like wars and riots.

So, earlier that evening, when he had seen a mass of protesters marching on West Broad Street past the office where he had just wrapped up a photo shoot, he knew he had to join the fray.

It was the first time he’d photographed anything so dangerous. Though he got his start as a photographer during his four-year service in the Marines, he never shot combat photos. Rather, as the youngest person in his unit, he was put in charge of updating the unit’s Facebook page with pictures of events like Family Day.

Foster, who lives in Richmond, had seen protests in the city before, like organized demonstrations that occurred when President Donald Trump was elected in 2016. But those were much calmer. “People just protested and went home,” he recalls.

In contrast, during the protests on May 29, “helicopters were flying around, cars were burning, people were throwing rocks at windows. It was a glimpse of what I would assume [it would look like] if the world was ending.”

As nightly protests and demonstrations have taken over Richmond streets this summer, amateur photographers and citizen photojournalists have taken to the streets alongside protesters to document the movement and share the latest on Instagram, the popular image-based social media platform.

Rather than simply searching for the most aesthetically pleasing shot, these locals have talent upon themselves to create a new kind of public record.

“I can’t wait to flex on my grandkids, because this is probably going to be in their textbooks,” Foster said.

When Destyni Kuhns-Gray, a rising senior studying early elementary education at Virginia Commonwealth University, brings her camera to protests, she aims to document the emotions of the people present. Capturing different people’s expressions helps to tell the story of Richmond’s ongoing protests as more than just a series of events. Instead, it emphasizes how the events are influencing individuals — frustrating them, hurting them, uplifting them.

“People are yelling, people are chanting, people are making music,” she said. “It’s not only anger and raw emotion, but it’s [also] community and loving emotion.”

Of course, she follows the protocol recommended by some journalism news sites of asking anyone whose full face she photographs if they’re OK with her putting their image on her Instagram account, destyyyxx, where she has over 1,200 followers.

Most people say yes, but they often ask who she’s working with, a question the longtime amateur photographer, who works independently, always feels awkward answering.

Kuhns-Gray, a mixed-race Williamsburg native, first picked up the hobby in the eighth grade and worked in a clothing store in Colonial Williamsburg as a teenager to raise money for a good-quality digital camera. Her work has mainly focused on portraiture, so photographing the action and movement of the protests has required her to develop new skills.

Over the past two months, Kuhns-Gray has captured so many pictures that she can’t name a favorite. “Wherever I am, whatever I’m doing ... I get that one picture that’s like, ‘That’s the one. That’s going to stand out,’” she said.

Darrell Booker sees his photography, which he shares with more than 1,200 followers on Instagram at darrellbooker, not only as a historical record but also as a way to keep those who cannot attend the protests informed and connected.

“In prior times, you just had to totally rely on conventional media. But with the boom of social media, we no longer have to fear that someone has twisted the story,” Booker says. “There’s a huge population of people that, this is how they’re being connected to this particular movement.”

Booker, 42, feels deeply connected to the civil unrest in Richmond. He was born in the city and moved to Chesterfield at the age of 8, where his was the only Black family on his street. He raised his children in this city and has driven past Confederate monuments all his life.

As a native of the area, he didn’t see the protests as merely one leg of a national movement, but rather as a response to Richmond’s unique problems with racial inequality.

That’s why he felt a sense of responsibility to capture pictures of the unrest. The first night he attended the protests was May 30. He, his 21-year-old son and his brother met near Monroe Park after the throng of protesters had already begun moving down Broad Street. He remembered feeling disheartened by the size of the crowd — until they eventually caught up with the rest of the group at the State Capitol.

“In that moment, it felt like what I saw on CNN the night before,” says Booker, referring to footage he had seen of protesters in Atlanta on the night of May 29. “The police were in riot gear in front of us. The crowd, they were tearing down the barricades, they were throwing stuff. And I just started snapping.”

Later in the night, they made their way to the police station, where police pepper-sprayed and tear-gassed the protesters. But after briefly dispersing, nearly the entire crowd recovered from the attack and made its way back in front of the station, Booker recalled.

“In that moment, I just felt so proud that black, white and especially young [people] were fighting for us,” he says.

Booker took as many pictures as he could, compelled to memorialize the powerful moment. As he snapped picture after picture, he thought about the powerful affect that images of the Civil Rights Movement had had on him when he was growing up, and how he wished there was an even greater visual record of that time.

Like Kuhns-Gray and many others who photograph the protests, Booker is not a professional photographer. His day job at Microsoft does tie in to the work that he’s been doing over the past two months, however. He is the newly appointed program manager for the tech company’s new five-year initiative to bring the resources and support Microsoft has long offered big-name nonprofits, such as the Gates Foundation, to community organizations.

His photography and his work with the program feed into each other. “Being out and photographing and being on the ground really helps me to inform the work that we do at Microsoft,” he says.

Though photography is Foster’s full-time job, photographing the protests doesn’t feel like work to him. He characterizes the work he usually does — shooting things like graduation portraits and real estate — as boring compared to the meaningful, action-filled shots he’s gotten during the protests.

Foster has also been getting contacted about freelance work because of the images he’s posted on Instagram, where he has over 3,200 followers. A drone shot he took of protesters gathered around the Lee Monument graced the cover of the July issue of Richmond Magazine.

“It’s a great time — I hate to say it — to get noticed, because it’s an odd subject to get noticed on. But everyone’s just watching,” says Foster, who went out almost nightly for the first few weeks of protests. He is now hoping to travel to other American cities, possibly New York or Chicago, to document the protests there.

Meanwhile, Booker and Kuhns-Gray are among the many photographers still attending and shooting protests and other events across the city.

Eric Foster took this image just before being hit in the leg by a tear gas canister at the demonstration in Richmond on May 29.

Eric Foster, shown with his drone, went out almost nightly to photograph the first few weeks of protests in Richmond. He got his start as a photographer in the Marines, though he never shot combat photos.

Darrell Booker sees his photos not only as a historical record but also as a way to keep those who cannot attend the protests connected.

Taken on June 1, "moments before we were tear gassed," according to photographer Darrell Booker.