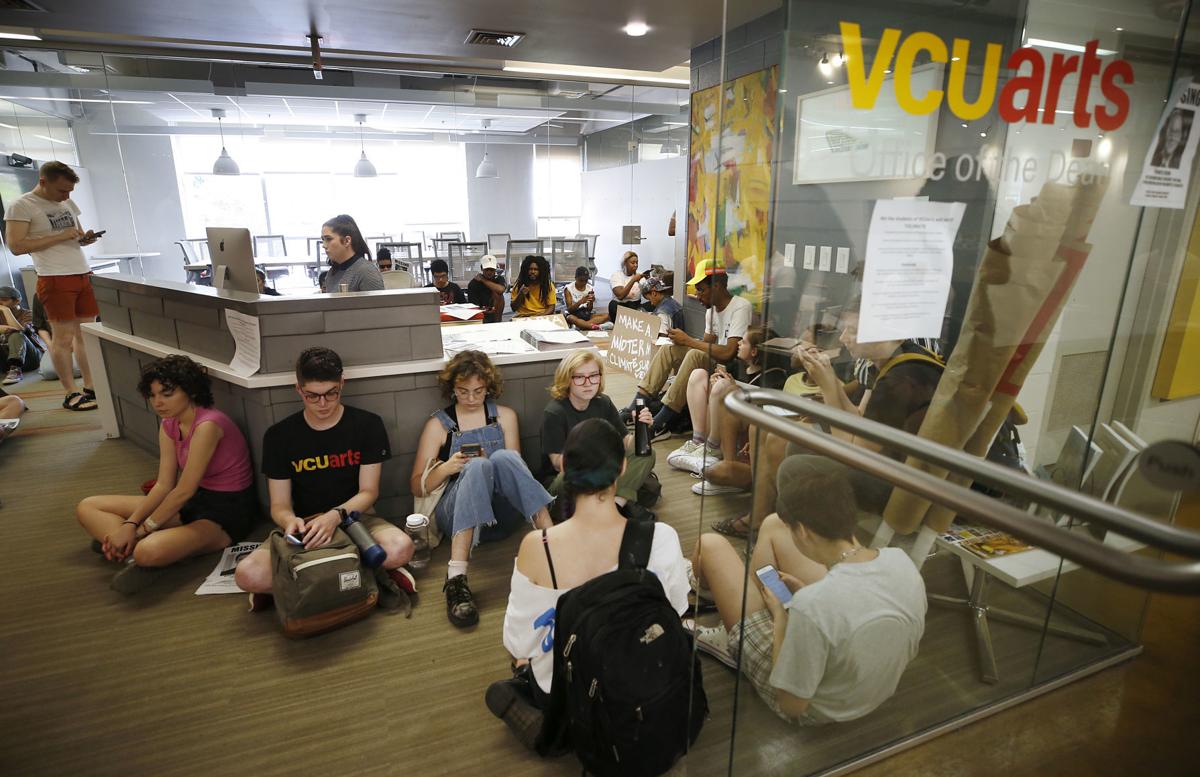 VCU students held a sit-in Wednesday to demand that the school increase its diversity and that associate professor Javier Tapia be fired after an alleged incident of racial profiling. 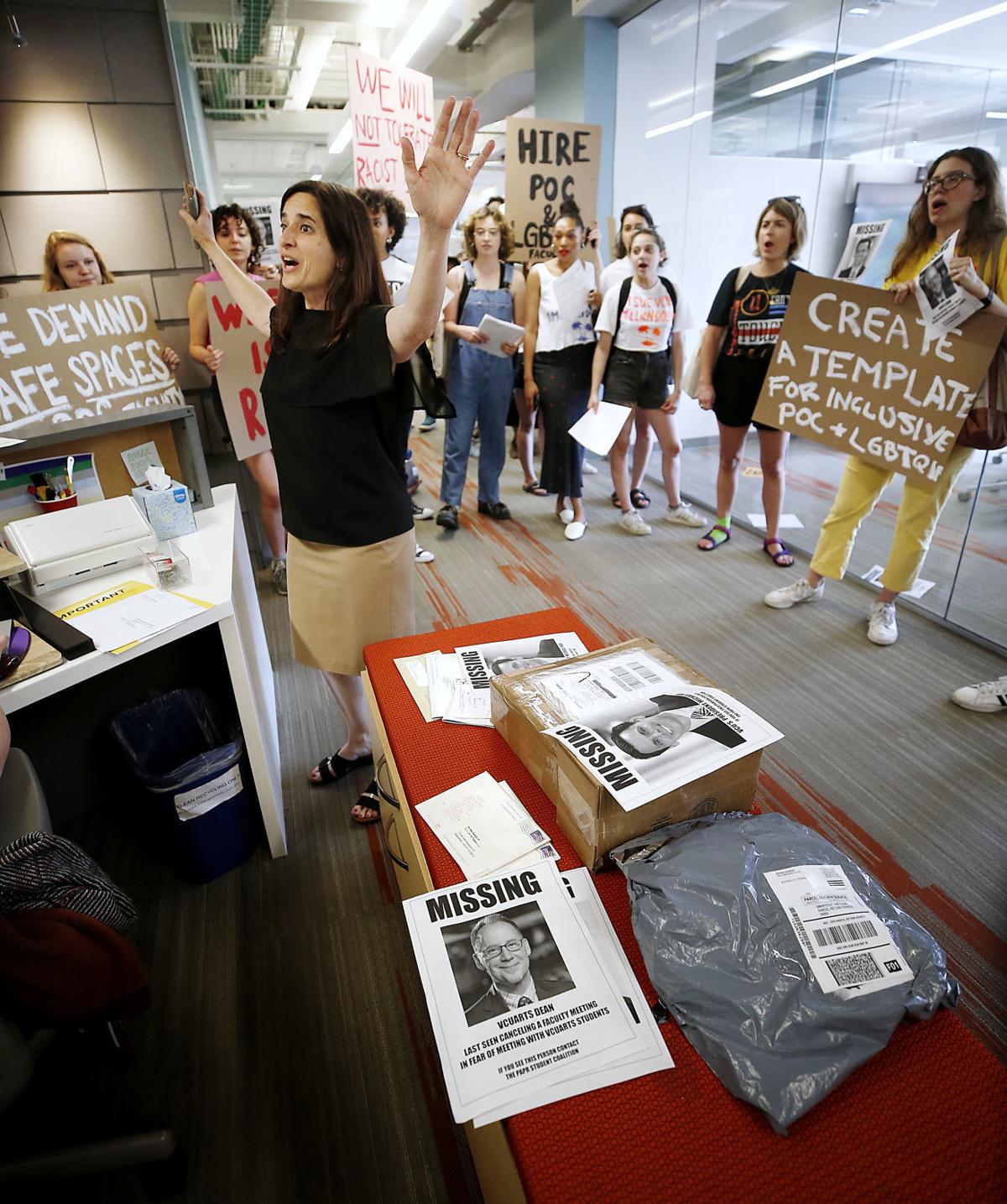 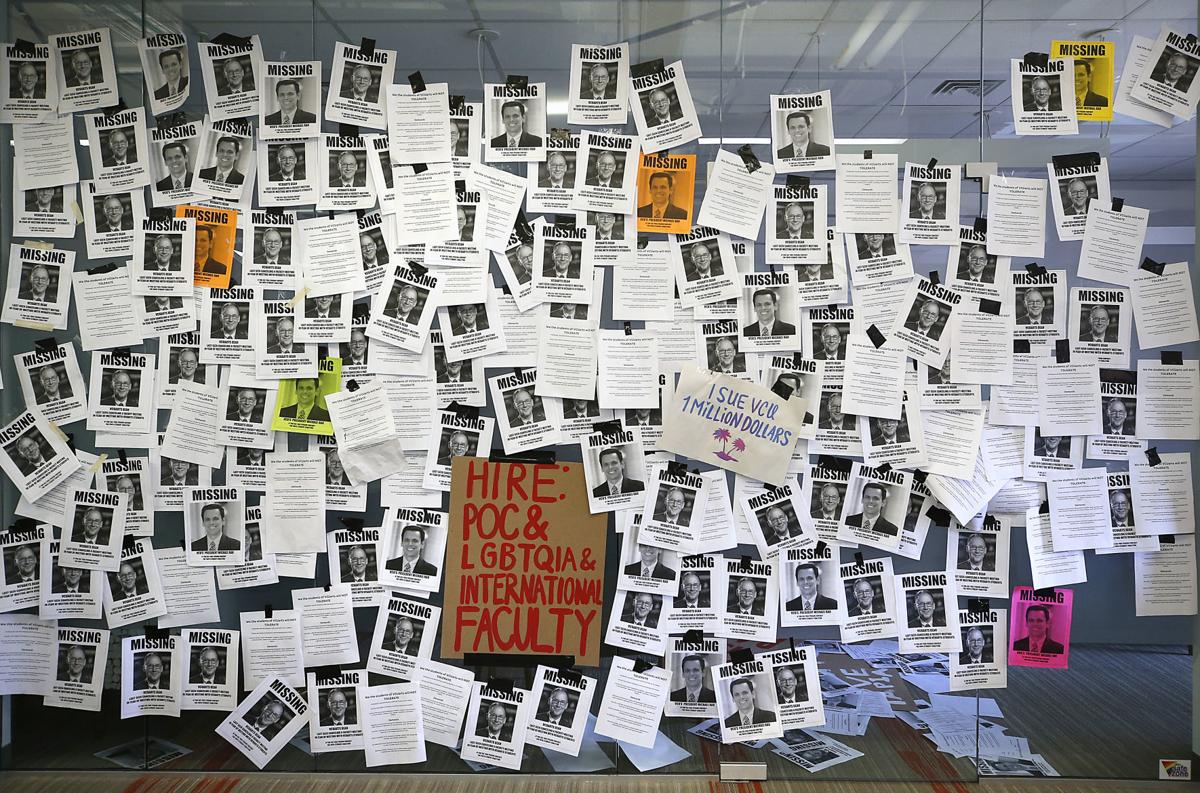 VCU students covered VCUarts Dean Shawn Brixey's office entrance with signs to protest the anticipated return of Professor Javier Tapia during a sit in Wednesday, May 1, 2019. 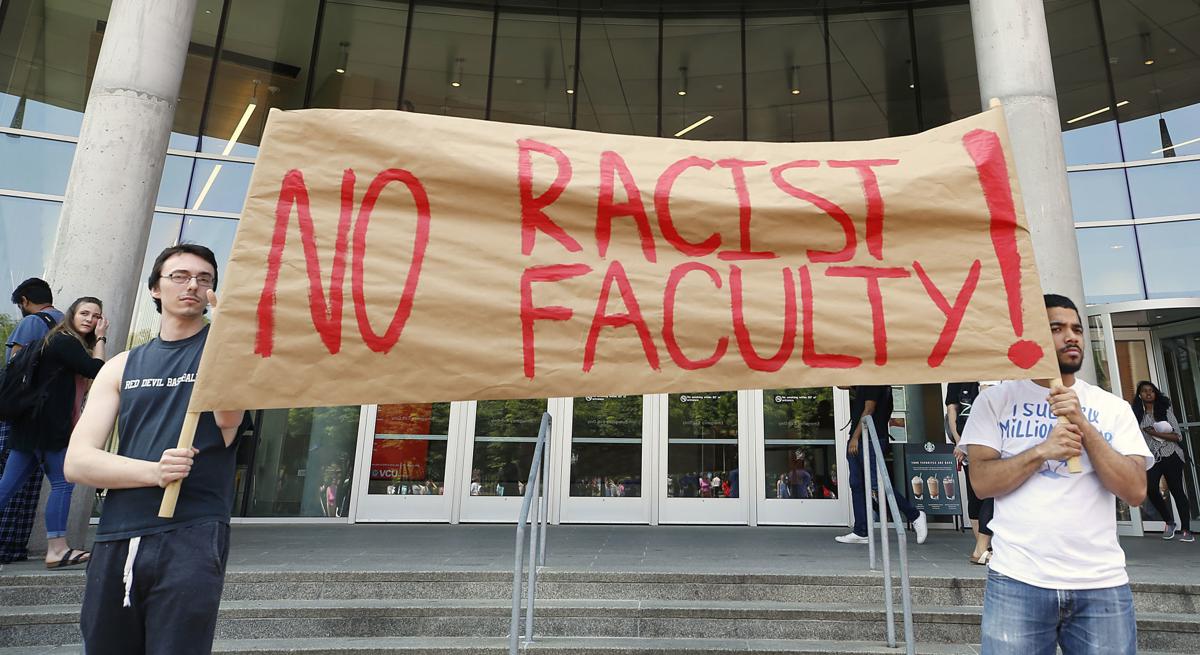 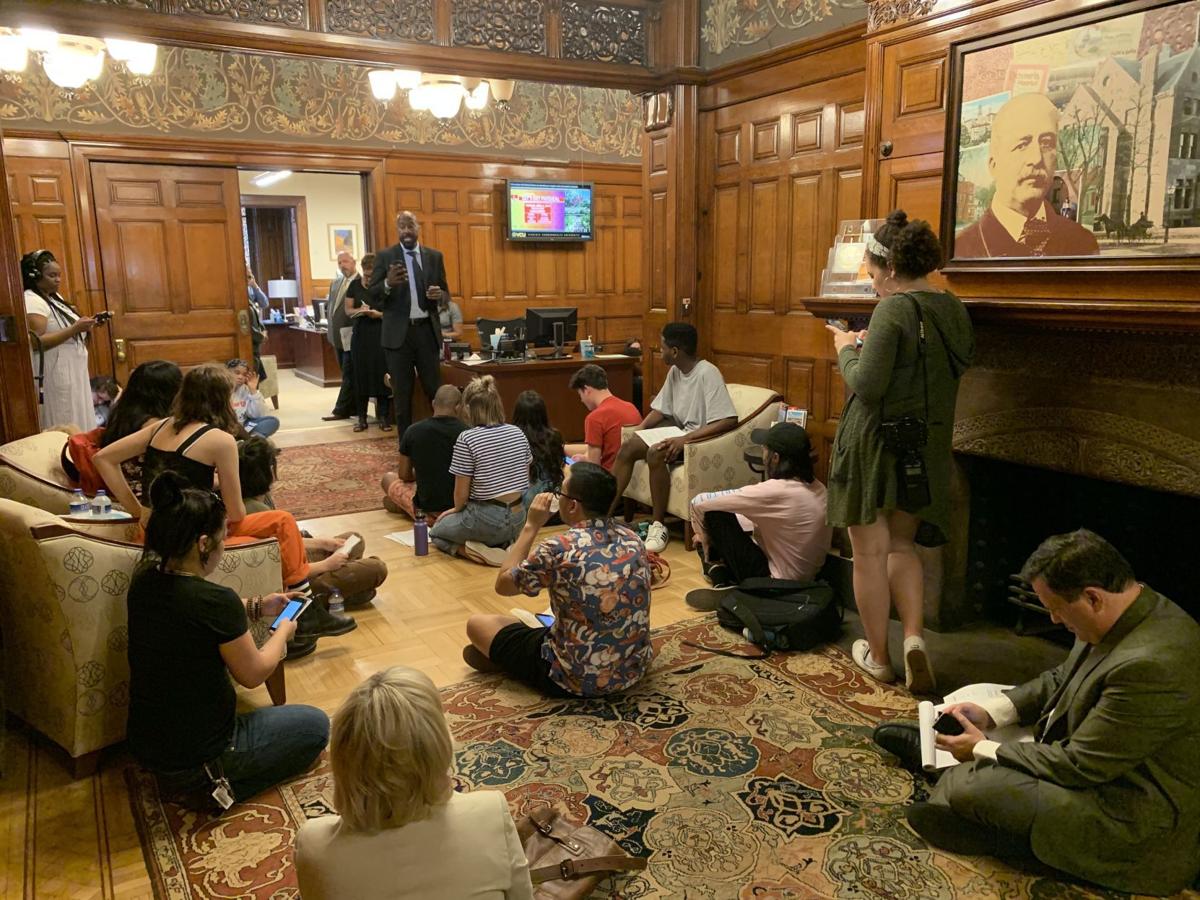 VCU Vice President for Inclusive Excellence Aashir Nasim speaks to students during a sit-in protest at the Office of the Provost on Thursday, April 18, 2019. Students are calling for the university to dismiss Associate Professor Javier Tapia and for systemic changes to the university following an incident last fall where Tapia called security on a black professor who was sitting in a restricted-access faculty lounge.

Virginia Commonwealth University officials suspended associate professor Javier Tapia last semester despite concluding that he did not racially discriminate against an unfamiliar black professor when he called security on her last fall. The decision prompted a lawsuit from Tapia and protests by students who want him fired.

Tapia, a Peruvian-born art professor who’s been at VCU since 1988, is heading to court in an attempt to force VCU to let him continue teaching while asking for $1 million in damages. A settlement conference is scheduled for June 11. Meanwhile, dozens of students have held campus protests to demand that Tapia be fired and that the school increase its diversity.

On Wednesday, a group of those students who don’t accept the university’s report held a roughly two-hour sit-in outside the office of School of the Arts Dean Shawn Brixey.

Visiting professor Caitlin Cherry submitted a racial discrimination complaint to university officials because Tapia asked a security guard to check on her as she was eating breakfast and working on her laptop in a restricted-access faculty lounge. In November, about a month after the complaint, a VCU investigation determined Tapia thought she was an undergraduate student who was not supposed to be there.

Tapia, according to a letter VCU sent him after the inquiry, told an official after the incident that he thought Cherry might be dangerous, but officials determined that wasn’t a reasonable conclusion based on her behavior. But it stopped short of declaring Tapia’s call to security the wrong decision.

“Whether your initiation of the security check, absent evidence that it was discriminatory, was reasonable or warranted under the circumstances is outside [the office of Equity and Access Services’] scope to determine,” the report says. “Professor [Cherry] also noted to the investigator that she has been mistaken for a student elsewhere based on her ‘youthful appearance.’ ”

Two days after Tapia received the letter exonerating him of the racial discrimination accusation, the university placed him on paid administrative leave, “pending a review of matters” brought to the university’s attention, according to additional documents attached to Tapia’s lawsuit against Brixey, President Michael Rao and Department of Painting and Printmaking Chairman Noah Simblist.

His suit alleges that VCU violated his First Amendment and due process rights by preventing him from communicating with students and faculty during his suspension and making him a “scapegoat” in the controversy that ensued after the School of the Arts informed students and faculty about the racial discrimination complaint soon after it was filed.

The letter VCU sent to Tapia notifying him of his suspension did not elaborate on what matters had come up. The suit says the university should have given Tapia a chance to defend himself and hear what other allegations might have come forward.

“What Tapia instead received was nothing less than a Kafkaesque stonewalling,” the suit says. “He was suddenly banished, with no due process whatsoever.”

VCU officials declined to answer questions about what led to his suspension and whether he remains on paid administrative leave. But the renewed protests in recent weeks were spurred in part by the release of fall semester class schedules, which show Tapia is expected to teach two undergraduate courses. The schedule also shows that Cherry will return for the fall semester and will be teaching two senior-level courses.

While the letter notifying him of his suspension says it is not a disciplinary action, a potential violation of the terms could result in punishment or job termination.

The suit asks the court to lift his suspension and gag order — and for $1 million in damages from Brixey and Simblist.

The incident initially led to student demands for his dismissal that have since evolved into calls for the university to hire more diverse faculty and staff.

Students are also demanding that the art school’s faculty diversify its lessons to include the artwork of people of color and varying gender identities, sexual orientations and nationalities.

Luis Vasquez La Roche, a graduate student pursuing his master’s degree in painting and printmaking, said he has been the victim of racial profiling and understands what it feels like. He said police have stopped him on his way to the grocery store and while locking his bike in front of his home.

Vasquez, who was born in Venezuela and identifies as black or Afro-Latino, believes Tapia — despite his Latino identity and Peruvian heritage — demonstrated a racial prejudice against black people when he called security on Cherry.

“It’s incredible to me that he called security on someone thinking it was an undergrad student. That’s my whole question — why call security on someone?” he said. “We all have to acknowledge the sensitive relationship between people of color and authorities.”

Oscar Contreras, a local Spanish-language radio host and former VCU student who traveled to Peru with Tapia and other students in 2006 for a class trip, said he believes the incident last fall was a “misunderstanding” that VCU mishandled.

“VCU said he didn’t do anything wrong, but they’re treating him like he did,” Contreras said.

Contreras, who is Guatemalan, said he can relate in some way to what Cherry must have felt when a guard approached her. But Contreras said VCU has prohibited Tapia from telling his side of the story.

Tapia and his lawyers did not respond to multiple requests for comment over the past two weeks.

Contreras said he believes students calling for Tapia’s removal are forgetting that Tapia, as an immigrant from Peru, has expanded the perspective of VCU’s faculty and challenged students as a tough critic and educator.

“I think the students aren’t seeing the whole picture,” he said. “They’re just buying into the narrative that’s been out there since the beginning.”

In an email Tuesday, Cherry said she supports her students and agrees that VCU must make its staff and faculty more diverse, and not just temporarily with visiting and adjunct professors.

“It may be a nice attempt to solve the problem short-term, but since we are not being fully supported by the institution, students are not able to get the level of access they truly desire from us,” Cherry said. “It also spawns the event that happened with associate professor Javier Tapia where he could not imagine a black woman as a colleague in his department and therefore called security on me.”

Vice President for Inclusive Excellence Aashir Nasim said the university does not have racial hiring quotas, but has been making an effort in recent years to promote diversity, per the university’s strategic plan.

Throughout the university, he said, the percentage of racial and ethnic minorities in the teaching and research positions increased to 34 percent last year from 30 percent in 2015 .

In response to Cherry’s criticism, Nasim said adjunct faculty are valued and “fulfill a vital role” at VCU.

“We expect adjunct faculty, as we do of all our teaching and research faculty, to reflect the dynamic, rich and vibrant diversity of their professions,” he said.

PHOTOS: Sit In at VCUarts

Students hold a sit in at the VCU Arts Pollak Building office waiting till VCU Arts Dean Shawn Brixey is reached by phone Wed., May 1, 2019.  …

VCU students held a sit-in Wednesday to demand that the school increase its diversity and that associate professor Javier Tapia be fired after an alleged incident of racial profiling.

VCU students covered VCUarts Dean Shawn Brixey's office entrance with signs to protest the anticipated return of Professor Javier Tapia during a sit in Wednesday, May 1, 2019.

VCU Vice President for Inclusive Excellence Aashir Nasim speaks to students during a sit-in protest at the Office of the Provost on Thursday, April 18, 2019. Students are calling for the university to dismiss Associate Professor Javier Tapia and for systemic changes to the university following an incident last fall where Tapia called security on a black professor who was sitting in a restricted-access faculty lounge.