VCU poll: Unvaccinated white Virginians, Republicans are the least likely to want a COVID shot
0 Comments
Share this
1 of 2 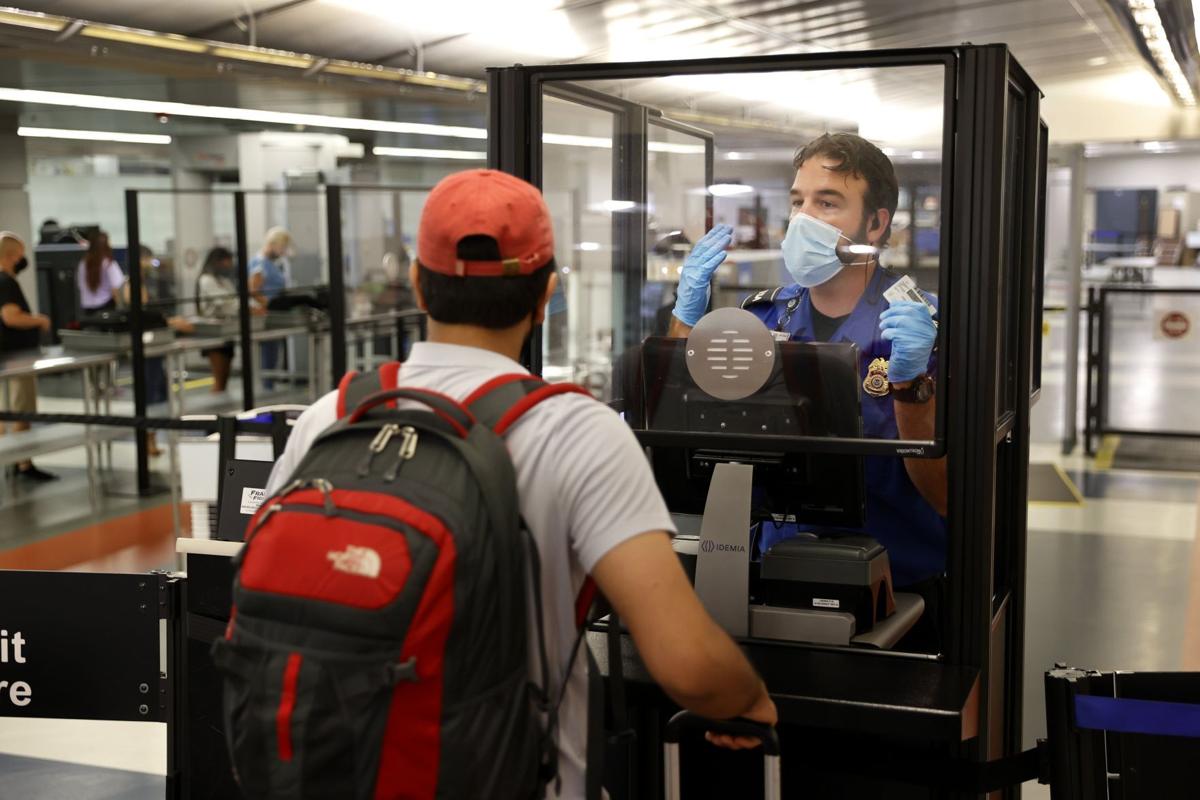 A Richmond TSA officer, standing behind a Plexiglas barrier, motioned for a passenger to pull his mask down for proper identification on Tuesday. Air travel is on its way back as vaccinations continue. 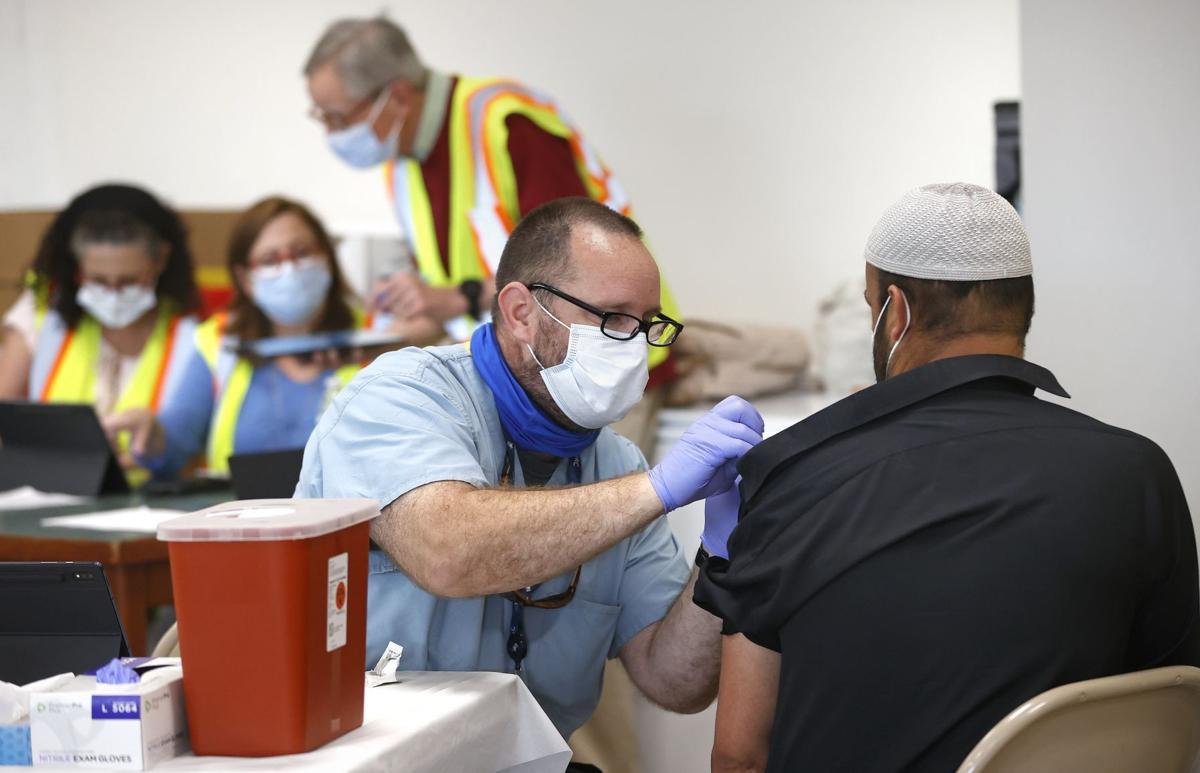 Jeffrey Sayles administered a COVID-19 vaccination at the Islamic Center of Henrico & Masjid Al-Falah in late April; 56% of Virginia is now fully vaccinated.

Unvaccinated white Virginians and unvaccinated Republicans are the least likely to want to receive a coronavirus vaccine, according to a 920-person survey released Thursday by VCU’s Wilder School.

Black and Hispanic residents who had yet to receive a dose were the most likely to say they would get one, though vaccination rates among Black Virginians continue to lag behind their share of infections and percent of the population as the highly transmissible delta variant continues to circulate.

On Thursday, less than a quarter of the state’s Black residents had been at least partially vaccinated compared with 60% of Indigenous people, 45% of Latinos, 27% of Asians and about 30% of whites, who account for nearly 1.6 million of first dose vaccinations. Almost 1.7 million shots do not have race and ethnicity recorded.

Statewide, there’s little variation in vaccination percentages between Black and white residents. Data from the Richmond City Health District shows that Black people account for the greatest percentages of cases, hospitalizations and deaths from the virus this past month.

Among surrounding counties, Richmond is the furthest from having 70% of its adult population partially vaccinated with 55%. Henrico County is at 70.4%.

With vaccination rates plummeting down to an average of 16,009 doses administered per day, it’s unclear when the city could reach herd immunity, or the point at which a large enough portion is immune that transmission of the virus becomes less likely.

Virignia Commonwealth University’s poll results found that the highest rates of vaccinations — where more than 80% reported receiving a shot — were residents in Northern Virginia, people 55 years or older, college graduates and Democrats.

More than 1 in 5 people in the 18-to-54 age range said they were not likely to get a vaccine. Among Republicans, 1 in 4 stated the same. Nearly half of white respondents reported that a major reason for remaining unvaccinated was feeling they did not need the vaccine. Only 16% of Black adults fell in this category.

A report from The Associated Press on Tuesday that analyzed available COVID-19 death data found that 98% to 99% of the 18,000 people who died in May were not vaccinated or had received only one dose.

Amy Popovich, nurse manager and community engagement lead at Richmond and Henrico’s health district, warned in a media briefing Thursday that people under the age of 30, while more likely to not be at high risk, can still be carriers.

“It’s really important that we’re vaccinating ourselves to protect ourselves but also the ones that we love, particularly as we’re unsure of what effect the variant will have as we head into the fall,” Popovich said.

A major ongoing concern among 87% of unvaccinated Black residents in the VCU poll was side effects, though paid time off or cash rewards were not influential enough to change their minds. Latinos were three times more likely than whites to say cash rewards would increase their willingness to get a shot.

About 56% of Black respondents cited “medical mistreatment in my community” as a major reason — more than five times the percentage of white adults.

Still, at over 60%, Black parents are the most likely to say they’d vaccinate their children when a vaccine becomes available. The average among all respondents was 59% for parents with kids between the ages of 12 and 15 and 53% for those with children 11 and under.

White parents fell below that average, with only 44% saying they’d vaccinate their children below the age of 11. An extended emergency use authorization for Pfizer’s two-dose vaccine to include this age group is expected in September, when most school years are underway.

Data from the Centers for Disease Control and Prevention released last Friday monitoring hospitalization rates by age, race and ethnicity found that in the 0-to-17 age group, Black and Latino kids were at least three times more likely than whites to be hospitalized with the virus.

More than 70% of the multisystem inflammatory syndrome in children, a rare but severe illness that can occur in children who contact the virus, were among Black and Latino kids, according to the CDC.

The Virginia Department of Health has recorded 75 total cases, but demographics aren’t available. Of the 2,587 infections linked to variants statewide, however, nearly a quarter are among people under the age of 20.

Nineteen of the 48 cases caused by the delta variant, nearly 40%, are among Asian Virginians. Overall, whites account for 51% of all variant infections.

Popovich urged people on Thursday to think about getting vaccinated before fall to ensure the highest level of protection for students. She added that the health districts will be launching educational town halls to help bridge the information gaps.

More than half of Black residents in VCU’s survey acknowledged that knowing more about how the vaccines work would help in their decision making.

A Richmond TSA officer, standing behind a Plexiglas barrier, motioned for a passenger to pull his mask down for proper identification on Tuesday. Air travel is on its way back as vaccinations continue.

Jeffrey Sayles administered a COVID-19 vaccination at the Islamic Center of Henrico & Masjid Al-Falah in late April; 56% of Virginia is now fully vaccinated.