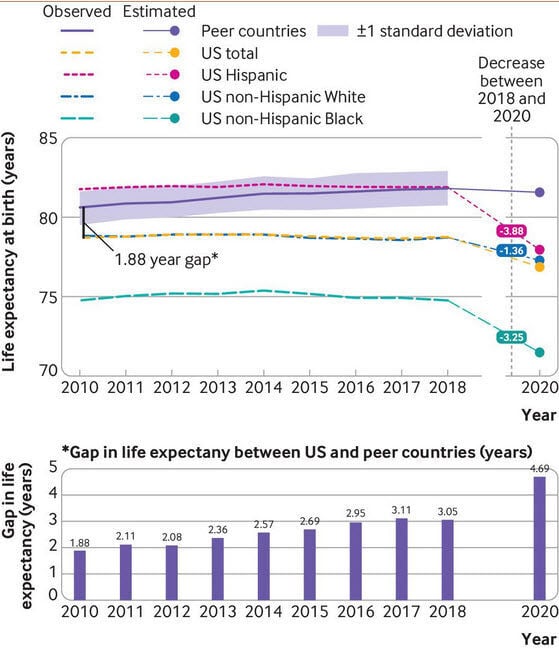 Life expectancy at birth in the United States, by race and ethnicity, and in peer countries, for years 2010-18 and 2020. Data obtained from the National Center for Health Statistics, US Census Bureau, and Human Mortality Database. Data for 2019 could not be calculated because life table data were unavailable for many peer countries 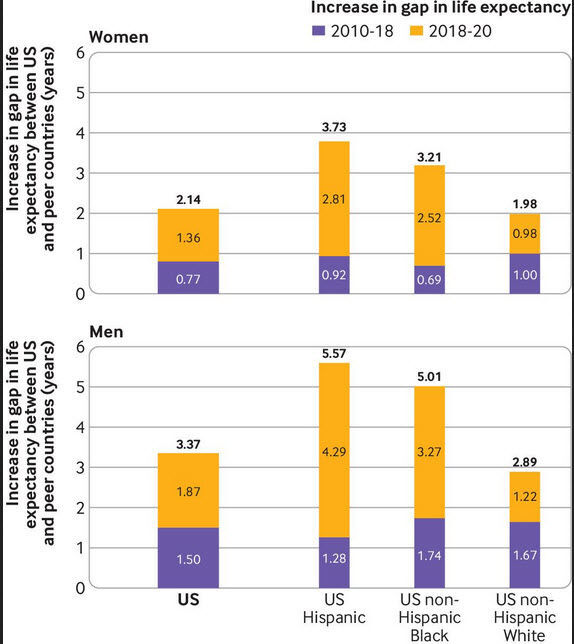 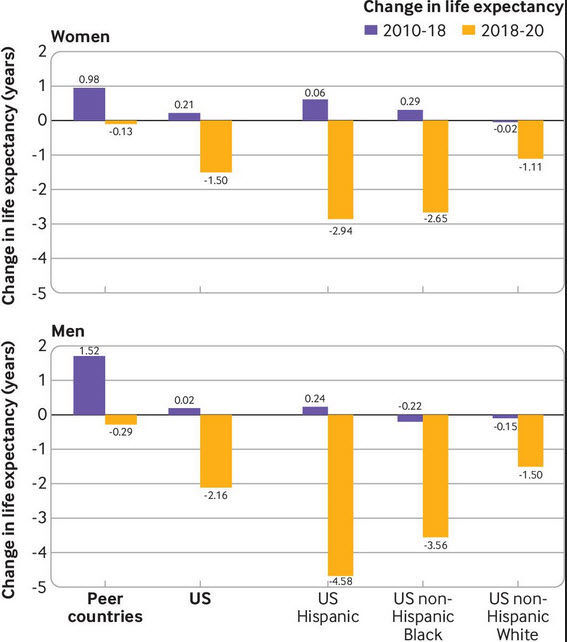 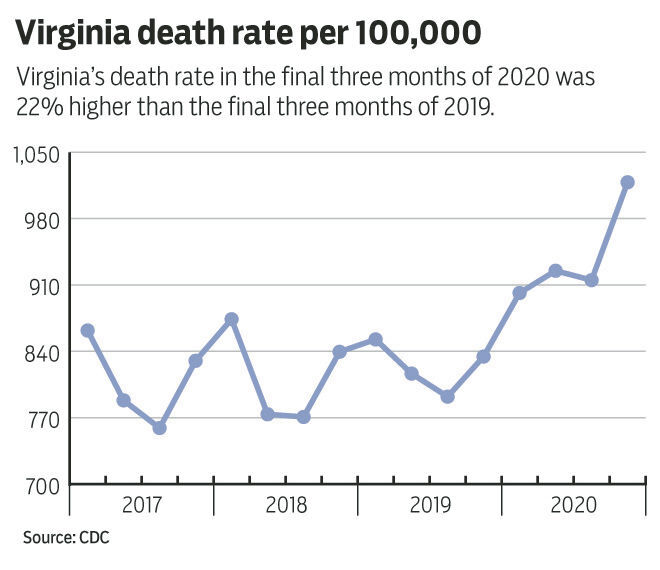 Most of the Rev. Shay Auerbach’s congregation has yet to celebrate half a century of being alive.

But hundreds of people — sometimes entire families — contracted the coronavirus. More than a dozen died, and countless others are mourning their siblings and parents who died in other countries.

The grief has permeated the largely Latino and immigrant population at Sacred Heart Catholic Church in Richmond’s South Side so deeply that Auerbach isn’t sure when the last memorial service was.

“There have been so many,” he whispered. They haven’t stopped.

In a year of upheaval, job and housing insecurity and severe emotional tolls, Auerbach had feared the pandemic’s ripple effects on a community whose last year was stacked with trauma.

In the largest decline since World War II, life expectancy in the U.S. dropped between 2018 and 2020 by almost two years, to 76.9. Black and Latino communities saw the greatest loss.

The average life of a Black resident fell 3.25 years. For Latinos, it fell by almost four years.

Residents in other high-income countries are living an average of five years longer than those in the U.S., but the findings were even more devastating among Black and Hispanic women, whose decline was 20 to 23 times greater than women in similarly developed nations.

Black mothers are already 4 to 5 times more likely to die pregnancy-related deaths than white people, a disparity linked to bias in health care and limited access to high-quality medical services. Black infants have the highest mortality rates in the U.S. at nearly 11%, followed by Native Hawaiians, Alaska Natives and Hispanics, according to the Centers for Disease Control and Prevention.

Data on Indigenous and Asian populations was not analyzed due to a lack of information, though both groups have experienced high COVID-19 case and death rates throughout the pandemic.

But the numbers available were “jolting,” said Dr. Steven Woolf, director emeritus of VCU’s Center on Society and Health and the lead author of the study published in The BMJ, a peer-reviewed medical journal.

Woolf said the pandemic is among the greatest factors, having claimed 600,000 American lives. But he estimates thousands more have died because they could not receive treatment, triggering a crisis of excess deaths.

“Research like this really underscores the need to get serious about tackling systemic racism,” he said. “It’s baked into our history.

“The barriers people of color face today were set in motion by policy decisions made generations ago.”

In Richmond, one of the most segregated cities in Virginia across racial and socioeconomic lines that continues to reel from Jim Crow-era housing policies, COVID-19 cases were largely concentrated in Black and Latino neighborhoods. As a result, people often came to Pastor Auerbach with the same desperate pleas.

“I want my family to survive,” they would tell him.

Congregants didn’t have flexibility in terms of employment, Auerbach said. They couldn’t work from home, there was no paid sick leave or health insurance, and people were in construction and service industry jobs where wages were based on the number of hours worked. Then those were cut, too.

Latinos also had the highest unemployment rate in 2020, according to the Bureau of Labor Statistics, and with health care often tied to a job, that means possible skipping or delaying trips to the doctor or not being able to afford medication.

All are factors that affect length of life.

“There was just panic. And paralysis, too,” Auerbach said. “I think it hit in a way that in other communities, it didn’t. ... People couldn’t be connected to what gave them strength.”

Auerbach said the church is focusing on offering further mental health support in the upcoming months to help. The World Health Organization estimates people with severe mental health issues have a 10- to 25-year life expectancy reduction. Reports of increased depression and anxiety — largely linked to food, housing and job insecurity — were highest among Black and Latino adults in 2020, according to Kids Count Data Center, which collects state data on children and families.

Then there’s the worrisome increase in deaths among the 25-to-64 age group that caused a prior plateau or decline in U.S. life expectancy in the 2010s: drug overdoses, alcohol abuse, suicide, and chronic medical conditions such as diabetes and high blood pressure.

Auerbach has seen that aggravated, too, calling it “witnessing the tip of the iceberg.”

Accidental overdoses in Virginia between April 2020 and March 2021 increased more than 50% to 2,334, and homicides rose 26% in 2020 to 541, said Rosie Hobron, a forensic epidemiologist for the state Department of Health. Both statistics mirror national trends. The opioid addiction crisis was declared a public health emergency in Virginia in 2016.

For years, overall Black life expectancy in the U.S. had increased. Then the pandemic wiped out decades of progress, and life expectancy for Black men fell to the lowest rate since 1998. Latinos, who previously had longer average life spans than white residents, saw their advantage almost completely disappear.

Access to resources, such as education, medical care and jobs, and addressing income inequities would all have measurable effects on reversing the decline, Woolf said — especially since income also influences where individuals live.

Even prior to the pandemic, life expectancies within Richmond have varied.

The area surrounding Sacred Heart Catholic Church in South Richmond has a life expectancy of 67. In Mosby Court, a public housing community, the average life span is 68. Less than 6 miles away, a person born in the primarily white and affluent Windsor Farms neighborhood will live an average of 84 years, according to recent Virginia Department of Health data.

The Massey Cancer Center is conducting research in Richmond to determine which neighborhoods are at the highest risk for cancer, which is tied to a slew of long-standing health inequities.

Kathy Tossas, a Massey professor who researches health disparities, said that while researching health equity isn’t a new concept, the pandemic might be a turning point.

During the pandemic, fewer people were screened for and diagnosed with cancer, a fact experts fear could cause the cancer death rate to rise for the first time in decades. From 2012 to 2017, Black people were the most likely to die from the disease.

Tossas noted how the murder of George Floyd and the death of actor Chadwick Boseman to colon cancer at age 43 have changed the way some people think about the link between a person’s background and their health.

“I hope this means our eyes have been opened,” Tossas said.

In 2020, Bliley’s Funeral Homes performed about five funerals a day throughout the Richmond area, a 10% increase from the year before, said Carey Bliley, president. Bliley’s gave its staff an extra week of vacation to try to cope with the emotional weight.

Early in the pandemic, funeral capacity was limited to 10 participants, changing how survivors grieved. Livestreaming became the norm.

“The lack of being able to do rituals took a huge toll on a lot of people,” Bliley said.

In Virginia, the death rate for the final three months of 2020 was about 20% higher than the same three months in 2019, according to data from the CDC.

Woolf fears that life expectancy won’t immediately recover and the aftermath will be felt for years.

In addition to the long-term effects caused by COVID-19, loss of health insurance, food insecurity and housing instability — all things that worsened during the pandemic — have an effect on length of life.

People who were unemployed in 2020 may have skipped trips to the doctor or decided they couldn’t afford their prescription medicine. The opioid epidemic continues to afflict people.

Hobron said that to curb the rush of drug overdoses, authorities need to deflate the amount of fentanyl laced into or disguised as other drugs. Fentanyl is responsible for most overdoses, and its users are seemingly taking it accidentally.

And health care institutions need to put out their hand to their nearby communities, Tossas said. Clinics and trials need to be placed where the most vulnerable people can reach them. Screenings need to be made available to the uninsured and underinsured.

Life expectancy was already lagging before the pandemic began.

“What we’re reporting here is a pretty serious crisis,” he added. “If we get life expectancy back to 2018, we’re still in a very bad place.”

Deaths in the U.S. rose 23% because of the pandemic, VCU study finds

The death rate in the United States is 20% higher than expected. But only two-thirds of those deaths were caused directly by COVID-19.

Life expectancy at birth in the United States, by race and ethnicity, and in peer countries, for years 2010-18 and 2020. Data obtained from the National Center for Health Statistics, US Census Bureau, and Human Mortality Database. Data for 2019 could not be calculated because life table data were unavailable for many peer countries