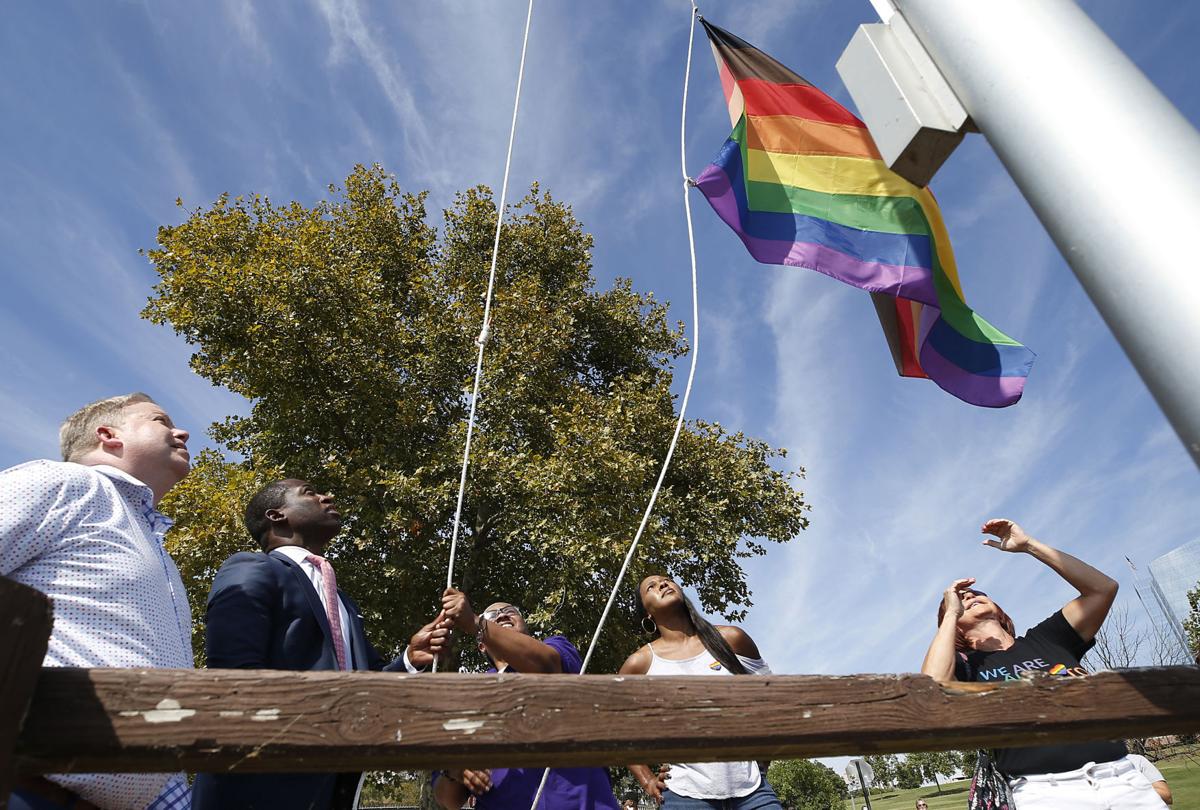 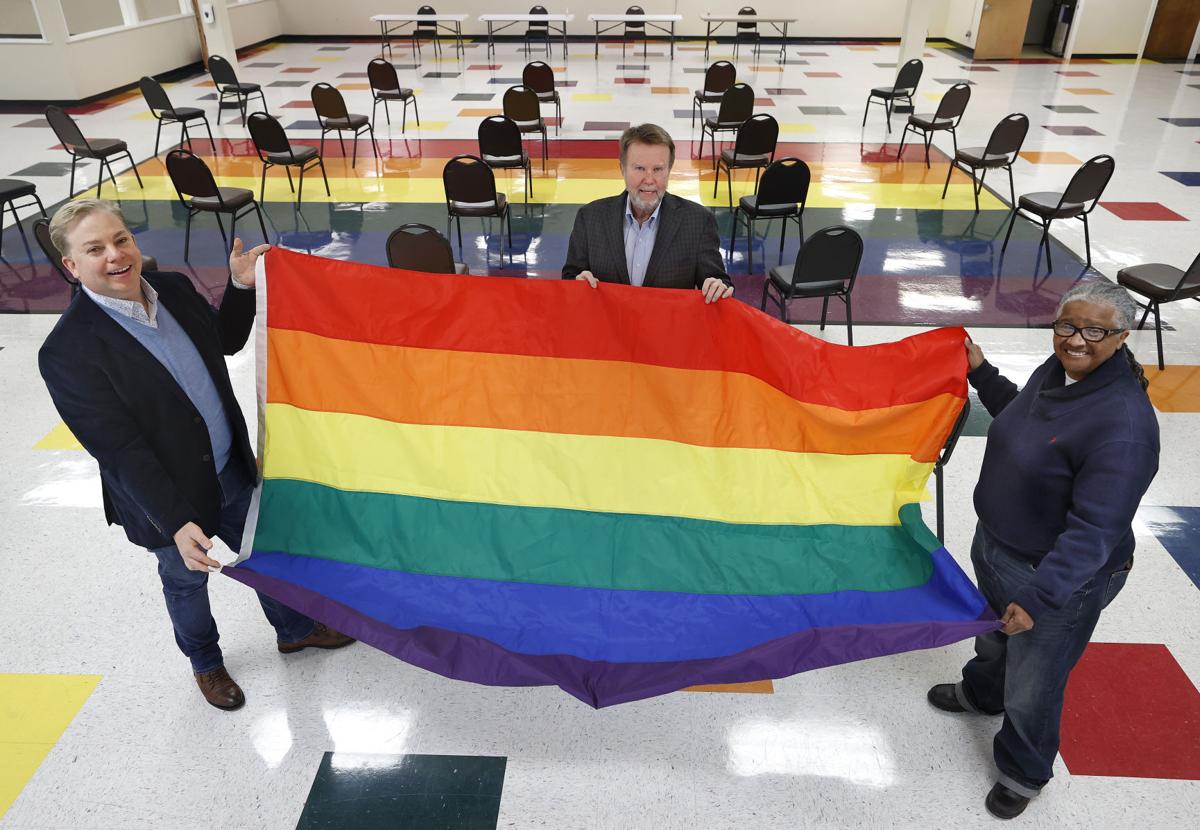 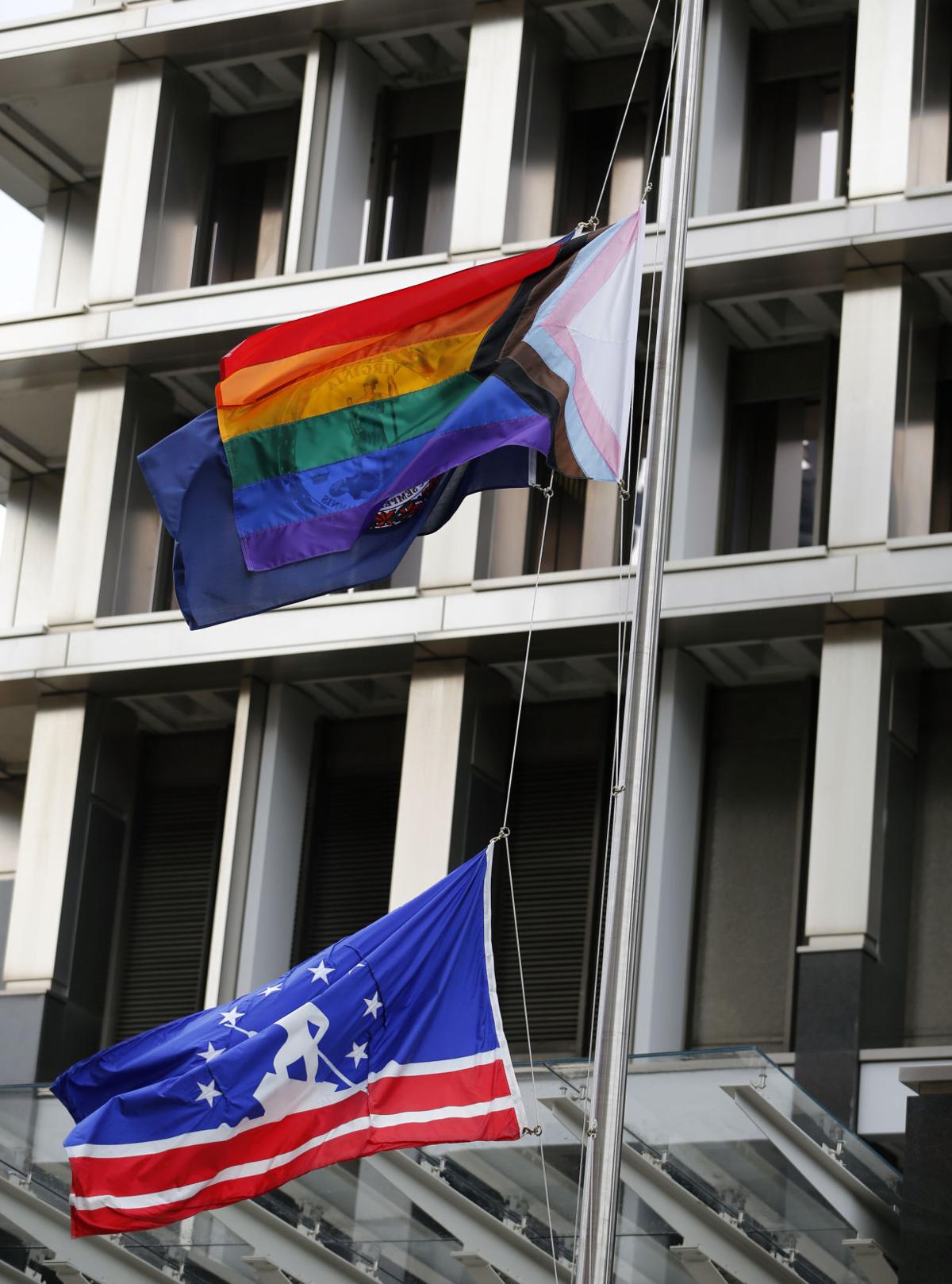 The Pride Flag flies right beside the Virginia State Flag on a pole outside City Hall in Richmond, VA Friday, Sept. 25, 2020.

When Meredith’s son, who is transgender, started his freshman year at Henrico High School in 2017, Meredith emailed his teachers asking them to use his preferred name and pronouns. She said the teachers were more than willing to comply.

However, getting his name changed in the school’s online system was a little more challenging, said Meredith, who asked that only her first name and her son’s first initial, “E,” be used for privacy reasons. There were hiccups along the way — the school would not update his name in the system before it was legally changed.

His dead name — a birth or former name of a transgender or nonbinary person — would pop up on school-related Google Docs. Substitute teachers would call out his dead name that was on the official roll call. It would feel like he was outed every time.

Henrico County Public Schools has a nondiscrimination policy on its website, which includes prohibiting discrimination based on gender and gender identity. Students who are transitioning can work with school administrators to complete a name change process, a school spokesperson said.

Within the past few years, Virginia has worked to establish more LGBTQ protections in health care and criminal justice, such as the banning of the gay panic defense — a legal strategy a defendant can use to claim the victim’s sexual orientation or gender identity led them to commit assault or murder. That bill was introduced by Del. Danica Roem, D-Prince William, the first transgender person to be elected in the General Assembly.

At the direction of General Assembly legislation passed in 2020, transgender students in public school classrooms will have increased protections come the fall. The Virginia Department of Education has created model policies that are inclusive of transgender and nonbinary students. Virginia school districts must adopt the guidelines by the fall.

E, who has recently graduated, was scared to use the restroom that aligned with his gender identity and did not have access to a one-person restroom. Yearbooks would only use legal names, so many transgender kids at the school would have dead names under their photos, Meredith said.

E would correct his teachers if they used the wrong name or pronouns. His name was legally changed in October 2017. Meredith said it took about a month of calling the school registrar to have his name updated in the system, but she does not want kids to go through what E went through.

E is just one of many transgender students in Virginia who faced these challenges. According to the Williams Institute, a think tank at the University of California, Los Angeles School of Law, there are 4,150 transgender teenagers in Virginia, based off a population size of nearly 10% of teens between the ages of 13 and 17.

Equality Virginia, a Richmond-based nonprofit that advocates for LGBTQ equality statewide, has been putting in work for the past decade for schools to have anti-discrimination policies in place.

Lamneck said studies show that when these policies are put in place, “discrimination, and bullying and harassment actually go down and not only that, but transgender students feel safer in their schools and that has really positive consequences.”

As the policies were issued, pushback began. On March 29, Christian Action Network, a faith-based organization, filed a motion with the Circuit Court of Lynchburg requesting the VDOE guidelines be postponed.

In Richmond, the Family Foundation of Virginia, the Founding Freedoms Law Center and a Hanover County parent filed a lawsuit in Richmond City Circuit Court in March. The two lawsuits have since merged, Lamneck said.

Christian Action Network says the model policies violate First Amendment rights of free speech and religion of its supports and others, according to the lawsuit.

When reached, Christian Action Network founder Martin Mawyer declined to comment past what the lawsuit states.

The lawsuit comes as a growing number of states are passing anti-LGBTQ legislation that seeks to limit protections, many targeting LGBTQ youth.

More than 250 anti-LGBTQ bills have been introduced in state legislatures in 2021, including bills forcing transgender students to join school sport teams that do not align with their gender identity or bills restricting trans minors access to medical care. Most of the bills come from Arkansas, Montana, Texas and Tennessee.

In June, the U.S. Supreme Court declined to hear a request from the Gloucester County School Board to review a lower court ruling that overturned its policy prohibiting trans students from using restrooms aligned with their gender identity, which was first challenged by Gavin Grimm in 2015.

The Christian Action Network lawsuit is disappointing yet not surprising, said Shannon McKay, president of He She Ze and We, a Richmond-based peer-to-peer support nonprofit for adult caregivers of transgender and nonbinary family members. The nonprofit signed on to the amicus brief to support the families who spoke out in the brief, she said.

McKay said the lawsuit sends misconceptions about the trans community, adding the policies not only let trans students have a safe and welcoming learning environment, but to simply exist.

“It’s basically letting trans students have the access to what everybody else has access to, which is equal rights,” McKay said. “It is the right to exist in public schools in all activities that they offer.”

Lamneck said the pushback against the policies are “misinformed” and that the guidance when put in place will have positive outcomes for all students.

“The impact is great for the entire student body, and that’s what we want at the end of the day, to have a thriving student body where everyone can succeed no matter their sexual orientation or their gender,” Lamneck said.

The amicus brief details accounts of discrimination, isolation and physical violence that transgender students and their families have faced in various Virginia public school systems.

One student, who lives in the area of Fairfax and Loudoun counties, identified as “T” in the brief, changed middle schools three times and briefly lived with her aunt in another state after being bullied and not having her new name honored in the yearbook or on substitute rosters, the brief states.

At the beginning of the student’s social transition, she wore wigs to her elementary school. According to the brief, the student was asked to stop playing with her wig or she would be asked to remove it and a teacher allegedly told her “she was not allowed to wear Halloween costumes to class.” One day, her wig fell off on the playground, leaving her humiliated and writing suicidal notes, the brief states.

In middle school, the student felt isolated and scared after being cornered in a bathroom by three adults, including a school resource officer, the brief alleges. She eventually attempted suicide.

In Charlottesville, one student’s transition process went well in the beginning, as his name and pronouns were respected, he had access to a gender-neutral bathroom, and he could dress how he wanted. But when returning for eighth grade, the student was bullied, allegedly being “violently assaulted” by a student, the brief states. He was home-schooled the remainder of the year.

At the start of his freshman year of high school this past year, the student, identified as “G,” legally changed his name and gender marker and it was acknowledged by his classmates and teachers. He even joined the boys tennis team.

Trans youth already go through many adversities, including anxiety and depression, Meredith said. The model policies will make trans students’ lives a little easier, she added.

“I don’t want any kids to have to go through fighting against something that’s so simple,” she said. “All we are asking is that our kids get treated like everybody else.”

The Pride Flag flies right beside the Virginia State Flag on a pole outside City Hall in Richmond, VA Friday, Sept. 25, 2020.