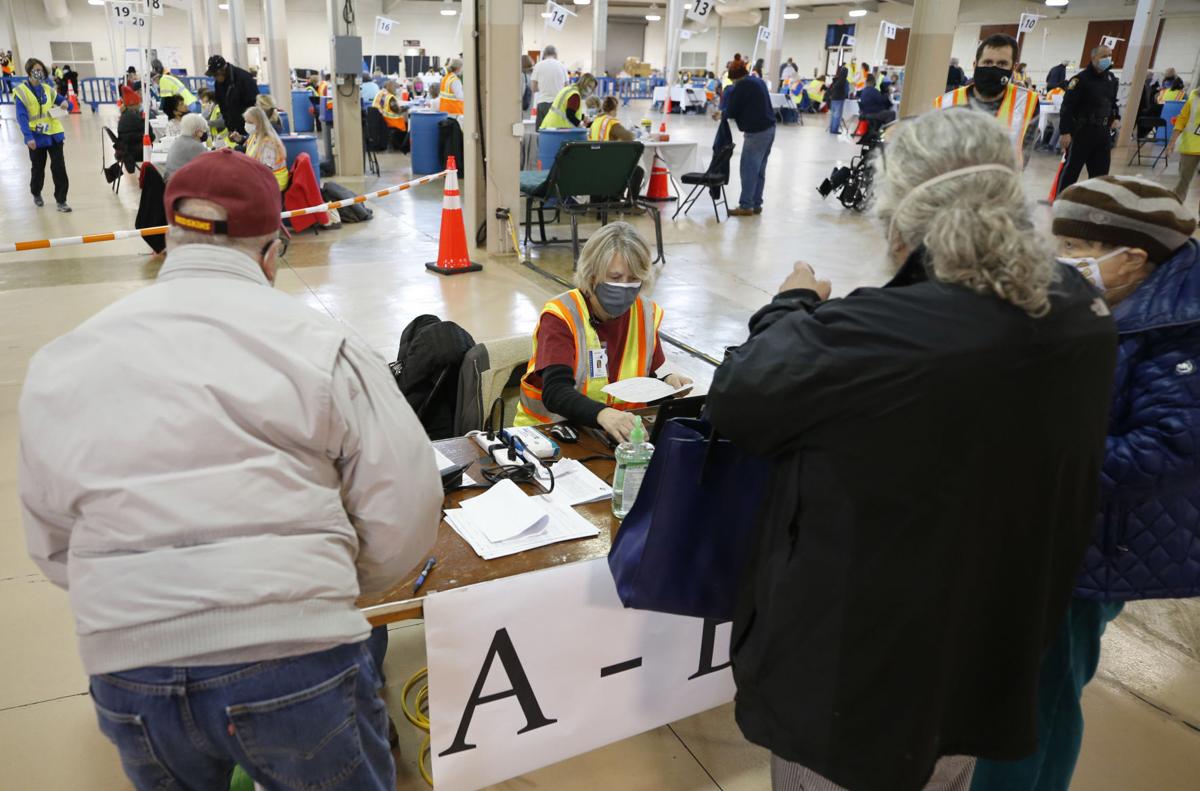 Richmond-area senior citizens received their first dose of a COVID-19 vaccine during an event at Richmond Raceway earlier this month. 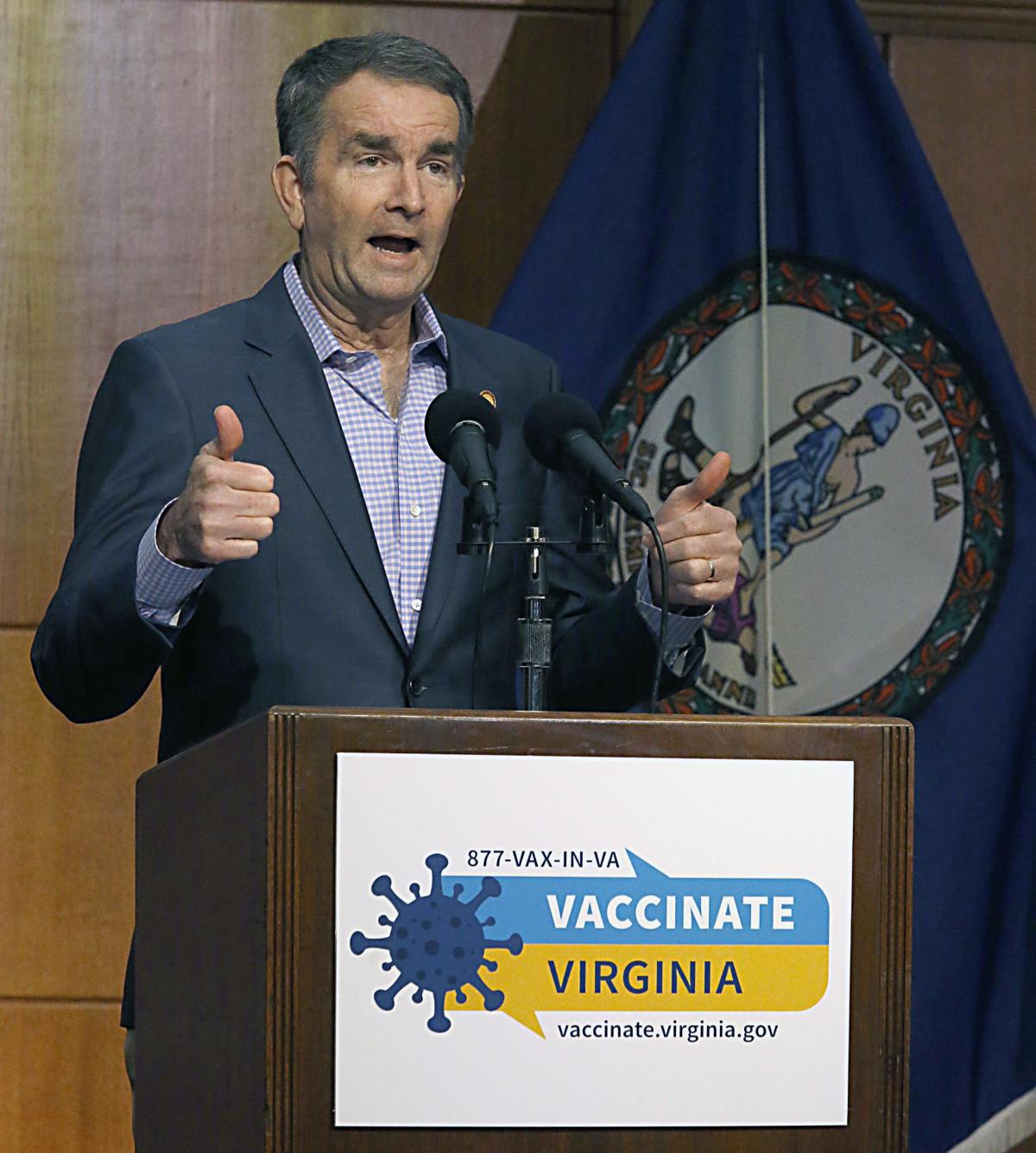 Virginia Gov. Ralph Northam gives a thumbs up as he addresses the public and the media while talking about the new website for Virginians to sign up for the COVID-19 vaccination during a press conference at the Patrick Henry Building in Richmond, VA Wednesday, Feb. 17, 2021.

The Virginia Department of Health is finalizing details that would adjust how the state distributes its vaccines, giving more weight to localities with higher rates of COVID-19 hospitalizations and deaths among Black and Latino residents ages 65 and older.

The announcement comes as Virginia’s seven-day average of new COVID-19 cases has been decreasing every day for more than a week straight. It’s the first time this has happened since June.

The shift away from the current population-based model will likely not go into effect for a few weeks, said Dr. Danny Avula, the state’s vaccine coordinator, in a media briefing Friday.

The plan is among the latest steps taken by Virginia to bake equity into its vaccination policies on the state level.

In recent weeks, about 50% of the state’s supply has been allocated for populations 65 and up and roughly 10,000 doses channeled specifically toward trusted clinics in neighborhoods with older Black residents.

While the virus’s death toll has begun to trend downward, Black Virginians are dying from COVID-19 at 1.2 times the rate of white residents when adjusted for population, according to the COVID Tracking Project. Latinos are being infected at more than double the rate of whites. In October, the rate was five times higher than whites.

Yet national data has revealed vast disparities between where the virus has devastated communities and where shots are given. In Virginia, white residents are getting vaccinations at 2.2 times the rate of Black residents.

Factors include a history of discriminatory lending practices that pushed these populations into areas with less access to health care, limited internet and a lack of transportation. All of that is on top of navigating a fractured health care system that’s in many ways shut them out.

While the vaccine supply has increased to about 161,000 doses per week, Avula said health directors have voiced concerns that having more vaccines doesn’t guarantee that they’ll be given to the right populations.

“So in addition to ensuring that vaccines are going to communities that have a higher rate of vulnerable residents, we’ve also got to make sure that we have the right partners at the table,” Avula continued. “Whether that’s the right vaccinating partners or the right community engagement partners.”

A federal vaccination program that increases supply to community health centers — which is an additional allocation of doses headed toward Virginia — will help in these efforts due to pre-established relationships in hard-hit areas, Avula said.

Some experts have raised concerns that age-based vaccine prioritization — even in a pandemic where 75% of Virginia’s deaths are among those 70-plus — fails to account for lower life expectancies among Black and Latino communities.

In Richmond, where VDH reports that the majority of cases, hospitalizations and deaths are among Black and Latino people, ZIP codes with majorities of these populations have life expectancies ranging from 63 to 69 years old.

More affluent and white neighborhoods have an average life expectancy between 77 and 83 years old, according to a 2015 Virginia Commonwealth University study from the Center on Society and Health.

Other states, such as California, have used ZIP codes and census tracts to identify where to send vaccines and set up clinics. Texas, however, threatened to cut off vaccine supply to counties choosing to follow suit.

In Virginia, this has largely been left up to localities. The Richmond and Henrico County health districts began implementing similar measures in February and allocated roughly 8,000 doses for mobile and pop-up vaccination clinics in Richmond’s South Side, East End and North Side.

Avula said in the media briefing that the methodology will be by locality, but it’s unclear for now what the guidance for each health district will look like.

The average number of new COVID-19 cases over a seven-day period in Virginia has trended downward for more than a week straight. The state has not seen a trend like this since mid-June.

While Virginia is seeing 2.5 times the daily case average from June, with 2,246 cases, it’s dropped since last month’s 6,161. The state case average in mid-June was fewer than 900.

Also slowing down is the percentage of people testing positive for the virus, which dropped to 8.2% on Friday. Hospitalizations are falling in concert, according to the Virginia Hospital and Healthcare Association.

The state saw a 157-patient decline from Thursday to Friday, and a total of 1,671 people are currently hospitalized for virus-related reasons. The same day in January had 2,429.

While still high, the numbers are inching back toward reports from November, the month another surge began. Steady progress in driving down case numbers and hospitalizations has swept the U.S. in the past few weeks, but health officials expect circulating variants could result in another surge.

There are at least 11 cases of the United Kingdom variant in Virginia.

This could become the dominant strain by March and shift the state’s course once again unless vaccinations ramp up.

Virginia has administered more than 1.5 million vaccines. At least 300,000 were in the last week.

Nearly 1.1 million people have received at least one dose, which is almost 13% of the state population and nearly double Virginia’s total caseload of 559,930.

A peer-reviewed study published Thursday in The Lancet, a medical journal based in London, found that the first dose of the Pfizer vaccine proved to be 85% effective against the virus within two weeks to a month.

Of the vaccine shipments allotted for first doses, almost 100% have been administered, according to the Virginia Department of Health website. This is a 7% jump from last week.

Richmond-area senior citizens received their first dose of a COVID-19 vaccine during an event at Richmond Raceway earlier this month.

Virginia Gov. Ralph Northam gives a thumbs up as he addresses the public and the media while talking about the new website for Virginians to sign up for the COVID-19 vaccination during a press conference at the Patrick Henry Building in Richmond, VA Wednesday, Feb. 17, 2021.