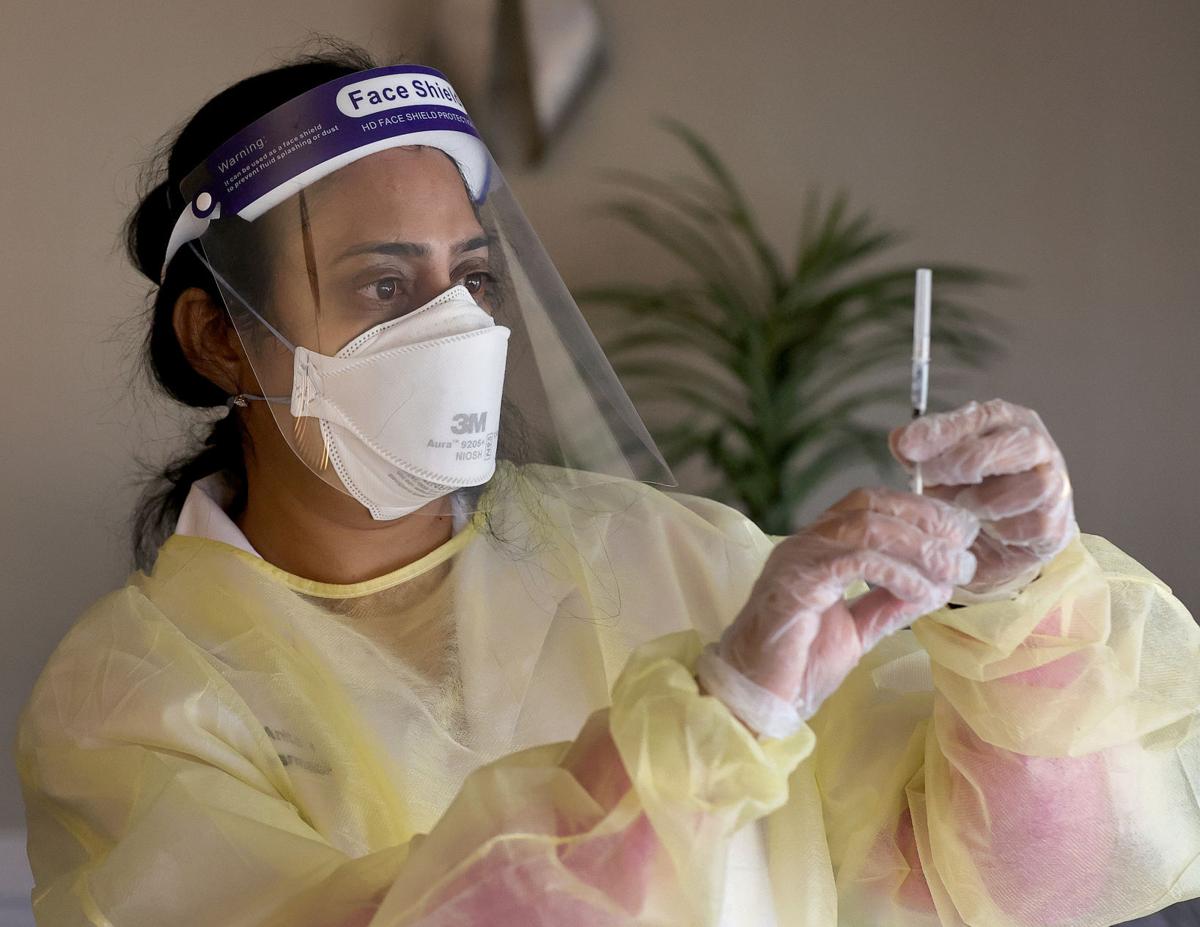 Anita Paleti, a pharmacist of Walgreens, gets ready to give COVID-19 vaccination to staff at Westport Rehabilitation and Nursing Center in Richmond, VA., on Wednesday, December 30, 2020. 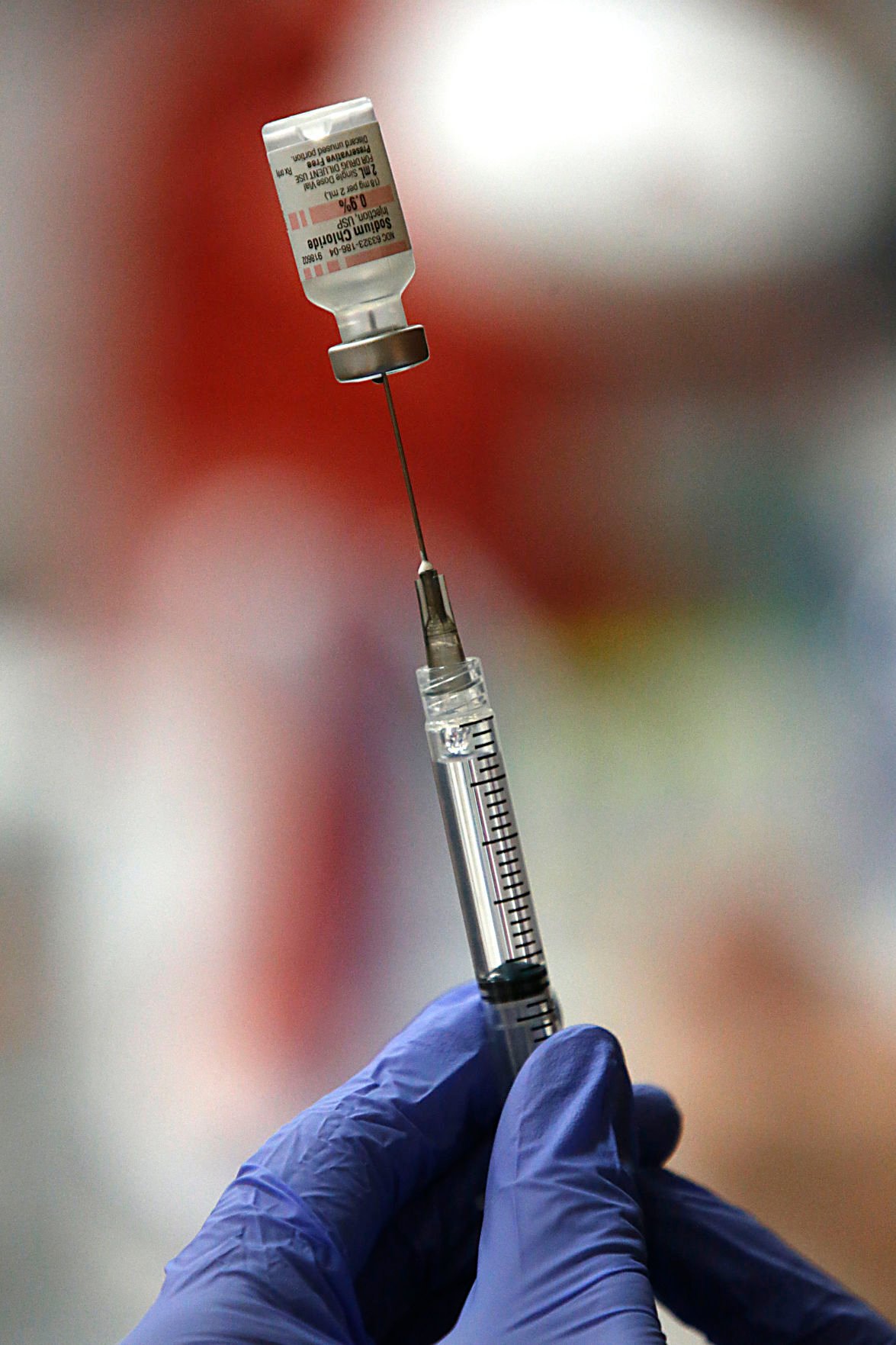 Pharmacist Mary Eoizabeth Moore checks a dose of the Pfizer vaccine at Hermitage Richmond in Richmond, VA Friday, Jan. 8, 2021. Staff and residents were being vaccinated at the facility, which has had no cases of the virus during this pandemic. 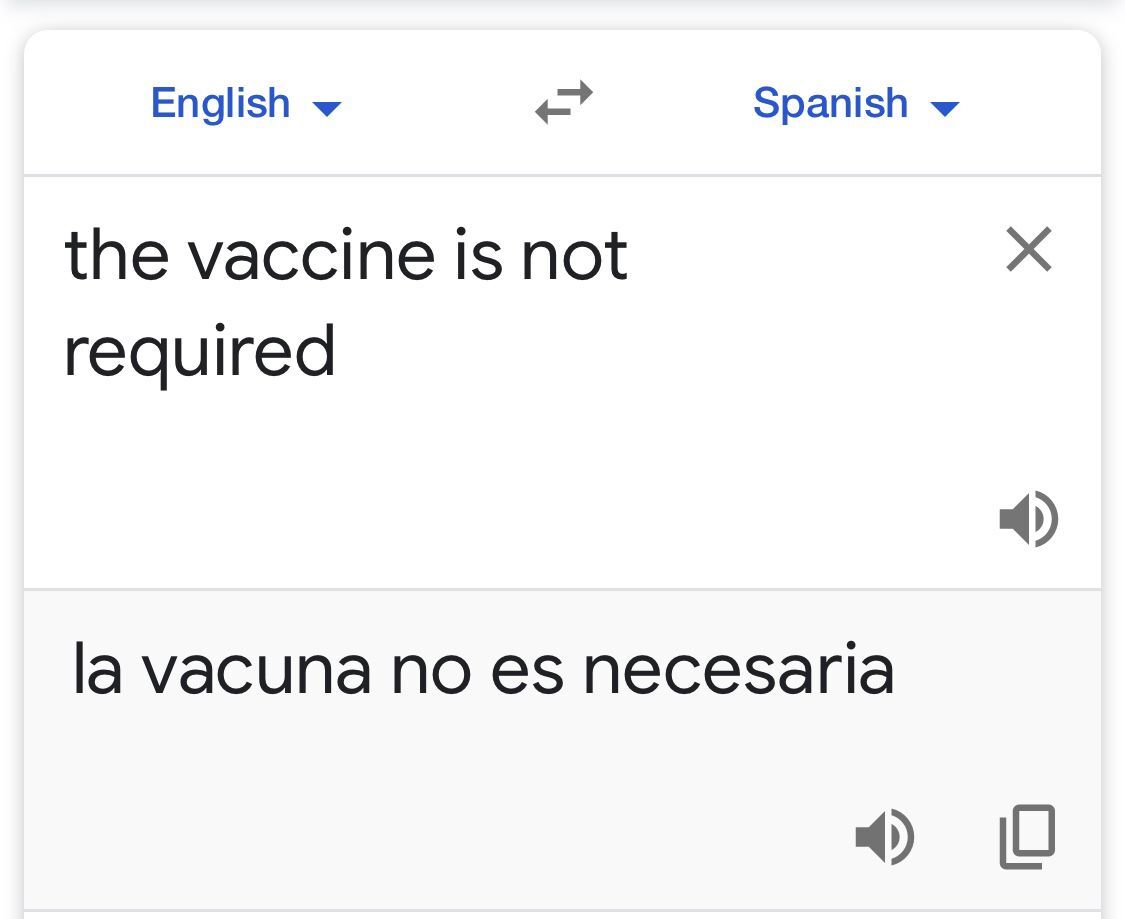 Google Translate translates “the vaccine is not required” into “la vacuna no es necesaria” in Spanish. 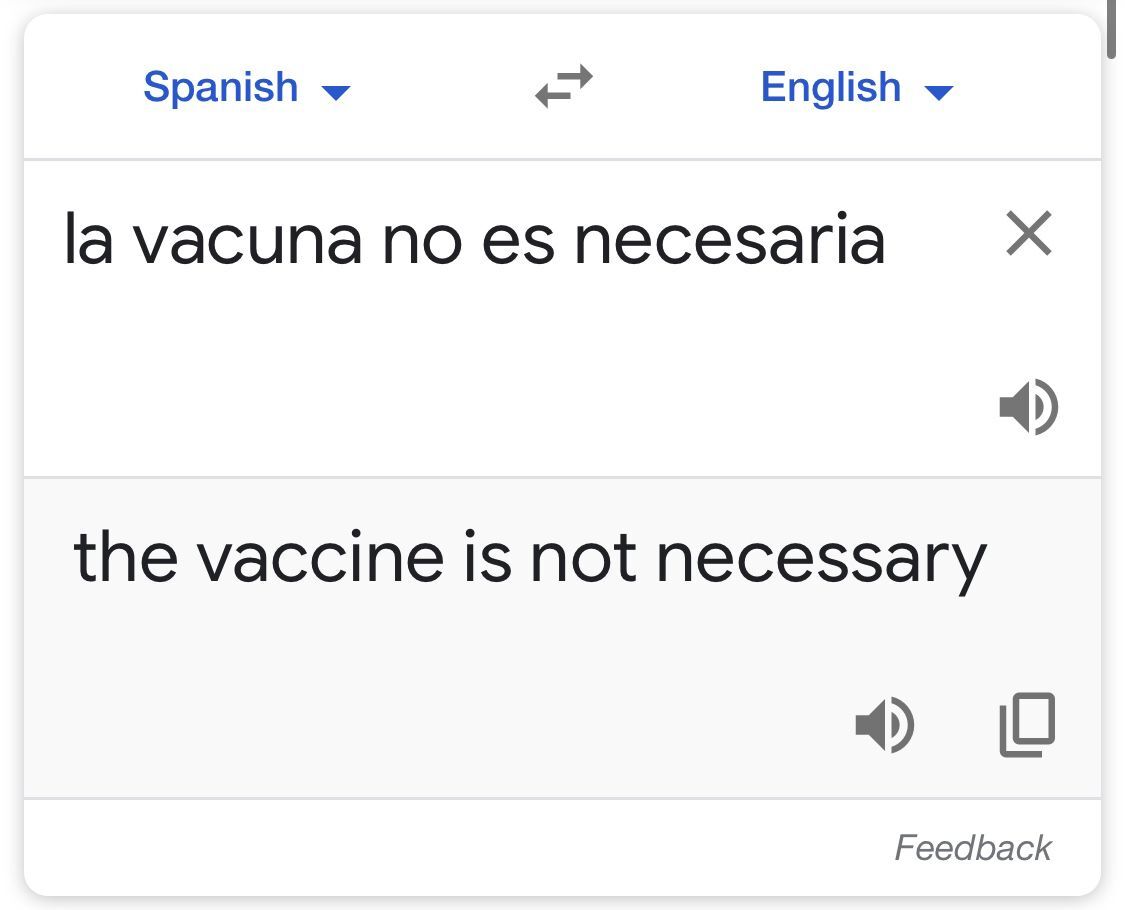 Conversely, the app translates “la vacuna no es necesaria” as “the vaccine is not necessary” in English. 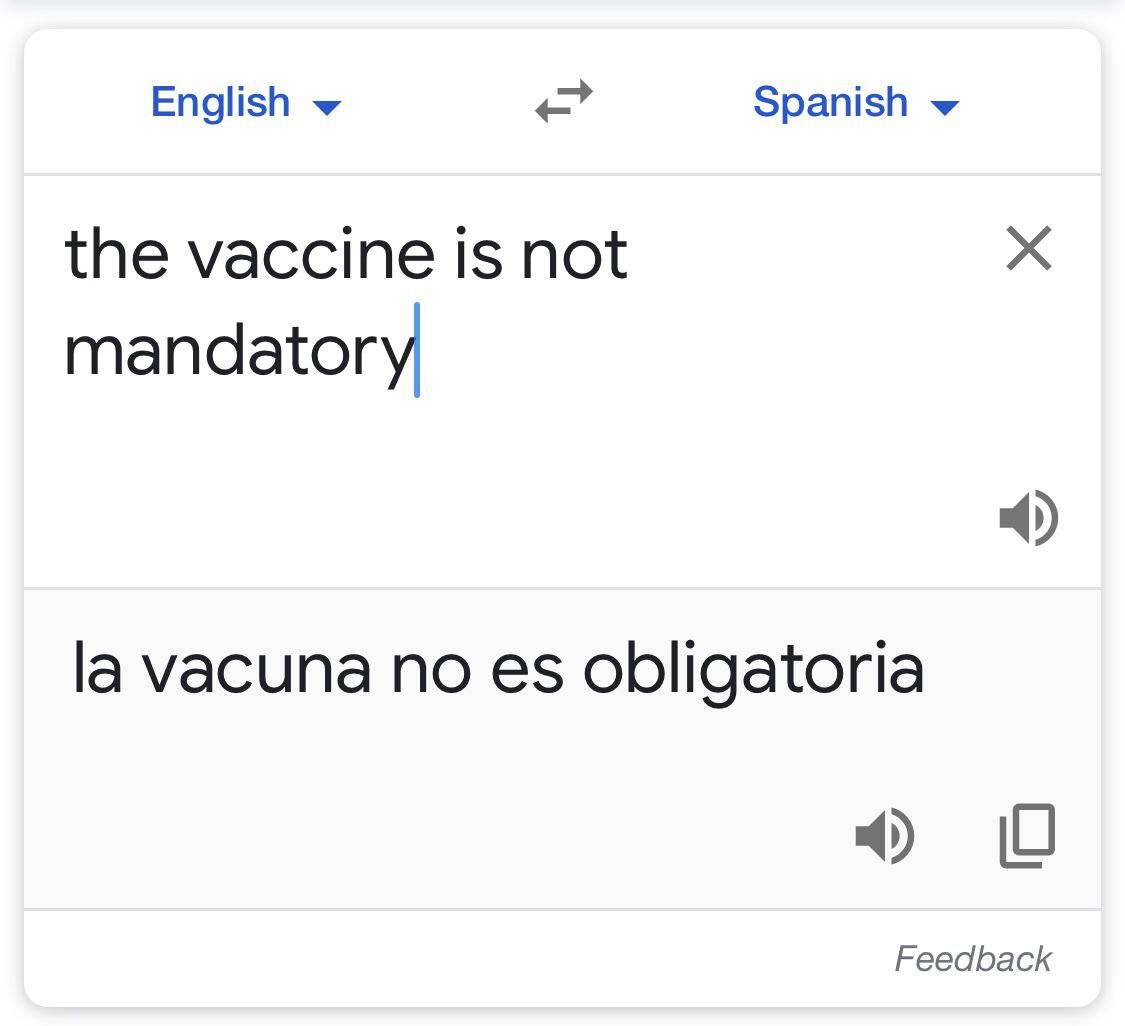 However, changing the word “required” to “mandatory” changes the Spanish translation on Google Translate to the correct phrasing.

The Virginia Department of Health’s main sources for translating critical COVID-19 and vaccine information are three marketing agencies that don’t list translation services on their websites and Google Translate, whose reliability experts and Google itself have cautioned against.

With most of the state rushing into the second phase of vaccinations that’s expected to include more immigrants who work in farming and manufacturing, errors like these run a heightened risk of thwarting state and community efforts to build confidence in the vaccine and the health officials urging hard-hit communities to take it.

As of Wednesday, Latinos made up 9% of vaccinations reported by race and ethnicity but 21% of COVID-19 hospitalizations in Virginia.

“Misinformation has been impacting all sorts of demographics, but at the end of the day, those who are mostly white and rich can afford to believe in something different because they’re not the ones who are having to do front-line jobs,” said Luis Oyola, director of organizing at Legal Aid Justice Center. “Whereas in immigrant communities, and in predominantly Black and brown communities, the misinformation plays double the harm.”

First reported by the Virginian-Pilot, George Mason University students pointed out the mistake to Dr. Rebecca Vargas-Jackson, a member of the Virginia Vaccine Advisory Workgroup that met Monday afternoon. Vargas-Jackson was not available for comment by time of publication.

By Tuesday, the VDH site had corrected the answer for “Will the COVID-19 vaccine be required for all Virginians?” to “La vacuna no será obligatoria.” The vaccine will not be mandatory.

Agency spokeswoman Maria Reppas said the vaccine FAQ page had 62,487 unique visits since Dec. 14, but it’s impossible to tell how many of those saw the page in Spanish — the second-most spoken language in Virginia.

In a statement to the Richmond Times-Dispatch, Reppas said of the inaccurate translation that “many Spanish speakers do read this form as it was intended — namely, to make clear the vaccine is not mandatory and therefore will not be forced on anyone.”

Part of this is due to “the vaccine is not necessary” being followed by “we urge you to get it once it’s available,” which could suggest the initial error was a blunder in translation and not a fact, said Cecilia Barbosa, a member of the Virginia Latino Advisory Board and a public health worker.

“But when you have a translation that can be interpreted in different ways, that’s not good,” Barbosa continued.

In context, which Google Translate does not always pick up, there’s a wide gap between “necessary” and “mandatory,” leaving medical information open to interpretation in a pandemic that has infected Latinos at three times the rate of whites.

Even taking into consideration the second half of the sentence, it’s still a bad translation, said Patricia Michelsen-King, a federally certified Spanish interpreter and translator who coordinates VCU’s Spanish-English translation and interpretation program. Interpretation translates spoken words while translation deals with writing.

“It’s a little better. But no,” she said. “Sometimes things may be done by well-meaning people, but they have to understand that you need competent people. Cultural competence. Accurate translation.”

Michelsen-King added that errors like these are commonly seen when agencies “cut corners” and prioritize saving money over populations most in need.

According to its pricing list, Google charges roughly $20 per million characters translated. Michelsen-King said certified interpreters and translators bill anywhere from $60 to $150 an hour. Non-certified translators can be as low as $15, but accuracy risks come with that, too, she added. Her decades in courts have shown faulty interpretation and translation services can result in poorer outcomes for non-English speakers.

In an interview Wednesday, Dr. Sergio Rimola, a physician in Fairfax for more than 20 years and member of the Virginia Latino Advisory Board, said he recommends the state require monitoring translations to ensure accuracy and consistency. But he estimates means like radio, TV and social media will be the more prominent vehicles in distributing information.

With chronic underfunding of public health systems, agencies can’t always meet the demand for translation services. The VDH also does not track how many of its 5,231 employees are currently Spanish speaking, Reppas said.

And speaking the language is not the same as being a certified translator, Michelsen-King said.

“If I need a doctor, I will go get a doctor who’s certified as a doctor,” Michelsen-King said. “I don’t just go looking for someone who’s read a medical book.”

The Department of Labor’s Civil Rights Center says not to use machine translation when it comes to vital documents, including webpages, if a trained human translator has not reviewed the translation first.

According to the U.S. Bureau of Labor Statistics, there are an estimated 2,350 interpreters and translators in Virginia. With the virus making this work virtual, Michelsen-King said accessing a human translator would not have been complicated and translating the VDH’s vaccination page is a straightforward task.

Google recommends all sites that use the translations without modification make a disclaimer about accuracy and reliability. The VDH currently does not, unlike other states such as New York, which also use these services to streamline the heavy lift of translating a flood of public materials.

Its site says, “Anyone relying on information obtained from Google Translate does so at his or her own risk.” But the disclaimer doesn’t eradicate how non-English speakers are still receiving a lower quality stream of information.

“The government is reaping what they sowed,” said Oyola, who warned of the desperate need for translated and culturally competent materials before the state had its first case in March.

Now with the vaccine rollout, Oyola is noticing the same patterns advocacy groups called out 10 months ago, when the state agency once again faced criticism for its failure to address ongoing language barriers that threatened to widen health disparities.

In April, translated COVID-19 information was not yet on the VDH website despite more than a million people in Virginia being immigrants.

At the time, State Health Commissioner Norman Oliver said, “We’re working on it,” but months later, the state was struggling to ramp up the hiring of Spanish-speaking contact tracers as Latinos accounted for nearly half of Virginia’s total cases.

Nearly 1.4 million people in the state speak a language other than English at home. Of that, more than half speak Spanish, according to the U.S. Census Bureau.

While the VDH is considered to be one of the most reliable sources in the state for COVID-19 information, the push to address deeply rooted systemic issues cannot solely fall on a state health department, said Karen Legato, executive director of Health Brigade, whose patient population is nearly 60% Latino.

But she said she was surprised at the state’s oversight on an error that should’ve been easy to catch.

Legato has witnessed VDH’s continuous outreach to organizations already trusted by immigrant populations, hosting almost weekly meetings with them on how they can address the needs of Latino communities and strategizing testing efforts in hard-hit neighborhoods.

“Is it enough? No, it’s not enough, because we need more,” Legato said. “I mean, that’s just the reality. We need more organizations involved in this. We need more people caring about this.”

The disparities in language accessibility and limited concrete action to address them aren’t isolated to VDH. Some Spanish-speaking families didn’t know Richmond Public Schools had gone virtual for the fall semester. The majority of emails from Chesterfield County Public Schools are still in English, despite the locality having one of the largest Latino populations in the state.

Nationally, the Centers for Disease Control and Prevention developed an app for vaccine follow-ups in mid-December available only in English. As of Thursday, that hadn’t changed.

Celebrities on what they've missed this awards season

2 Dead After Tesla Crash In Houston

2 Dead After Tesla Crash In Houston

As Chesterfield County’s school system encourages its students to return to the classroom in the fall, the district is offering two virtual op…

Anita Paleti, a pharmacist of Walgreens, gets ready to give COVID-19 vaccination to staff at Westport Rehabilitation and Nursing Center in Richmond, VA., on Wednesday, December 30, 2020.

Pharmacist Mary Eoizabeth Moore checks a dose of the Pfizer vaccine at Hermitage Richmond in Richmond, VA Friday, Jan. 8, 2021. Staff and residents were being vaccinated at the facility, which has had no cases of the virus during this pandemic.

Google Translate translates “the vaccine is not required” into “la vacuna no es necesaria” in Spanish.

Conversely, the app translates “la vacuna no es necesaria” as “the vaccine is not necessary” in English.

However, changing the word “required” to “mandatory” changes the Spanish translation on Google Translate to the correct phrasing.