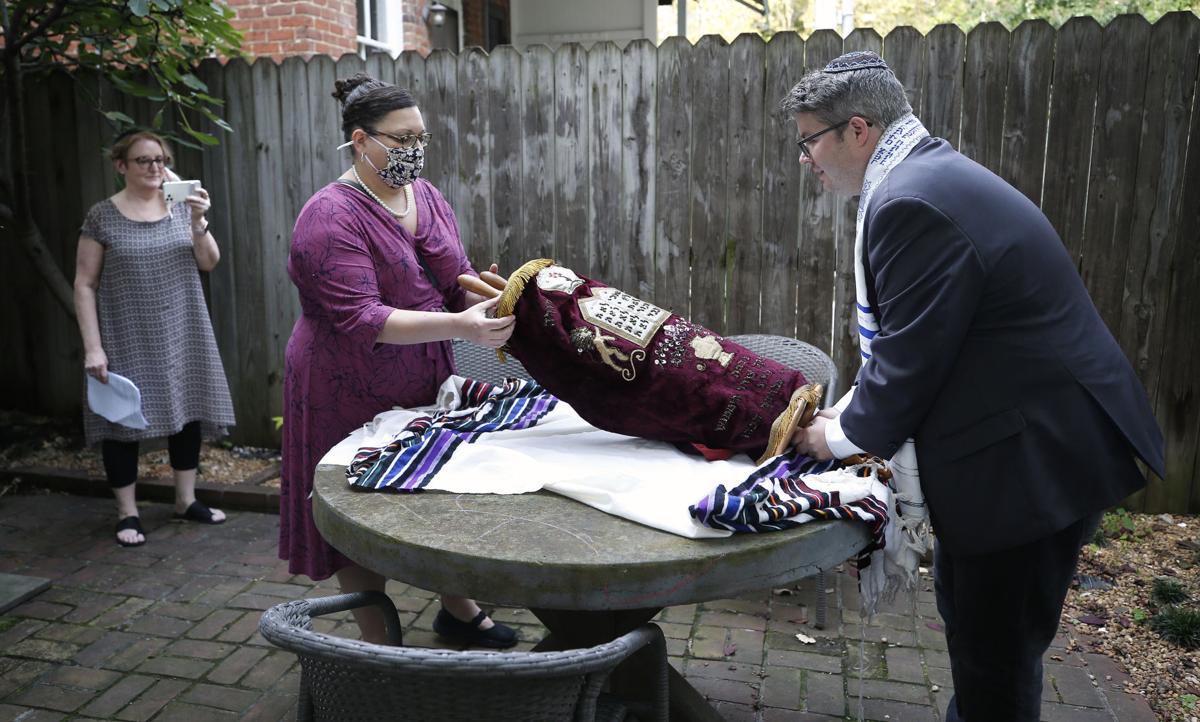 Leslie Moses took photos of Rabbi Patrick Beaulier and his wife, Stefanie Papps, undressing the Torah during a Rosh Hashana service in the Fan District on Friday. 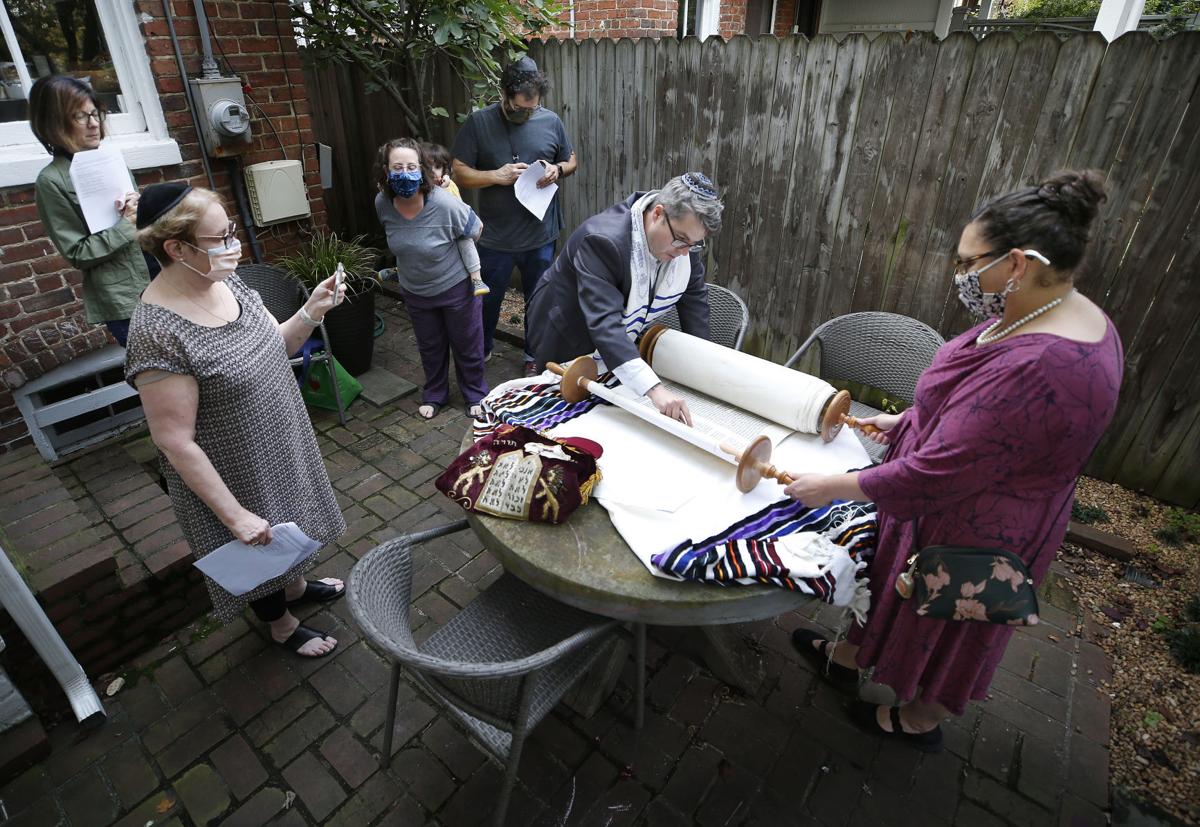 Rabbi Patrick A. Beaulier reads from the Torah during a Rosh Hashanah service in the Fan on Friday. Since COVID-19 prevented a Kehillah, or large celebration, Beaulier is bringing the celebration to the people this holiday weekend. His wife, Stefanie Papps (right) holds the Torah.

At an Airbnb on North Vine Street, the sun starts to sink and a party’s set to begin.

A tiny crowd gathers in the small backyard. Robin Rio, this evening’s musician, tunes her acoustic guitar. Patrick Beaulier, a rabbi from the independent Jewish community Kehillah, drapes a white and blue tullit across his shoulders.

It’s the first night of Rosh Hashana, the Jewish new year, and though the pandemic kept Kehillah from holding a large gathering, it didn’t stop Beaulier from bringing a “little flashpoint of light” in the form of a driveway service.

Pop-ups are normal for Kehillah. It doesn’t have a building and instead opts for condensed services that are open to the community in places that resonate with them across the city.

Its Rosh Hashana celebration would’ve walked the same line, but for this year’s version of the “birthday of the world,” Beaulier took inspiration from Driveway Drag Shows.

Beaulier and his wife, Stefanie Papps, who co-leads the congregation, were supposed to attend one of the mobile drag shows with friends before scheduling fell through. They knew hosting a gathering like they’re used to doing for Rosh Hashana would invite risk, an unwelcome visitor.

After hearing about the mobile shows, Papps thought it would be a good idea to take that concept and use it as a way to celebrate the High Holy Days.

For $90, those who requested the service — Beaulier said it was open to anyone, not just members of their congregation — receive a 20-minute program that features highlights of a typical Rosh Hashana celebration with music by Rio. Usually, services can last upward of three hours, Beaulier said.

Of course, no party is complete without party favors, Beaulier said. At Friday afternoon’s Torah reading, a bag of multicolored party blowers and a box of bright ’80s arcade-style games sat on the edge of a brick bed. A big bottle of hand sanitizer sat nearby.

The driveway services last through the next two days of Rosh Hashana and the following two of Yom Kippur. Beaulier expects to do services at about a dozen houses.

Beaulier described the holiday as a time for reflection, not just on what went wrong and what can be improved, but also on what went right.

“We can kind of beat ourselves up a little bit, say we’re going to do better, but it’s also good to remember you did some good stuff, too,” he said.

During Friday’s Torah reading, Beaulier explained the meaning of “avinu malkeinu” — “our father, our king” in Hebrew. He spoke of intimacy in familial relationships, the intimacy of coming from somewhere.

If Beaulier learned anything from his father, who worked in the hotel business, it was hospitality.

This year’s means of celebration wasn’t about bringing people into their own space, he said, but making them feel at home where they are.

Rosh Hashana looks different this year in many ways, and for Beaulier, it’s hitting home. Typically, Kehillah hosts an event called yizkor that’s meant to honor those lost during the year.

Beaulier usually just leads it, but this year won’t be as abstract — he’ll light a candle for his dad, who died in May.

When he spoke on mourning and loss, service-goer, Lisa Ebeling hugged her friend Leslie Moses. Ebeling lost her husband in January to brain cancer and said she was thankful for the unity the service provided. The rabbi’s mention of the “small things” particularly resonated with her.

During that point in the service, the small crowd gathered around a 90-year-old Torah straight from Jerusalem.

Beaulier spoke of the fourth day of creation, where the sun, moon and stars came to be. He told them the ancients thought of them as smaller luminaries, that darkness wasn’t the absence of light.

He continued and told the crowd that the little things they do for good add up.

Leslie Moses took photos of Rabbi Patrick Beaulier and his wife, Stefanie Papps, undressing the Torah during a Rosh Hashana service in the Fan District on Friday.

Rabbi Patrick A. Beaulier reads from the Torah during a Rosh Hashanah service in the Fan on Friday. Since COVID-19 prevented a Kehillah, or large celebration, Beaulier is bringing the celebration to the people this holiday weekend. His wife, Stefanie Papps (right) holds the Torah.