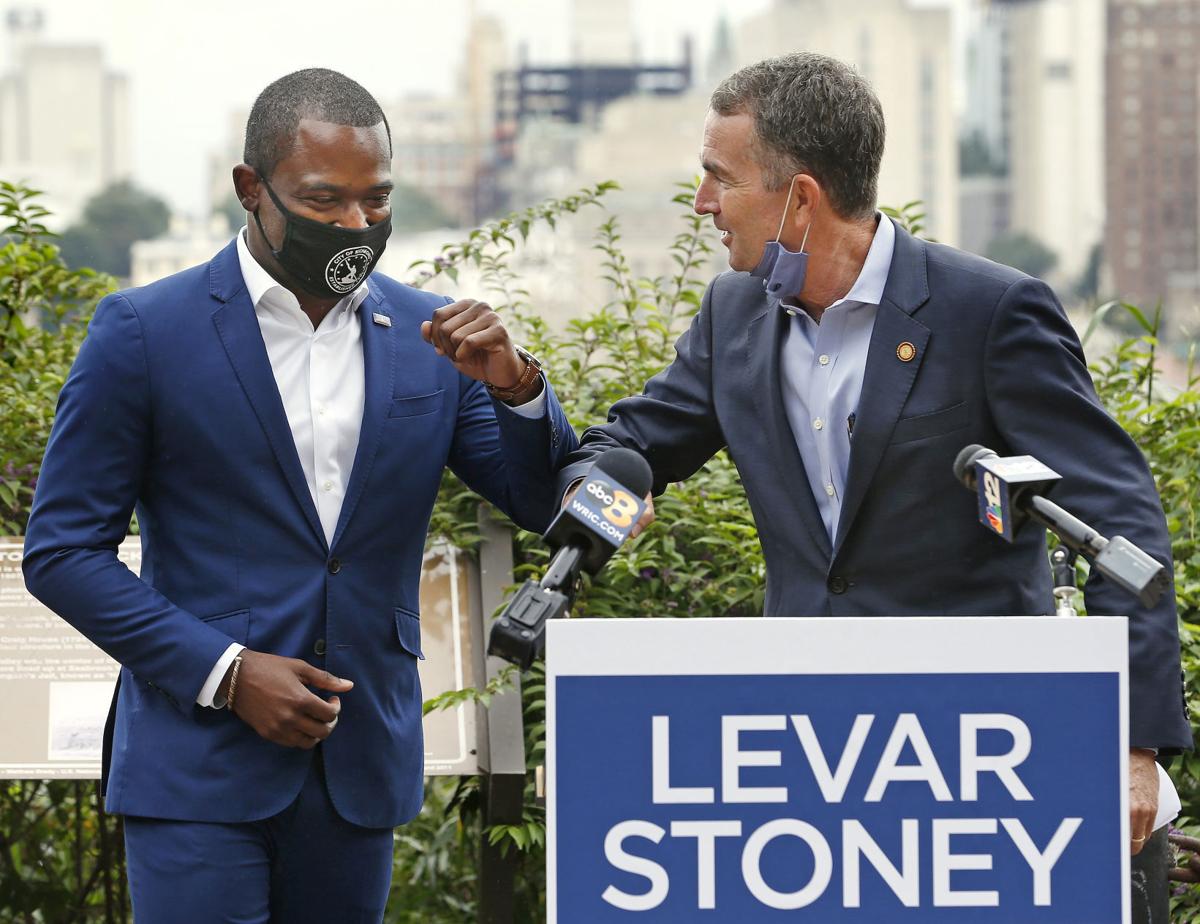 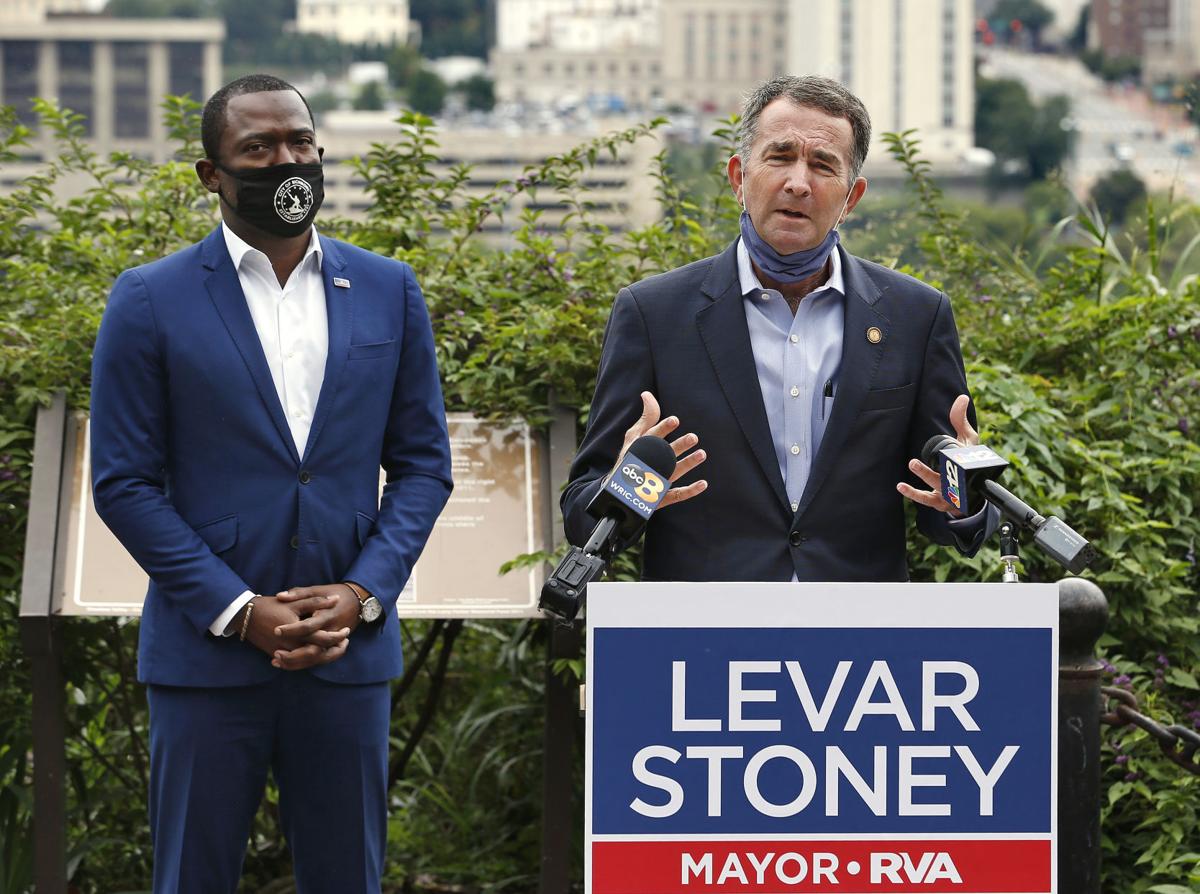 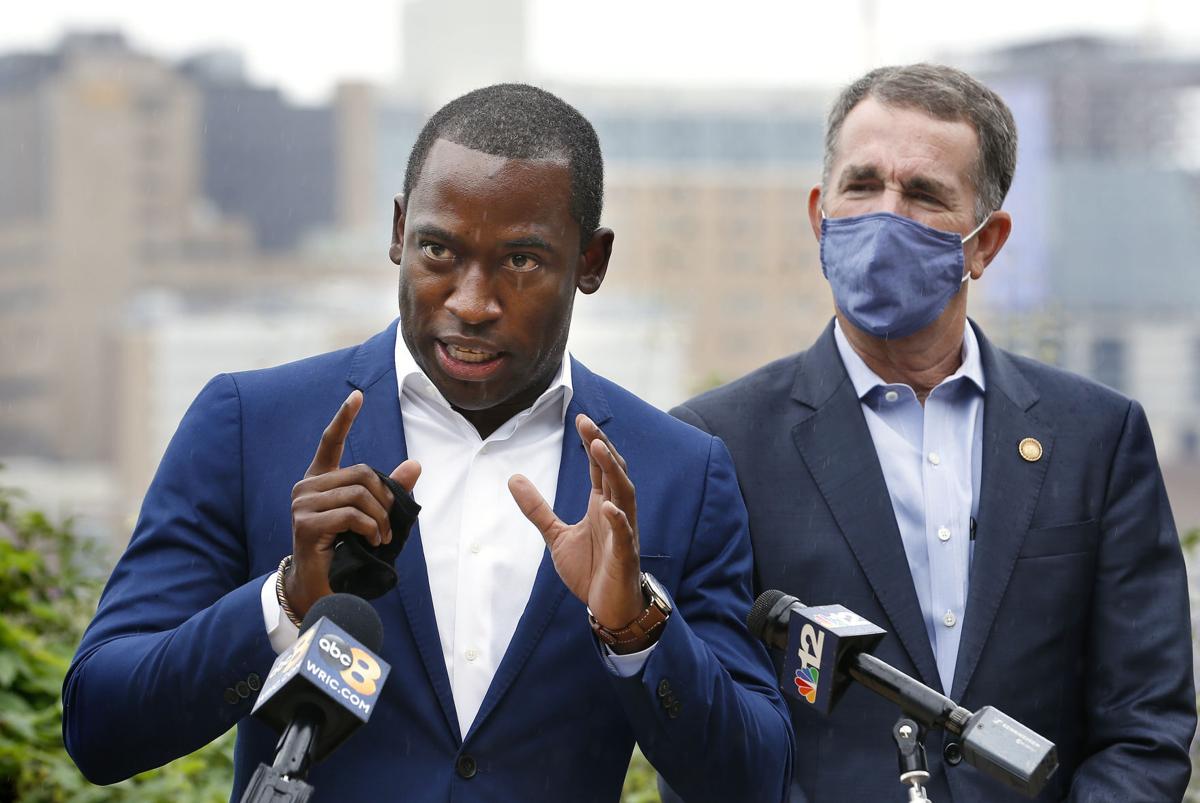 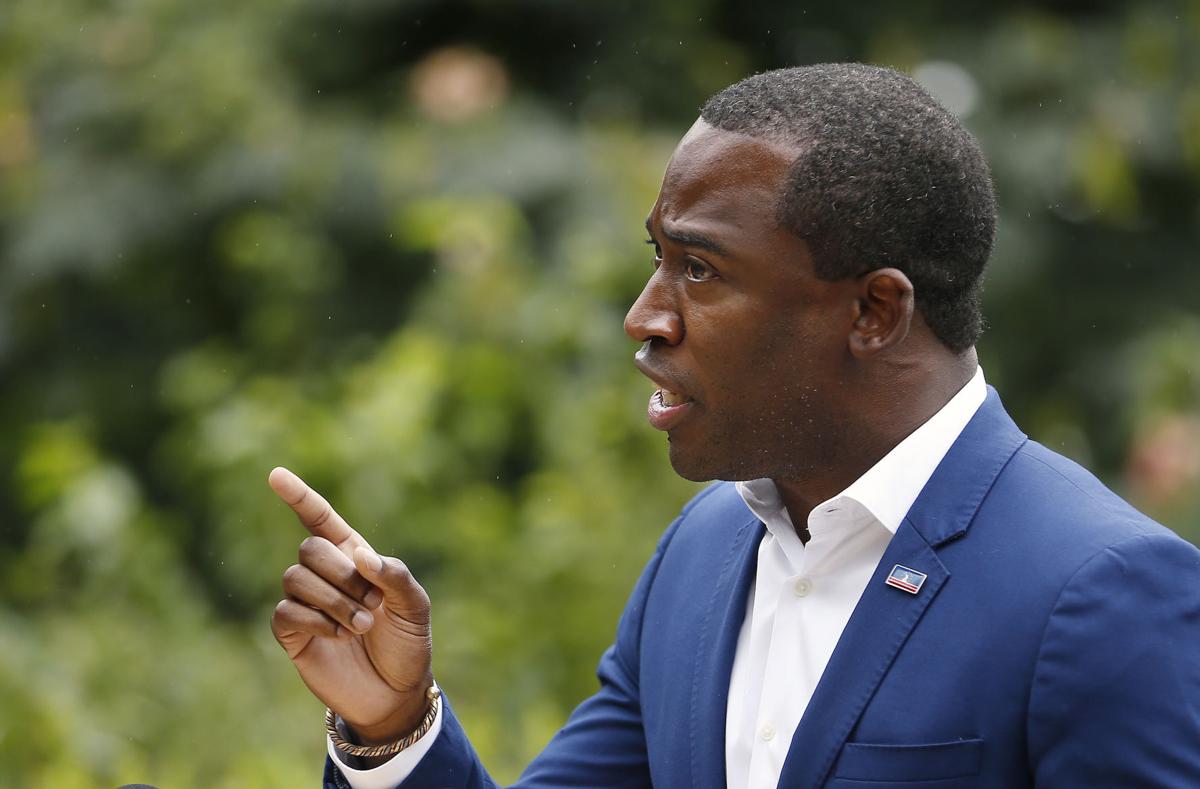 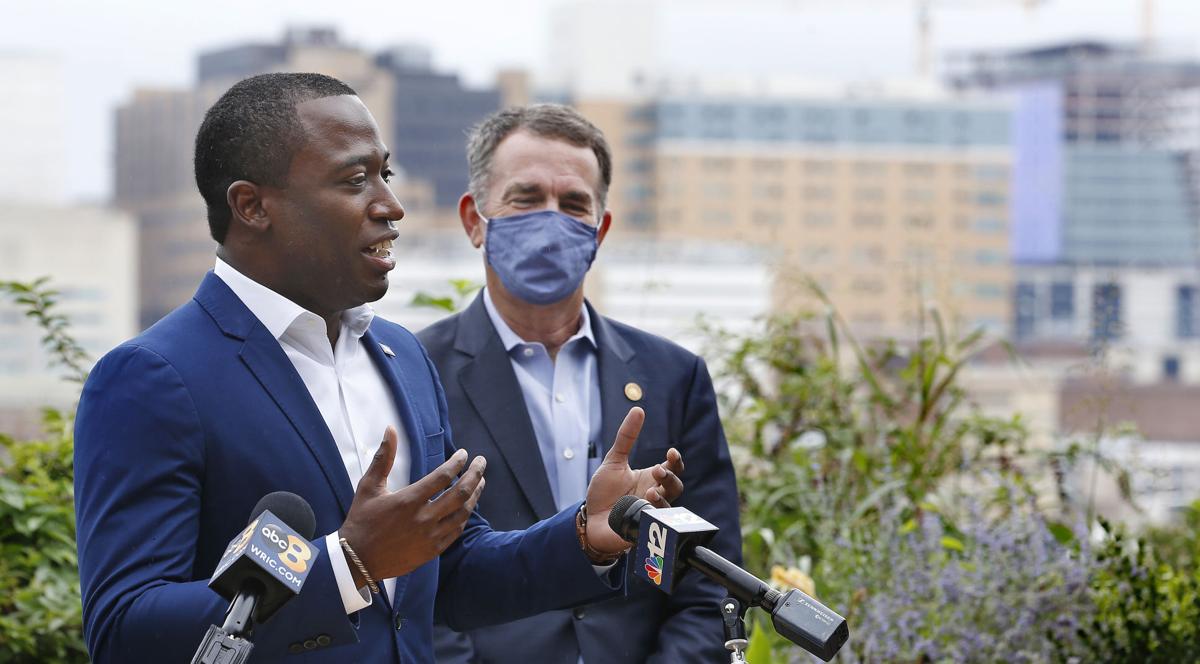 Mayor Levar Stoney, standing next to Gov. Ralph Northam, said affordable housing would be a priority if he’s elected to a second term. 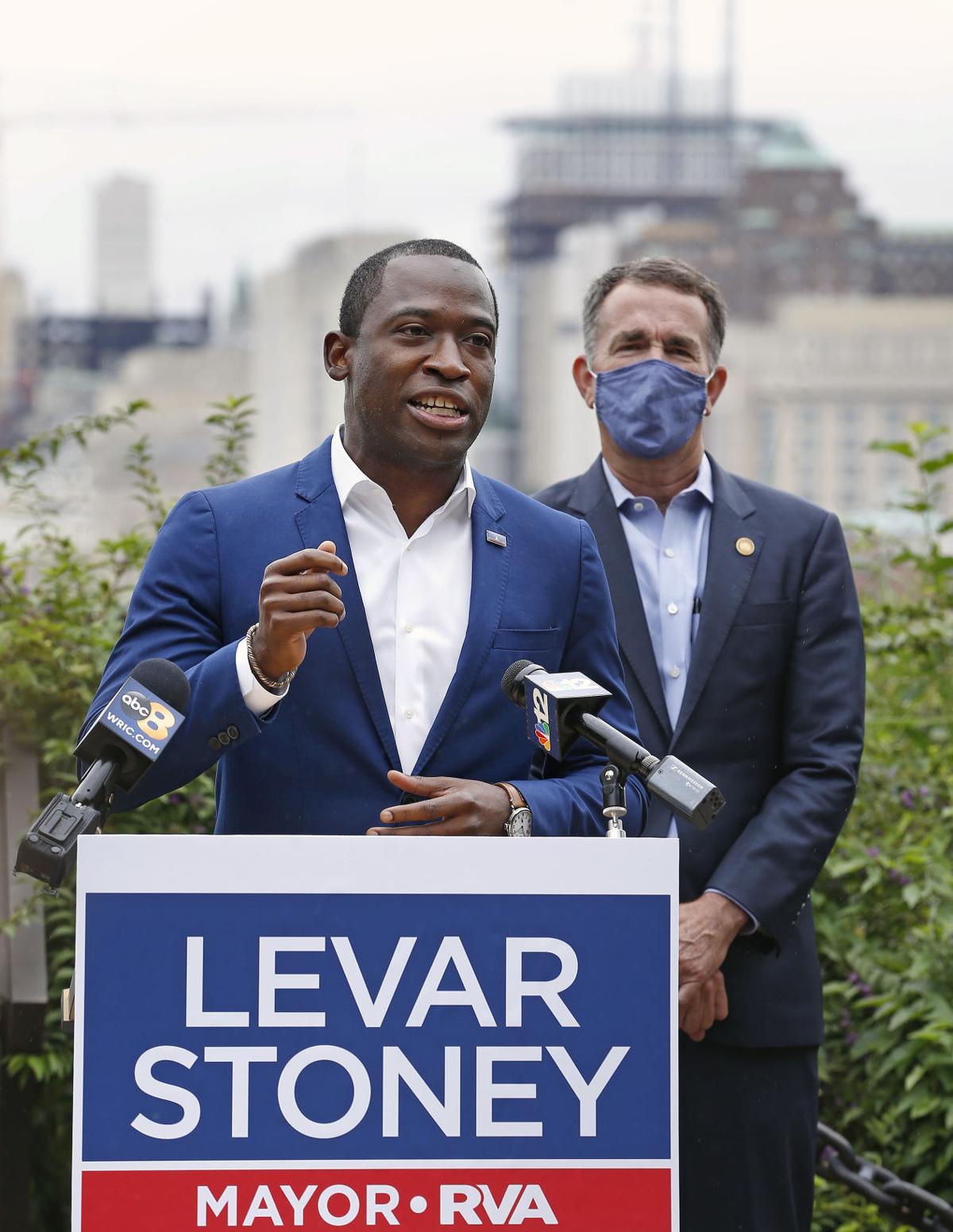 With Richmond Mayor Levar Stoney starting his re-election campaign in earnest, Gov. Ralph Northam appeared by his side at a campaign kickoff event Tuesday, announcing his endorsement for the incumbent in the upcoming mayoral election.

After speaking of his experience working with the mayor — from his time as a state senator working with Stoney when he was a Democratic Party official, to the past three years in addressing issues around education and housing, and most recently the COVID-19 pandemic and civil unrest over racial injustice — Northam said he will support the mayor’s re-election bid.

“Levar has been a leader. He’s a listener and takes action. He’s taken Richmond to the next level,” Northam said at a brief news conference in Church Hill. “I plan to vote for him on Nov. 3. I encourage everybody else in the city of Richmond to do the same.”

He said it is unsurprising — but still remarkable — that Northam would endorse Stoney, as the mayor and other political leaders last year called for the governor’s resignation after a racist photo from Northam’s medical school yearbook page surfaced.

Perry said a mix of apathy among voters and efforts by Northam afterward to speak about racial issues helped the governor restore his relationship with Stoney and other leaders. Perry said the recent coordination between the two political leaders in the removal of Confederate monuments likely helped solidify their bond.

Ultimately, Perry said, the election may come down to voters wanting a pragmatic progressive in Stoney or a “radical” change agent in mayoral opponent Alexsis Rodgers.

“Progress has occurred in Richmond, but maybe not to the pace or extent that some progressives would like to see,” Perry said.

Rodgers, who worked as a policy director for Northam during his term as lieutenant governor, also appears to have considerable backing from social justice activists and elements of the progressive wing in the Democratic Party.

The election will take place amid the COVID-19 pandemic and its ensuing economic fallout; a nationwide social justice movement that’s taken a strong hold in Richmond, leading to tumultuous confrontations between protesters and police this summer; and the removal of the city’s Confederate monuments after years of debate over whether they are overt symbols of white supremacy.

While the removal of the monuments and his administration’s handling of protests this summer has punctuated his term as mayor, Stoney said he wants to be remembered for more than those recent events, hoping to capitalize on the community’s desire for improved racial equity.

In a speech after the governor’s remarks, Stoney said he would prioritize the development of more affordable housing, public housing redevelopment, police reform and a “universal prekindergarten” program for children in the city if re-elected.

“The next decade will probably be the most critical in our city’s history. We can work toward healing and atonement, but we also have to recognize that the next four years will play a true role in setting the course for the next 10 years,” Stoney said. “I’m asking our residents not to miss this moment. This is truly the moment for change.”

Stoney’s stated commitments may do little to endear residents opposed to the removal of monuments, his handling of the social unrest, and the downtown Navy Hill redevelopment project that he promoted until it failed earlier this year.

Local political analysts say Gray, an opponent of the proposed redevelopment project who has called into question whether Stoney illegally awarded a $1.8 million contract to a company linked to one of his donors, poses a challenge to the mayor’s campaign.

Administration officials have denied any wrongdoing, saying the no-bid contact was awarded in an emergency situation over the social unrest.

Longtime Richmond political analyst and former VCU politics professor Bob Holsworth said it would be premature to suggest that Stoney is likely to lose, noting that one of his staunchest allies is Terry McAuliffe, a former Democratic National Committee chairman and Virginia governor whom Stoney worked for as secretary of the commonwealth.

Stoney, an adviser to McAuliffe since 2010, was deputy campaign manager during his successful 2013 run for governor. After Stoney resigned from his Cabinet in April 2016, McAuliffe said he would support Stoney for mayor and “do whatever he wants me to,” but said he did not know how influential his backing would be.

“I think because he and I are close it may affect one vote: my wife,” McAuliffe said at the time.

Northam will not run for re-election next year — governors in Virginia are limited to non-consecutive terms. McAuliffe, however, is exploring a potential second gubernatorial term.

“I think [Stoney] still has some advantages that people haven’t paid attention to — this is one of them,” Holsworth said of Northam’s endorsement. “What it demonstrates is the political resources Levar has at his disposal that the other candidates don’t have, and will need to overcome.”

A mayoral candidate must carry at least five of the city’s nine districts to win. If no candidate wins five districts, the race will go to a runoff six weeks later between the two top candidates.

Kirk Showalter, the city’s voter registrar, said anyone who has submitted an absentee voting form saying they would vote only in November’s election will need to submit another form if they wish to vote by mail again in the runoff election.

Candidate questionnaires for Richmond School Board and City Council will run weekly, by district, as Election Day approaches.

Will taxes go up or down?

Mayor Levar Stoney, standing next to Gov. Ralph Northam, said affordable housing would be a priority if he’s elected to a second term. 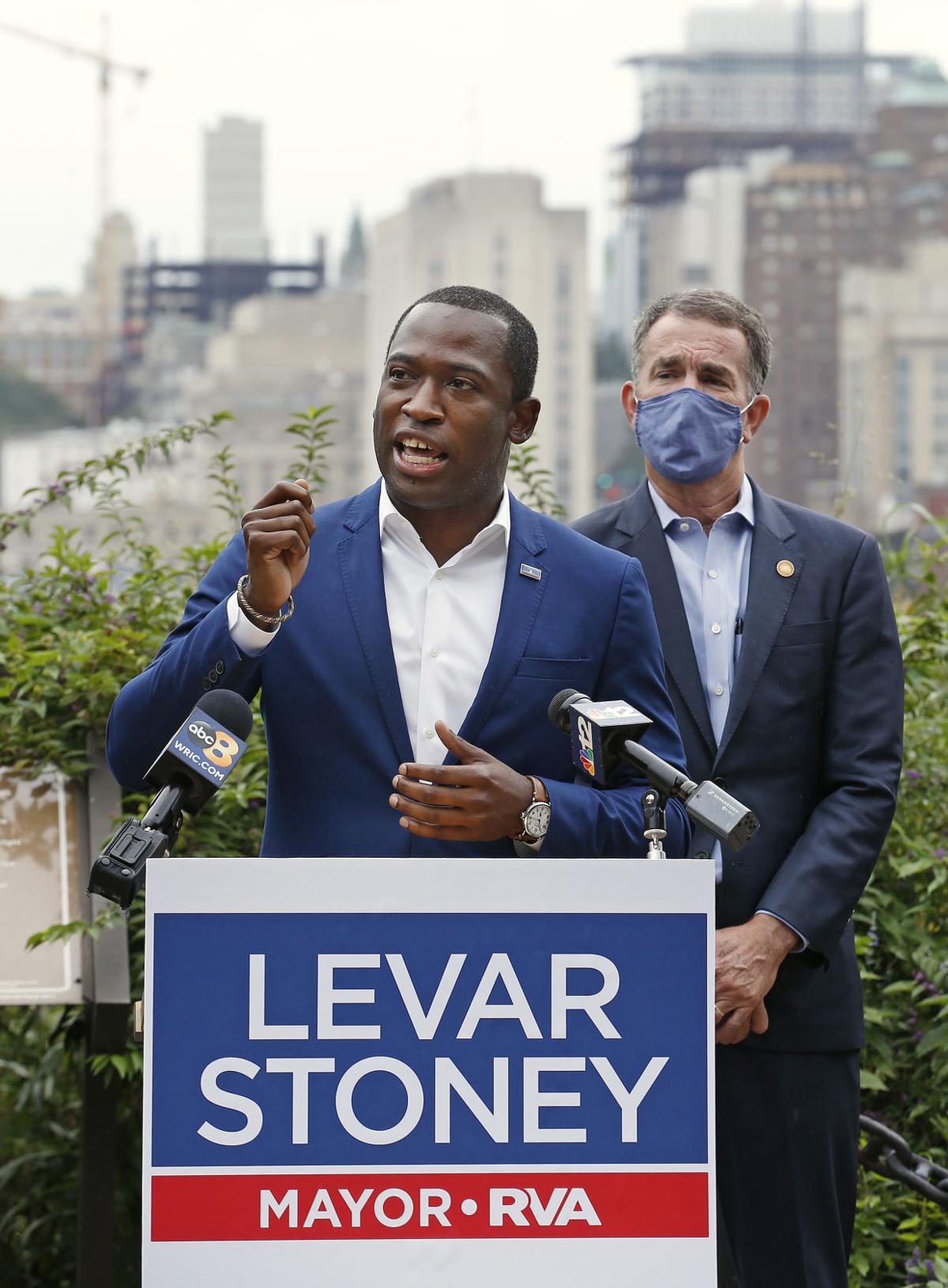