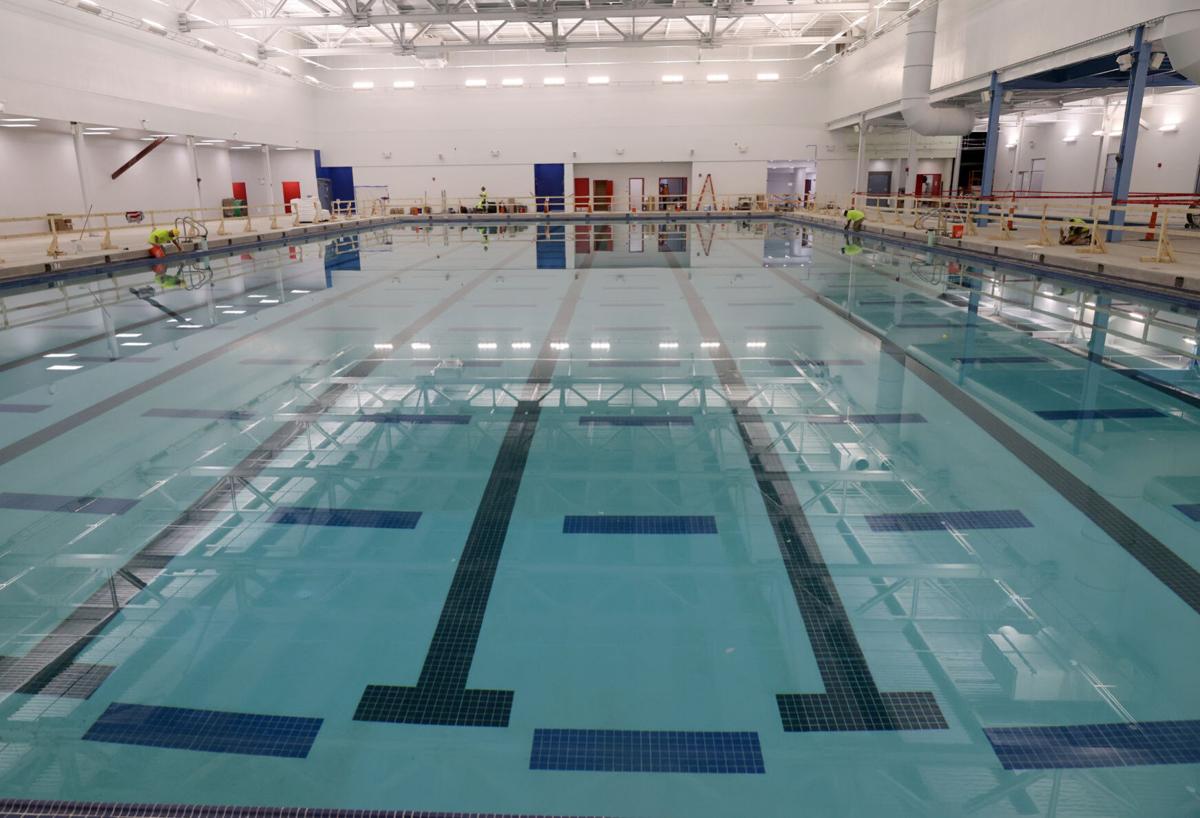 The new indoor aquatics center will be used as a location for Henrico public school students to learn to swim. 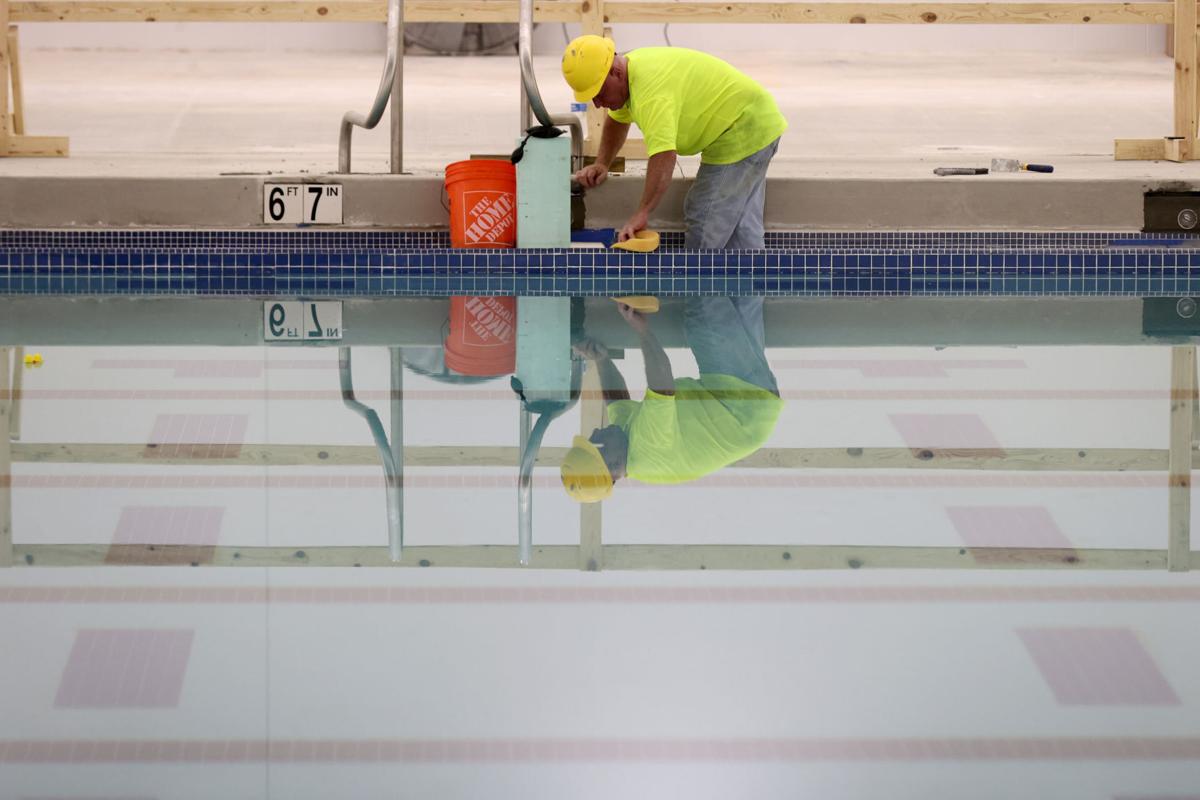 A man works on NOVA's new aquatics center at Regency mall in Henrico on Friday, July 16, 2021. There are two 25-yard pools and an Olympic sized swimming pool. 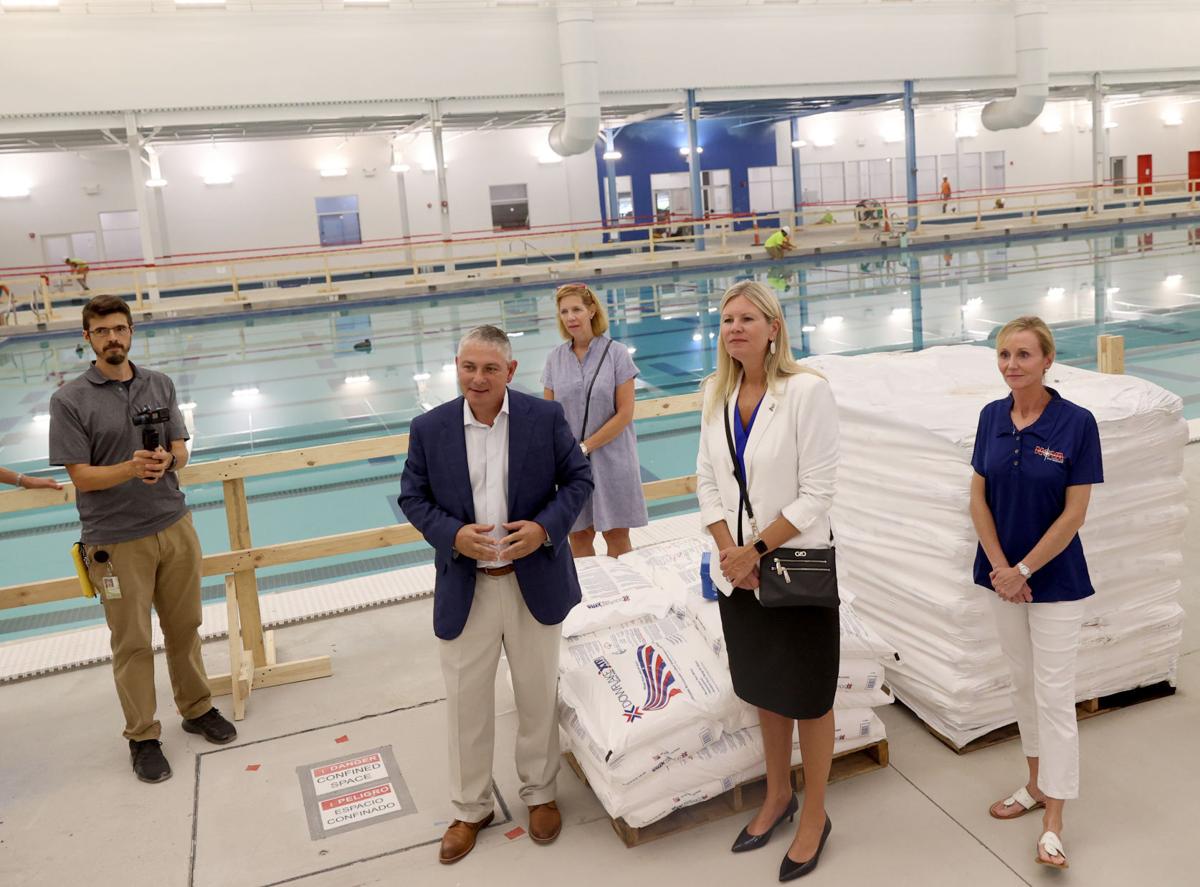 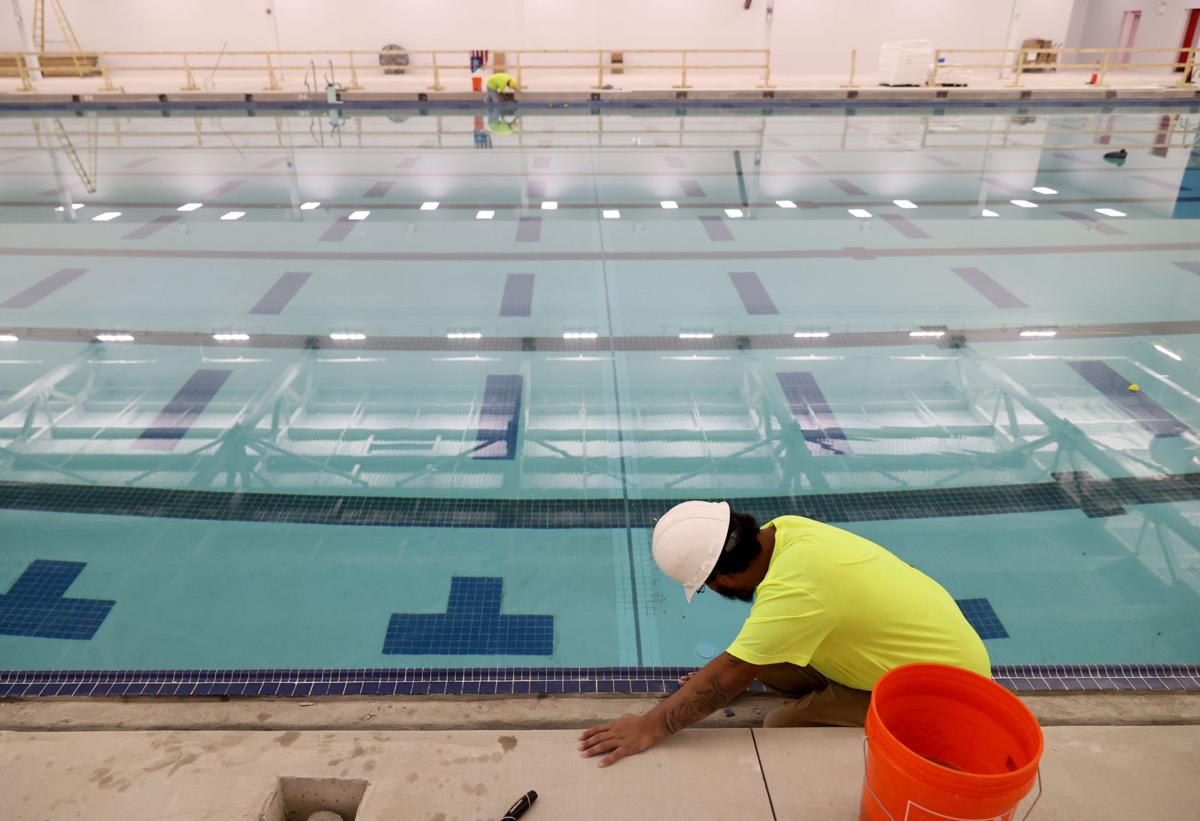 A crew works on NOVA's new aquatics center at Regency mall in Henrico on Friday, July 16, 2021. There are two 25-yard pools and an Olympic sized swimming pool. 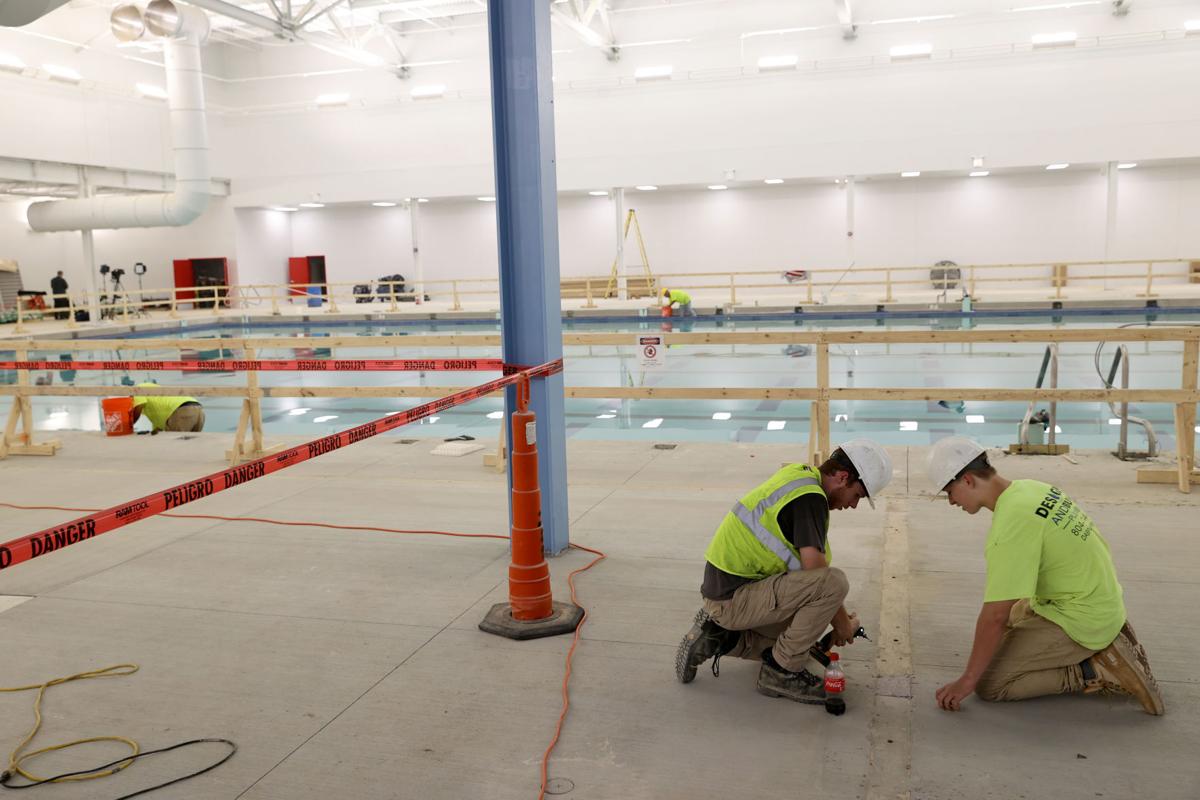 Men work on NOVA's new aquatics center at Regency mall in Henrico on Friday, July 16, 2021. There are two 25-yard pools and an Olympic sized swimming pool. 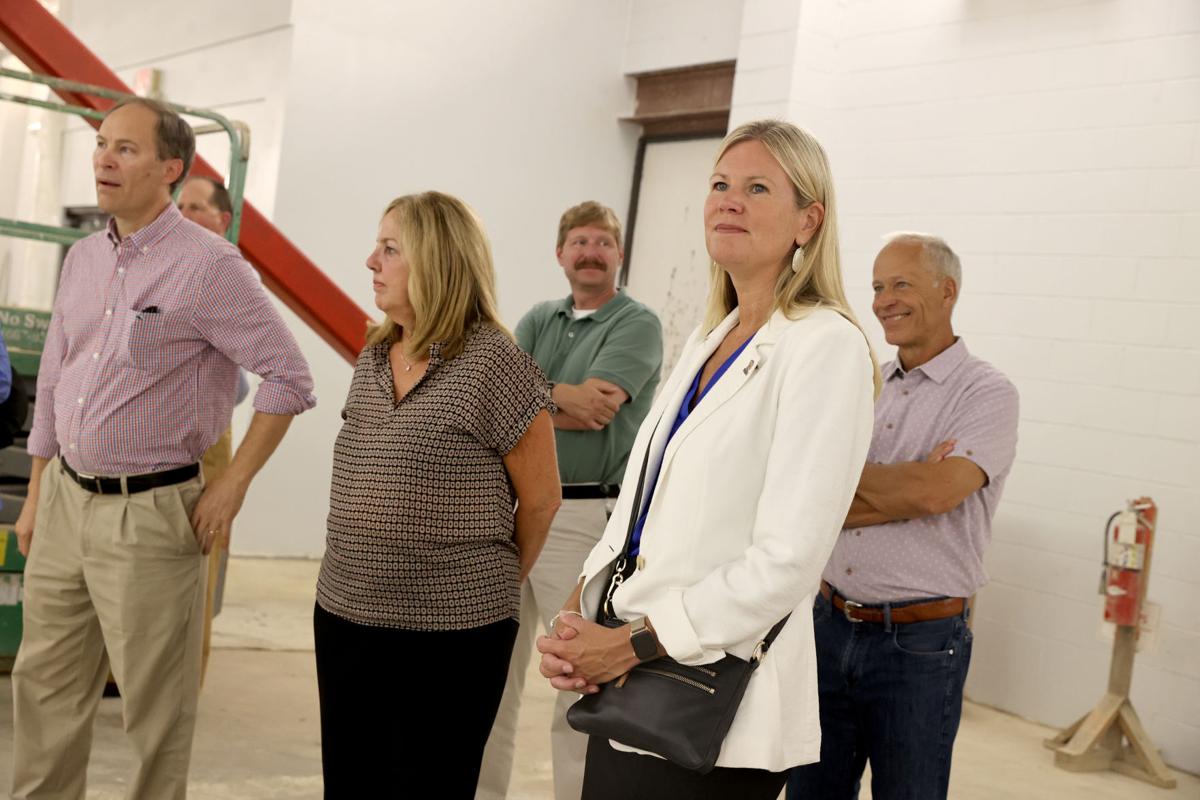 For several years, NOVA of Virginia Aquatics coach Drew Hirth has been looking forward to the swimming organization having a new indoor aquatics center.

His wish is becoming reality: NOVA of Virginia Aquatics will soon be operating a new swimming facility in the former Macy’s South building at Regency mall in western Henrico County. The new center is slated to open in September.

“It’s been an incredibly rewarding experience for me and for our club,” Hirth said Friday after touring the new aquatics center with club members, county leaders, the mall’s owners and others.

The first phase of the aquatics center project, which cost $12.5 million, includes an Olympic-size 50-meter pool and two 25-yard pools, along with about 800 bleacher seats.

A second phase would include the addition of a spectator mezzanine and other amenities, but a price tag has yet to be determined, said NOVA Executive Director Ann McGee.

NOVA had been looking for ways to expand its existing swimming center on Gayton Road in Henrico since 1997. It even had made plans to build a new pool next to its existing one but found out in 2018 that it could not build on the site.

Then along came the owners of Regency, which were trying to breathe new life into the mall and to that area of Henrico with plans to transform the aging two-level mall into a mixed-use development with retail, restaurants, apartments, offices and entertainment venues.

NOVA signed a long-term lease in 2019 with the mall’s owner, Richmond-based The Rebkee Co. and Henrico-based Thalhimer Realty Partners Inc.

That included a $500,000 gift from the family of Richard L. Sharp, the former longtime CEO of the now-defunct consumer electronics retailer Circuit City and the co-founder of CarMax who died in 2014. The main pool will be named after the Sharp family.

Henrico also partnered with NOVA with plans to contribute $1.75 million to the project in installments of $350,000 over five years.

“I’m absolutely blown away,” County Manager John Vithoulkas said Friday during the tour of the new center. “This used to be a Macy’s department store, and now you have an Olympic-sized pool.”

Putting the aquatics center at the mall benefits both NOVA and the county, Vithoulkas said, citing the need to reinvent spaces like Regency because of changes in retailing from the influx of online shopping.

Part of the partnership with Henrico was the county’s goal of promoting water safety and healthy lifestyles. The new aquatics center also will be used as a location for Henrico public school students to learn to swim, which aids the goal of the Board of Supervisors to make Henrico “drown-proof.”

Schools Superintendent Amy Cashwell said the school system plans to have a structure in place throughout the upcoming school year that allows all second-graders to take a field trip to the new aquatics center to learn swimming basics.

While the county was already conducting drown-proofing programs for fifth-graders, Cashwell said she and other school officials heard and saw a potential learning gap when discussing learning to swim with students. Giving students the ability to learn how to swim aids in the school district’s goal of creating “life-ready” students, she said.

“It’s a tremendous partnership,” Cashwell said. “Community is everything to us as a school system. We certainly know that we cannot go at this alone. And so the incredible support the Henrico County government offers us as a school system and always thinking about how we can strengthen our community structures to support our young people. And this is a great example of that.”

Lori Haas, a former Henrico resident who now lives in Richmond, said the new aquatics center is “amazing” and will benefit the county. She said swimming in general has significant benefits for children.

Her son, Townley Haas, who was on a team that won a gold medal in the 4x200-meter freestyle relay at the 2016 Olympics, started swim lessons at age 3. He began swimming competitively for NOVA when he was 9. Her son is set to compete for the U.S. swim team at the Tokyo Olympic Games, which begin next week.

The new indoor aquatics center will be used as a location for Henrico public school students to learn to swim.

A man works on NOVA's new aquatics center at Regency mall in Henrico on Friday, July 16, 2021. There are two 25-yard pools and an Olympic sized swimming pool.

A crew works on NOVA's new aquatics center at Regency mall in Henrico on Friday, July 16, 2021. There are two 25-yard pools and an Olympic sized swimming pool.

Men work on NOVA's new aquatics center at Regency mall in Henrico on Friday, July 16, 2021. There are two 25-yard pools and an Olympic sized swimming pool. 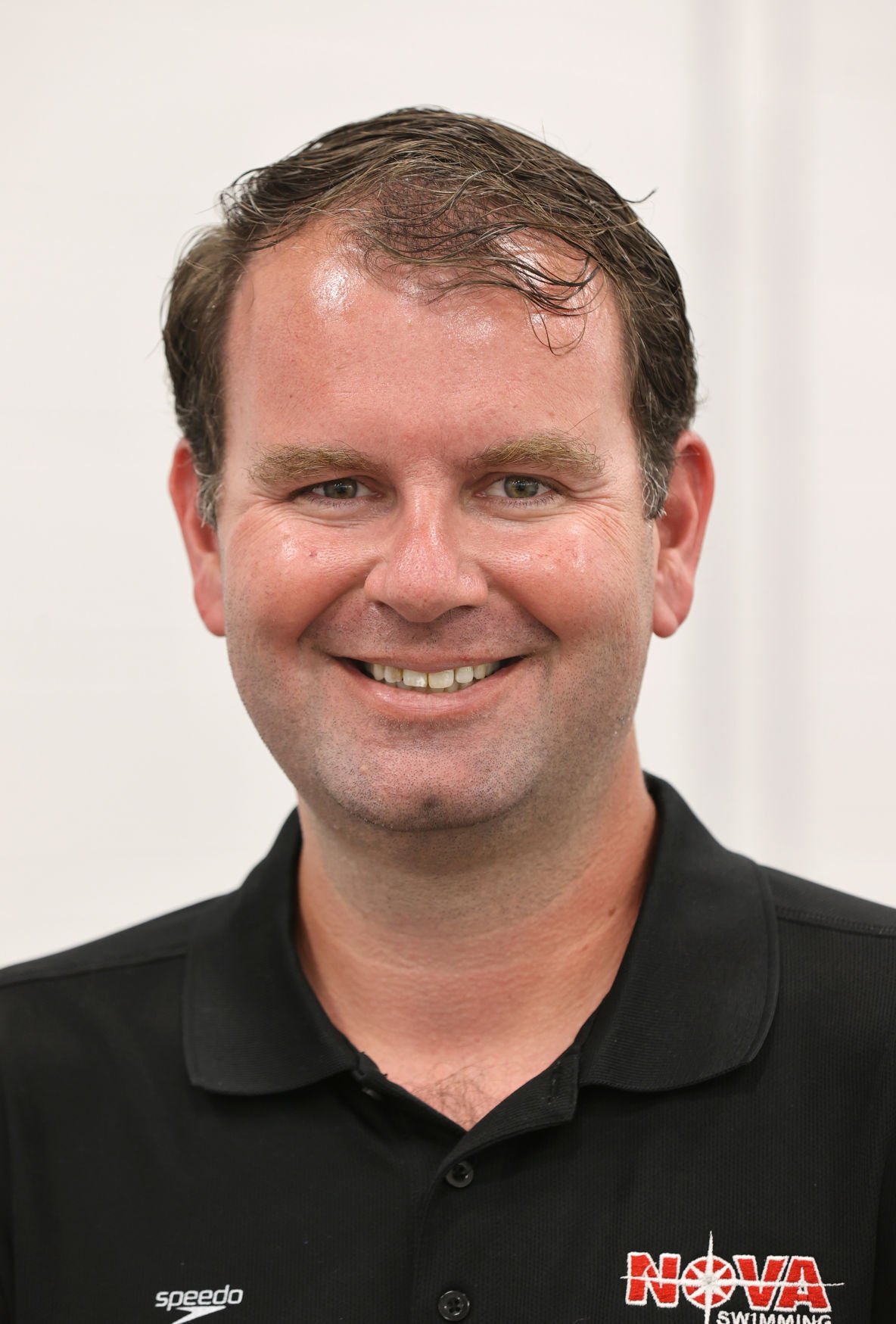 Drew Hirth of NOVA of Virginia Aquatics is shown at NOVA's new aquatics center at Regency mall in Henrico on Friday, July 16, 2021. 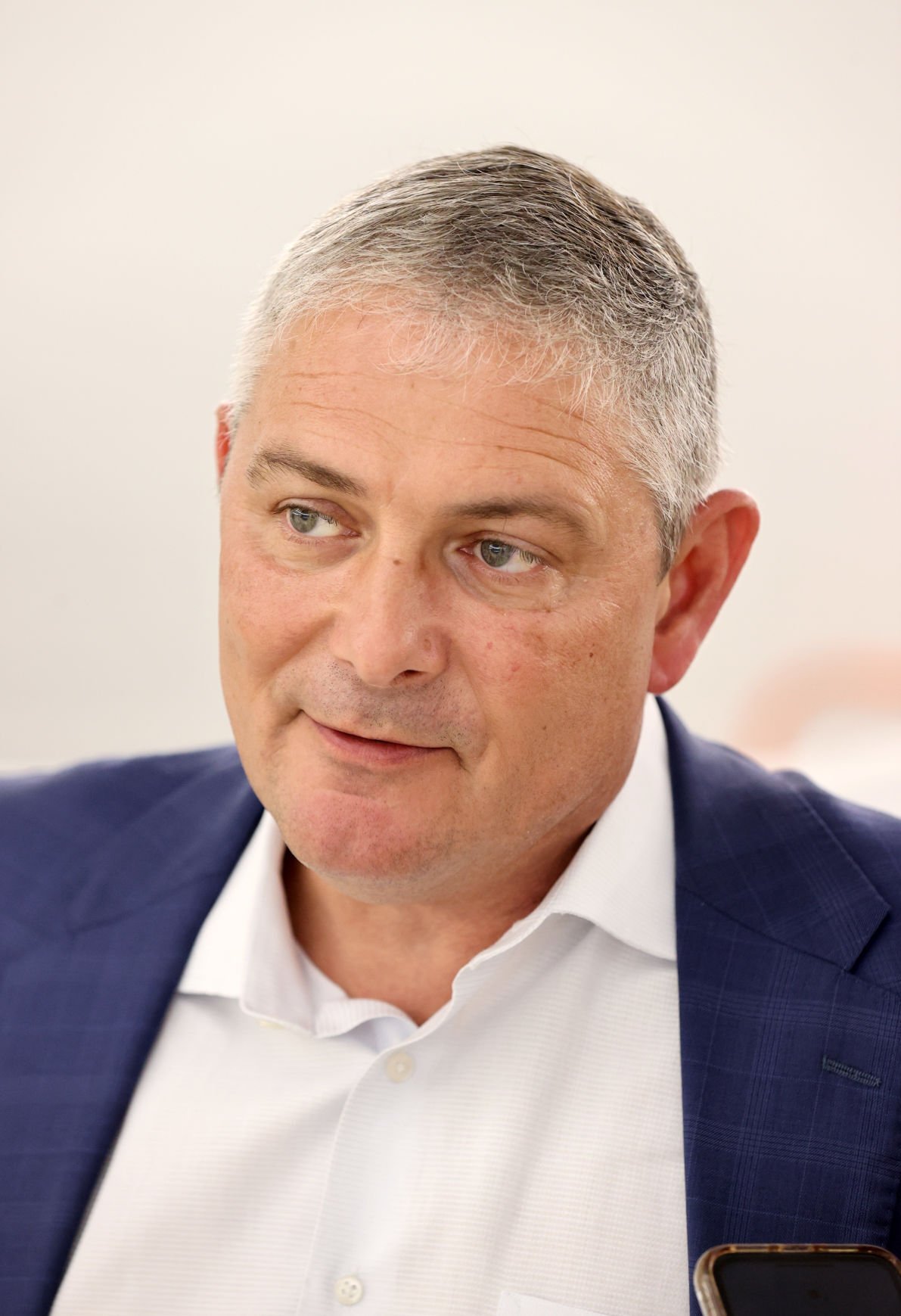 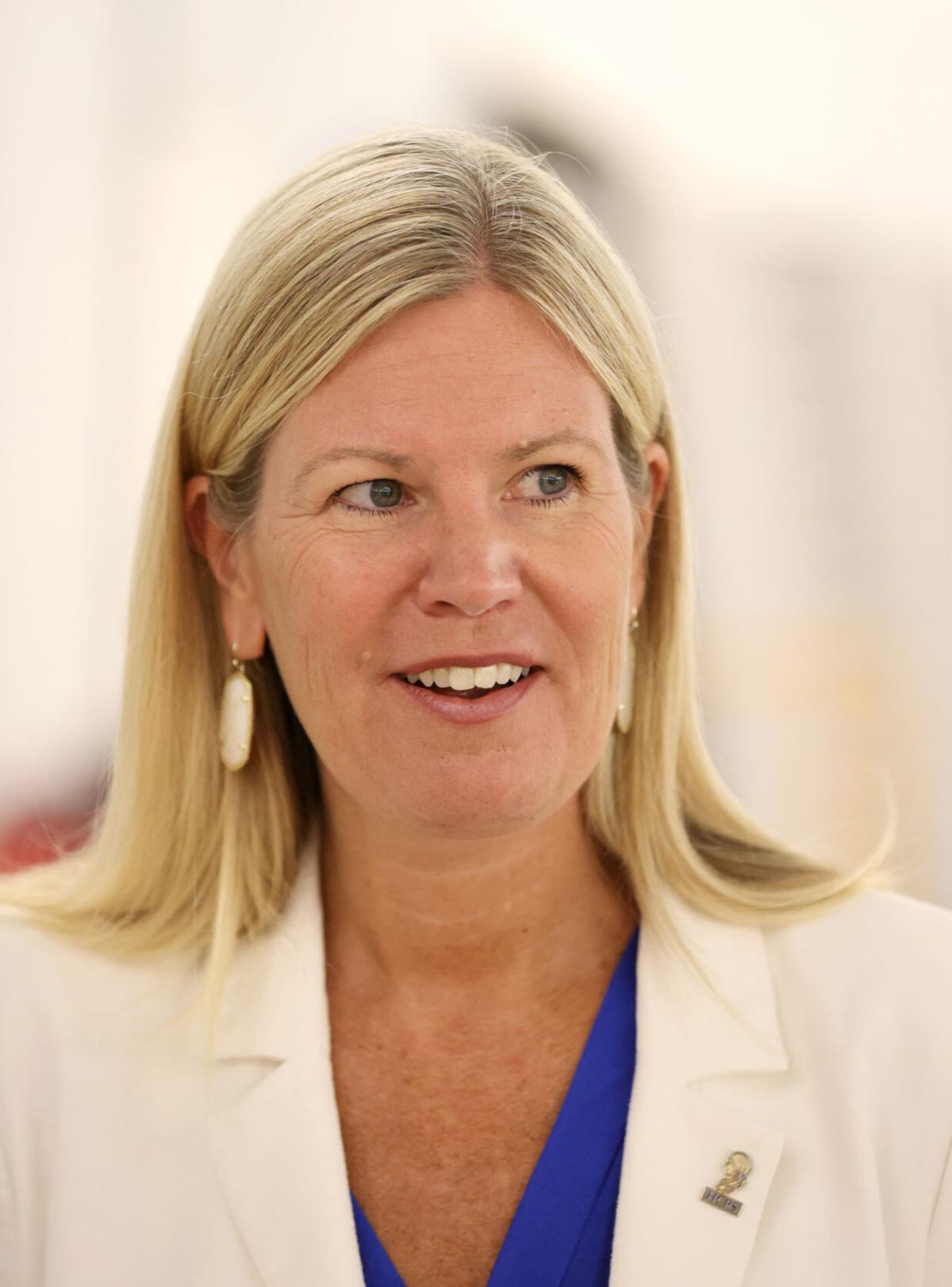