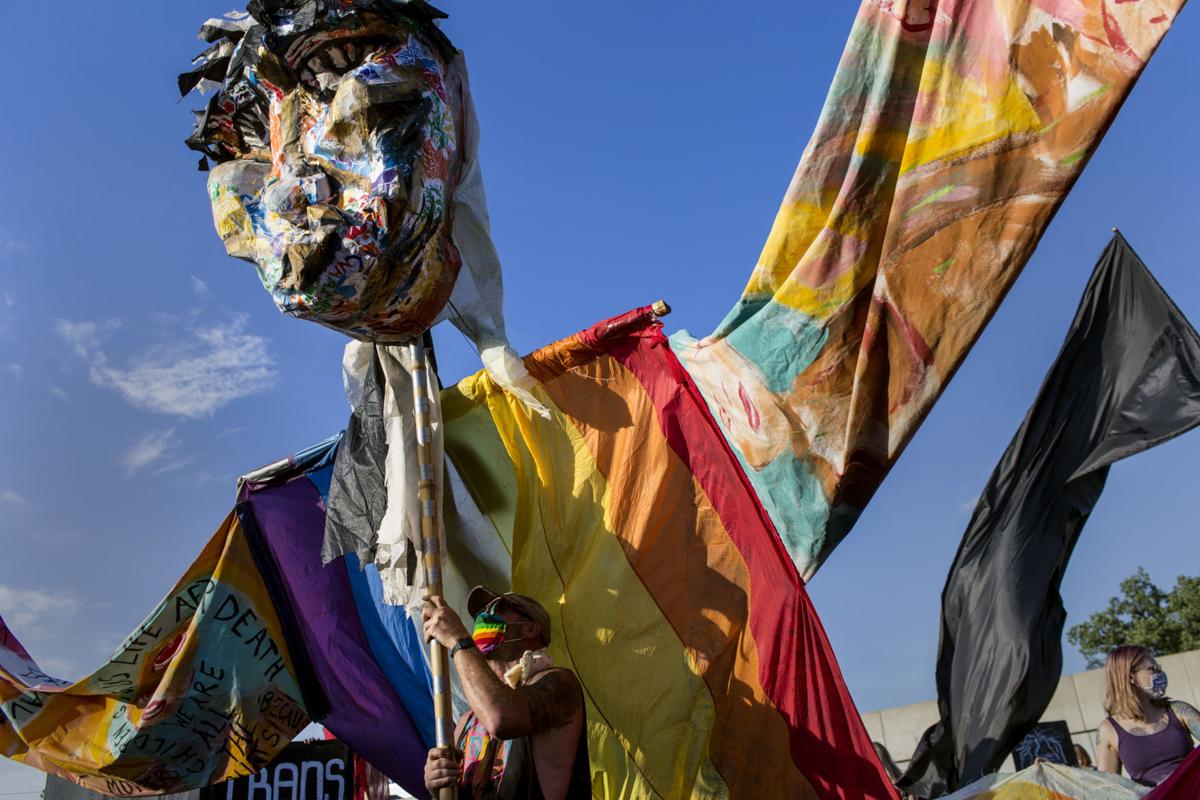 Mike Dulin (center) of All the Saints Theater Company carried a puppetry figure during the Stonewall Rising: LGBTQ March for Black Lives on Saturday in Richmond. 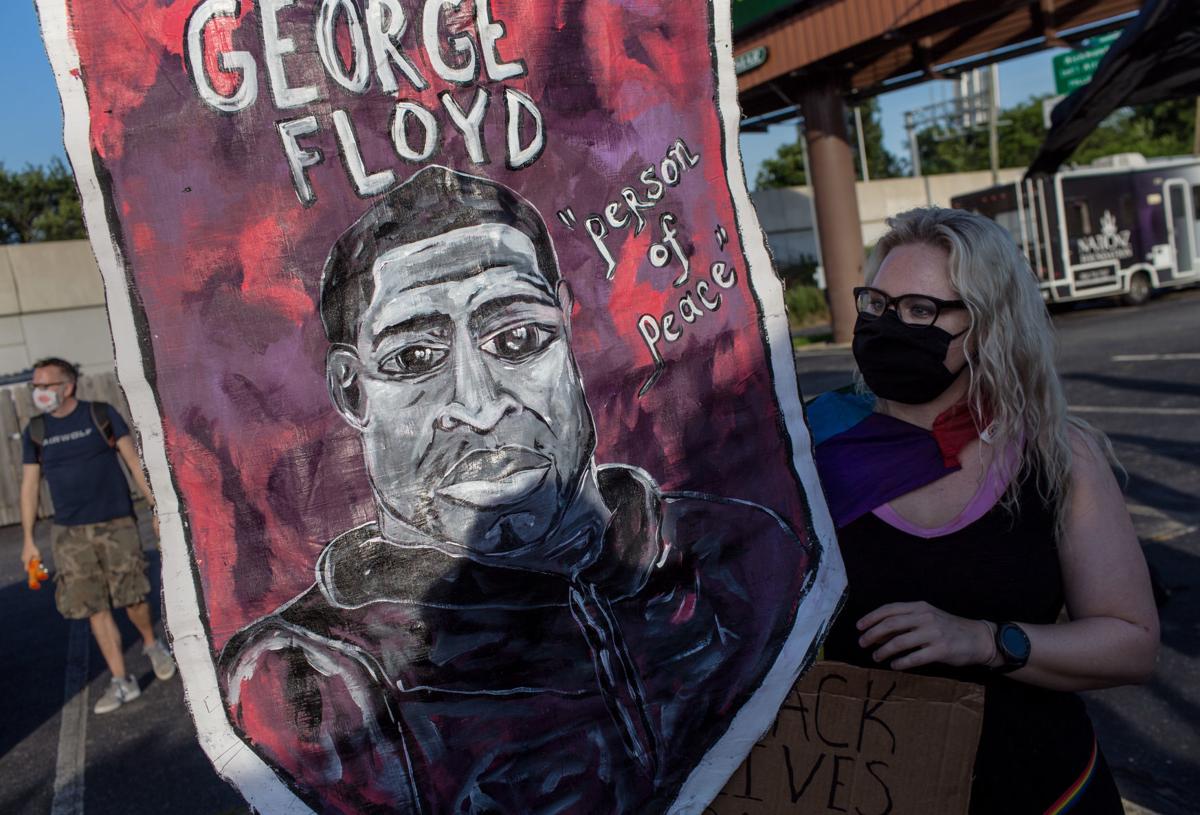 Kathryn Heckroth of Charlottesville holds a banner with the portrait of George Floyd as Heckroth attends Stonewall Rising: LGBTQ March for Black Lives at Diversity Richmond in Richmond on Saturday, June 27, 2020. 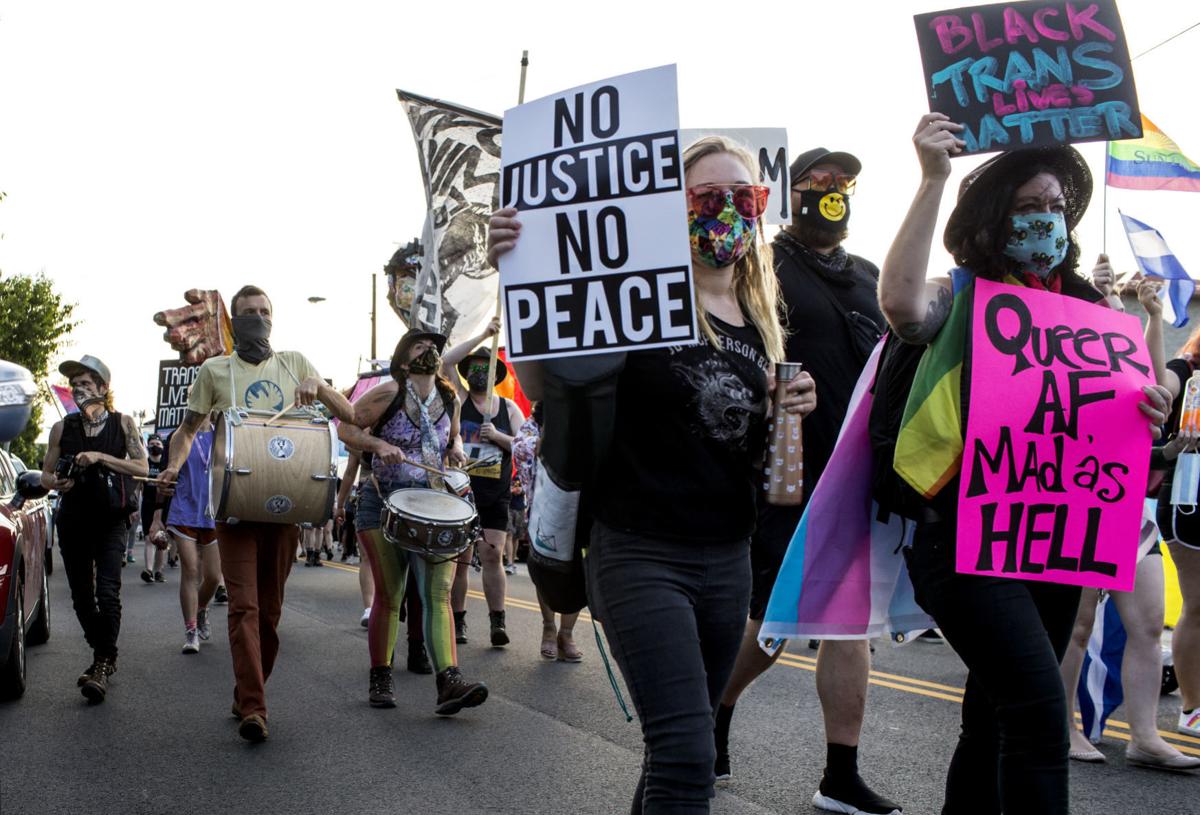 Participants in a pride march walked from Diversity Richmond to a city police training academy Saturday. 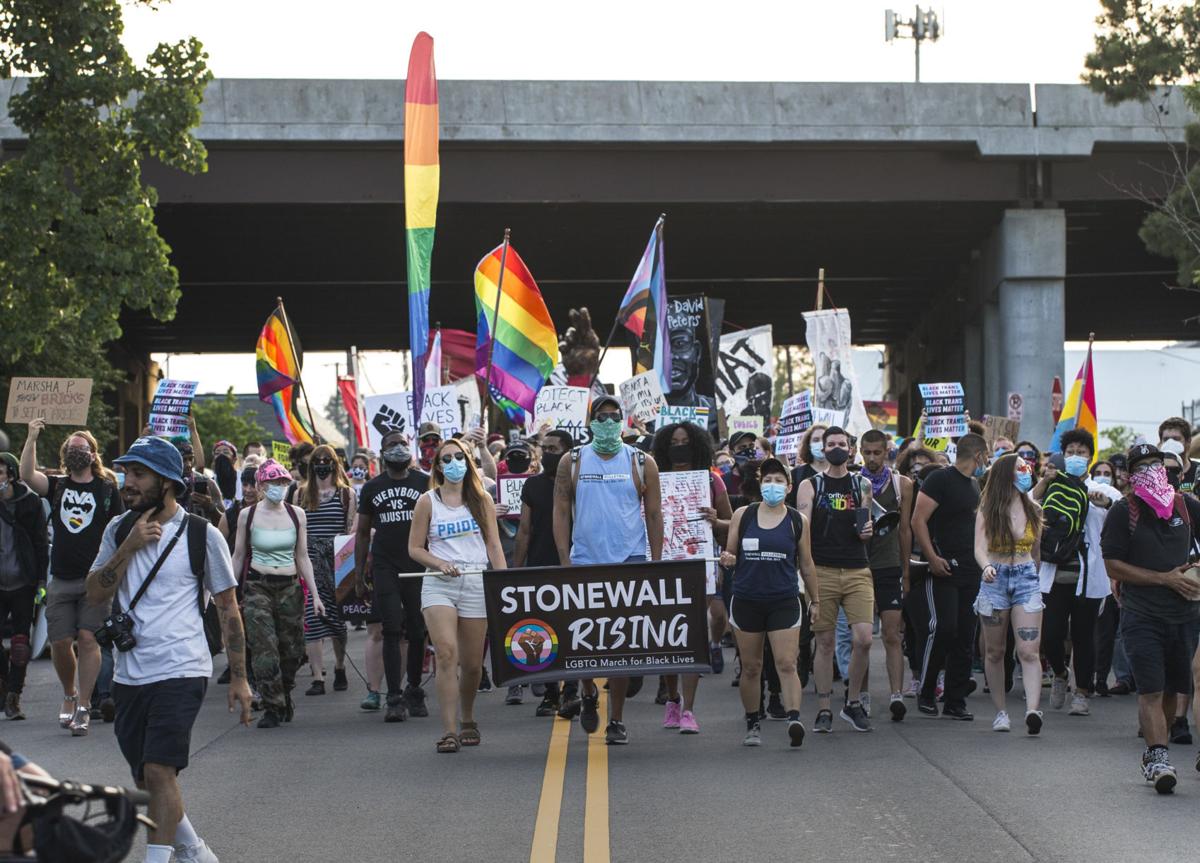 When Stephanie Merlo saw the police killing of George Floyd, she was brought back to when she was 7 years old in Texas, sitting alongside her father in his old pickup truck when the police sirens came on behind them. They ripped him from the car due to an unpaid ticket, threw him to the ground and pressed a knee into his back that restricted his breathing.

They were lucky, she said, that he didn’t end up like George Floyd. Instead, they were both put in the backseat of the police car. The video of Floyd’s death spurred rage and a desire to enact change in Richmond, where she’s the president-elect of Virginia Pride.

But as Pride Month overlaps with the Black Lives Matter movement that’s cried out against police brutality, Merlo said it serves as a reminder that these movements have never existed without the other.

Racism heavily pervades the LGBTQ rights movement, whose leaders at the Stonewall Inn 51 years ago were predominantly trans women of color. Black transgender and queer people have been on the front lines of Black liberation, Merlo said, yet frequently removed from the narrative and replaced by white gay male counterparts.

She moved to address this past and present on Saturday through the LGBTQ march for Black lives that started at Diversity Richmond and marched to the Richmond Police Training Academy on Graham Road.

A crowd of over three hundred sat around a makeshift stage prior to the march, listening as Richmond-area organizer Rebecca Keel called back to the Stonewall riots that had begun 51 years prior, almost to the day.

“The first pride was a riot against the police,” Keel said. “We have to remember that.”

Keel had asked the crowd to sit for a moment as organizers spoke, in order to rest their legs.

Protesters donning pride gear — rainbow suspenders and socks, face masks in the blue and pink of the transgender pride flag — had gathered in the parking lot of Diversity Richmond for the Stonewall Rising March for LGBTQ Black Lives. Before a short series of speakers took the stage, volunteers moved throughout the crowd, handing out posters stating “Black Trans Lives Matter” and “No Justice No Peace.” Others offered free condoms, or directed protesters into the building for free HIV testing, which they said would return results within a minute.

Among those early to arrive were Henree Josey and Dalia Burks, who are engaged. The couple had been to several protests together; one ended in police violence early last week.

They had been a part of the group that gathered in what protesters dubbed “Reclamation Square” outside of City Hall, but had left before police began using chemical irritants to disperse the crowd.

The couple came to the Stonewall Rising march in hopes of challenging mainstream narratives that ignore the role of LGBTQ people, and trans people specifically, within the current protests against police brutality. Both Josey and Burks are Black and nonbinary, and have struggled to be heard — both within the Black Lives Matter movement and within the city.

Burks, for example, had been having a conversation with someone about colorism, but was struck down when she asked the person she was speaking with to include trans and nonbinary people in that discourse.

“She was telling me that it was not a time and place to talk about trans people,” they recalled.

This was just one of several times Burks had struggled to convince fellow protesters and activists to “share Black nonbinary and trans people in their narratives.

”For Josey, whose shirt depicted a Black power fist circled by the rainbow colors that have become emblematic of the LGBTQ community, the erasure of nonbinary and transgender identity extends well beyond the ongoing protests. They feel it almost every day living as a nonbinary person in Richmond.

“It’s definitely a struggle to even be recognized for who you are by the government, by doctors,” Josey said. “As somebody who has transitioned medically from one gender to another, even being nonbinary is something that people can’t grasp. Doctors ... will refer to me just as a male.”

Mike Dulin (center) of All the Saints Theater Company carried a puppetry figure during the Stonewall Rising: LGBTQ March for Black Lives on Saturday in Richmond.

Kathryn Heckroth of Charlottesville holds a banner with the portrait of George Floyd as Heckroth attends Stonewall Rising: LGBTQ March for Black Lives at Diversity Richmond in Richmond on Saturday, June 27, 2020.

Participants in a pride march walked from Diversity Richmond to a city police training academy Saturday.