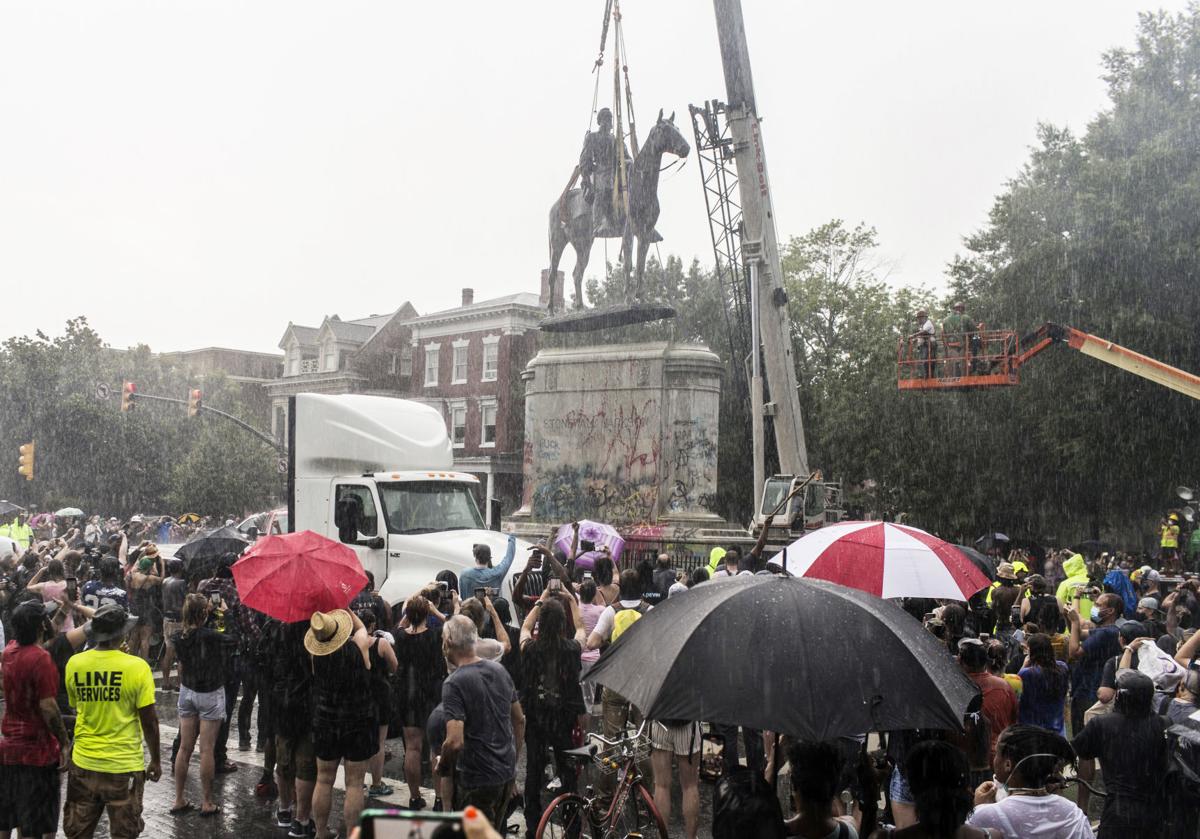 Crowds gather to witness the removal of the Stonewall Jackson statue in Richmond on Wednesday, July 1, 2020. 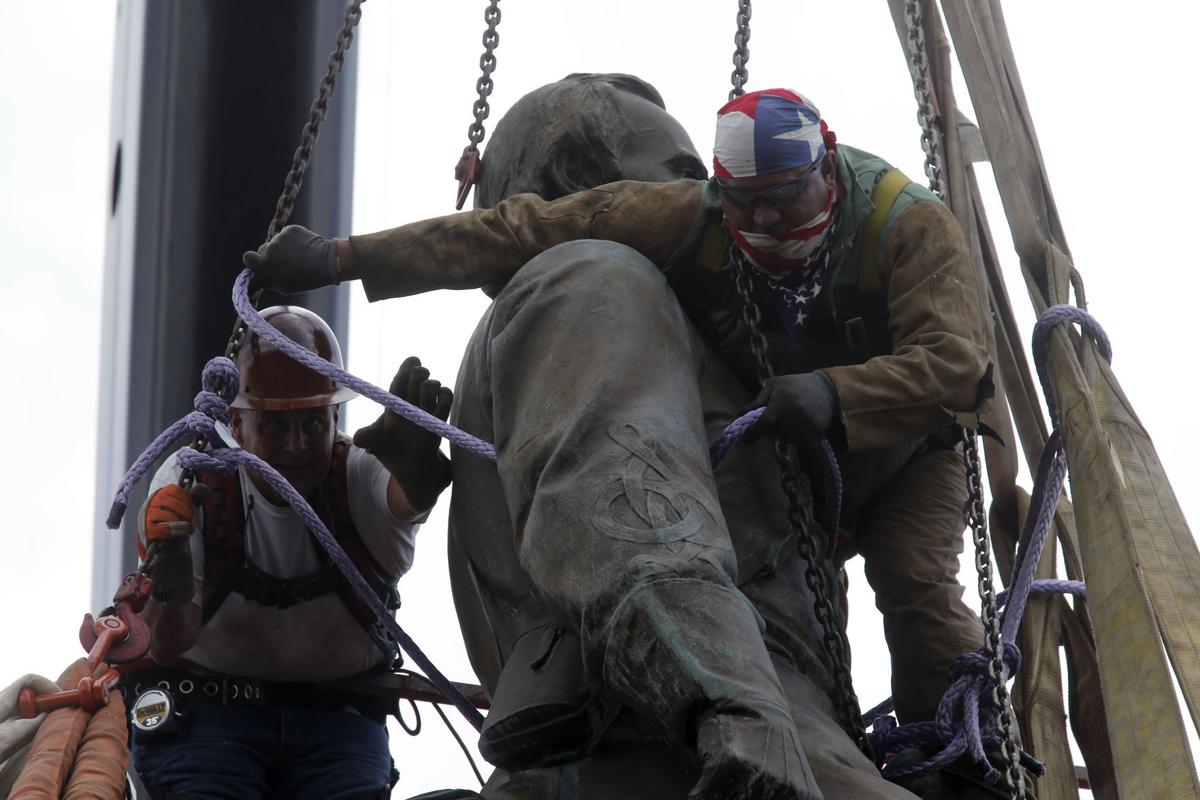 Workers placed straps around the statue of Stonewall Jackson prior to removing it from its pedestal. 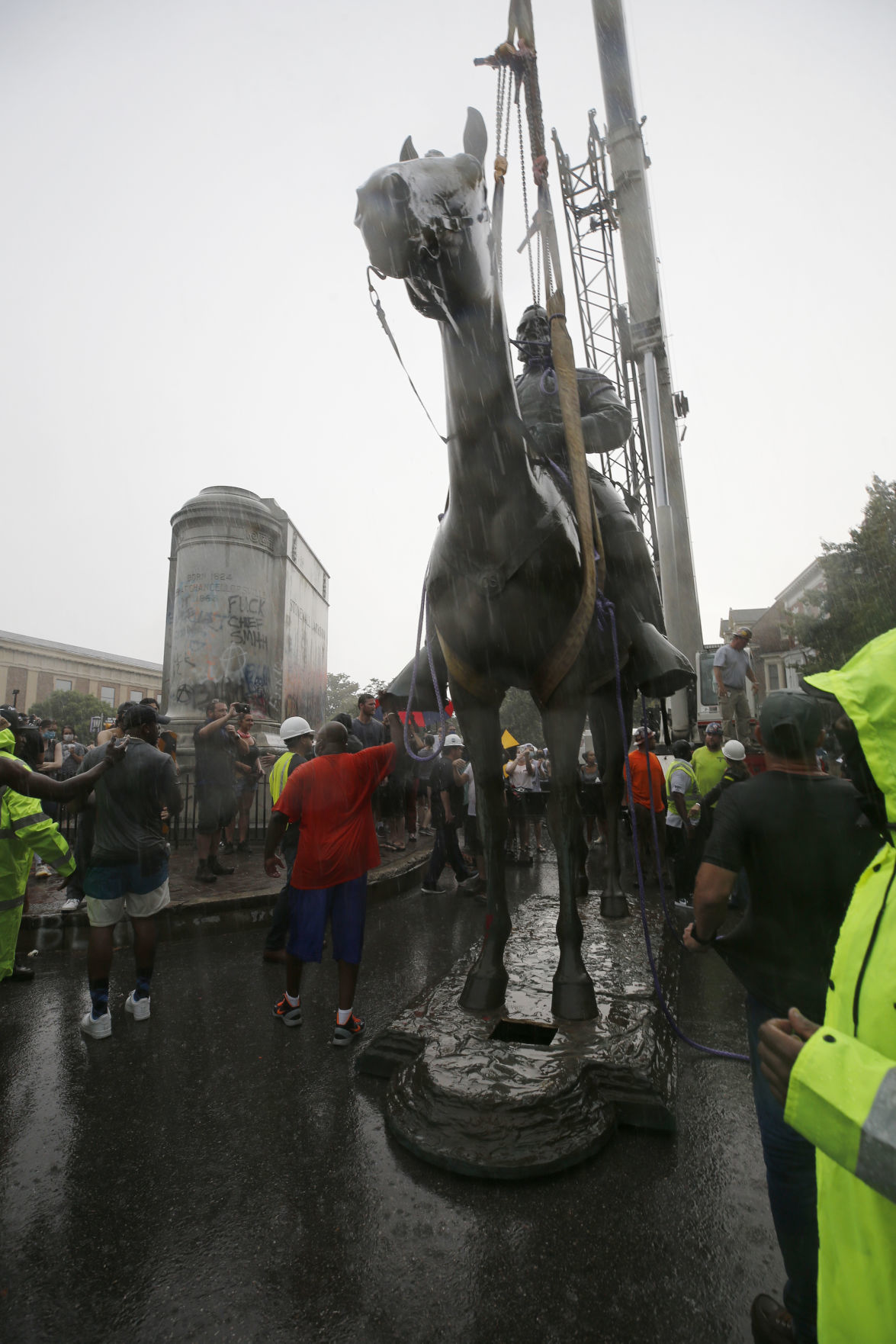 The Stonewall Jackson monument sits on the street after being removed in the midst of an intense rainstorm in Richmond, VA Wednesday, July 1, 2020. 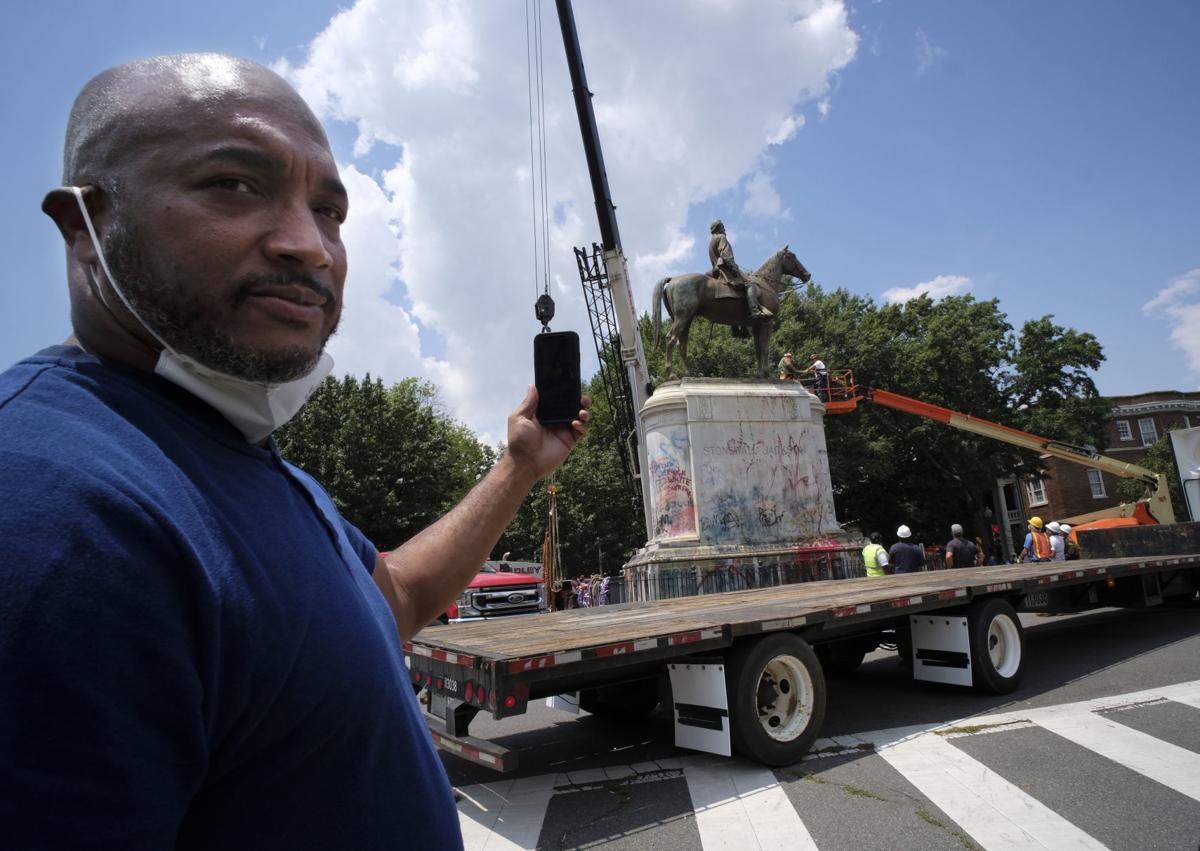 City Council member Michael Jones, who has advocated for removal of the city’s Confederate monuments, took a photo Wednesday. 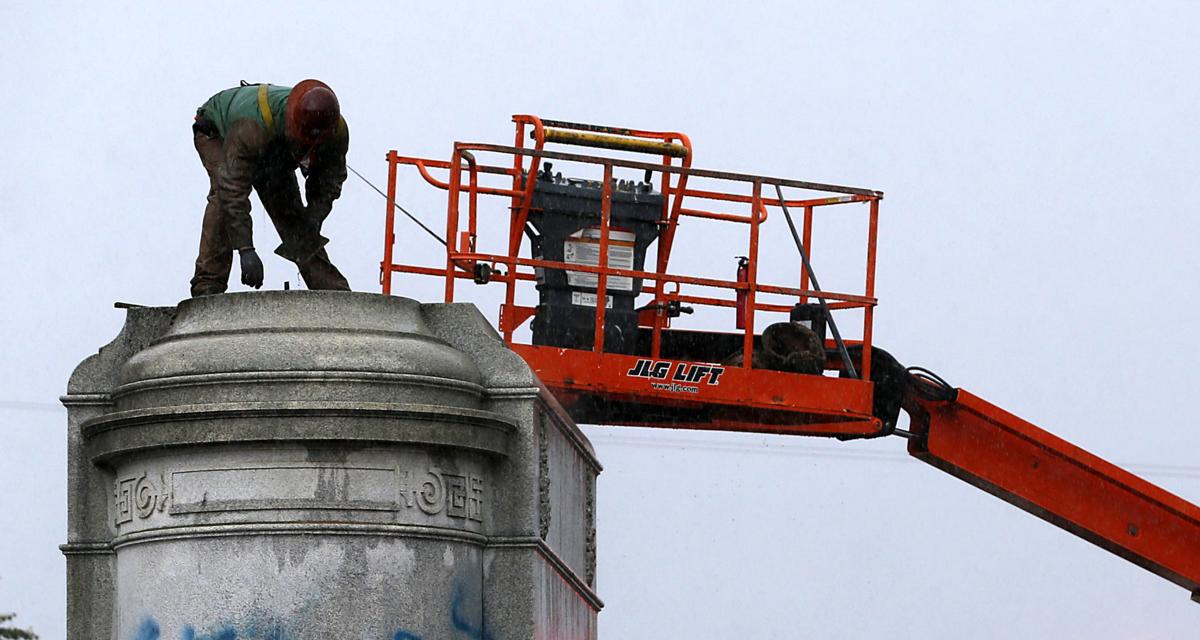 A worker stands on top of the pedestal after the Stonewall Jackson statue was removed from it on Arthur Ashe Boulevard Wednesday, July 1, 2020. 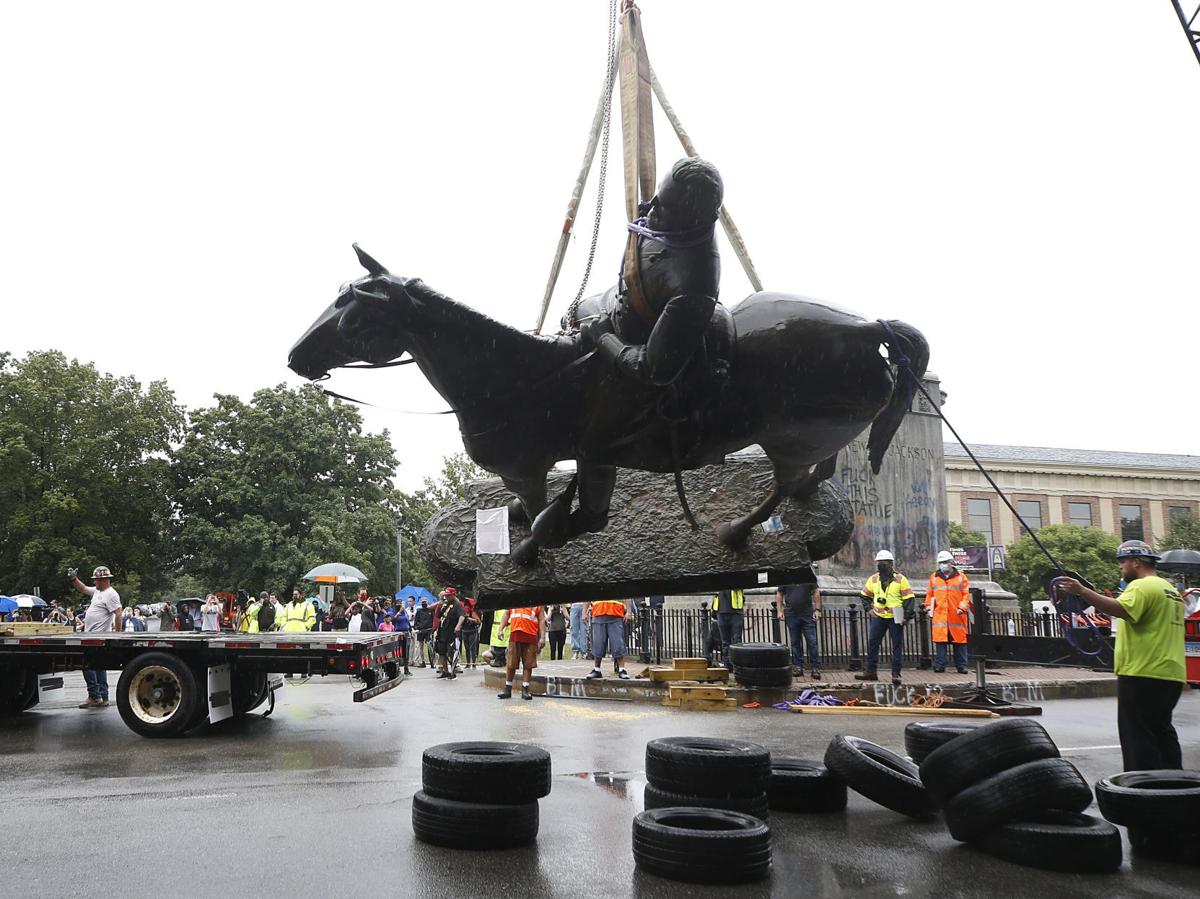 Workers place the Stonewall Jackson statue on a truck after removing it from Arthur Ashe Boulevard on Wednesday, July 1, 2020.

Cast in bronze astride a horse, the statue of Confederate Gen. Thomas “Stonewall” Jackson had towered over Monument Avenue for a century.

To cheers, a crew of workers dispatched by Richmond Mayor Levar Stoney on Wednesday hoisted the 6-ton statue from its pedestal. More than 1,000 people at the intersection of Monument Avenue and Arthur Ashe Boulevard waited for hours, braving lightning and a downpour to witness the historic moment.

“Frankly, it’s time to heal,” Stoney said hours earlier, as he lobbied the City Council to back the immediate removal of all of Richmond’s Confederate monuments.

After a calamitous month, it was a moment of catharsis for residents who have long called for the monuments to come down.

“Anybody that takes the time to examine the history of Richmond and Monument Avenue would probably agree that these were put here to help to sell a segregated community,” said Daniel Farren, who came to see the removal. “This should’ve happened a long time ago.”

“Surreal” was the word Ana Edwards used to describe the moment.

“We actually didn’t think we would see them come down,” said Edwards, chair of the Sacred Ground Historical Reclamation Project of the Virginia Defenders for Justice, Freedom and Equality. “We didn’t think we would get to a place where they would actually come down. This is the culmination of decades of frustration of Richmonders, of having to tolerate [the monuments’] existence.”

As significant as the removal was, Edwards said crucial work remained to undo the systemic racism represented by the statues. She cited a wave of pending eviction cases against city residents in the wake of the COVID-19 crisis. Protesters were arrested at the Richmond courthouse hours before the crane lifted Jackson from his pedestal.

“Taking the statues down is a part of the process, but we have to do the real work,” she said.

Protests against police brutality and racism have gripped the city for 4½ weeks since the killing of George Floyd by Minneapolis police. Daily demonstrations in Richmond increasingly centered on Monument Avenue, home to the country’s most prominent statues honoring Confederate leaders in what is the former capital of the Confederacy.

Protesters decried the monuments as emblems of white supremacy and the racism that is foundational to life in America. They demanded that city leaders tear them down.

What had been a perennial debate in the city quickly gave way to political consensus among elected officials. Stoney pledged to take the monuments down, and all nine City Council members said they would support doing so when a new state law took effect July 1.

In the meantime, protesters took matters into their own hands, toppling several smaller tributes to the Confederacy and pulling down the statue to Confederate President Jefferson Davis on Monument Avenue. Last week, they tried to pull down the statue depicting Confederate Gen. J.E.B. Stuart before Richmond police declared an unlawful assembly and launched tear gas.

In the aftermath of that incident, some on the City Council called for immediate removal of the statues, fearing injuries or an accidental death.

Last month, a man was seriously injured as protesters in Portsmouth sought to topple a statue there. The incident prompted Norfolk to accelerate its plans to take down a Confederate statue on public display.

The new state law requires an administrative process of at least 60 days for a locality to remove its statues. However, Stoney said Wednesday that the monuments had become threats to public safety.

Bucking advice from the city attorney, Stoney said he would remove the statues using the emergency authority he said he possesses.

The mayor’s declaration came at a special meeting of the council originally scheduled to set in motion the state-outlined removal process and introduce policing reform. Instead, Stoney asked council members to endorse a resolution he had drawn up for immediate removal.

However, Brown said, any contention that Stoney has the authority to remove the statues outside of the state process would contradict legal advice he has previously given city leaders. He cautioned that it could draw litigation.

The council decided to schedule a special meeting for Thursday at 1 p.m. to vote on the matter, allowing Brown’s office time to review the resolution and meet public noticing requirements necessary for a formal vote. The meeting was later canceled.

“I think we need to act today, and we will act immediately,” Stoney said shortly before Wednesday’s meeting adjourned.

About an hour later, crews arrived at the Jackson statue. A crowd began forming soon after, as word spread that the monument’s removal was imminent.

Council member Michael Jones, who represents the 9th District, has publicly pushed to remove the statues since the white supremacist Unite the Right rally in Charlottesville in 2017. With the ongoing unrest, Jones said he feared that a similar event could unfold on Monument Avenue if the city didn’t remove the statues.

Crews loaded it onto a flatbed truck and took it to storage, where it will stay until the City Council can go through the 60-day administrative process to determine its future, Stoney said.

It’s unclear when crews might remove the statues of Confederate Gen. J.E.B. Stuart or Confederate naval commander Matthew Fontaine Maury, or other such iconography around the city.

The state-owned Robert E. Lee monument is the subject of an ongoing legal fight. A Richmond judge recently extended an injunction barring Gov. Ralph Northam from moving it.

Stoney told the council that removing the statues would cost $1.8 million. A private fundraiser was underway to reimburse the sum to the city, he said.

The procedural questions mattered little to those standing in the downpour Wednesday.

Soaked to the bone, they endured to witness a moment many thought may never come.

11:05 a.m.: Crews have moved on to Monroe Park where they will be removing a statue of Joseph Bryan and a memorial to Confederate Gen. Fitzhugh Lee.

Crowds gather to witness the removal of the Stonewall Jackson statue in Richmond on Wednesday, July 1, 2020.

Workers placed straps around the statue of Stonewall Jackson prior to removing it from its pedestal.

The Stonewall Jackson monument sits on the street after being removed in the midst of an intense rainstorm in Richmond, VA Wednesday, July 1, 2020.

City Council member Michael Jones, who has advocated for removal of the city’s Confederate monuments, took a photo Wednesday.

A worker stands on top of the pedestal after the Stonewall Jackson statue was removed from it on Arthur Ashe Boulevard Wednesday, July 1, 2020.

Workers place the Stonewall Jackson statue on a truck after removing it from Arthur Ashe Boulevard on Wednesday, July 1, 2020.