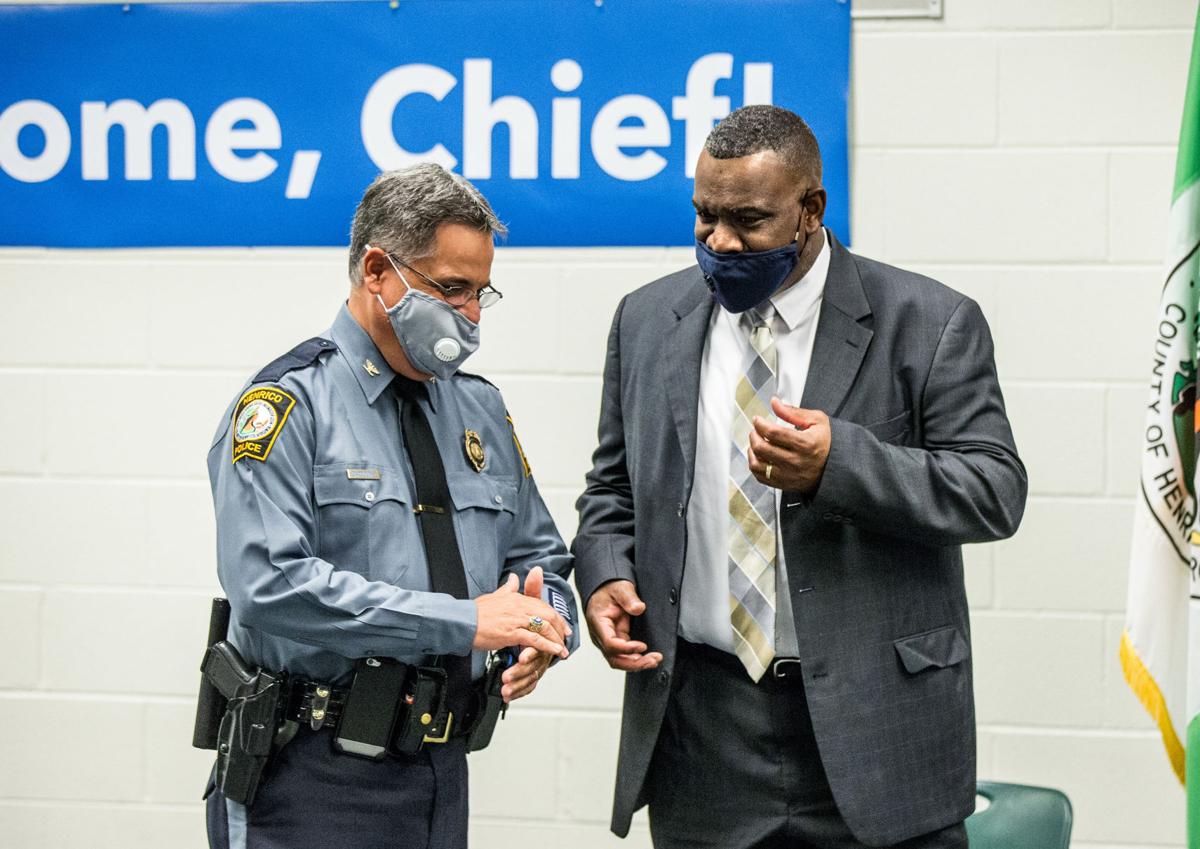 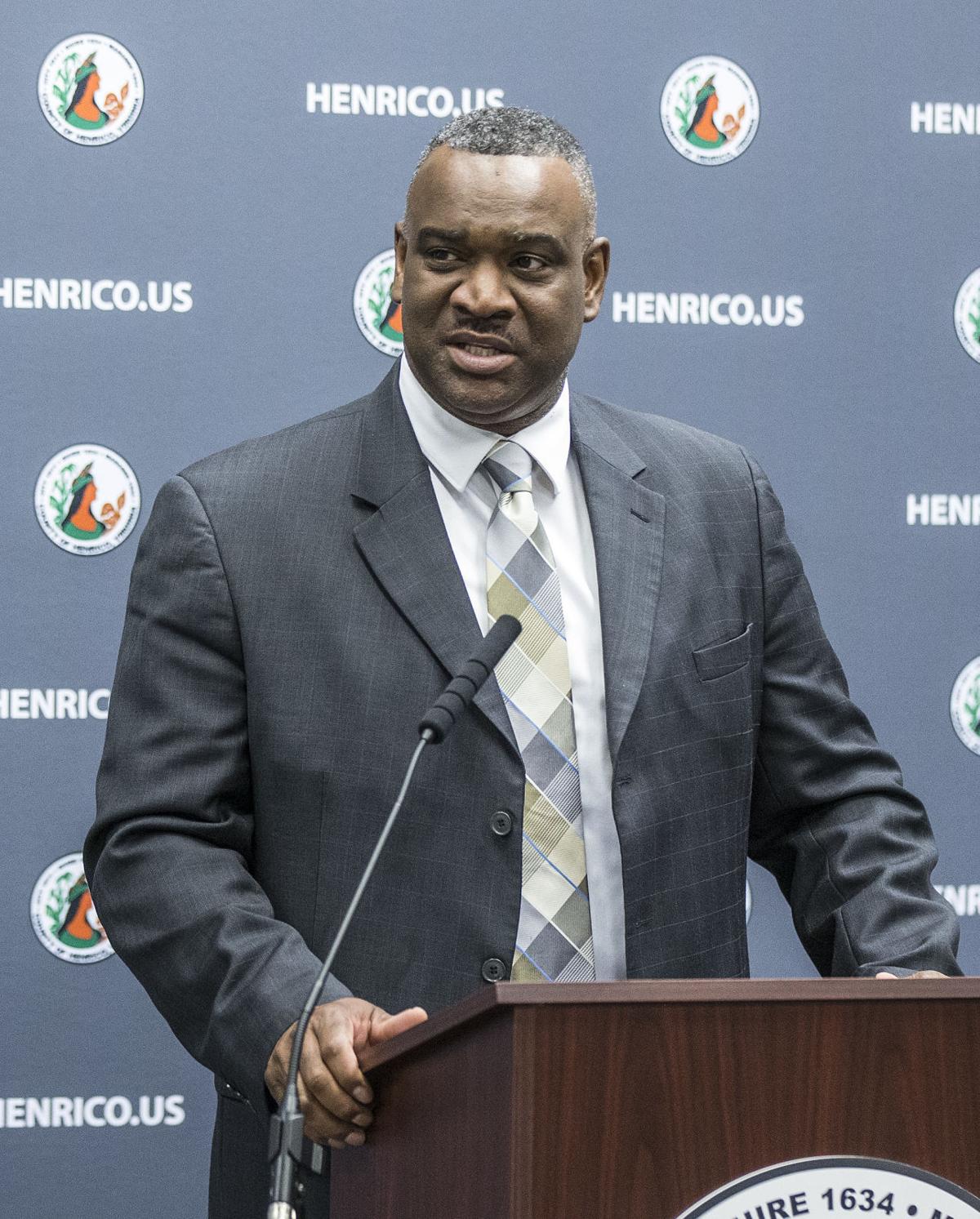 Eric English, currently the Harrisonburg police chief, graduated from the University of Richmond in 1989. 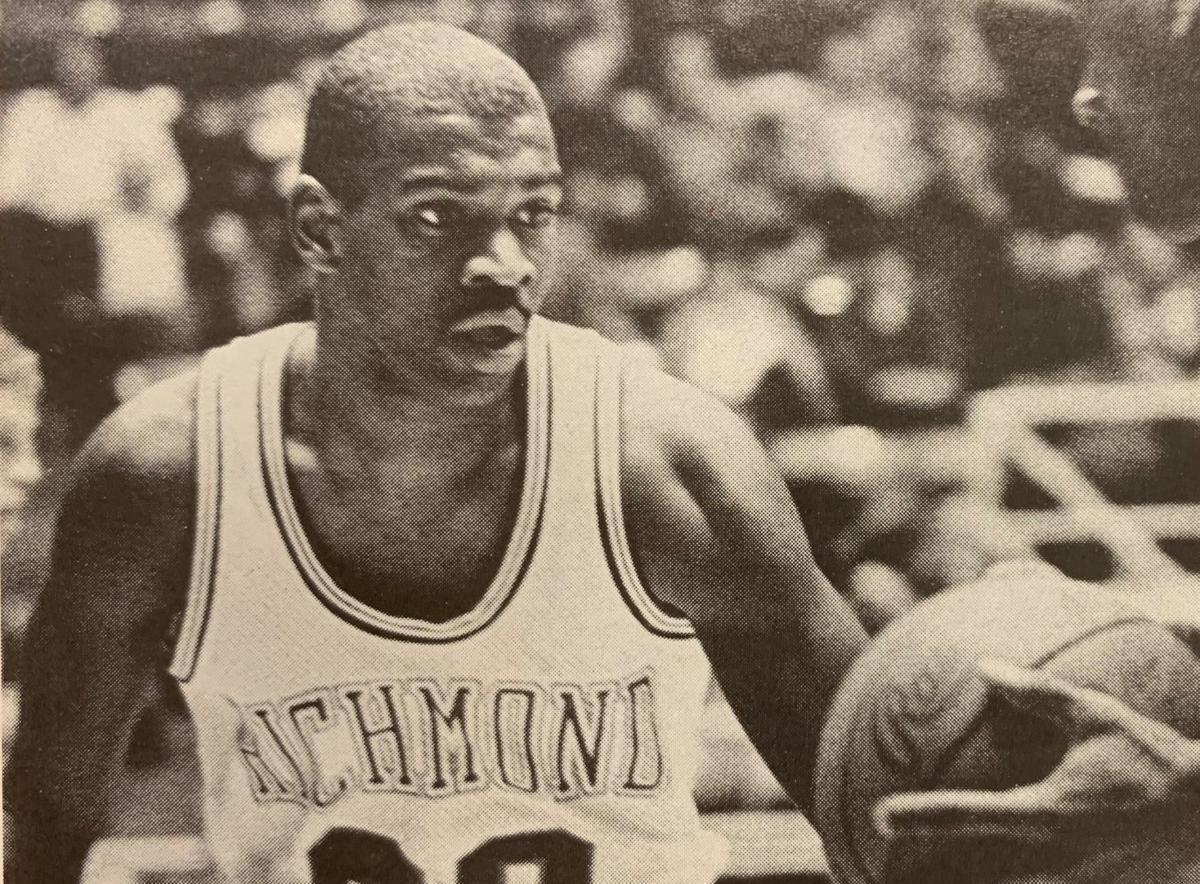 Guard Eric English played on two NCAA tournament teams and an NIT team while at the University of Richmond from 1986 to 1989. He averaged 4.9 points, 1.7 rebounds and 1.6 assists in 115 games. 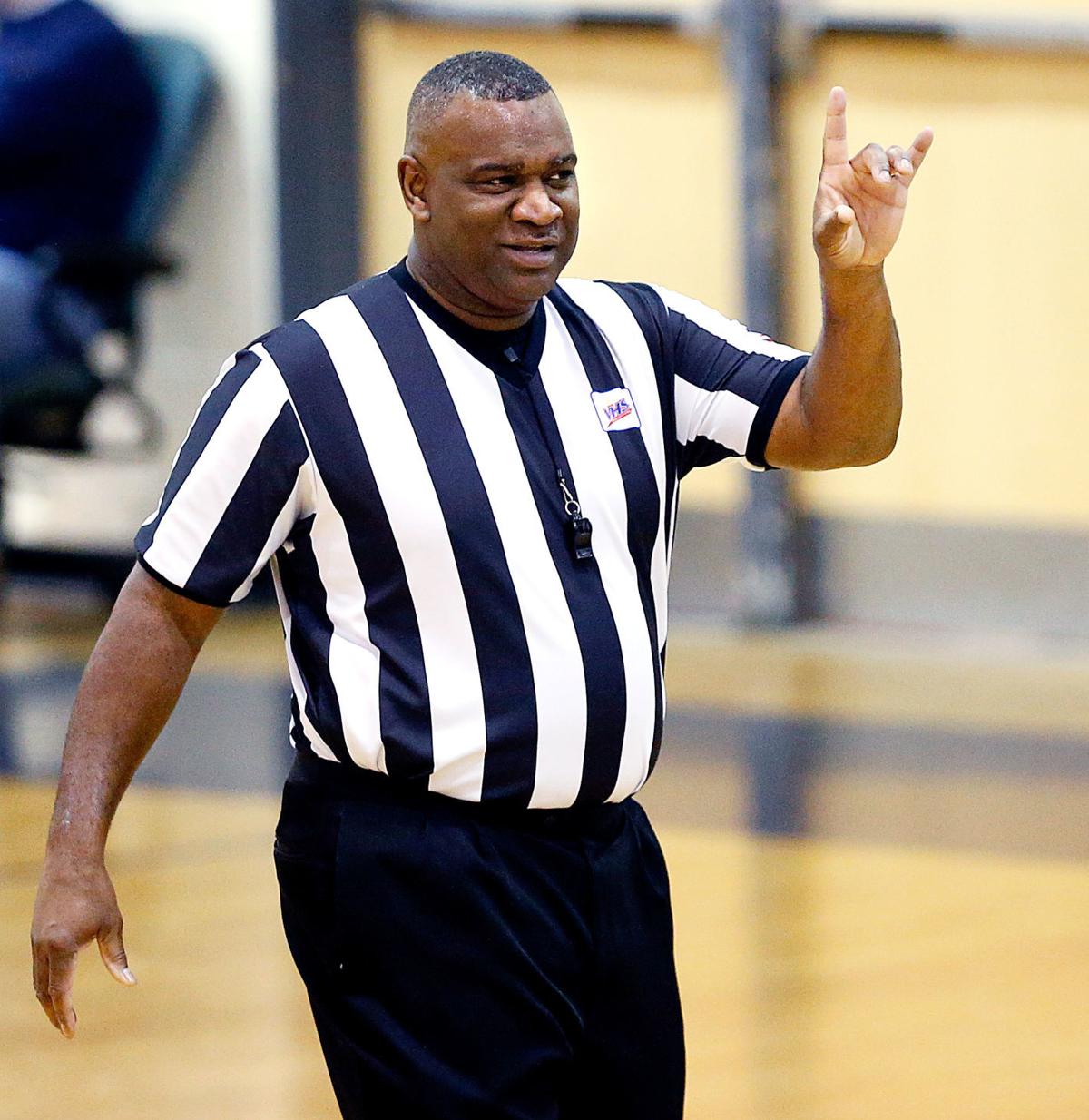 Eric English was a longtime official of high school basketball games in the Richmond area. 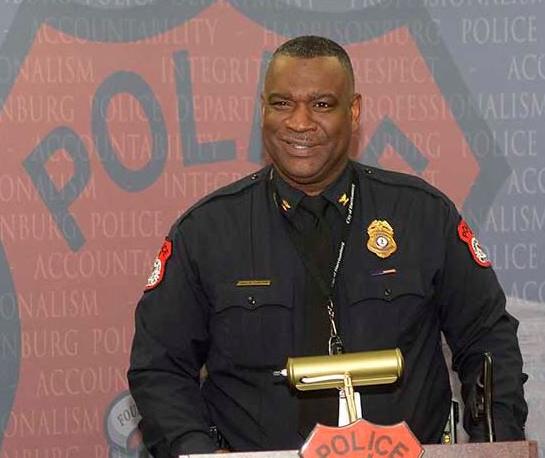 Eric English has been Harrisonburg’s chief of police since September of 2018. As a senior guard, he averaged 12 points on the University of Richmond’s 1989 NIT team.

English, a former deputy chief for the Richmond Police Department, will succeed Humberto “Hum” Cardounel Jr., who on June 22 announced his plans to retire from the post.

According to the county, English will begin on Sept. 14.

“This is a golden opportunity — not just for myself — but also for this agency to ensure what police will look like in these times,” English said at a news conference Monday. “These are very difficult times, but I know we’re up to the task.”

Prior to becoming Harrisonburg’s police chief in 2018, English had spent almost all of his law enforcement career in the Richmond Police Department. Starting out as a patrol officer in the city not long after graduating from the University of Richmond as a criminal justice major in 1989, English became a deputy chief for the city’s police department in 2011.

The leadership changes come amid ongoing protests across the nation over racial injustice and police brutality. While Richmond police have drawn criticism over the department’s handling of protests in the city this summer, Henrico has been relatively quiet, although some county leaders are seeking reforms to improve accountability and community relations.

The proposal for a civilian oversight board, which was first introduced in June by Supervisor Tyrone Nelson, a Democrat, has divided the Board of Supervisors along racial and party lines. Board member Pat O’Bannon, a Republican, has shared reservations; the remaining two Republican supervisors have yet to share their opinions. Supervisor Frank Thornton, also a Democrat, supports the move.

In an interview Monday, Supervisor Dan Schmitt said he’s been reluctant to say what he thinks for fear of discouraging input from anyone who is for or against the idea.

“I don’t think it’s my job to state now, in this phase, what I believe and to persuade my constituents,” he said. “My job is to listen to their opinions and let that dictate the work I do.”

At a Board of Supervisors work session Monday evening, county officials discussed the current public complaint process against police.

Schmitt said that information should be publicized alongside the data. Nelson, however, said that is still too many complaints, and that some people never file complaints because they think the department will not hold its officers accountable.

The disclosure of the number of complaints does not include information about the nature of the complaints or demographic data.

Nelson suggested that more demographic data and details about the complaints and police stops could be shared. Schmitt agreed.

“The numbers are important. Not just the overall numbers that make us look good as a department,” Nelson said. “The only way we’ll get better is if we look into the numbers. And we’re not getting into that.”

In a recent interview with the Richmond Times-Dispatch, English said he agrees that there is a need for some policing reforms. On Monday, he did not say what he thinks of the ongoing discussion in the county government about the creation of a civilian oversight panel for the police department or what other specific reforms he thinks are necessary.

“I need to get a better feel on the issues,” he said in an interview. “I think I need to be involved in that discussion before I make a determination.”

English was not in attendance at Monday evening’s board meeting.

There was no broad public input during the search for a new police chief.

During the news conference, County Manager John Vithoulkas said the county partnered with professional law enforcement experts and the Virginia Association of Chiefs of Police during the search process. In an interview afterward, he said he also spoke with some community members but declined to specify with whom he discussed choosing candidates.

Nonetheless, two community leaders said they trusted Vithoulkas to make a strong selection and were pleased that he chose English.

“I had been in conversations about the process,” said Henrico NAACP President Rai Beasley. “I feel comfortable that my concerns and input were heard in terms of where we needed to go.”

“The county played it close to the chest — rightfully so, since it’s a personnel decision,” said Kenny Ragland, executive director of the Henrico Police Athletic League, a youth sports and community nonprofit that works with the county’s school system. “I think the right person was picked for the job.”

English, 53, is coming to a county with a population that’s more than six times the size of Harrisonburg, home of James Madison University. Both localities do share some characteristics, though. Both have fairly large, vibrant immigrant communities, with more than 50 languages spoken in each school district.

Recognizing the size and prestige of the county’s police department, Vithoulkas said it was a challenge to find someone capable of taking it over. He said more than 40 candidates applied for the job.

“We wanted someone who could continue the outstanding work of our police division and at the same time push us forward,” he said. “There’s a strong base within this division. I’ve told the chief he’s pretty much being handed the keys to a Ferrari.”

Treating the announcement of English’s hiring as a homecoming, with signs reading “Welcome Home, Chief,” Vithoulkas noted that English has owned a home in the county since 1994, where he raised his two children who are now adults. The home is located in the county’s Fairfield District, according to online property records.

“This is a very hard time to be in policing,” Vithoulkas said. “We need leaders like Eric to continue to attract the very best into that field. Policing isn’t going to go away.”

Eric English, currently the Harrisonburg police chief, graduated from the University of Richmond in 1989.

Guard Eric English played on two NCAA tournament teams and an NIT team while at the University of Richmond from 1986 to 1989. He averaged 4.9 points, 1.7 rebounds and 1.6 assists in 115 games.

Eric English was a longtime official of high school basketball games in the Richmond area.

Eric English has been Harrisonburg’s chief of police since September of 2018. As a senior guard, he averaged 12 points on the University of Richmond’s 1989 NIT team. 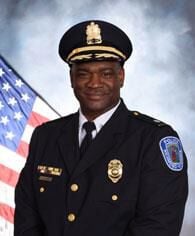 Eric English was named police chief in Harrisonburg in 2018.