“We need to learn from this:' Black residents in Richmond have five times the COVID hospitalization rate of white patients
0 Comments
Share this
1 of 2 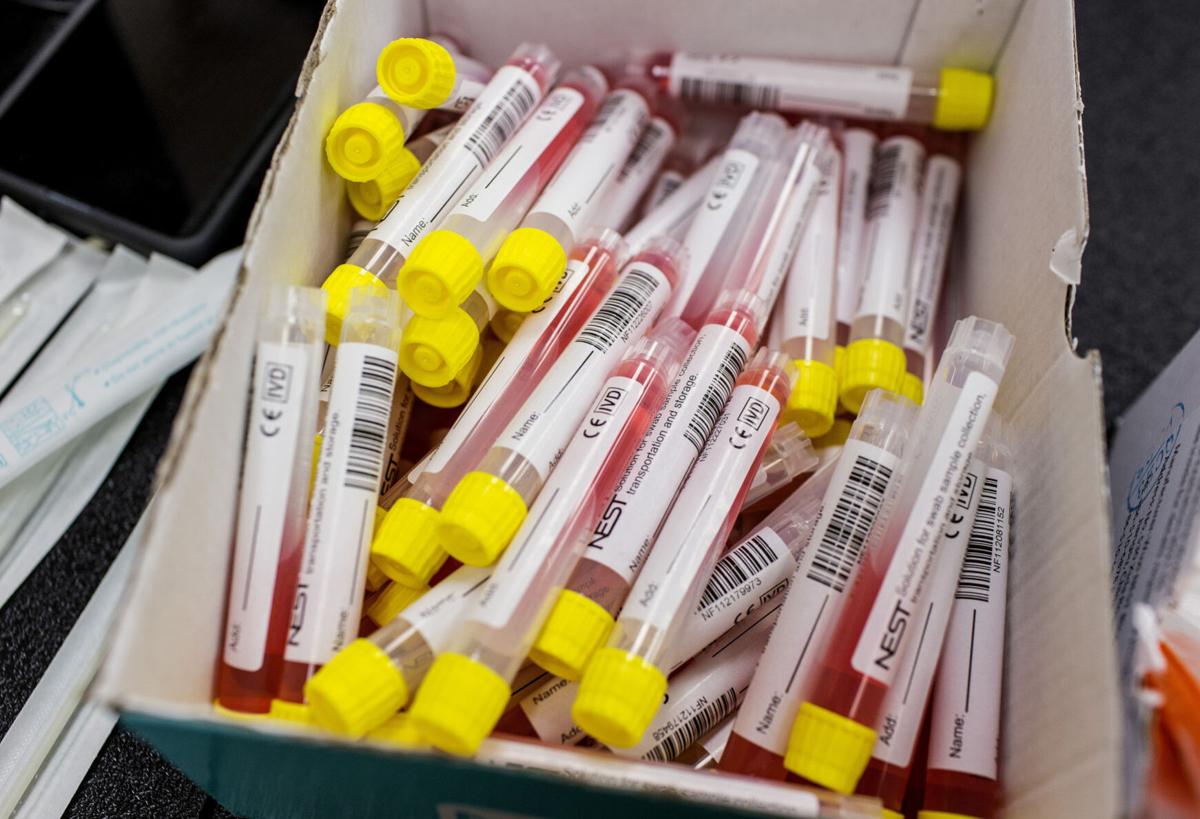 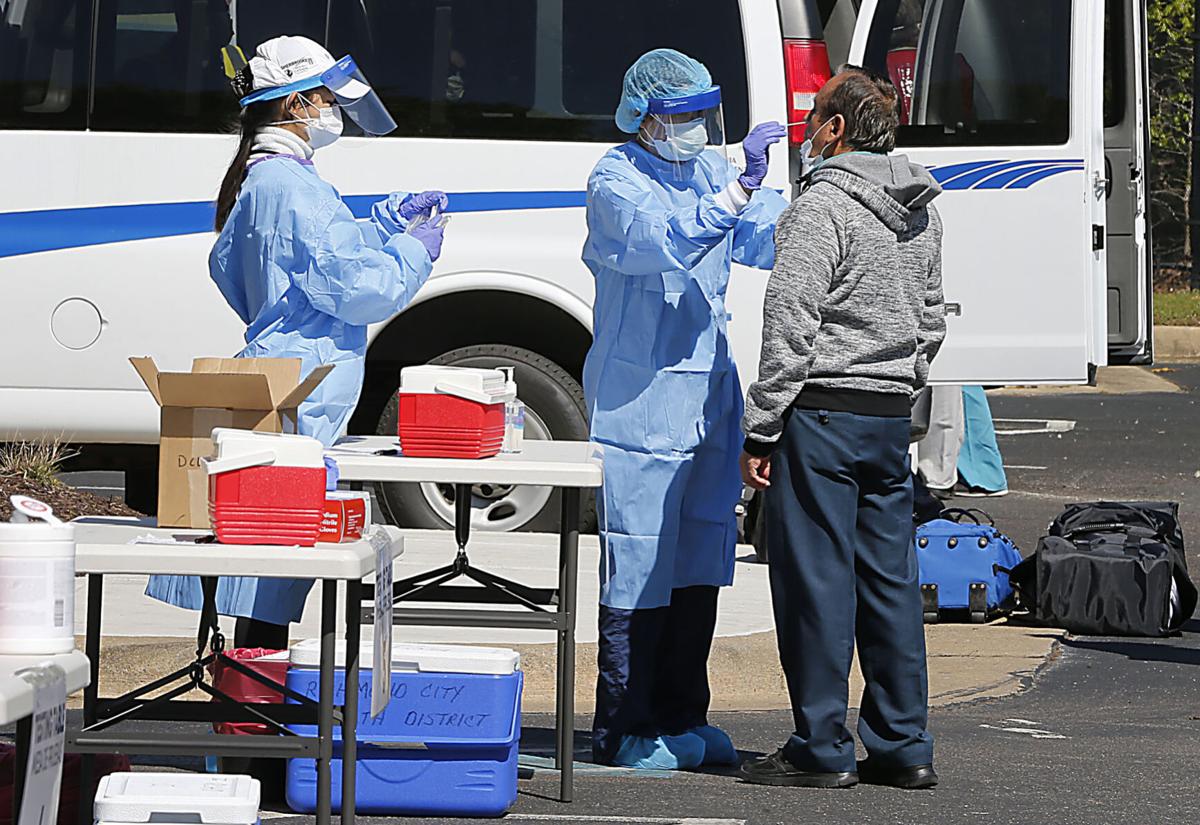 A worker did a COVID-19 test at Southwood Apartments in April. A lagging federal response for sufficient testing and a failure to grasp with data how thoroughly the virus had infiltrated Latinos’ lungs meant the burden on such neighborhoods was uncertain for months.

Black residents in Richmond are being hospitalized with COVID-19 at more than five times the rate of white residents, according to state data, despite both groups accounting for a roughly equal share of the city’s population.

The city’s disparity outpaces the nation’s, which the Centers for Disease Control and Prevention reported last week was 3.7 times higher for Black communities than white communities.

Each race accounts for just under half of Richmond’s population, but Black patients make up 61% of the city’s hospitalizations. White patients make up 12% and Latinos 23.6%, health department data shows.

But as health officials brace for an anticipated surge in cases post-Thanksgiving that could further strain testing and hospital systems, some worry the spike could exacerbate disparities.

“The speed with which this disease has taken over the health care system has just made it clearer to many of us that we lack the proper infrastructure and we lack an understanding for how to tackle the inequities that exist in health care,” said Dr. Patrick Nana-Sinkam, a VCU professor who specializes in lung cancer research and the health inequities that fuel higher rates of the disease among Black Americans.

The disparities were clear before COVID-19, he said, yet not much has changed since public health workers discussed what was partially to blame: limited access to health care, crowded living situations, higher rates of chronic disease like hypertension and diabetes and delays in seeking help due to mistrust of a system that’s failed them.

These factors also plague Richmond Latinos, who face COVID-19 related hospitalizations at 1.6 times the rate of white residents despite accounting for about 7% of the city population.

But even those numbers reported are an underrepresentation of total hospitalizations in Virginia.

The Virginia Hospital and Healthcare Association, which represents 110 hospitals statewide and publishes data from the state’s hospitals on a daily dashboard, reported Friday a total of 25,451 COVID-19 hospitalizations since the start of the pandemic — nearly 10,000 more than the Virginia Department of Health’s update Friday.

While it’s not clear where those additional hospitalizations are located within the state, one in four people hospitalized with COVID-19 from April to June was Black, according to VHHA data. White patients accounted for 32% of Virginia’s COVID-19 hospitalizations in that same time frame, but are nearly 70% of the state’s population.

This September, half of Richmond’s cases were in the 8th and 9th districts, which house the highest number of Black and Latino residents in the city. What the health department was doing then — distributing masks, connecting people with rent support and groceries to ease financial restraints with quarantining, and widening testing so people could watch for symptoms earlier — remain the response efforts months later.

Avula said a bill requiring paid leave for quarantined essential workers could have improved coronavirus outcomes, but Democratic lawmakers killed the proposal when in special session.

Meanwhile, Nana-Sinkam said he’s still seeing barriers to testing among Black communities that have historically existed with lung cancer screenings — access that could mitigate the number of people who delay care to the point that their only option is the hospital. But he knows the solution is not simple, and cannot rely entirely on a health care system to dismantle the deep-rooted segregation that predated the virus and has long depleted access to resources for Black people.

Weeks ago, a VCU report marked the metro Richmond area as the only region in the state with “severe” school segregation across racial and socio-economic lines, a worsening problem that comes with disparities in student opportunities and achievement.

Contributing to that system is a legacy of discriminatory lending practices from the 1930s detailed in recent findings from The New York Times and NPR. The policy sent poverty rates soaring, shortened life spans, removed access to green spaces and established food deserts — all of which researchers said created a petri dish for poor health outcomes generations later.

COVID-19 hospitalizations shown in VHHA data heavily overlapped with chronic conditions such as hypertension and diabetes — illnesses the CDC notes Black and Hispanic women bear at disproportionate levels. Avula said these higher rates of chronic diseases can be exacerbated by stress or lack of health care access, a factor experienced in high poverty neighborhoods.

“We need to learn from this,” said Nana-Sinkam. “If we can’t get a hold of this, how are we going to get a hold of ensuring everyone has equal access to a vaccine?”

A worker did a COVID-19 test at Southwood Apartments in April. A lagging federal response for sufficient testing and a failure to grasp with data how thoroughly the virus had infiltrated Latinos’ lungs meant the burden on such neighborhoods was uncertain for months.