When a president says it, a word is more than just a word for Richmond's Armenian community
0 Comments
Share this
1 of 4 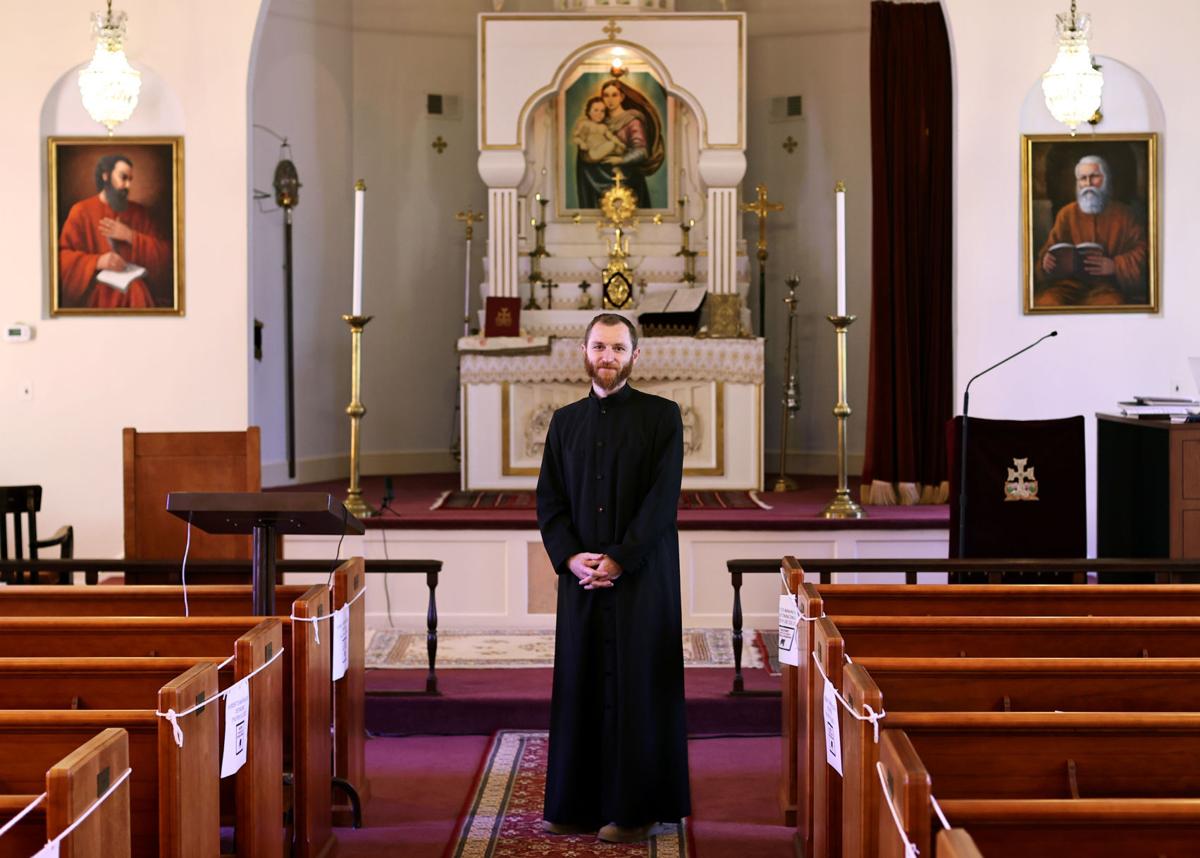 Rev. Fr. Samuel Rith-Najarian of St. James Armenian Church is shown at the church in Richmond, Va., on Wednesday, April 28, 2021. 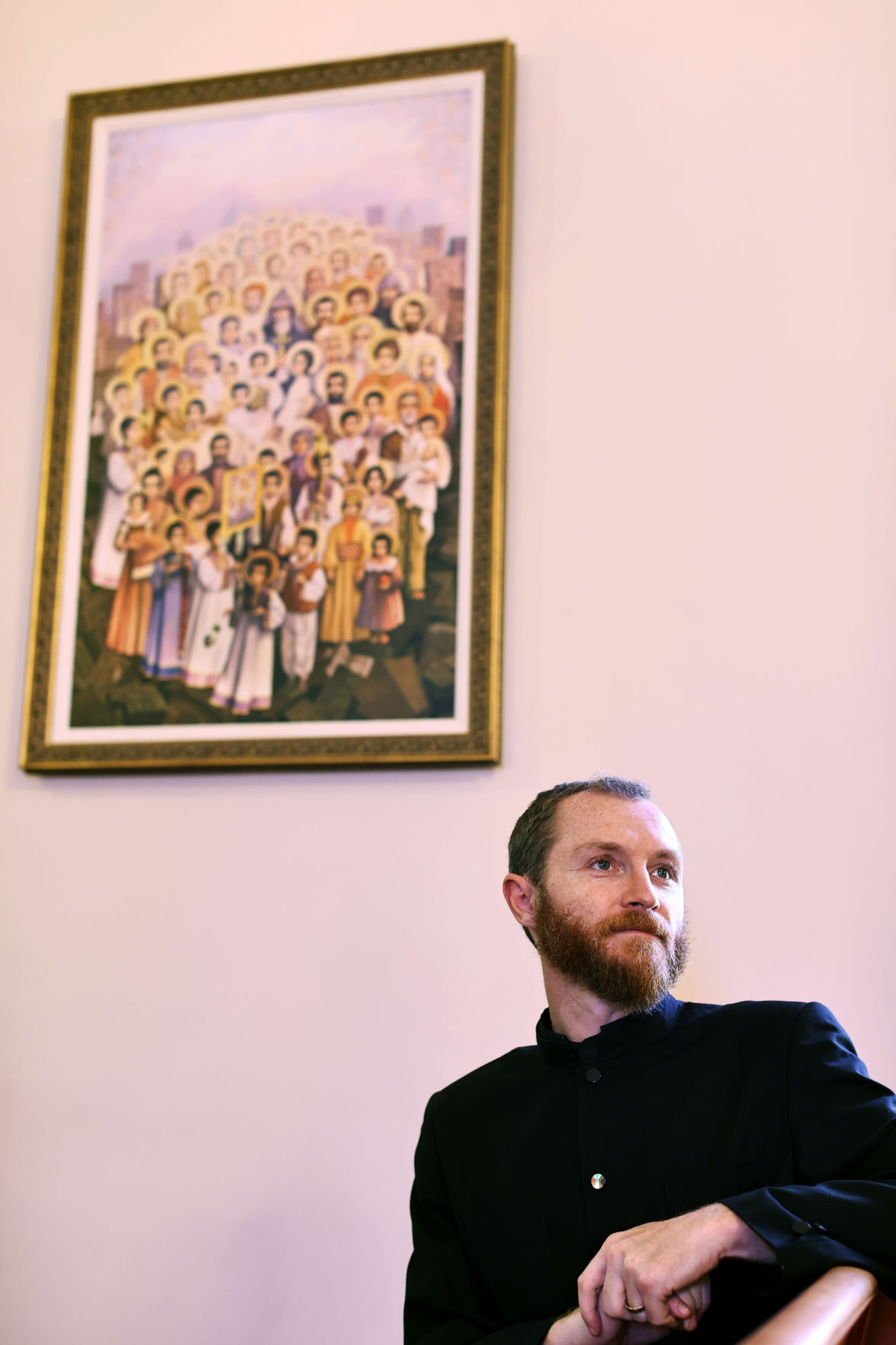 Rith-Najarian’s great-grandmother was orphaned at 13, her parents killed in front of her during the Ottoman campaign; the painting is “Holy Martyrs of The Armenian Genocide.” 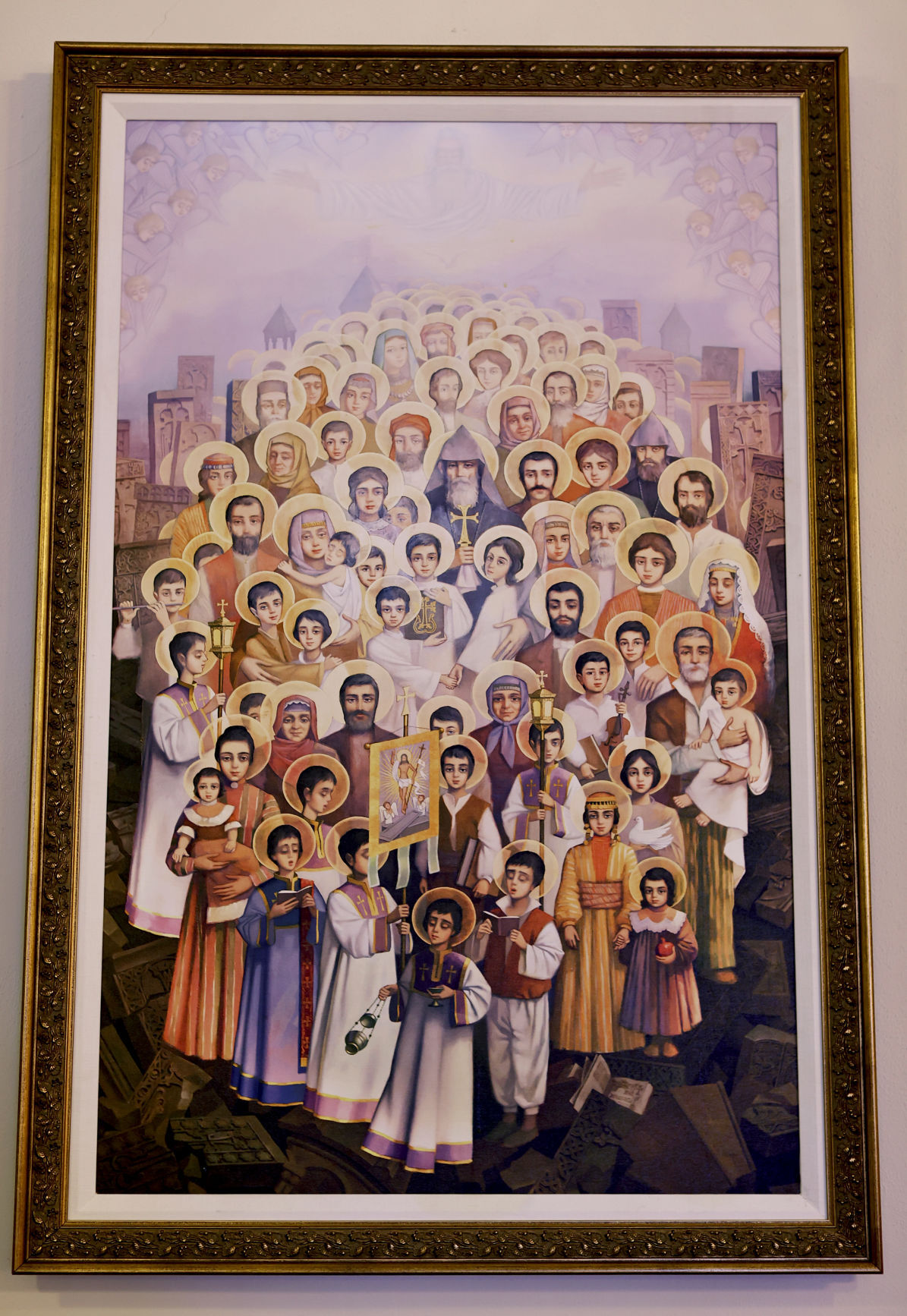 The painting of “Holy Martyrs of The Armenian Genocide” is hung at St. James Armenian Church in Richmond, Va., on Wednesday, April 28, 2021. 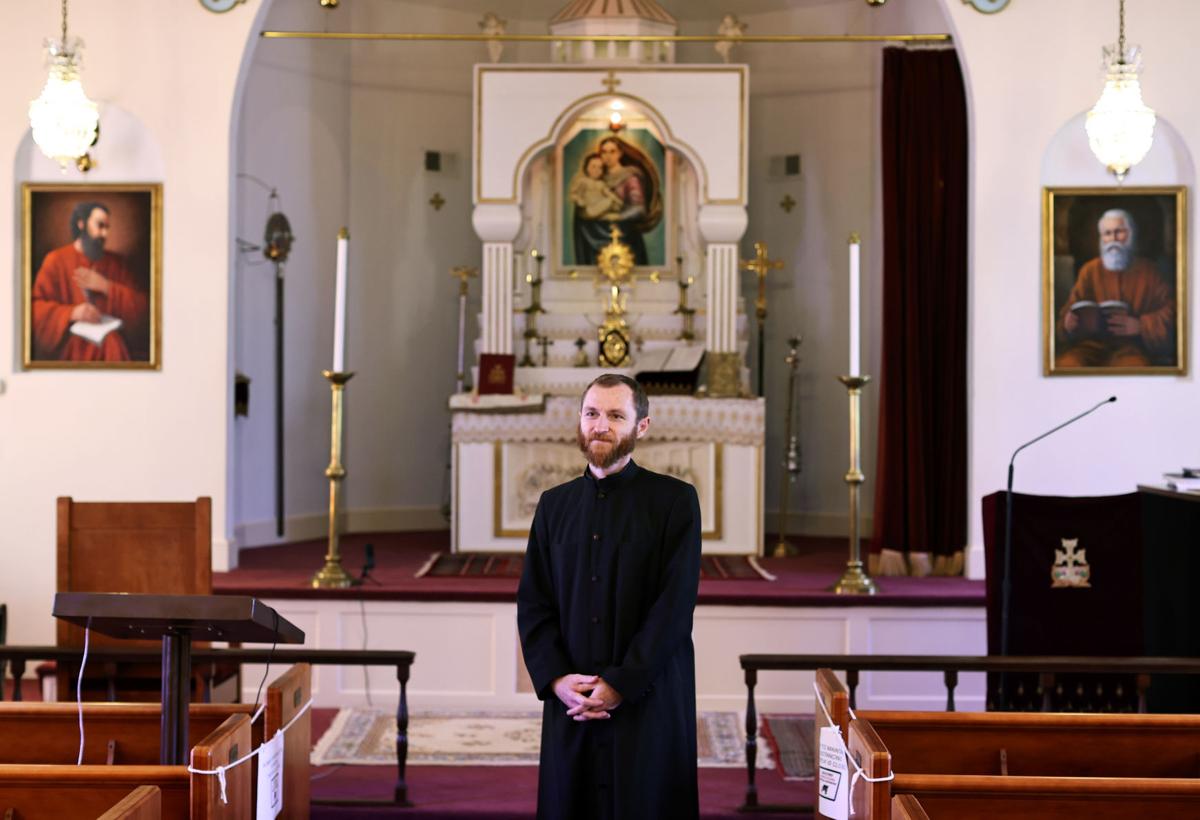 The Rev. Fr. Samuel Rith-Najarian is the pastor of St. James Armenian Apostolic Church in Richmond. President Joe Biden’s use of the term “genocide” is significant for Americans of Armenian descent.

A week ago, President Joe Biden uttered the word that no other U.S. president had been willing to say when speaking of the deportation and mass murder of more than a million Armenians over a century ago.

The word carries a precise legal definition and diplomatic entanglements, and Biden’s use of the term is largely symbolic, yet momentous for Americans of Armenian descent for whom “genocide” is “not just a word,” said Charlie Diradour, a Richmond real estate developer whose maternal grandparents escaped the massacre.

“It’s hundreds and thousands of stories that we as first- and second- and third-generation Armenians here in America and other places around the world have heard,” Diradour said. “It’s not just a word. It was an experience that we as children and grandchildren and great-grandchildren of those who actually went through it took it upon [ourselves] to make it known to the world that this happened.”

Biden made the reference in a statement on April 24, the annual Armenian Remembrance Day when the Armenian diaspora around the globe commemorate those who were lost in the purge by the Ottoman Empire that began April 24, 1915, with the deportation of Armenian intellectuals from Constantinople (modern-day Istanbul).

According to historical accounts, more than half of all Armenians in the Ottoman Empire — perhaps as many as 1.5 million — were killed between the spring of 1915 and the end of World War I in 1918. Many were driven into the Syrian desert on death marches.

On the 100th anniversary, the Armenian Apostolic Church canonized the victims of the genocide as saints.

“It’s really kind of changed the perspective of Armenians on those martyrs in the sense that it went from looking at those who died as victims ... [and] seeing them instead as victorious in a sense,” said the Rev. Fr. Samuel Rith-Najarian, pastor of Richmond’s St. James Armenian Apostolic Church. “Changing our perspective has really changed the feeling of our community. There was an attempt to exterminate Armenians and here we are singing and praying 106 years later in an Armenian church in Richmond, Virginia.”

Rith-Najarian’s great-grandmother was orphaned at age 13, her parents killed in front of her during the Ottoman campaign against the Armenians. She managed to flee to Egypt and eventually to the United States. Rith-Najarian was 12 when she died.

“So I was old enough to hear her tell the stories. In the last few years of her life, she was starting to get Alzheimer’s, and it was almost as if she was having flashbacks to that time,” he said. “I remember my cousins and myself were visiting her and she would see us running around and playing and would start crying thinking that the [Ottomans] were coming to take us and she had to protect us.”

Rith-Najarian said one of the most healing parts of Biden’s statement was when he said of the Armenians who experienced that period of horror, “We honor their story. We see that pain. We affirm that history.”

His father was about 4 or 5 when members of his family, except for his mother and aunt, were killed. The Ottomans rounded up many of the children, and Bandazian said his father was taken to a military school. He was held there for about two years before somehow his mother found him and helped him escape. At first, he remembered neither his mother nor how to speak Armenian, as his memory had been erased during his separation.

They fled first to Lebanon and then France. Bandazian’s father, at age 21, made it to the U.S., which was in the depths of the Great Depression.

And yet he called coming to America “like coming to heaven,” Bandazian recalled.

Bandazian questioned his father: How could Depression-era America have been anything close to “heaven”?

“He said, ‘Son, if you ever had to live through the oppression of the [Ottoman] government, even America in depression was like coming to heaven.’”

Bandazian’s father worked as a tailor at Thalhimer’s department store and later ran a family grocery in Hopewell. Bandazian, who is active at St. James Church and is founder of Bandazian & Co., a real estate firm, served as chairman of Virginia’s Armenian Advisory Commission.

Although other nations have used the term “genocide,” Biden’s declaration carries the weight of the U.S. government — “It’s different when America does it,” and it’s an important step toward justice, Bandazian said. He believes somehow reparations should be paid to Armenians who lost their homes and businesses.

“If there’s no confession and there’s no penance ... the crime continues,” he said.

As for why it took so long for an American president to call what happened a “genocide,” Bandazian said simply, “The truth is difficult for people to say.”

Biden’s statement is the culmination of many years of activism and lobbying by the American Armenian community. Armenians thought they were close to having other administrations make that step, but none did.

For the U.S., much of that difficulty in modern times is rooted in diplomacy and its strategic and military alliance with Turkey, which was created following World War I after the Ottoman Empire crumbled.

The modern-day Turkish government has always denied any systematic killing of Armenians — in 2017, the Turkish parliament even banned the use of the phrase “Armenian genocide” within the legislative body — and instead says conflict between Muslim Ottomans and Christian Armenians led to many casualties on both sides during the chaos of World War I.

However, many historians contend the evidence is clear the Ottomans engaged in ethnic cleansing, and the Armenians weren’t the only Ottoman minority group within the Ottoman Empire to suffer during that period — Greeks and Syriacs were others — though the Armenian losses were the most pronounced.

The word “genocide” wasn’t coined until the 1940s in response to the Holocaust, the systematic murder of millions of European Jews during World War II. Genocide was first recognized as a crime under international law in 1946 by the United Nations General Assembly.

Modern Armenia is a land-locked country — bordered on the north by Georgia, on the east by Azerbaijan, on the southeast by Artsakh, on the south by Iran and on the west by Turkey — with a population of about 3 million. It is estimated more than twice as many ethnic Armenians live outside the country. The Armenian embassy to the U.S. estimates between 500,000 and 2 million Armenians live in the United States.

Though his maternal grandmother died before he was born, Charlie Diradour has the tags from her clothes bags and the identification papers she brought with her to America.

“I’ve got all that stuff framed,” he said.

Her first three children died in the genocide. She and Diradour’s grandfather started a new family when they arrived in the U.S. and had four children.

As a member of the National Democratic Ethnic Coordinating Council, a wing of the Democratic National Committee, Diradour has lobbied elected officials for years to have the U.S. government officially recognize the genocide. He also recalls talking to his paternal grandmother’s sister — with his father translating since the great-aunt spoke little English — about her family’s experiences, including those of an uncle who survived because as he was being herded into the desert by Ottoman soldiers, a judicial circuit-rider came upon the group of prisoners and demanded they be freed.

“It might be politics at the international level,” said Diradour, “but it’s personal at the kitchen table.”

And he has shared those stories with his own children.

“If I don’t teach my children about it, then they can’t know what they came from, and to get anywhere in this world you’ve got to know where you start,” he said. “What is the experience that brought you to this place? Not only your experiences, but the experience of your grandparents, your great-grandparents. What makes you who you are?

Rev. Fr. Samuel Rith-Najarian of St. James Armenian Church is shown at the church in Richmond, Va., on Wednesday, April 28, 2021.

Rith-Najarian’s great-grandmother was orphaned at 13, her parents killed in front of her during the Ottoman campaign; the painting is “Holy Martyrs of The Armenian Genocide.”

The painting of “Holy Martyrs of The Armenian Genocide” is hung at St. James Armenian Church in Richmond, Va., on Wednesday, April 28, 2021.

The Rev. Fr. Samuel Rith-Najarian is the pastor of St. James Armenian Apostolic Church in Richmond. President Joe Biden’s use of the term “genocide” is significant for Americans of Armenian descent.