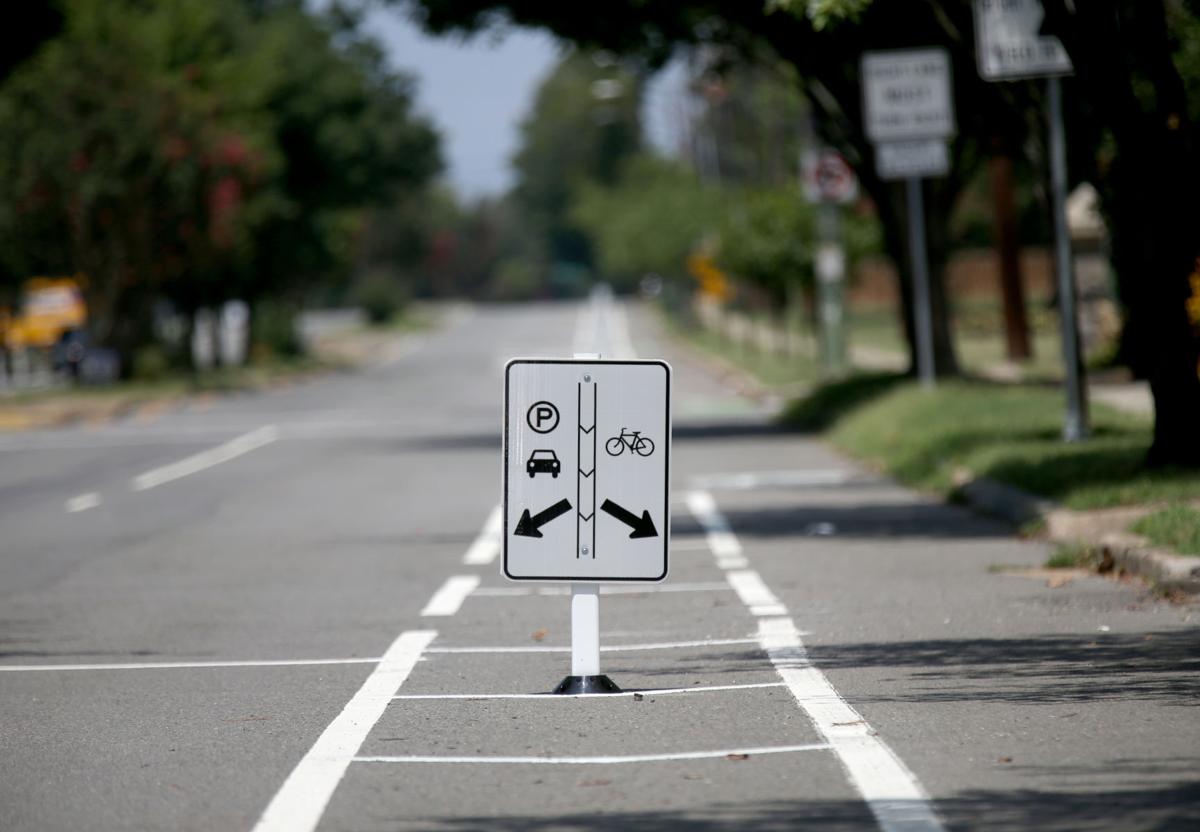 A sign on Brook Road in Richmond indicates vehicle parking and a bike lane. 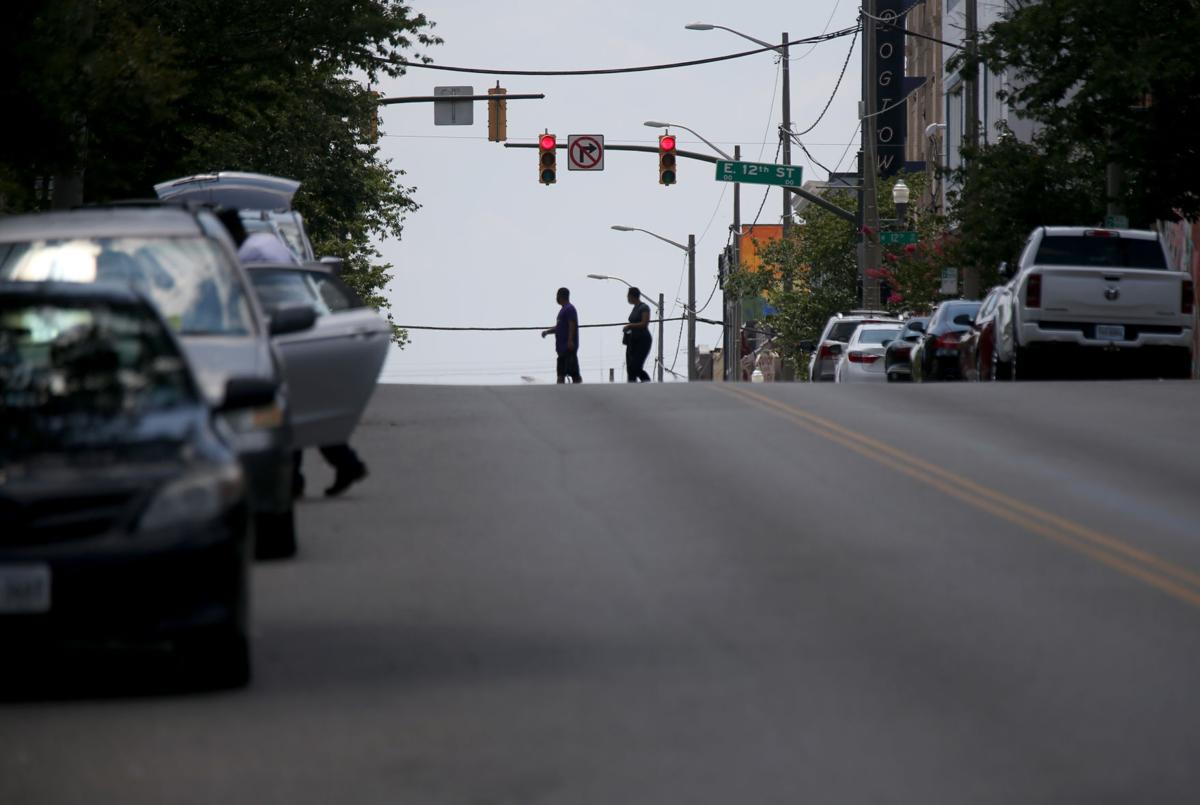 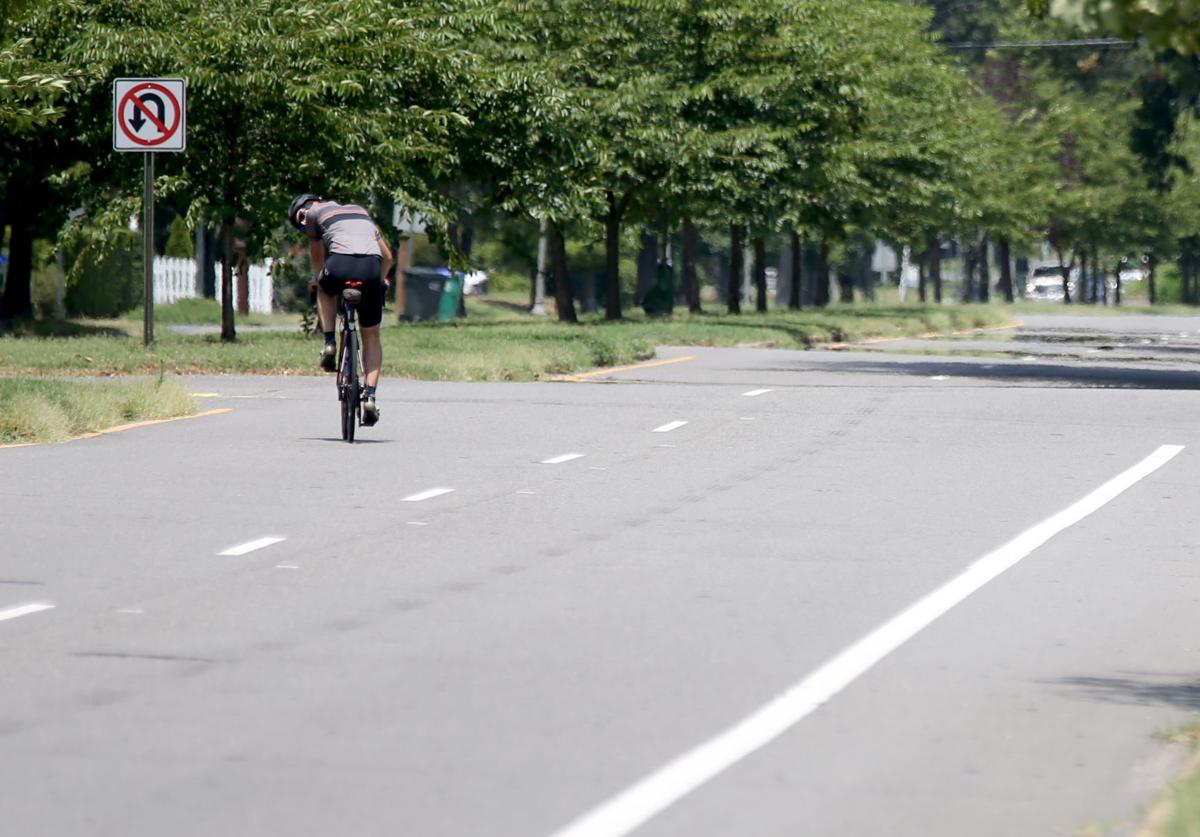 A man rides his bike along Hermitage Road in Richmond. Adding bike lanes is seen as a safety issue. 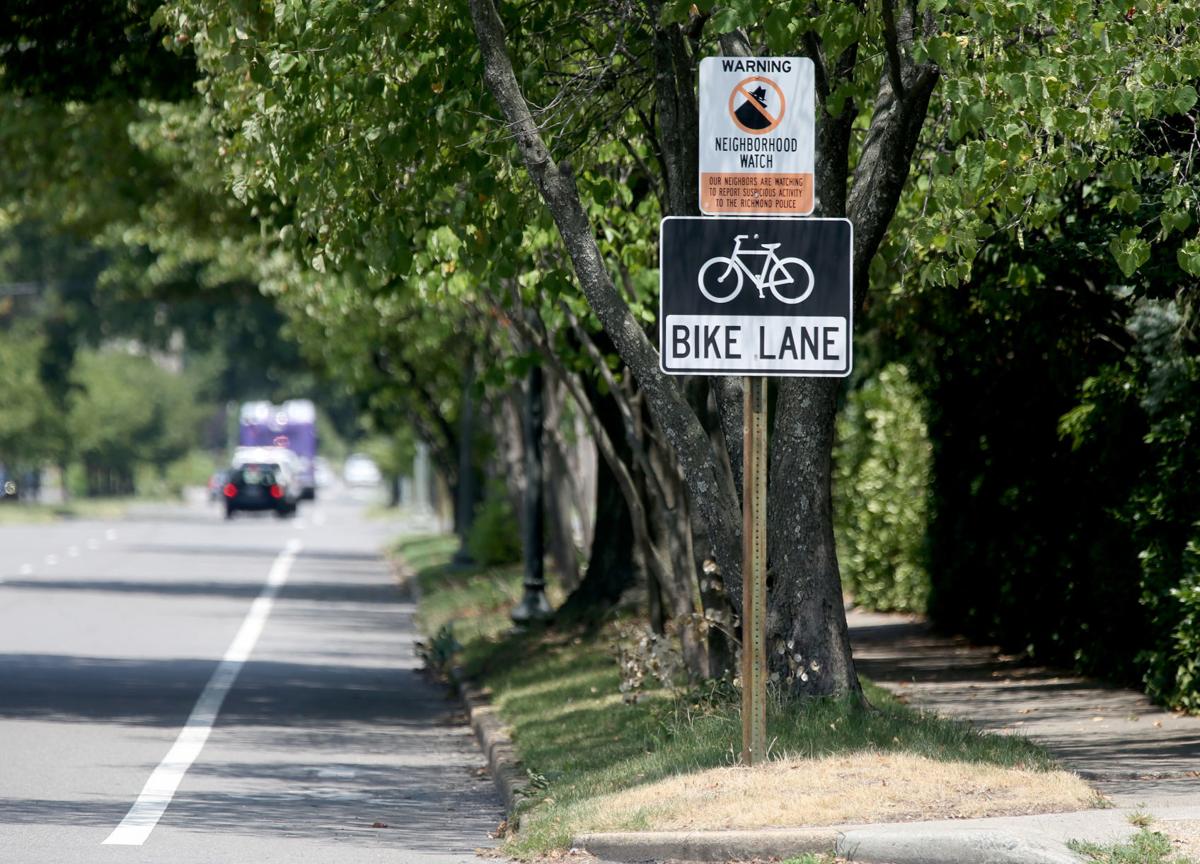 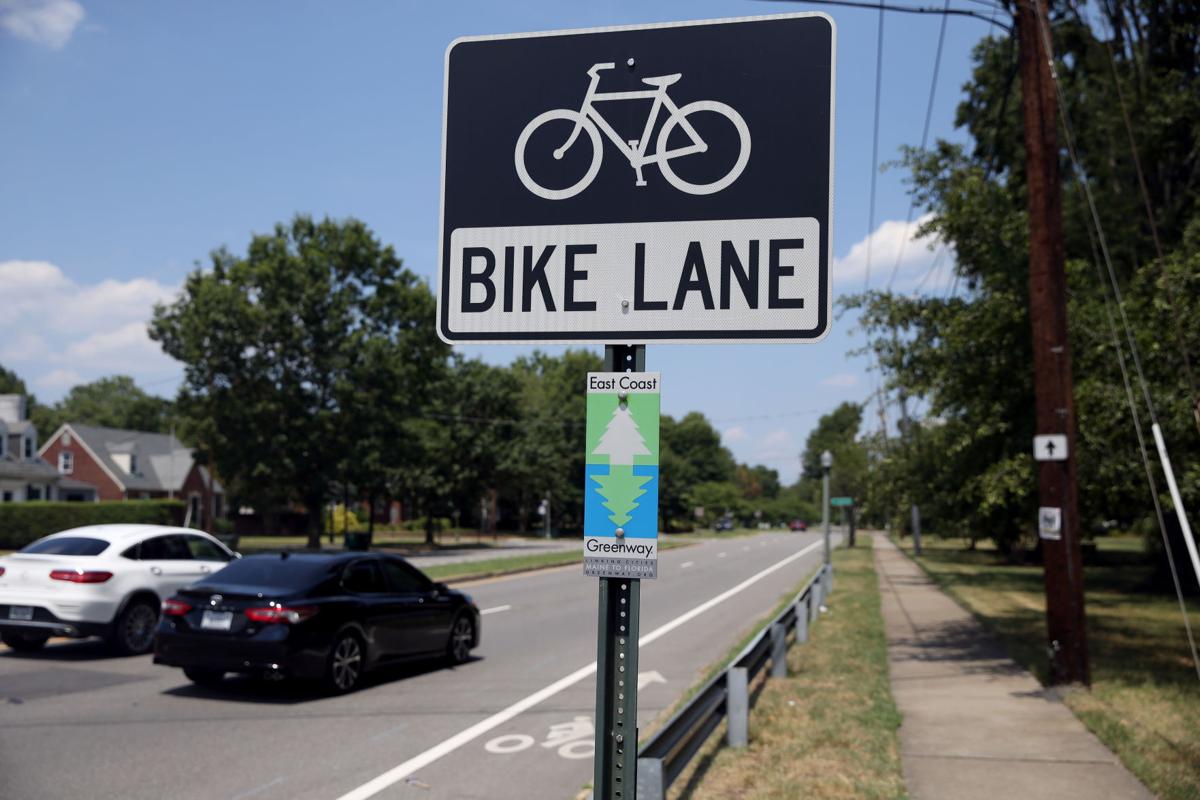 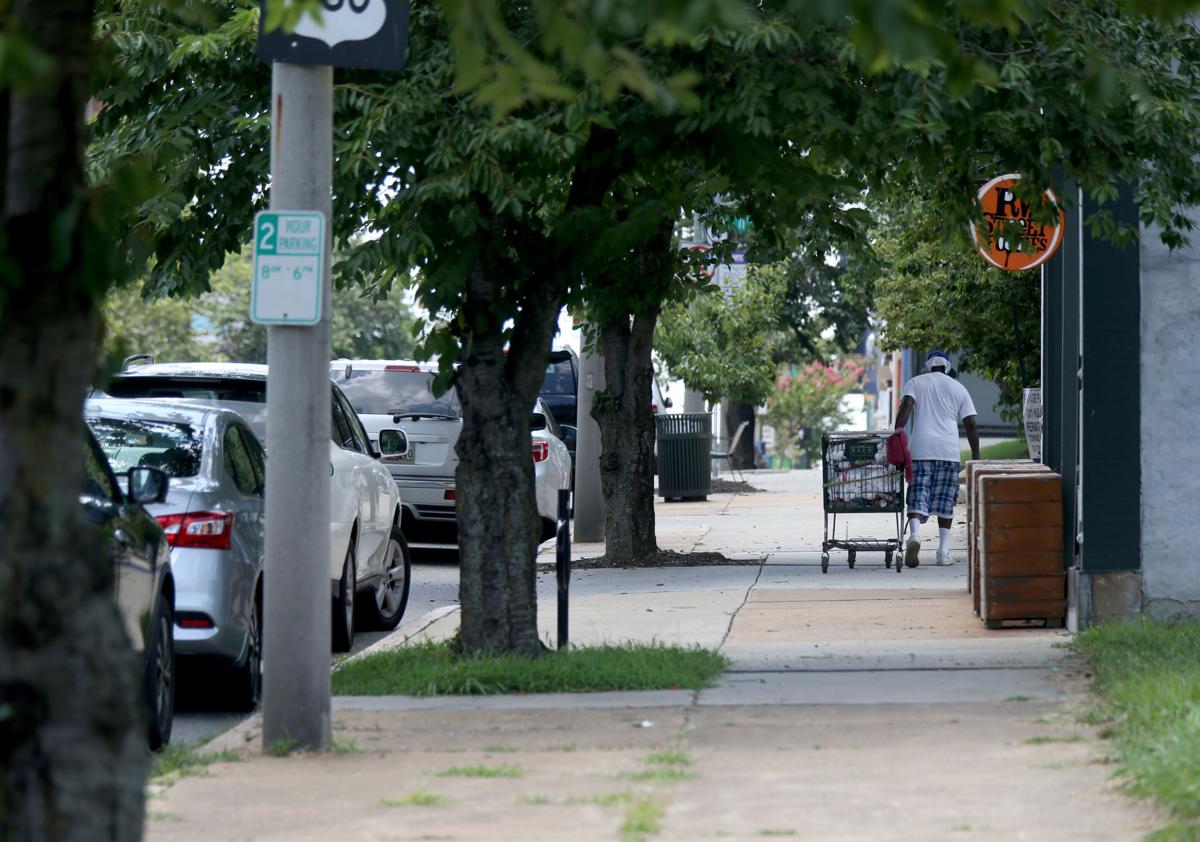 As Richmond manages the ongoing fallout of more than 60 days of protests and a pandemic that rages on, the push for bike lanes and open streets — reignited by COVID-19 and the need for social distancing — continues among transit advocates in Richmond.

The most recent call for addressing infrastructure began in May, when the Virginia Alcoholic Beverage Control Authority relaxed guidelines that would let restaurants extend their patio dining to bolster sales ravaged by closures.

On May 22, Bike Walk RVA — an advocate program of Sportsbackers focused on for improving walking and biking conditions for all — released a survey in tandem with the city of Richmond. The survey, according to Bike Walk RVA, was done at the request of the city to help identify places where people could spread out for biking or walking and where restaurants could expand outdoor dining space. The survey included two questions: which bridge residents would like to see partially closed and which street of an option of three to five within residents’ council district they would like to see partially closed. Of the more than 30 street options given, roughly five included streets with restaurants.

Two months later, where Richmond is at in the process and if the city will make it happen remains unclear.

Historically, these efforts have left Black and Latino communities and groups in low-income areas behind, prompting some advocates, residents and City Council members to call for more community input in implementing these concepts — especially in the 8th and 9th districts at the most southern part of the city.

While the Fan and Museum districts have often been the go-to in conversations among transit advocates about bike lanes, walking, public spaces and open streets concepts — specifically in Carytown — South Side residents in the 8th and 9th districts don’t have sidewalks.

“I understand the importance that bike lanes play in just the overall infrastructure and ensuring safety,” Wentz said. “I just feel like we’re in a point now where we’re so far off.”

Wentz added that Bike Walk RVA has been crucial in advocating for the district’s priorities by experiencing the inequity gaps firsthand.

Of the more than 40 bike lanes in Richmond — making up 32 miles of the city — only two currently exist in the 8th and 9th districts, according to the RVA Bikeways map. The majority of bicycle infrastructure projects completed, under construction or in the pipeline are in the wealthier parts of Richmond’s North Side — excluding low-income areas on Chamberlayne Avenue, which has a 60% Black population — and West End. The lanes south of the river are focused in Forest Hill or Manchester with the exception of one on Broad Rock Boulevard and Walmsley Boulevard, even though five of Richmond’s nine voting districts include parts of town south of the James River.

“What we’re talking about is addressing systemic racism and racist policies,” said Mike Jones, the 9th District city councilman, who added that the ease of installing bike lanes versus sidewalks is one reason he champions them. His residents could use them to walk through the district without fear of being hit or stepping into a ditch. He’s waited for sidewalk improvements for years.

“I should feel comfortable that I can walk without worrying about a white person calling the police or a police car slowing down and that’s our reality,” Jones continued.

The disparities among districts can’t be detached from the conversation, Jones said.

Within Councilwoman Stephanie Lynch’s 5th District, which straddles the river and includes Byrd Park and the Randolph area as well as Bainbridge Street and Semmes Avenue, the population is nearly 50% Black and 50% white.

Lynch said that north of the river, there’s a strong cyclist community that has the biking and pedestrian infrastructure in place to function. But roads in her district that are south of the river are dangerous, with high injury rates, she said.

Others worry that community input has been minimal and fallen on civic associations to respond to questions they don’t have answers to.

Sheri Shannon, co-founder of civic association Hull Street Action, believes this may result in the continued neglect of historical inequities within certain communities.

Sharon North, public information manager for the Department of Public Works, which is fronting the efforts, said they’ve been transparent with their projects with public meetings in neighborhoods. She adds that they “welcome involvement from the community and those who may be impacted by our work.”

In a statement, Jim Nolan, spokesman for Mayor Levar Stoney, said the administration looked forward to working with the City Council and Bike Walk RVA to engage the community on implementing open streets — especially as the city reopens.

Though there were virtual town halls in June, Shannon said she only recently heard about the survey, adding to the barriers of accessibility and who attends. Further, the survey was advertised and only available to take online, leaving residents without internet access unable to weigh in.

“A great first step is just to ask and listen. Because it is very much so possible that residents in the South Side want a bike lane. But they also want a few other things,” Shannon said, noting safety for children and public art to slow down speeding vehicles. “We’re talking about accessibility. Like, how can you even get to where you’re going if you have to walk in the middle of the road to get there?”

As the city works to balance priorities in the midst of a pandemic that disproportionately affects Black and Latino communities — in Richmond alone, they make up more than 80% of cases — and ongoing protests calling for the defunding of police, the inequities that existed long before a virus rocked the city’s core remain intact.

Some people fear that without taking into account the role race, ethnicity and location plays in urban planning — a profession in which 80% are white and 51% are male, according to Data USA — the barriers to safe streets will only widen. Mariah Williams, a Black urban planner based in Richmond, agreed.

Williams said concerns of communities of color often rely on factors that some planners may overlook, such as policing in public spaces, especially as the country battles with its record of police violence that disproportionately affects Black communities; the concept of feeling physically safe in public spaces in the aftermath of the death of Ahmaud Arbery, a Black man fatally shot while he was out jogging in Georgia; how transportation planning language is not made accessible to residents outside of the advocacy bubble; and how permanently poor road conditions, pedestrian walkways and sidewalks limit mobility.

Without acknowledging that the city’s starting with inequitable conditions, Williams added, people of color in low-income areas will struggle to benefit.

“Who’s this for? Who’s going to be most impacted? When we think of things like bike lanes and pedestrian infrastructure and all of the technical ways that we often talk about these changes, in my mind, I almost automatically think, ‘Oh, these are for white folks,’” Williams said. “Not for communities of color. Not for marginalized communities.”

Despite under-representation in transit advocacy groups, the number of Black, Latino and Asian cyclists continues to skyrocket, reports the League of American Bicyclists. Largely due to problematic road conditions in neighborhoods, the same equity report said the fatality rate for Hispanic cyclists is 23% higher than their white counterparts. For Black cyclists, that number rises to 30%.

In Richmond, the number of bicycle and pedestrian injuries, gaps in bicycle and pedestrian infrastructure, and heat levels are highest in the 8th and 9th districts, said Louise Lockett Gordon, director of Bike Walk RVA and former epidemiologist for the Virginia Department of Health. Lockett Gordon added this highlights why each street would have different options: a curbside lane; an extension to a sidewalk; repurposing a lane to walking and biking only.

Jakob Helmboldt, a pedestrian, bicycle and trails coordinator for DPW, said that quantifying money spent can be difficult unless it is a stand-alone project.

DPW didn’t answer what the cost of implementing these measures would be or how much money has been invested in bike lanes in previous years by time of publication. But Jones said anything can happen.

“It’s whether or not council and the administration is going to do something right now,” Jones said. “We’re going to be in this space for a while.”

A sign on Brook Road in Richmond indicates vehicle parking and a bike lane.

A man rides his bike along Hermitage Road in Richmond. Adding bike lanes is seen as a safety issue.