WASHINGTON (AP) — Three new senators were sworn into office Wednesday after President Joe Biden's inauguration, securing the majority for Democrats in the Senate and across a unified government to tackle the new president's agenda at a time of unprecedented national challenges.

Vice President Kamala Harris drew applause as she entered the chamber to deliver the oath of office to the new Democratic senators — Jon Ossoff, Raphael Warnock and Alex Padilla — just hours after taking her own oath at the Capitol alongside Biden. The three Democrats join a Senate narrowly split 50-50 between the parties, but giving Democrats the majority with Harris able to cast the tie-breaking vote.

“Today, America is turning over a new leaf. We are turning the page on the last four years, we're going to reunite the country, defeat COVID-19, rush economic relief to the people,” Ossoff told reporters earlier at the Capitol. “That’s what they sent us here to do.”

Ossoff, a former congressional aide and investigative journalist, and Warnock, a pastor from the late Martin Luther King Jr.'s church in Atlanta, won run-off elections in Georgia this month, defeating two Republicans. Padilla was tapped by California’s governor to finish the remainder of Harris’ term — drawing chuckles from the new vice president as she read aloud the official documentation.

Taken together, their arrival gives Democrats for the first time in a decade control of the Senate, the House and the White House, as Biden faces the unparalleled challenges of the COVID-19 crisis and its economic fallout, and the nation's painful political divisions from the deadly Jan. 6 siege of the Capitol by a mob loyal to Donald Trump.

The pandemic has claimed 400,000 American lives, and Biden is proposing a $1.9 trillion recovery package to distribute vaccines and shore up an economy struggling from the virus shutdowns. At the same time, the Senate is about to launch an impeachment trial of Trump, charged by the House of inciting the insurrection at the Capitol as rioters tried to interrupt the Electoral College tally and overturn Biden's election. The Senate will need to confirm Biden's Cabinet nominees as launches the new administration.

To “restore the soul” of the country, Biden said in his inaugural speech, requires “unity.”

“We can do great things, important things,” Biden said from the Capitol's west front. “We can make America once again a leading force of good in the world.”

Yet as Washington looks to turn the page from Trump to the Biden administration, Republican leader Mitch McConnell is not relinquishing power without a fight.

McConnell is is refusing to enter a power-sharing agreement with Senate Democrats unless they meet his demands, chiefly to preserve the Senate filibuster — the procedural tool often used by the minority party to block bills under rules that require 60 votes to advance legislation.

It's an arcane fight McConnell has inserted into what has traditionally been a more routine organizing resolution, but a power play by the outgoing Republican leader grabbing at tools that can be used to block Biden's agenda.

Progressive and liberal Democrats are eager to do away with the filibuster to more quickly advance Biden's priorities, but not all rank-and-file Senate Democrats are on board and new Senate Majority Leader Chuck Schumer has not agreed to any changes.

Instead, Schumer has proposed an organizing resolution modeled after a 2001 agreement reached between the two leaders the last time the chamber was evenly divided. It allowed equal representation on committees, shared resources for offices and other needs and made no mention of filibuster changes at all.

Biden has said he wants Congress to press ahead on all fronts, confirming his nominees and considering his legislative priorities, but also holding the former president responsible during the impeachment trial.

That’s a tall order for a Senate under normal circumstances, but even more so now in the post-Trump era, with Republicans badly split between their loyalties to the defeated president and wealthy donors who are distancing themselves from Republicans who back Trump.

Speaker Nancy Pelosi is expected to soon transmit to the Senate the House-passed article of impeachment against Trump, charged with incitement of insurrection, a step that will launch the Senate impeachment trial.

It will take unanimous consent among senators to toggle between conducting votes on legislative business and serving as jurors in the impeachment trial. The House last week impeached Trump for having sent the mob to the Capitol to “fight like hell” during the tally of Electoral College votes to overturn Biden’s election.

In his own final acts as majority leader, McConnell made a break with Trump, blaming the defeated president for having “provoked” the mob. But he also said Biden’s election was not a “referendum” on the new president’s agenda but a mixed result, even as he lost control of the Senate.

The Senate worked through the night and into midday Saturday to pass Democrats' $1.9 trillion COVID-19 relief bill, which will now go back to the House to approve the Senate's tweaks.

Democrats' sweeping bill could change how we vote

The stakes are monumental, with potential to shape election outcomes for years to come. It also tests how hard President Joe Biden and his party are willing to fight for their priorities.

Highlights of the $1.9T COVID bill that passed the Senate

Direct payments of up to $1,400 for most Americans. Aid to schools and businesses. Here are highlights of the $1.9 trillion coronavirus relief bill that's nearing final passage.

The Senate voted Monday to confirm Miguel Cardona as education secretary, clearing his way to lead President Joe Biden’s effort to reopen the nation’s schools amid the coronavirus pandemic.

Neera Tanden's withdrawal over controversial tweets marks the first high-profile defeat of one of Biden's nominees. Eleven of 23 Cabinet nominees requiring Senate approval have been confirmed.

ORLANDO, Fla. (AP) — Taking the stage for the first time since leaving office, former President Donald Trump called for GOP unity, even as he …

PORTLAND, Ore. (AP) — Jean Andrade, an 88-year-old who lives alone, has been waiting for her COVID-19 vaccine since she became eligible under … 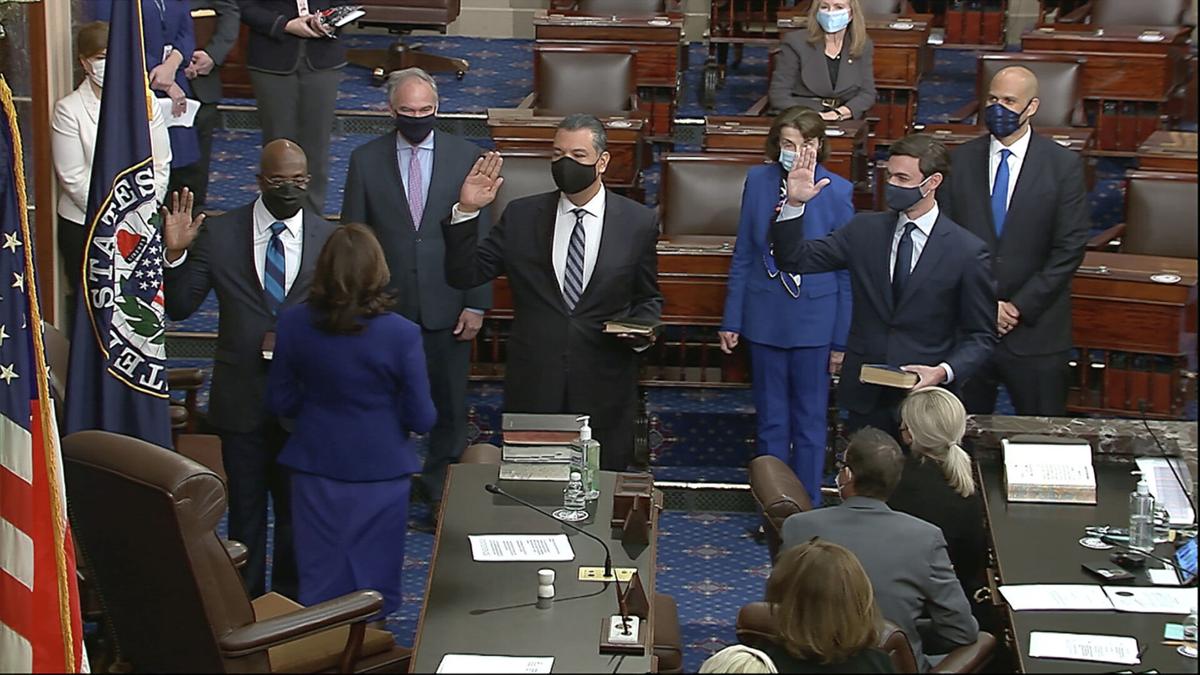 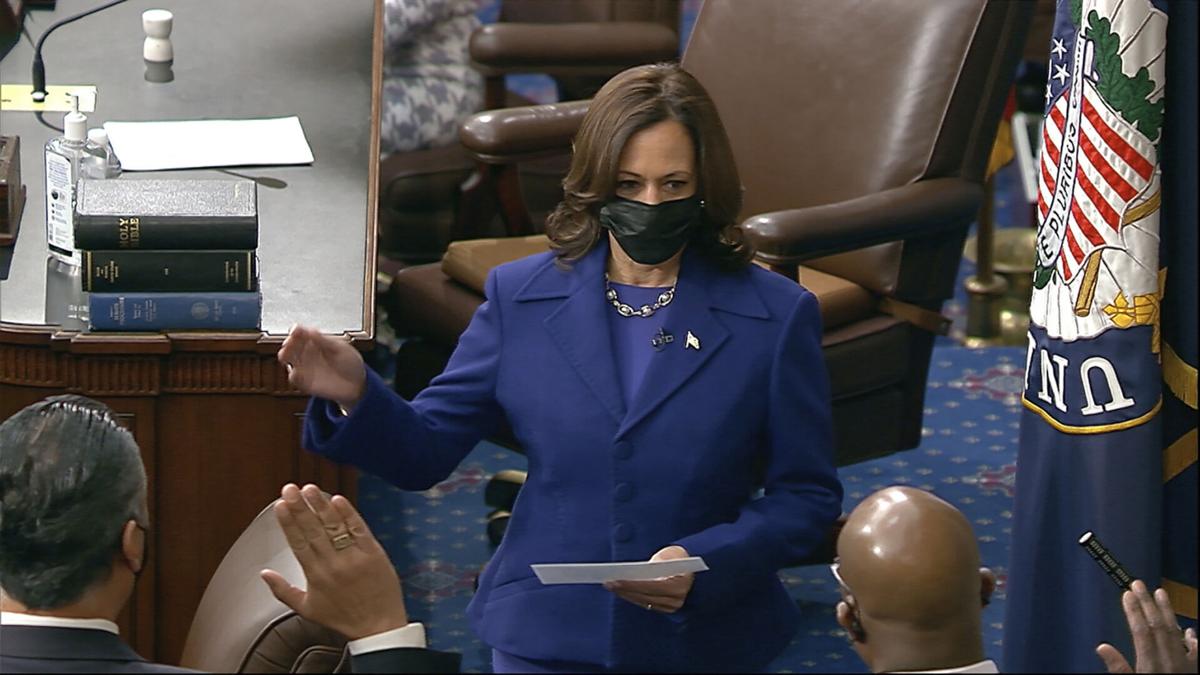