Williams: 'Democracy is always up for grabs.' Will January 6 become the new July 4?
0 Comments
Share this
1 of 2

Violent insurrectionists loyal to then-President Donald Trump climbed the west wall of the U.S. Capitol in Washington on Jan. 6, 2021. 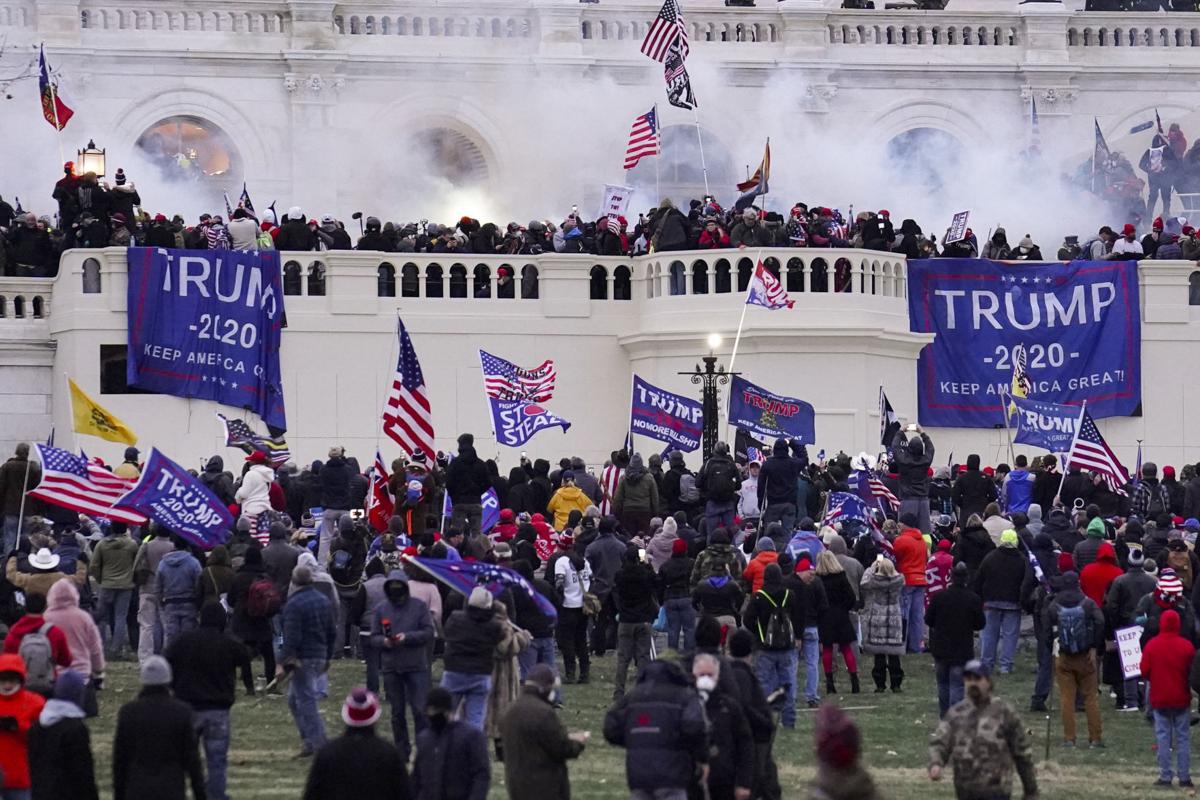 In hindsight, Virginia was a testing ground and a grim portent of the Jan. 6 insurrection.

On the Martin Luther King Jr. holiday in January 2020, theologian Corey D.B. Walker, then a visiting professor at the University of Richmond, was among a group holding a prayer vigil as thousands of firearm-toting folks occupied downtown Richmond during a gun rights rally.

Walker sees a through line from the 2017 white supremacist rally in Charlottesville to the Second Amendment gathering in Richmond to the U.S. Capitol riot. The Richmond gun rally turned out to be a peaceful event, though law enforcement had feared the worst — including the storming of the Virginia Capitol.

“That didn’t portend anything good for what would happen January 6, 2021,” said Walker, now the Wake Forest (University) Professor of the Humanities, in an interview on Tuesday. Whether democracy survives that trauma is “an open question we have to wrestle with.

“Democracy is a practice, it is not a declaration. It is not the finished product. It is an ongoing practice,” he said. And if we don’t cultivate it, we could lose the American Experiment.

That loss would not be mourned by a chunk of the nation and one political party. Republican congresspersons — some suspected of being collaborators — are engaged in the cover-up of a crime. And yet, the lingering horrors of a year ago Thursday appear largely unshared — at least to the extent they’d foster unity, vigilance and a sense of urgency.

“I’m concerned that we don’t understand the full depth and range of the problems and challenges we face as a society,” Walker said. “I think we see this as merely cosmetic and not structural and foundational. But you don’t get a coup attempt unless there’s something deeply, deeply wrong in the nation.”

Anyone who has been paying attention knows America is beset with more than a potentially lethal virus as it battles a crisis of identity and values and wages war with itself.

What’s different now, Walker said, is that one political party is openly authoritarian and courts violent extremists to attain or maintain power. “That’s the danger. That is really what we’re facing in this moment.”

We must demonstrate the capacity of democracy to work. But government has become populated by too many people who hate government, oddly, for what it can do for the masses. Our sense of collective possibility has been eroded by the politics of the individual, said Walker, former dean for the Samuel DeWitt Proctor School of Theology at Virginia Union University.

The truth is, our nation has seldom been all-in on democracy. Black men were not granted the right to vote until 1870; women of all races, not until 1920. It took the Voting Rights Act of 1965 to ensure ballot access for all.

The act was arrogantly gutted by a Supreme Court whose Chief Justice, John Roberts, blithely declared victory over racism. Since then, the Republican Party has chipped away at the ballot access of anyone it deems unsupportive. And since the defeat of Donald Trump, this tactic has evolved into the gaming of the election system by giving Republican-controlled legislatures undue power over election results.

“They hate our freedom” was the mantra back in 2001, when this nation was attacked from without. Our response went against what this nation professes to believe in as it expanded its surveillance of innocent Americans, endorsed torture and deployed falsehoods to justify an invasion of Iraq. On that front, the terrorists won.

Today, internal forces have distorted the meaning of freedom, patriotism and verifiable truth. Too many citizens have embraced the cause of sedition, stoked by Trump’s lie of a stolen election. For them and the lawmakers who would further their cause, that insurrection was not an end, but a beginning. They are intent on turning January 6 into the new Fourth of July. They must be stopped.

If you’re unwilling to safeguard the voting rights of your fellow citizens, toss out the fools in Congress aiding and abetting a coup, and fight to preserve our democracy, the insurrectionists win.

WASHINGTON (AP) — Voting legislation that Democrats and civil rights leaders say is vital to protecting democracy collapsed when two senators refused to join their own party in changing Senate rules to overcome a Republican filibuster after a raw, emotional debate.

WASHINGTON (AP) — Voting legislation that Democrats and civil rights leaders say is vital to protecting democracy collapsed late Wednesday when two senators refused to join their own party in changing Senate rules to overcome a Republican filibuster after a raw, emotional debate.

Youngkin calls on lawmakers to enact 'vision of change'

RICHMOND, Va. (AP) — Gov. Glenn Youngkin asked the divided Virginia General Assembly on Monday to work with him to enact his “sweeping vision of change” for the state by rolling back taxes, expanding school choice and boosting funding for law enforcement.

Biden backers 'not seeing the results' a year into his term

NEW YORK (AP) — Just over a year ago, millions of energized young people, women, voters of color and independents joined forces to send Joe Biden to the White House. But 12 months into his presidency, many describe a coalition in crisis.

Some in GOP begin testing party's lockstep loyalty to Trump

WASHINGTON (AP) — Former President Donald Trump stepped up his election-year effort to dominate the Republican Party, holding a rally in Arizona on Saturday in which he castigated anyone who dares to question his lie that the 2020 presidential election was stolen, including the state’s GOP governor, Doug Ducey.

The seditious conspiracy case against members and associates of the far-right Oath Keepers militia group marks the boldest attempt so far by the government to prosecute those who attacked the U.S. Capitol, but invoking the rarely used charge carries considerable risks.

NEW YORK (AP) — For the first half of one of his rare news conferences as president, Joe Biden stuck to an organized plan, calling on reporters from a list in a binder.

For Oath Keepers and founder, Jan. 6 was weeks in the making

WILMINGTON, Del. (AP) — Two days after the election on Nov. 3, 2020, the Oath Keepers were already convinced that victory had been stolen from President Donald Trump and members of the far-right militia group were making plans to march on the U.S. Capitol.

WASHINGTON (AP) — Democrats were picking up the pieces Thursday following the collapse of their top-priority voting rights legislation, with some shifting their focus to a narrower bipartisan effort to repair laws Donald Trump exploited in his bid to overturn the 2020 election.

Violent insurrectionists loyal to then-President Donald Trump climbed the west wall of the U.S. Capitol in Washington on Jan. 6, 2021.