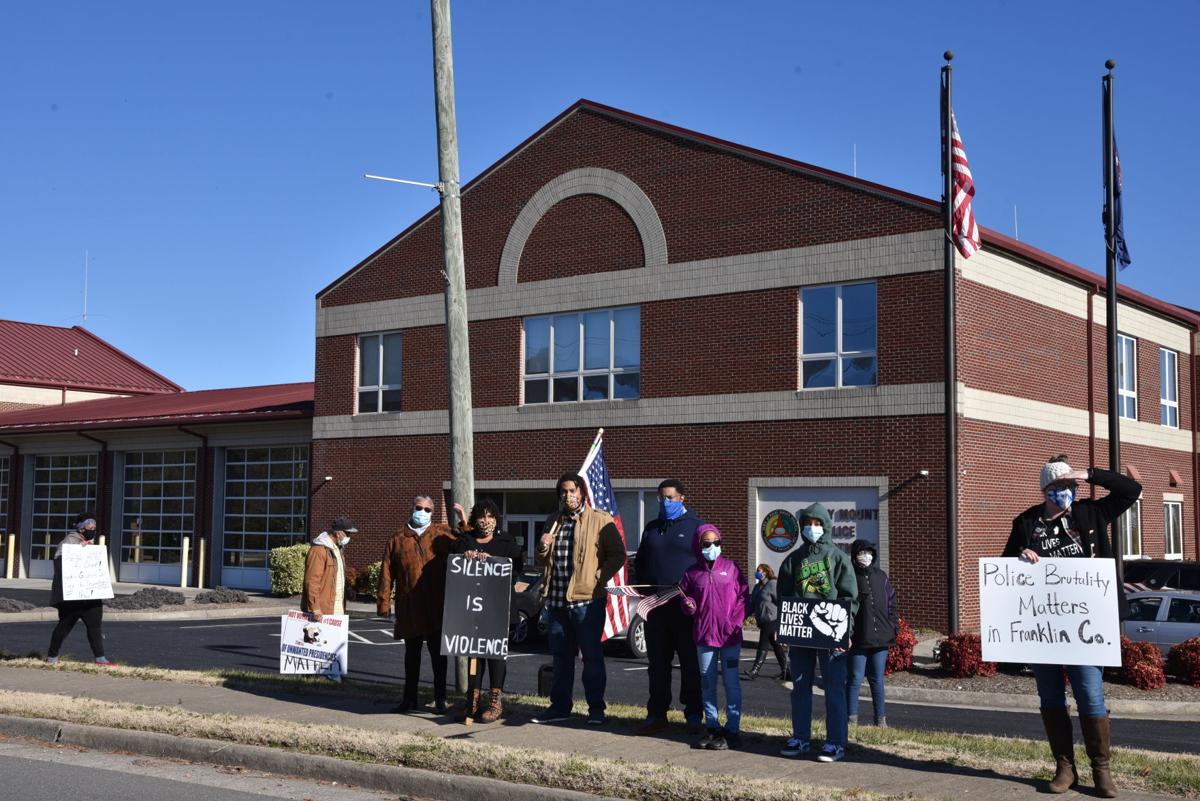 A Black Lives Matter protest was held on Sunday afternoon in front of the Rocky Mount Police Department.

In this combination of photos, demonstrators, left, protest June 4, 2020, in front of the U.S. Capitol in Washington, over the death of George Floyd and on Jan. 6, 2021, supporters of President Donald Trump rally at same location. (AP Photos)

In this combination of photos, on June 3, 2020, demonstrators, left, protest the death of George Floyd at the U.S. Capitol in Washington and Trump supporters try to break through a police barrier Jan. 6, 2021, at the same location. (AP Photos)

Those who wondered what the summer of Black Lives Matter protests was about can find their answer in two Southwestern Virginia police officers who found justification in insurrection.

Rocky Mount Police Sgt. T.J. Robertson and Officer Jacob Fracker were inside the U.S. Capitol during its Jan. 6 assault by a seditious mob, according to The Roanoke Times. They posted a selfie of themselves on social media.

“CNN and the Left are just mad because we actually attacked the government who is the problem and not some random small business … The right IN ONE DAY took the f——— U.S. Capitol. Keep poking us,” Robertson wrote in a Facebook post.

Robertson told The Times that he and Fracker broke no laws. “We were escorted in by the Capitol Police, shown around, and told, ‘As long as you stay here, you’re fine,’” he said.

Anyone who still has to ask why so many Black people don’t trust law enforcement should have their answer. Police, as it turns out, can’t even trust their own. Two U.S. Capitol Police officers have been suspended and others are under investigation for their actions during a Capitol riot that left five people dead, including a Capitol police officer who was beaten with a fire extinguisher.

Police departments nationwide are investigating whether members of their ranks participated in this attempt to subvert the will of the voters in service of an unhinged president who values himself more than the U.S. constitution or its citizens. Police spokespersons from the city of Richmond and the counties of Chesterfield, Hanover and Henrico say their departments are unaware of any personnel who were at the Capitol during the riot.

The Rocky Mount Police Department issued a statement Sunday saying it is aware two of its off-duty officers were present at an “event” in Washington on Wednesday. The department notified federal authorities and placed the officers on administrative leave “pending review.”

“The Town of Rocky Mount fully supports all lawful expressions of freedom of speech and assembly by its employees but does not condone the unlawful acts that occurred that day,” the statement read.

“Event,” in this context, belongs in the euphemism hall of fame. And what, exactly, is left to review?

Rocky Mount Town Manager C. James Ervin, in an email Monday, replied that the Virginia Code contains the Policeman’s Bill of Rights that outlines specific steps and processes. “The Town has to adhere to that, providing notice, and opportunity to respond and due process.”

Insurrection by mob is not a guaranteed First Amendment right. And while we’re at it, we need to re-examine our Second Amendment. Heavily armed extremists feel emboldened; law enforcement, perhaps outgunned.

State capitols, including Richmond, are on high alert. Seditionists are talking civil war at a time when government appears to be at war with itself.

Questions linger about the lack of preparation and slow response to the siege by law enforcement. The chief of the U.S. Capitol Police resigned. And The Washington Post reported Tuesday that internal documents of the FBI office in Virginia warned of extremist violence and “war.” And of course, this debacle was stoked by the lies of President Donald Trump and his feckless GOP allies.

Now is no time for police to circle the wagons or for folks to mindlessly chant, “Back the Blue.” Police with integrity, in light of what transpired Wednesday, need to realize that change is necessary not only to protect Black bodies, but their own.

It was hard to miss the disconnect between officers valiantly struggling to keep lawmakers safe and those who chose to take a selfie, don a MAGA hat, act like a tour guide and otherwise indulge the mob. In a harrowing video, a fleeing Capitol Police officer, Eugene Goodman, was pursued up a stairway by insurrectionists, luring them away from the Senate chamber. In heartbreaking footage, we saw an officer being crushed in a door.

The Richmond area is no stranger to the police officers whose sympathies and affiliations are antithetical to law enforcement.

In April 2019, the Division of Capitol Police fired Sgt. Robert A. Stamm after he was accused of having “an affinity” for white supremacy symbols. That same month, the Chesterfield County Police Department fired officer Daniel Morley, a school resource officer, after confirming his affiliation with Identity Evropa, a white supremacist organization.

For some people, that trust has been uprooted. For others, it never was nourished.

In the face of a national insurrection, we shouldn’t have to wonder whose side police officers are on. To the extent their allegiance is divided, we’re all in danger.

Two Republican senators say President Trump should resign, as support for impeachment is gaining momentum in his final days in office after the deadly riot at the Capitol by a violent mob of Trump supporters.

Acting Homeland Security Secretary Chad Wolf is stepping down from his post, days after criticizing President Donald Trump over the riot at the U.S. Capitol.

Several bridges that connect Virginia to Washington will be closed 48 hours for next week's presidential inauguration.

Also: Trump shows no remorse for the Capitol riot, blaming Democrats for  "tremendous anger" in America. He could become the only president in history to be twice impeached. Plus, get a preview of what's coming next.

Donald Trump was impeached for a second time Wednesday, just a week after he encouraged loyalists to “fight like hell” against election results and then a mob of supporters stormed the U.S. Capitol. The House voted 232-197, with 10 Republicans joining Democrats to rebuke the president.

Protesters swarm state capitols across US; some evacuated

Protesters backing President Donald Trump massed outside statehouses from Georgia to New Mexico on Wednesday. Plus, reaction from around the country to the U.S. Capitol attack.

Donald Trump has been kicked off of most mainstream social media platforms, and now Google, Apple and Amazon have booted the far-right-friendly Parler.

A Black Lives Matter protest was held on Sunday afternoon in front of the Rocky Mount Police Department.

In this combination of photos, demonstrators, left, protest June 4, 2020, in front of the U.S. Capitol in Washington, over the death of George Floyd and on Jan. 6, 2021, supporters of President Donald Trump rally at same location. (AP Photos)

In this combination of photos, on June 3, 2020, demonstrators, left, protest the death of George Floyd at the U.S. Capitol in Washington and Trump supporters try to break through a police barrier Jan. 6, 2021, at the same location. (AP Photos)