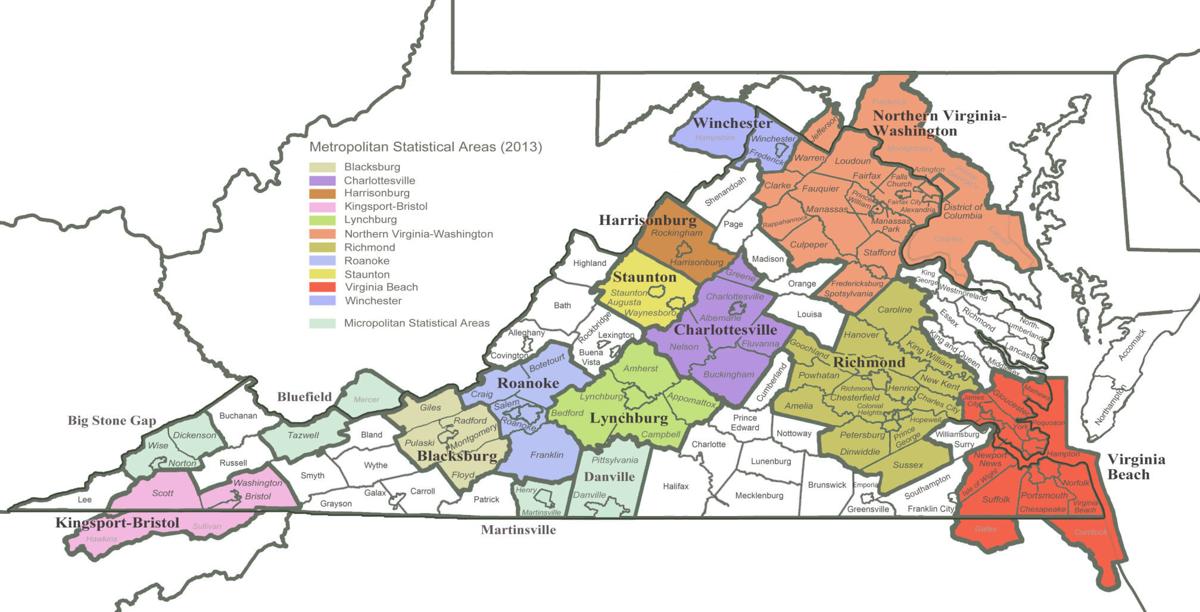 While statewide growth begins to slow, Chesterfield, Henrico and Hanover counties and the city of Richmond will continue to grow, exemplifying an expanding urban-rural divide, according to new population projections for 2020 to 2040 from the University of Virginia’s Weldon Cooper Center for Public Service.

Virginia is still growing, but the pace has decreased — the population growth rate is projected at 8% for 2010 to 2020, compared with 13% in the previous decade, and is expected to hold steady in the next decade. Shonel Sen, the demographer who developed the projections, said they are a function of three major trends: birth rates, death rates and migration.

In Virginia, birth rates are declining, and death rates are increasing as the state’s sizable baby boomer population begins to age out, Sen said. In addition, fewer people are moving to the state. Sen said declining birth rates often have sociological explanations — nationally, fertility is being delayed as women are giving birth at later ages, and family size is decreasing. Migration, meanwhile, is the least steady of the factors, and trends change often.

The combination of those three factors has led Sen to project that more than 60 localities in Virginia have experienced population decline this decade.

Projections for the Richmond metropolitan area, meanwhile, are bullish. The metro statistical area — defined by the federal Office of Management and Budget as a group of 17 counties and cities bordered by Caroline County to the north, Sussex County to the south, Goochland County to the west and New Kent County to the east — is expected to have more than 1.5 million people in 2020.

“The Richmond metropolitan area is going to play a significant role in the future,” Sen said, noting that three of its localities are already among the state’s 10 most populous. Chesterfield ranks fifth, Henrico is sixth and Richmond is 10th.

For an area to experience population density, Sen said it has to attract and retain residents through providing opportunity.

While the Richmond metro area and other urban centers, including those in Hampton Roads and Northern Virginia, experience growth, some rural areas are witnessing population decline.

According to the 2020 projections, 71% of Virginians reside in one of the state’s three largest metropolitan areas — Northern Virginia, Hampton Roads or Richmond — with 17% in other metro areas and only 12% living in non-metro areas.

Virginia does not require voters to register by party, but in 2018, Sen. Tim Kaine, D-Va., carried all 10 of the state’s most populous localities, as did Democrat Ralph Northam in his 2017 run for governor. Democrat Hillary Clinton carried seven of the 10 in the 2016 presidential election; Republican Donald Trump carried Chesterfield and the cities of Chesapeake and Virginia Beach.

The aging of Virginia’s population will also present political and economic ramifications. By 2020, 1 in 7 Virginians will be over the age of 65, with the senior citizen population projected to increase from 12% in 2010 to 18% in 2030 due to declining birth rates and the prominence of the baby boomer generation.

With the share of youth and working-age populations decreasing, the state will need to make adequate preparations to accommodate an increasingly geriatric population.

“You may not have as large a cohort within the working-age population,” Sen said. “On the flip side, with the aging population, you need to be prepared for different services for the elderly — disability care, housing needs. So all of these will factor into our decision-making and planning in the future, knowing that the population will be aging for sure.”

Qian Cai, the director of the center’s Demographics Research Group, said the researchers are looking forward to comparing their projections to the results of the 2020 census, which will be conducted next April. The census will provide a “head count” for a static moment in time that the researchers can then use to gauge their work and have more data for further projecting, Sen said.