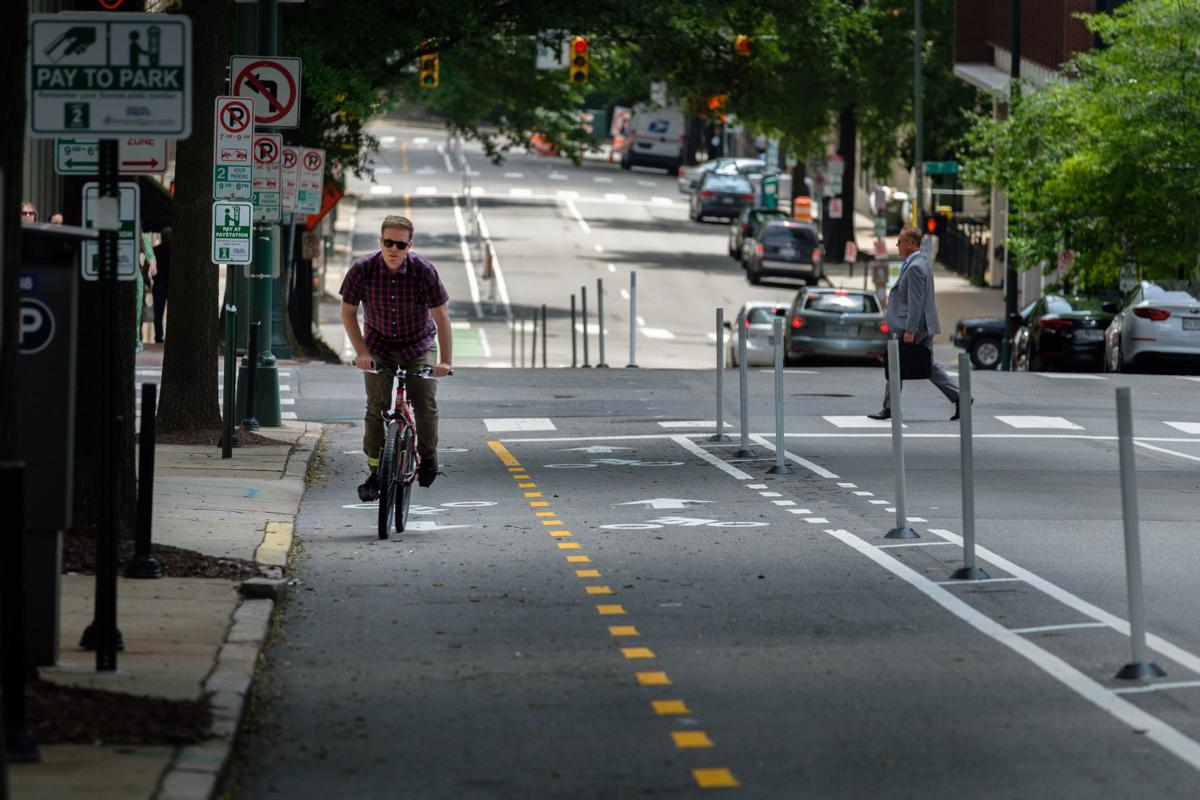 Stuart Squier rides in the two-way bike lane on Franklin Street, traveling from downtown to his home in Jackson Ward. The lane to the right of the white poles is for parking after rush hour, but few drivers have been using it. 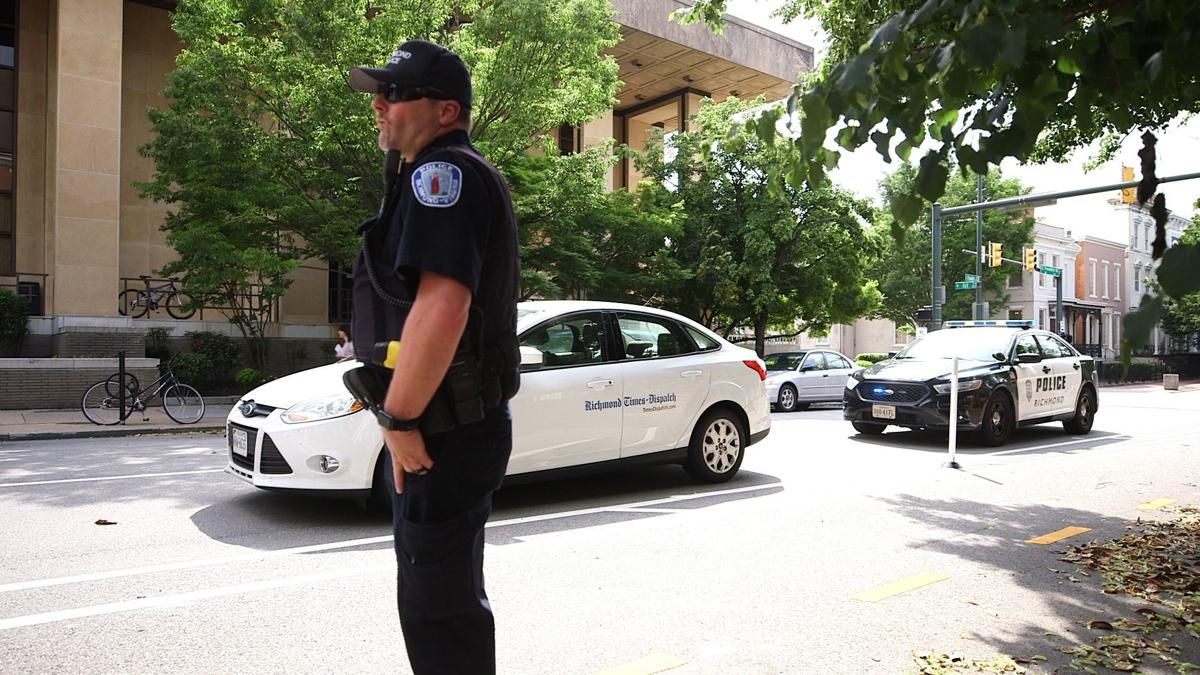 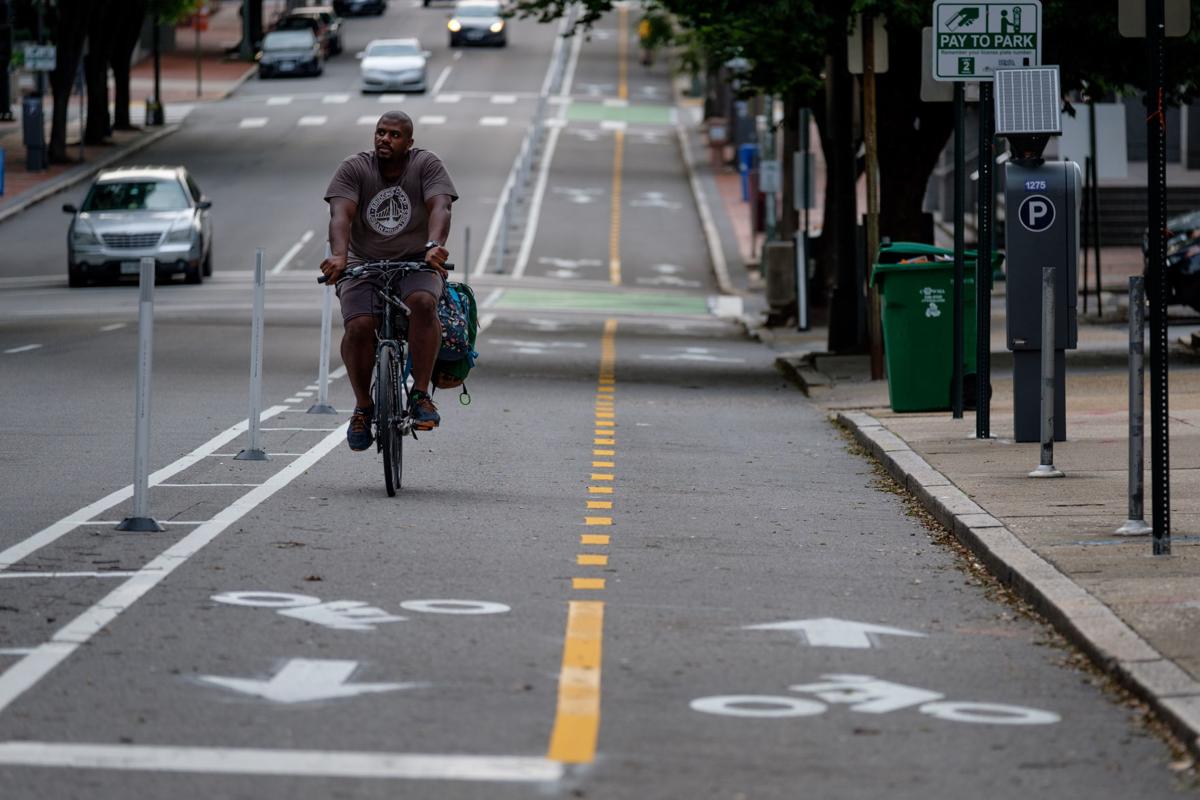 Bernard Butler rides in the new two-way bike lane on West Franklin Street from Carytown to his home in Church Hill with his daughter, Sutton, who is in a child seat behind him. 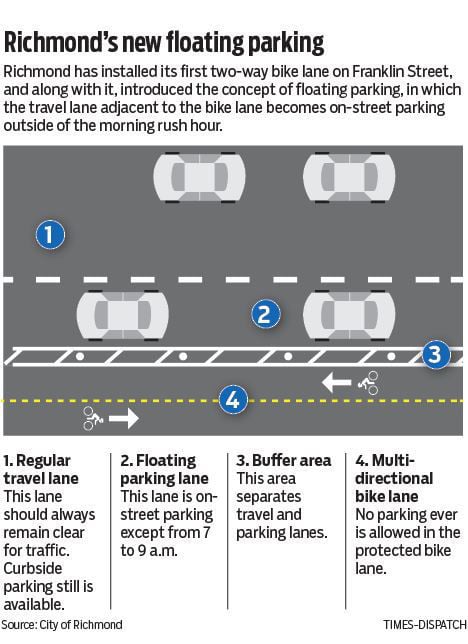 Richmond drivers are getting their first taste of what city planners are calling floating parking and, well, there’s definitely going to be a learning curve.

“I heard people slamming on their brakes, I heard people yell at my car, five police officers stopped — it’s been awful,” said Helen Borges, who is among the first people to attempt to use the new protocol.

Here’s the deal: On Friday, the city officially opened its first two-way bike lane, on Franklin Street between Monroe Park and the state Capitol. To preserve on-street parking on both sides of the street, the city is allowing drivers to park in the left lane of traffic after the morning rush hour, reducing the flow of vehicles to one lane.

And that’s it. Floating parking. From 7 to 9 a.m., the left lane is a travel lane. At all other times, you can park there.

But, at least for now, there is no clear signage explaining how it’s all supposed to work. The parking signs on Franklin are the same as everywhere else in the city. And they’re still on the edge of the sidewalk, separated from the floating parking lane by the bike lane.

Department of Public Works spokeswoman Sharon North said the city is working on it.

“It’s substantially complete,” she said. “Nearly everything is completed. We do need to put down some additional pavement markings. And there is going to be some additional signage to try to explain the parking process.

“We have to take into consideration that this is a cultural and educational change. This is something different from the city.”

On Monday afternoon, no one was using the lane for parking, and when a Richmond Times-Dispatch reporter and photographer parked a vehicle there for an hour, two police officers stopped and at least a half-dozen people honked or hurled expletives that suggested they did not think it was an appropriate place to leave a vehicle.

The police officers, who arrived separately at different points during the hour, initially said the car needed to be moved and expressed confusion and doubt when informed about the new traffic pattern.

Borges, who works at a law firm on Franklin Street, said she decided not to park there again on Monday because she didn’t want to deal with the hassle.

“I was trying to get other people on board, but they’re too scared of their car getting hit,” she said.

While people have been reluctant to park in the floating lane, numerous cars have been spotted in the bike lane itself.

A police spokesman, James Mercante, said officers have now been briefed, as has the city’s parking enforcement vendor, Standard Parking, and that they would issue tickets accordingly.

Indeed, earlier in the day a Standard Parking employee approached a truck idling in the new bike lane.

“You can’t park here,” the employee said. “See the street? Those are the new parking spaces. Isn’t that crazy?”

Cyclists said that, aside from the times they’ve encountered vehicles in the bike lane, the additional infrastructure has been a major improvement.

“It’s frustrating, because it’s obvious to me you shouldn’t park there,” said Stuart Squier, who said he encountered a line of cars parked in the bike lane next to the Hotel John Marshall on Saturday evening. “There’s the posts, the double line. But it’s a new facility and people just aren’t used to it yet.”

Richmond's newest bike infrastructure project is now mostly complete, certainly enough to use it in time for National Bike To Work Day on Frid…

Williams: Floating parking? The Pulse? Richmond motorists will have to navigate a learning curve

Stuart Squier rides in the two-way bike lane on Franklin Street, traveling from downtown to his home in Jackson Ward. The lane to the right of the white poles is for parking after rush hour, but few drivers have been using it.

Bernard Butler rides in the new two-way bike lane on West Franklin Street from Carytown to his home in Church Hill with his daughter, Sutton, who is in a child seat behind him.