Kaine says he's eager to take on Stewart. GOP members of Congress are silent.
0 Comments
Share this
1 of 3 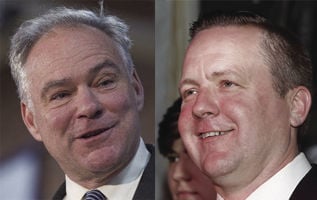 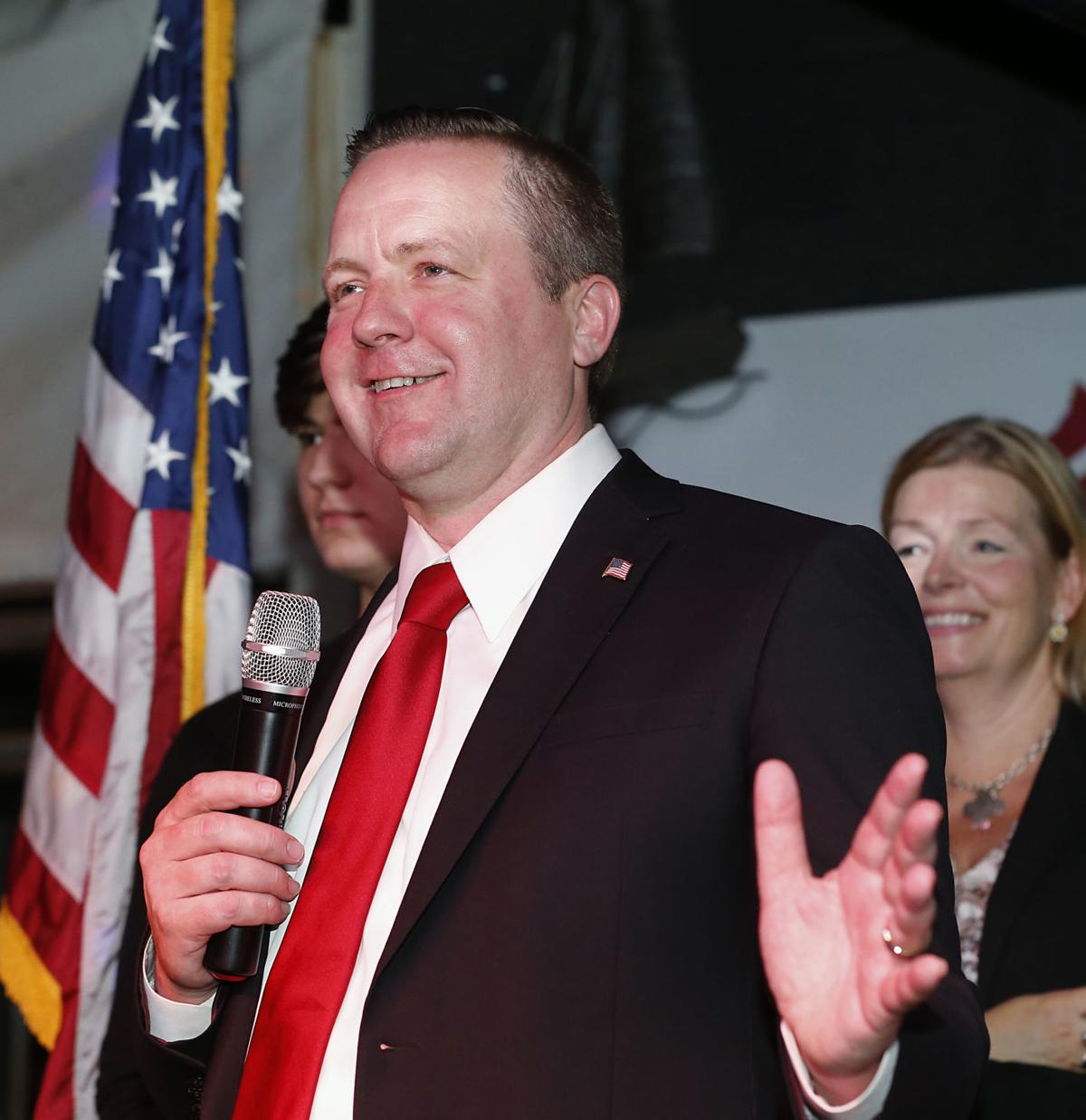 Corey Stewart, chairman of the Prince William Board of County Supervisors, spoke to supporters Tuesday during his primary victory party at The Electric Palm Restaurant in Woodbridge. 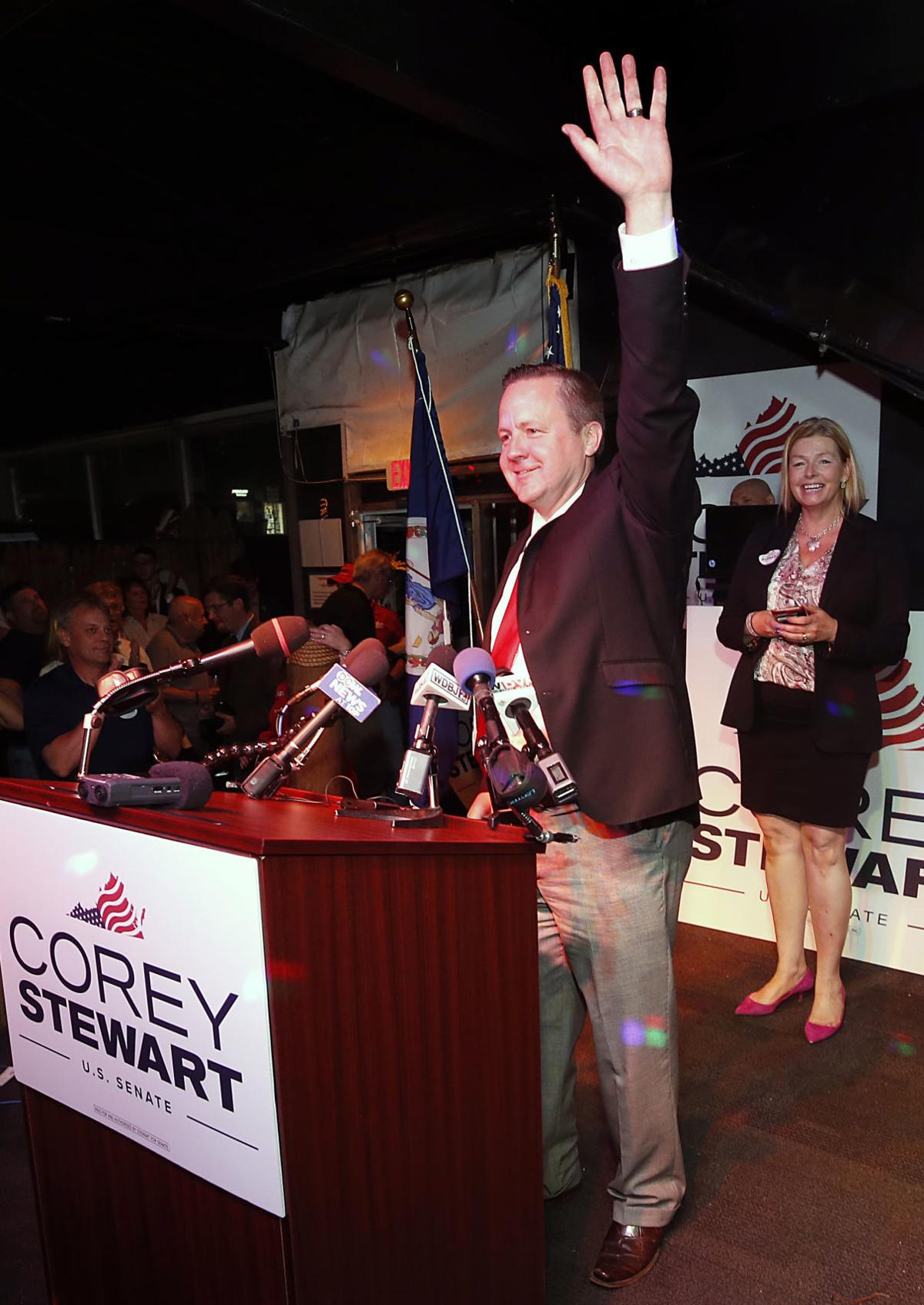 Sen. Tim Kaine, D-Va., said Wednesday that he’s glad he finally has a challenger in November and looks forward to highlighting differences with Republican Senate nominee Corey Stewart on policy and vision for Virginia.

Also Wednesday, President Donald Trump offered an endorsement of Stewart, posting a statement on Twitter saying he has “a major chance of winning” in November and calling Kaine a “total stiff.”

One group was far less vocal about discussing Stewart: his fellow Virginia Republicans on the November ballot.

Stewart’s close win over state Del. Nick Freitas, R-Culpeper, followed a campaign in which Freitas generally ignored Stewart, the chairman of the Prince William Board of County Supervisors, but in the final week launched an aggressive attack, singling out Stewart’s past ties to white nationalists.

The Richmond Times-Dispatch posed questions about Stewart on Wednesday to the campaigns of U.S. Reps. Barbara Comstock, R-10th; Dave Brat, R-7th; Scott Taylor, R-2nd; and Rob Wittman, R-1st, as well as GOP congressional candidates Denver Riggleman in the 5th District and Del. Ben Cline in the 6th, all of whom will be on the ballot this November with Stewart at the top of the ticket.

None of them answered.

Stewart is controversial and lends full-throated support to Trump, and some of these candidates might fear he would be a drag on their chances.

Asked about the silence from fellow Republicans, Stewart campaign manager Matt Brown offered a statement that said: “The president — who supports our campaign — has never been afraid to stand up to the leftists or the media, and the party is 100 percent behind” Stewart.

Freitas’ late attack highlighted Stewart’s past association with Jason Kessler, the white supremacist who, after holding an event with Stewart last year, went on to coordinate a torch rally in Charlottesville and then the August “Unite the Right” rally that turned deadly.

Freitas also highlighted Stewart’s praise in January 2017 of Paul Nehlen, a far-right Wisconsin politician who lost in a primary run to House Speaker Paul Ryan in 2016 and later made anti-Semitic posts on Twitter.

“Corey Stewart has repeatedly made serious lapses in judgment with the people he associates with politically,” Freitas said in an email to supporters last week. “This pattern of behavior is especially disqualifying for a candidate seeking higher office.”

Stewart responded last week that a video he posted praising Nehlen came before Nehlen made the anti-Semitic social media posts, and Stewart said he wants nothing to do with Kessler.

The neo-Nazi website Daily Stormer on Wednesday heralded Stewart’s win, although it predicted he would lose to Kaine.

The Times-Dispatch on Wednesday asked the GOP congressional candidates if they agree with Freitas, or with GOP Chairman John Whitbeck’s statement last week that there was no firm evidence that Stewart sympathized with white nationalists, and asked them if they planned to campaign with Stewart.

Katey Price, campaign manager for Brat, emailed back but did not answer the questions. Her statement: “We’re not focused on personalities or other people, we’re just running our race and sticking to our positive message about Congressman Dave Brat, a hard-working, independent, common sense representative for the people of the 7th District who has kept his promises.”

Democrats on Tuesday nominated former CIA officer Abigail Spanberger to challenge Brat in a district that the national party is hoping to flip.

On Wednesday evening, Cline tweeted congratulations to Stewart on his primary win, adding: “Let’s all unite together this fall to #RetireTimKaine!”

Kaine, in a conference call with reporters, said he doesn’t think Virginians want Stewart’s “ruthless and vicious” style. He singled out Stewart’s opposition to Medicaid expansion and the federal Affordable Care Act.

Kaine said Stewart is “cozying up to purveyors of dangerous white supremacy or anti-Semitic views, and sort of stoking those for his own political gain.”

When asked how he reacted to Trump’s statement Wednesday calling Kaine a “total stiff,” Kaine said he laughed at it. He said he likewise won’t be fazed by Stewart’s name-calling.

“Most of us learn to shrug that off, if we’re mature, by about the sixth or maybe seventh grade at the latest,” he said. “That’s not going to bother me at all. … You use a name-calling strategy when you’re desperate.”

Kaine also said he thinks his message will resonate with Republicans who are discouraged at what their party has become, as evidenced by the Stewart nomination.

Last year, Corey Stewart didn’t get to test his theory that Virginia Republicans could snap their losing streak in statewide elections with an…

Corey Stewart has a theory. Republicans can win statewide in Virginia for the first time since 2009 if they just pick him as their nominee, if…

Americans for Prosperity, the libertarian-leaning political organization founded by brothers Charles and David Koch, says it will not assist p…

Corey Stewart, chairman of the Prince William Board of County Supervisors, spoke to supporters Tuesday during his primary victory party at The Electric Palm Restaurant in Woodbridge.