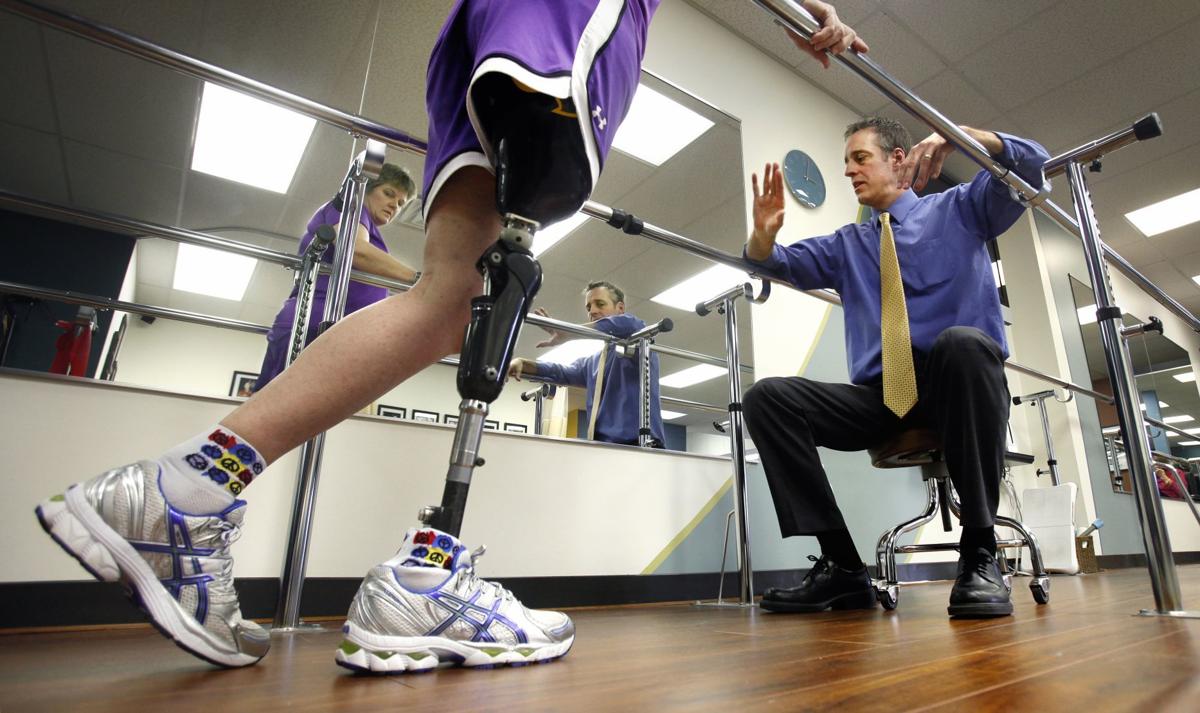 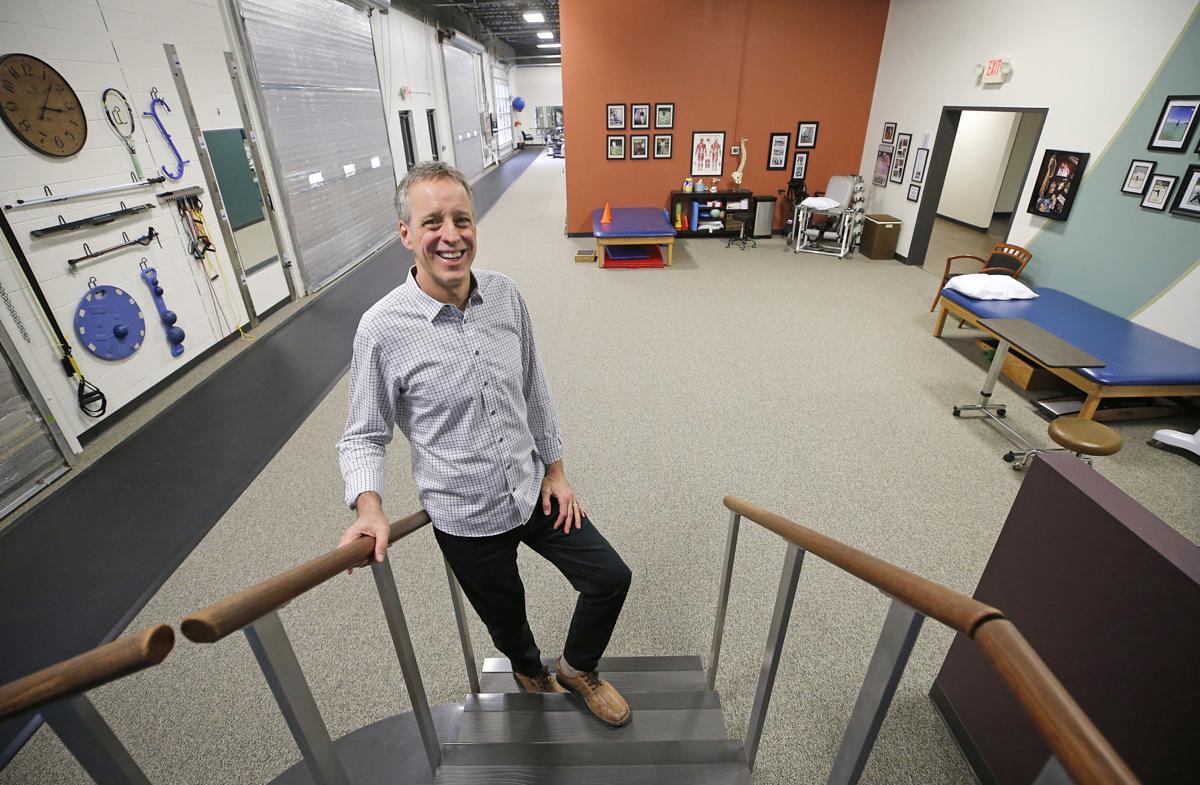 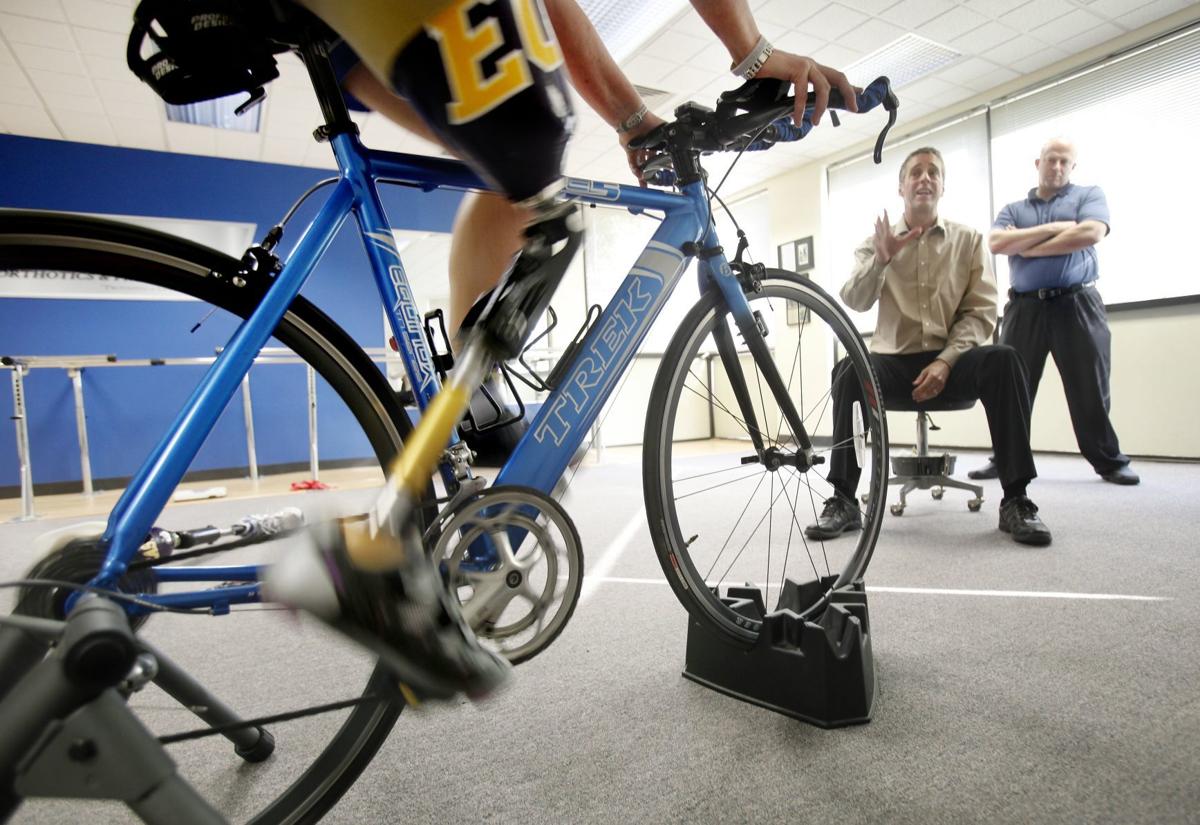 David Lawrence, who owns The Gait Center, Lawrence Rehabilitation Specialists, stands in the center’s new home off Staples Mill Road in Henrico County. He focuses on treating patients with gait issues, aiming to help even those with the most complex disabilities — including amputees — to walk again. 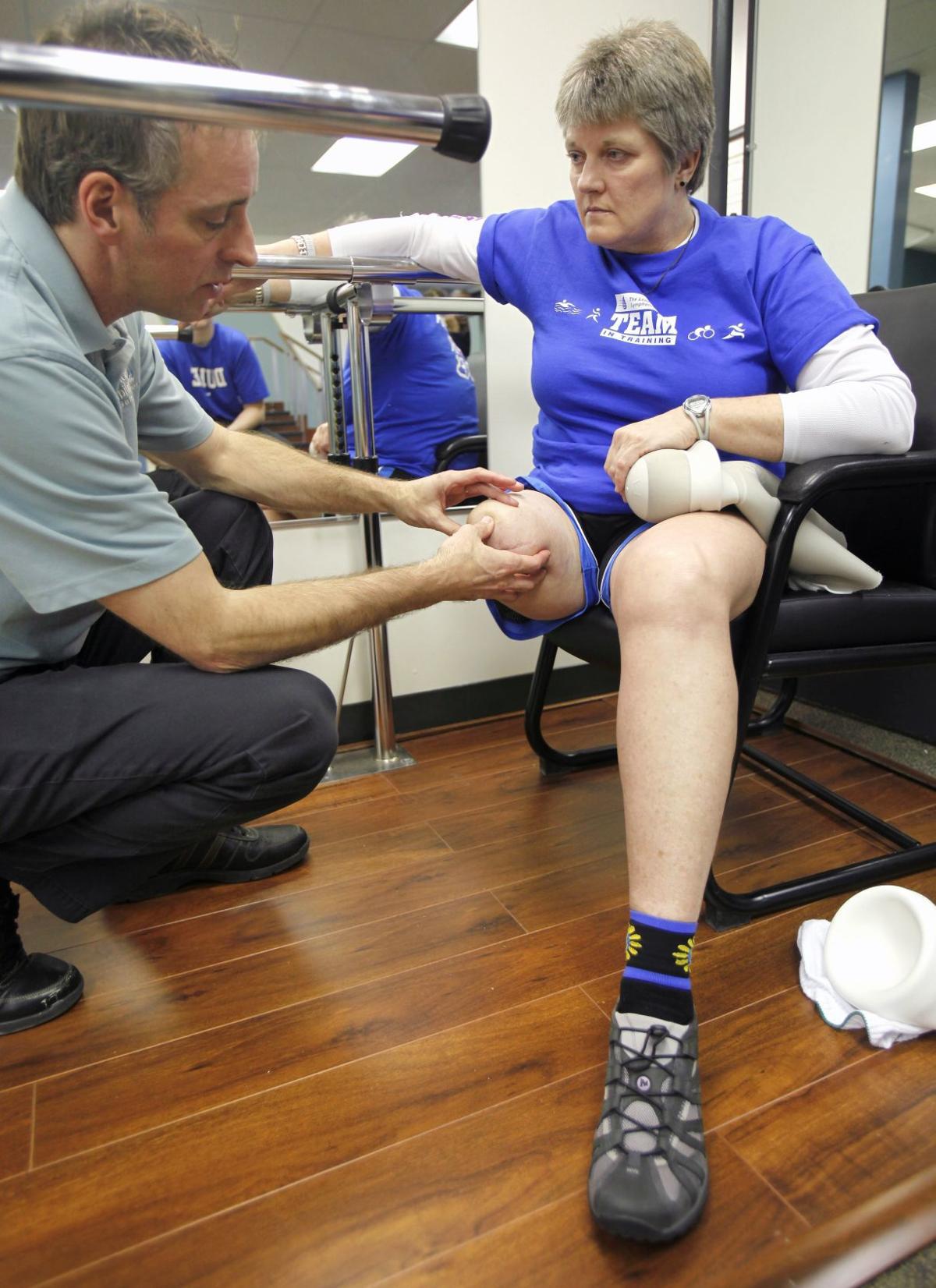 Lawrence worked with Robin Yoder in 2011. Yoder had bone cancer in her right leg, which was amputated in 2010. She has continued running with her prosthetic leg and completed a triathlon after her amputation.

David Lawrence was like an enthusiastic kid leading a tour through his new digs for The Gait Center, Lawrence Rehabilitation Specialists.

The site has 50 feet of parallel bars; a straightaway, 40-yard-long running track; and floor ladders for agility drills, but, most of all, open space, which allows greater opportunities for therapists working with patients.

“The space to do what we want to do,” said Lawrence, noting the new home for The Gait Center just off Staples Mill Road is three times the size of his former location. “It’s all about getting people back walking again. From young people to older; there’s a mix of teenagers to 90-year-olds.”

Lawrence, 57, has worked in physical therapy for nearly 30 years. Over time, he has come to focus on treating patients with gait issues, aiming to help even those with the most complex disabilities — including amputees — to walk again. Now, he has broadened his reach.

Lawrence has launched Mission Gait, a nonprofit organization with the goal of changing the way rehabilitation is provided to patients with complex gait disabilities through research and education. He plans to share his rehabilitative methods with health care providers around the country and reinforce them through certification and periodic gatherings to share best practices.

The result, Lawrence says, would be a network of therapists nationwide with the knowledge and skills to help such patients and an easy way for patients to find them.

“We have a number of patients who come two, three, four hours,” Lawrence said. “It’s been frustrating to me that I have people coming hours and states away for therapy they should be able to get in their backyard.”

I first became acquainted with Lawrence almost a decade ago when I wrote about Lindsay Ess, a young woman who lost her arms and legs to a massive infection that had threatened her life and who was learning to walk on prosthetics.

We’ve crossed paths a number of times since then as I’ve done stories on other patients, such as Cor’Rales Dupree, who was shot in his left leg as he protected his mother and younger brother from his mother’s

enraged ex-boyfriend. The severity of the gunshot wounds forced surgeons to amputate the leg above the knee.

His rehabilitation at The Gait Center helped him earn a scholarship to play wheelchair basketball at a university in Pennsylvania and become the first member of his family to attend college, in a very real sense the fulfillment of a lifelong goal for a young man who once dreamed of playing professional football.

Then there was Robin Yoder, an accomplished athlete and basketball star who had received an athletic scholarship when she was diagnosed with bone cancer in her right leg. Doctors saved the leg, but her college basketball career was over before it started. In later years, she turned to running and triathlons and, then, three decades after the first diagnosis, cancer showed up again in the same leg, and this time it couldn’t be saved.

Her leg was amputated in 2010, and she set to work with Lawrence and others at The Gait Center adjusting to what she described as her “new life,” which she hoped would look a lot like the old one. She started walking, then running. Within two years, she completed another triathlon. Last fall, she ran a 5K without any attention, without feeling like a novelty for running with a prosthetic leg.

“I didn’t tell anybody,” said Yoder, an oncology social worker and co-founder of the Hawthorne Cancer Resource Center at Johnston-Willis Hospital. “I just showed up and ran it and went home. I loved it. It was the best moment of these eight years. I was out here doing it without any entourage.”

It was her “new normal,” but it felt normal.

“Robin Yoder was still Robin Yoder,” Lawrence says now of Yoder, who also serves as director of education for Mission Gait. “She lost her leg, but she didn’t stop being Robin Yoder. With bad therapy or a lack of confidence, Robin Yoder could have become a different person. Part of my job is, ‘Let’s give Robin Yoder the best chance to still be who she is.’”

Last weekend, Yoder organized a one-day skills and activity clinic for lower-limb amputees sponsored by Mission Gait. She is becoming one of the “earth angels” she talks about who helped her along this journey. Lawrence and his team at The Gait Center were among them.

Lawrence doesn’t consider what he does so much a magic treatment as a specialized approach of individualized attention for amputee patients whose needs are different from those with less complex ambulatory issues. That type of approach is more expensive and labor intensive, though, meaning fewer places offer that kind of therapy, leaving more patients who have to drive great distances to get the help they need — if they can find it at all.

For years, Lawrence has invited students in local therapy programs to The Gait Center. He has even taken what he knows on the road, teaching courses for therapists around the country, though he came to consider that effort “a waste of time” because he’d be asked to return to the same city a few years later to teach the same classes to the same kind of people. His earlier instruction had not taken hold. Why?

“No one did anything with it because they went back [to their jobs] and their administrator wouldn’t support them treating patients like this,” Lawrence said.

Those experiences helped him come up with the concept of Mission Gait, which he believes would be more sustainable — something he views as critical for the growing number of amputees across the country. The Amputee Coalition of America estimates there are 185,000 new lower extremity amputations each year within the U.S. and an estimated population of 2 million American amputees, with the projected number to almost double by 2050.

The causes behind amputations include diabetes, trauma and cancer, and the fact that medical advancements are enabling more patients to survive conditions that might have killed them a generation ago, though with missing limbs.

Launching such an ambitious project is an expensive endeavor, but he found a champion in the Gottwalds, a prominent Richmond family in business and philanthropy who had been patients of Lawrence’s over the years. In gratitude for the care she had seen her family receive, Ann Parker Gottwald approached Lawrence and asked if he had a foundation — in years past, Lawrence had held prosthetics clinics in underserved countries around the world — to which she could make a donation. He explained his idea for Mission Gait, which he said if done right could make itself obsolete in 20 years.

She agreed to help him raise money and awareness, and now she’s president of the Mission Gait board.

“The stories are what captivate me,” Gottwald said of the patients Lawrence has worked with over the years, helping them overcome what might seem like insurmountable odds to walk or even run again. “He doesn’t make it a factory; he really tries to hone in on what that person needs. It’s not just general physical therapy. He has so much success with it.”

Another supporter is Todd Allen, a Newport News manager with Hanger Clinic, which is described as the world’s leading provider of prosthetics and orthotics. Hanger sponsored a Mission Gait event for therapists in Newport News last year.

“Amputee gait training experience amongst physical therapists varies,” Allen wrote in an email. “Some therapists routinely treat amputees; others may rarely see this patient population. Amputee gait is complex and many factors need to be recognized. When collaboration and proper training are not present, the outcome for the amputee is not optimal and this patient population is underserved.”

At a holiday gathering at The Gait Center in November, Lawrence updated patients and supporters about Mission Gait. Among the guests was Paul Noll, a patient who underwent a below-knee amputation because of severe infection. Before meeting Lawrence, he had become frustrated and despondent with his lack of progress. He was barely able to stand on his leg, much less walk, he said.

“I was getting very depressed, didn’t want to get out of bed,” Noll said. “When you look over and see part of your leg gone, there’s no reason to get up.”

But within three weeks at The Gait Center, he was walking and eventually returned to favorite pastimes of softball and golf.

He credits Lawrence with steering him through the process step by step with encouragement and empathy.

“The thing with David is, when he works with you, he’s right there the whole time,” Noll said.

David Lawrence, who owns The Gait Center, Lawrence Rehabilitation Specialists, stands in the center’s new home off Staples Mill Road in Henrico County. He focuses on treating patients with gait issues, aiming to help even those with the most complex disabilities — including amputees — to walk again.

Lawrence worked with Robin Yoder in 2011. Yoder had bone cancer in her right leg, which was amputated in 2010. She has continued running with her prosthetic leg and completed a triathlon after her amputation.