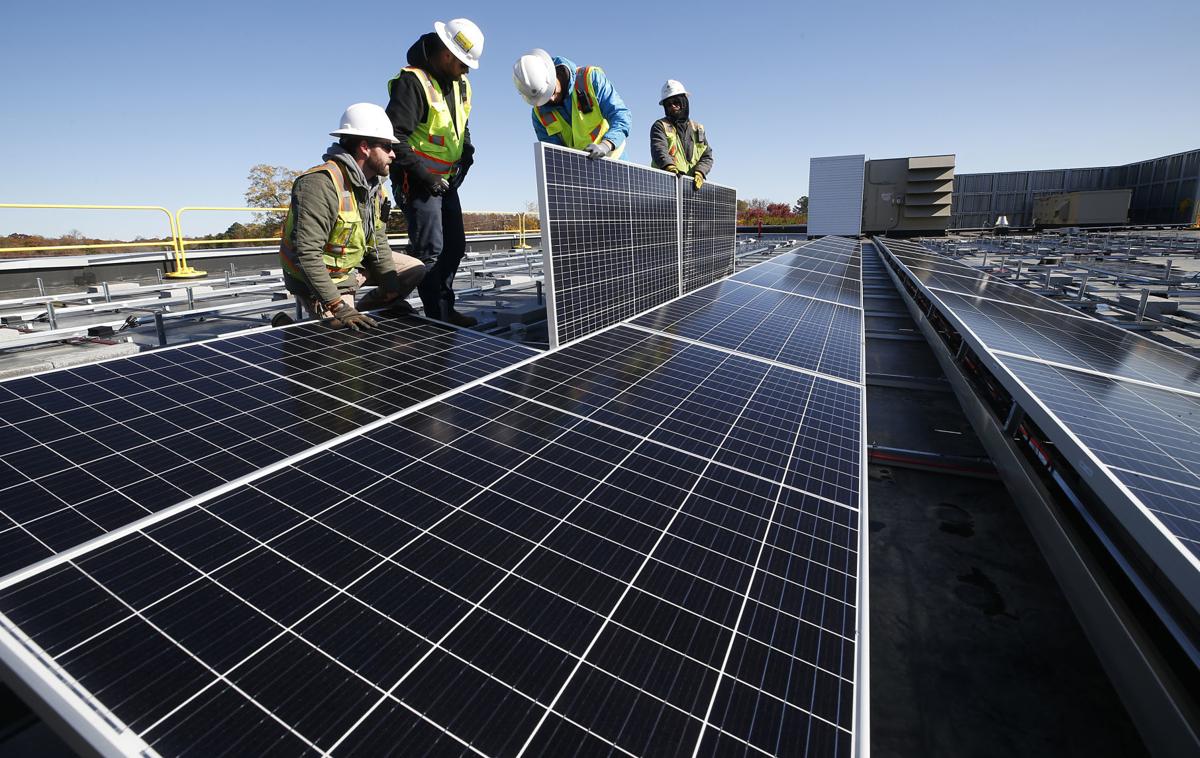 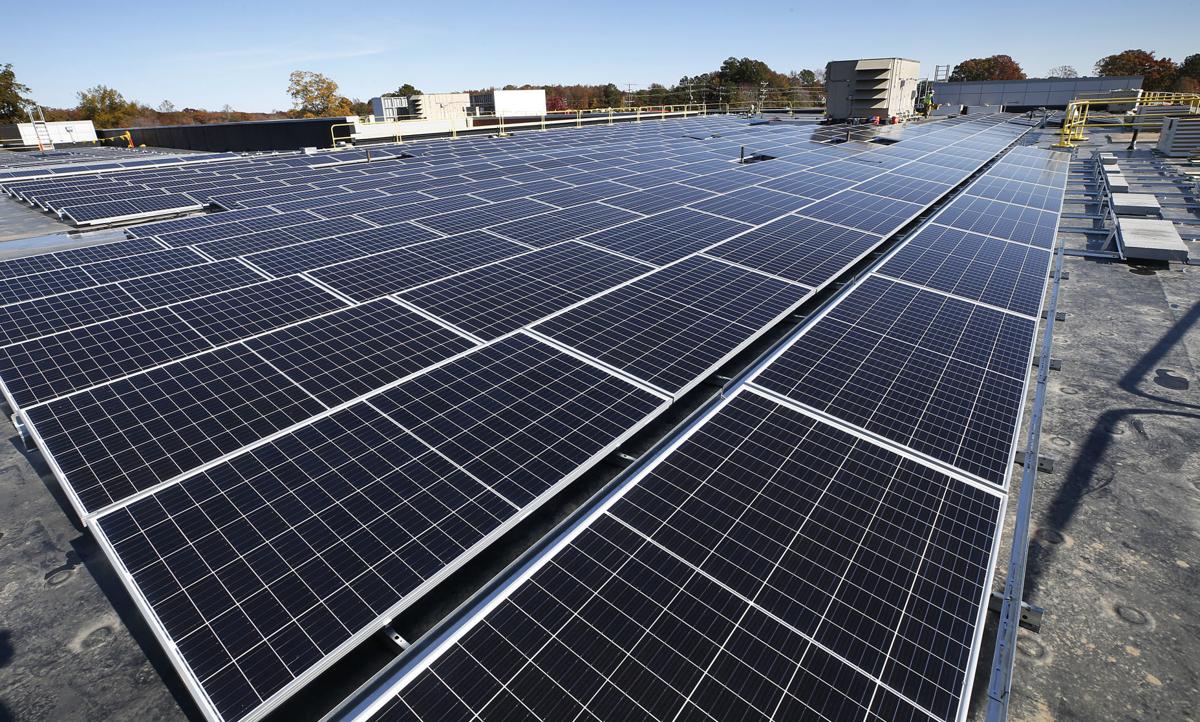 These are a few of the solar panels that Sun Tribe is installing on top of Powhatan Middle School Wednesday, November 13, 2019. 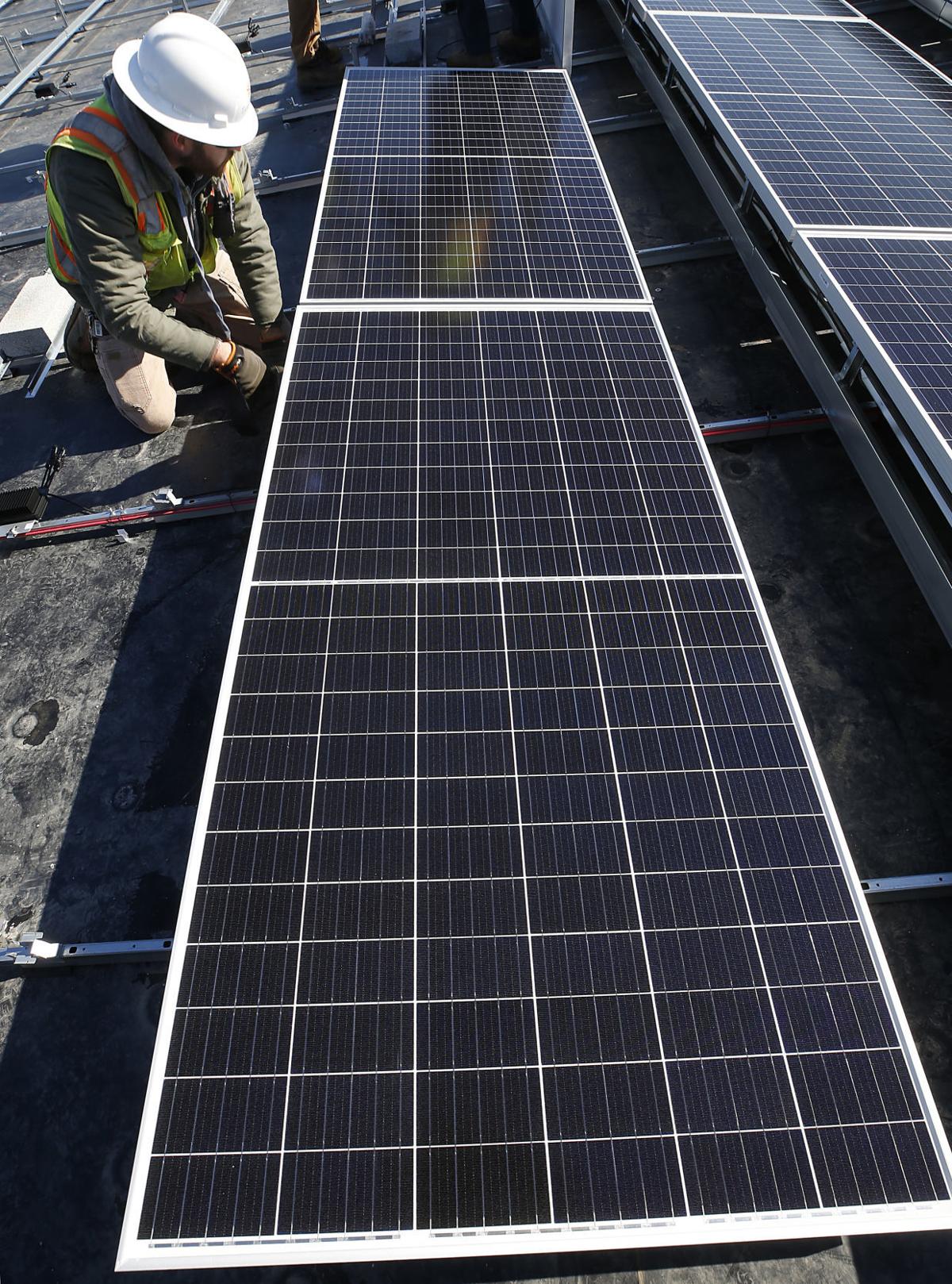 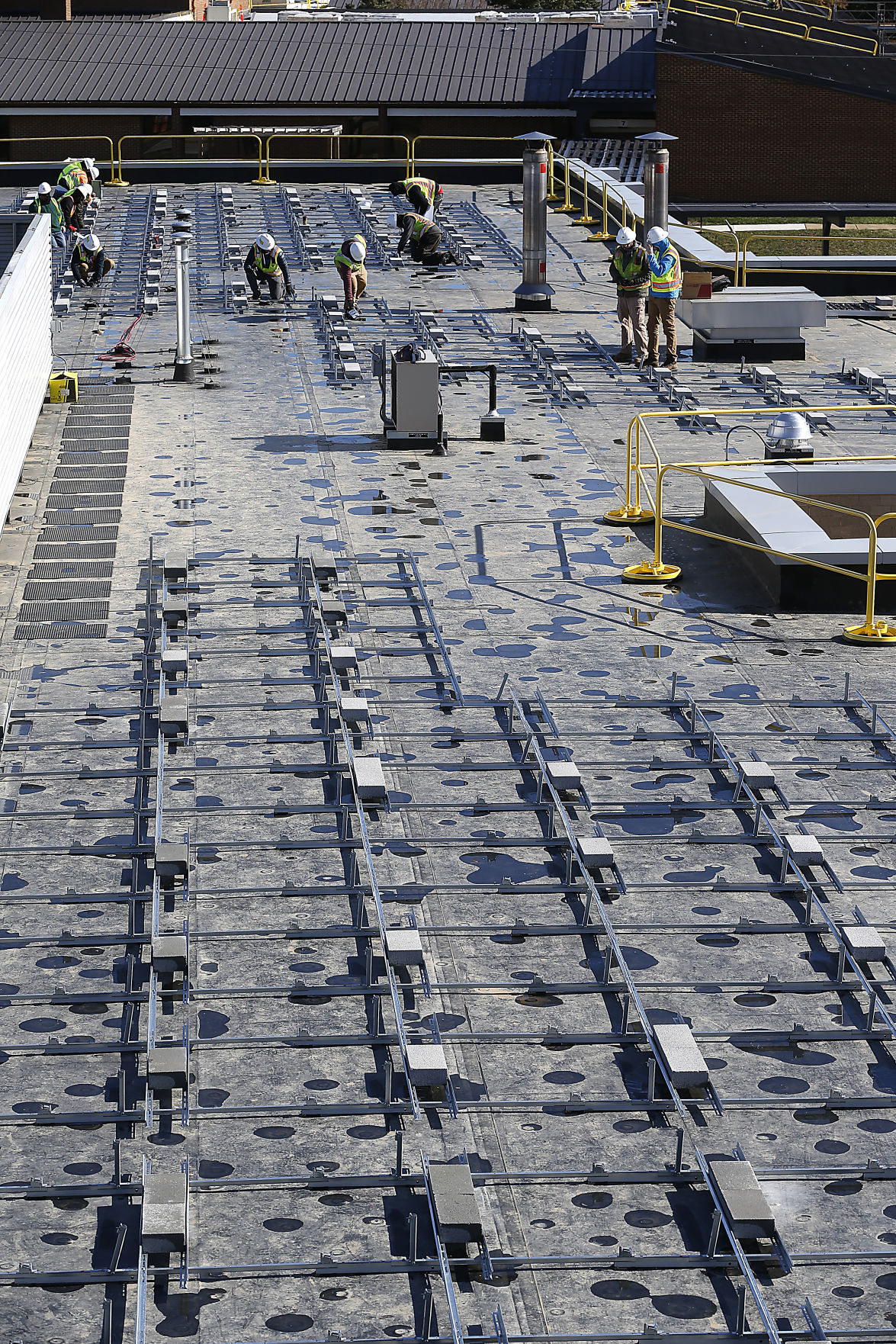 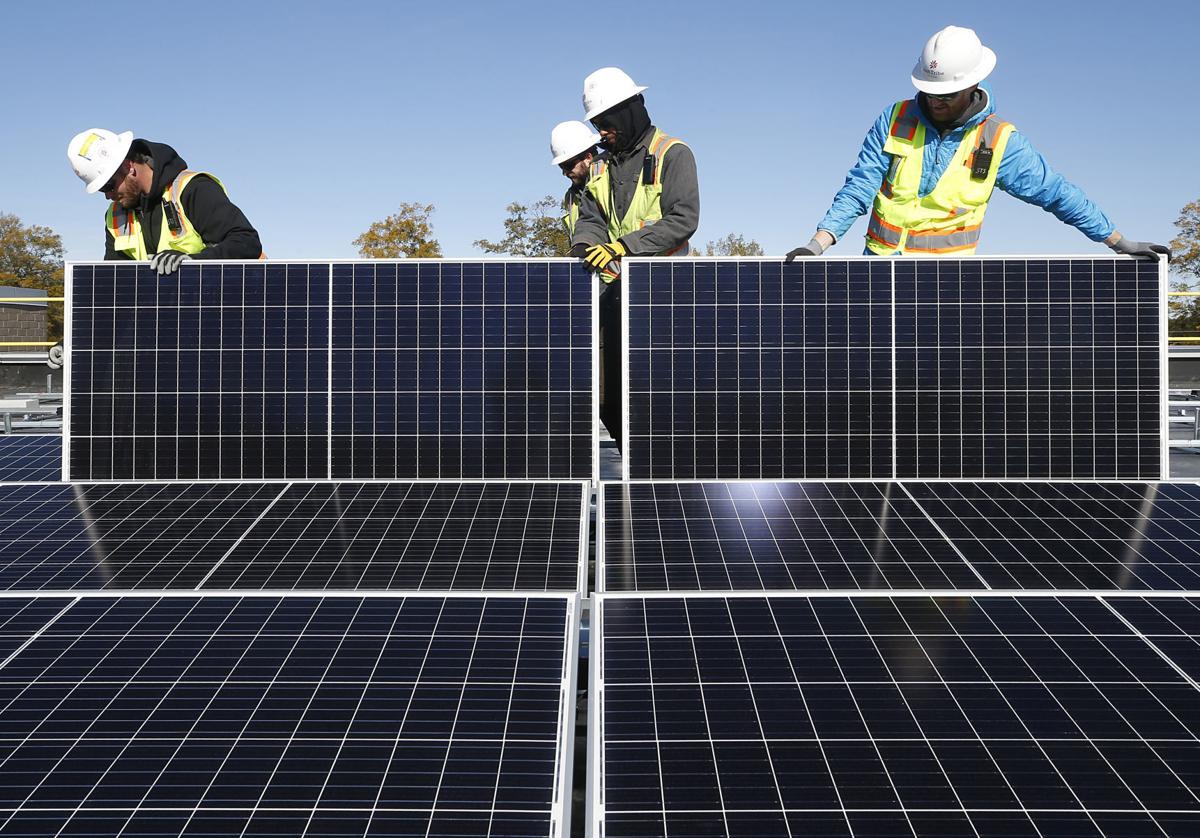 Powhatan County is installing solar panels on four schools, including Powhatan Middle. The panels are expected to save $3 million over 30 years. 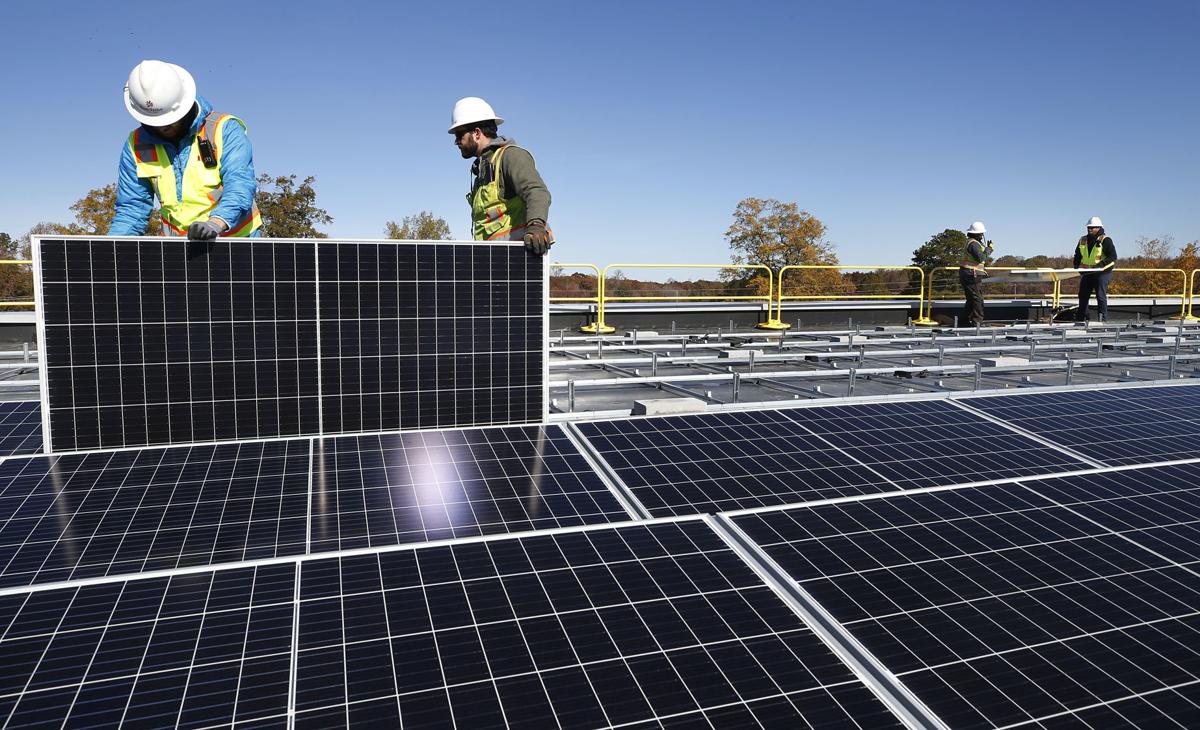 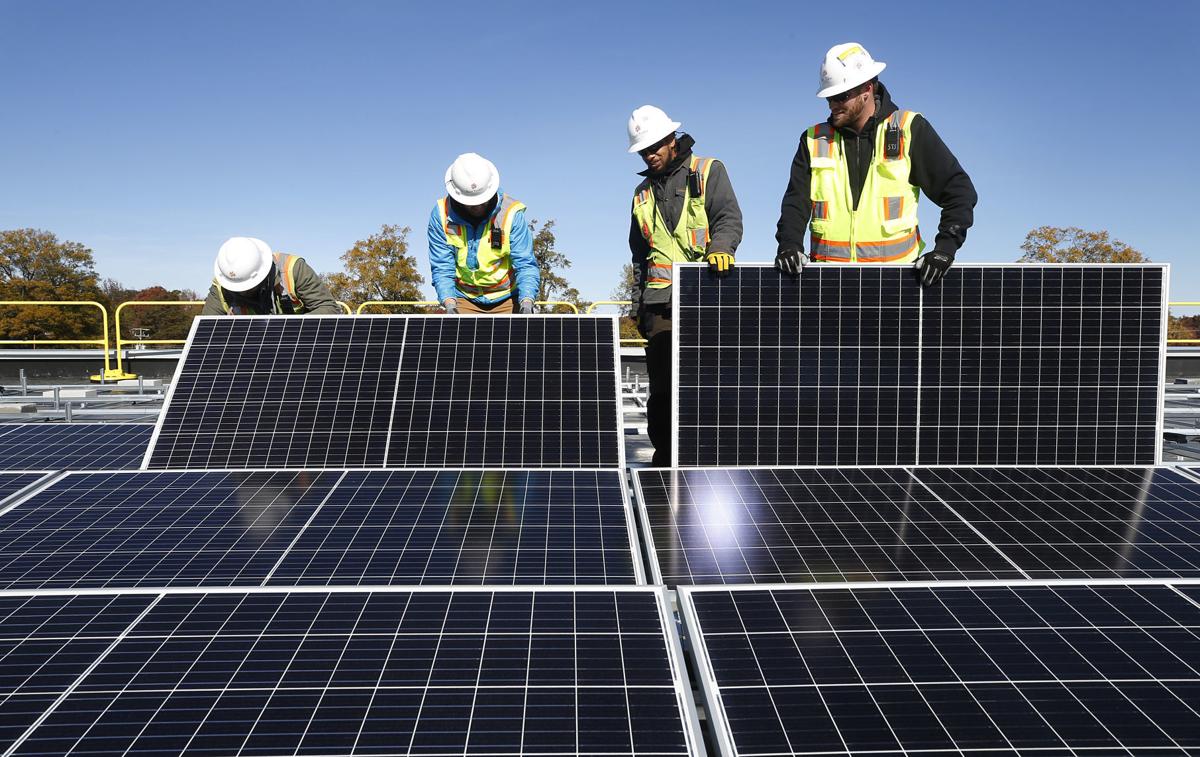 Schools in the Richmond region are starting to catch some sun.

The number of area schools with solar panels has increased six-fold in the past two years, mirroring a statewide trend as school districts use a new policy tool to save money on energy costs.

“Richmond is at the forefront,” said Devin Welch, the chief strategy officer for Sun Tribe Solar, a Charlottesville-based solar energy company that does installations across the state.

Before 2018, just four schools in the region — Goochland High School, St. Catherine’s School in Richmond, James River High School in Chesterfield County and Mary Munford Elementary School in Richmond — had solar panels, according to data from Charlottesville-based advocacy organization Generation180. In the past two years, 20 additional schools have installed some sort of solar energy.

School systems have power purchase agreements with Sun Tribe and other companies. Through the agreements, the companies purchase, own and maintain the solar panels just like any other energy business. The school district agrees to buy the electricity produced by the solar energy system, normally for at least 25 years.

“The opportunity to lower your energy costs, and lock that low rate in for decades to come, by going solar through a PPA and then recycle those dollars into other operations, be it teacher salaries, computers in the classroom, what have you — that’s impossible to resist,” said Harrison Godfrey, the executive director of Virginia Advanced Energy Economy.

The General Assembly approved a pilot program in 2013 for the agreements with a 50 megawatt limit. As of this month, 80% of that cap has been used, according to Generation 180. If the 50 megawatt limit is reached, which is on track to happen, no more agreements will be allowed until lawmakers raise or remove the limit.

In the past two years, the number of Virginia schools with solar has nearly tripled — from 29 to 86. In 2014, just 13 schools in the state had solar.

“More and more schools in Virginia are now reaping the financial and educational benefits of solar,” said Tish Tablan, program director for Generation180. “We want to ensure all schools have access by removing restrictive policy barriers as soon as possible.”

The city of Richmond has the most solar schools (13) and the most solar capacity (3,021 kilowatts), according to data released Tuesday by Generation180. An elementary school might, for example, use about 800,000 kilowatt hours in a single year.

“It’s a good opportunity to teach students how to be good students of the environment and care for the environment,” said Wendy Fewster, the sustainability coordinator for Richmond Public Schools.

Panels at J.B. Fisher Elementary and G.H. Reid Elementary are expected to be fully installed before the end of the calendar year.

While Richmond has the most schools using solar energy, the growth is quickly spreading to surrounding counties.

Henrico County doesn’t have solar panels at its schools yet, but they’re being installed at the rebuilt J.R. Tucker High and Highland Springs High, along with the expansion at Holladay Elementary School. The county has already had 986 panels installed on the roofs of Libbie Mill Library and the Mental Health Center East.

The county school system is expected to save $10.2 million over the 30 years of its agreement with Sun Tribe, said Terry Stone, the company’s assistant superintendent for business and operations.

Hanover isn’t the only school district partnering with Sun Tribe.

Eric Jones, the county’s schools chief, said a group of students asked the district’s school leaders three years ago to look at solar energy. Besides saving money on energy — Powhatan is expected to save $3 million over 30 years — the panels provide a learning experience for students, Jones said.

“That’s money we can put back into the district,” Jones said. “It’s also a way for us to lead the way in setting a good example for our students and our community in terms of renewable energy.”

He added: “We really thought it would create some real-world learning our students and teachers could benefit from.”

Ninety-four percent of the statewide solar growth, according to Generation180, was financed with the power purchase agreements. Albemarle County was the first school district in the state to have a third-party agreement for solar energy, approving its plan in 2015.

Middlesex County Public Schools, for example, has solar energy power at its elementary and middle schools now. Another solar project is being installed behind the county’s high school, located about an hour east of Richmond.

With the electricity rate locked in, schools chief Pete Gretz said it helps the school district save money — it saved just under $50,000 at its elementary school site last year — and inform students, who look at a display in the school showing data on how much energy is being generated through the panels.

“There’s no drawback to this,” Gretz said. “It’s completely a win-win.”

These are a few of the solar panels that Sun Tribe is installing on top of Powhatan Middle School Wednesday, November 13, 2019.

Powhatan County is installing solar panels on four schools, including Powhatan Middle. The panels are expected to save $3 million over 30 years.