Schapiro: At Va.'s Capitol, the South falls again
10 comments
Share this
{{featured_button_text}}
1 of 2 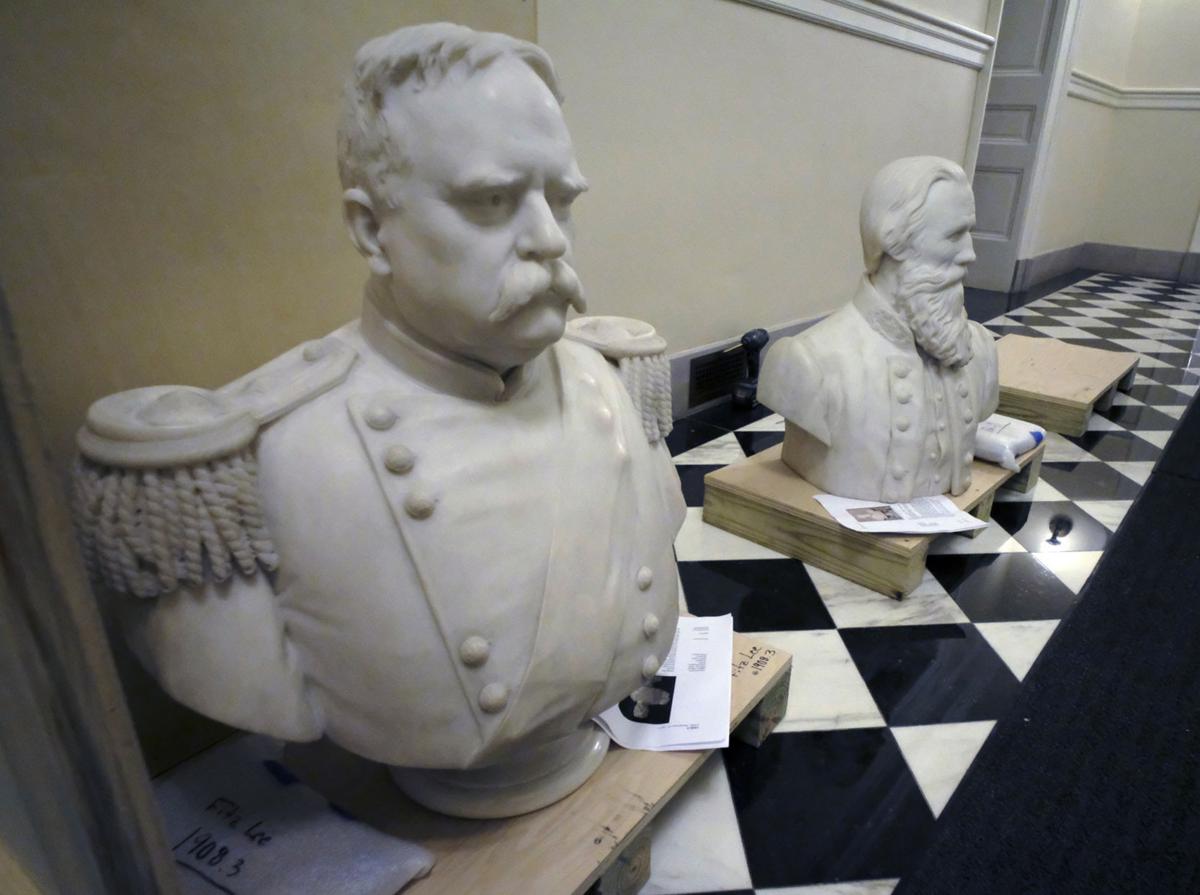 Eileen Filler-Corn, D-Fairfax, speaker of the House of Delegates, at week’s end dispatched to storage likenesses of eight dead, white Southern males, ordering the removal of a statue of Robert E. Lee and busts of seven Rebel leaders from the Old House Chamber, wherein met the Virginia secessionist convention and the Confederate Congress, when Richmond was the seat of the failed revolt to preserve Black slavery.

Private crews worked through the night, hauling off at 4:30 a.m. Friday the last of the bronze and marble likenesses to an undisclosed location. The speed and relative secrecy with which they worked recalled a similar moment in majority Black New Orleans in 2017, when three of four Confederate monuments — having been declared a public nuisance by city council — were yanked down under cover of darkness.

Morning barely had broken in Richmond when a legislative commission recommended — and Gov. Ralph Northam, a descendant of slave-owning Confederates, endorsed — removing a statue of Lee from the U.S. Capitol, where with one of George Washington, stand statutes representing each of the 50 states. Lee’s replacement hasn’t been determined but it seems a safe bet that it will be a person of color, a woman or both — a recognition that too long Virginia’s history has been told as a one-dimensional story.

In contrast with the combat in the streets and courts over Richmond’s Confederate monuments and the state-owned Lee statue — to critics, the symbolic remaining head of the hydra of Lost Cause-ism — Filler-Corn erased history by being sneaky. It can be commendable in a politician, a measure of his or her artfulness. And, like it or not, Filler-Corn pulled off a masterpiece.

Filler-Corn, herself a historic figure as Virginia’s first female and Jewish speaker, quietly had been working on this project for weeks, fully researching as well the extent of her authority to unilaterally clear the Old House Chamber of what the woke forces that, post-George Floyd and pre-presidential election, are pushing the Democratic Party further to the left, consider unwelcome Confederate squatters.

It fell to Suzette Denslow, the House clerk, to carry out Filler-Corn’s scheme and to do so leaving as few fingerprints as possible. That’s been Denslow’s hallmark over a long career as the right hand to mayors and governors. It was Denslow, for instance, who oversaw the complex deal under which a Washington football team that must not be named began holding summer practice in Richmond at a field paid for with bonds underwritten by a local hospital.

And Filler-Corn kept the plan largely to herself, notifying the governor’s office, with which she and Senate Majority Leader Dick Saslaw share control of Capitol Square, and several key Democratic legislators, white and Black. She did not share it with the House Rules Committee, which she leads and that oversees access to, and upkeep of, the state Capitol. No one in the Republican leadership was told beforehand — a move driven by politics and security.

Republicans, of course, erected the legal obstacle that, until it was razed this year by the new Democratic majority, stopped localities from dismantling Confederate monuments. Plus, bringing Republicans into the loop might have blown Filler-Corn’s cover. And leaks ultimately could lead to more of the mayhem that has been roiling Richmond for months, scrambling Mayor Levar Stoney’s ambitions for a second term.

At the Jefferson-designed state Capitol, an edifice that is a workplace and a working museum, one cannot consider Filler-Corn’s monumental maneuver without considering politics. It clearly strengthens her standing within the House Democratic Caucus, particularly among the Northern Virginia and Black delegates who — when on the same page — pretty much control the joint.

A notable exception, indeed, an outright loss for Filler-Corn and this coalition: Their failure to sink a constitutional amendment largely stripping the General Assembly of its redistricting power. They say it’s unfair to communities of color. But it’s what they don’t say that is more important: That surrendering control of redistricting could unravel the presumed congressional ambitions of such delegates as Lamont Bagby of Henrico County and Cia Price of Newport News.

And what they say about the remaining icons at the statehouse of the Confederacy and the state’s segregationist past — Filler-Corn has named a panel to consider their future, presumably in coordination with the Senate — will not only be a measure of their mastery of history but an opportunity to make clear to the New Virginia the complexities of the Old Virginia.

Does that mean Harry Byrd Sr.’s statue comes down because he masterminded Massive Resistance, never mind that he also modernized Virginia government? And what of Mills Godwin’s portraits? As a legislator, he voted to close public schools rather than bow to court-ordered desegregation. As a governor, he skunked his skinflint friends in the General Assembly, winning the sales tax that keeps public schools open.