Schapiro: Morrissey and Democrats kiss and make up - kinda
5 comments
Share this
1 of 2 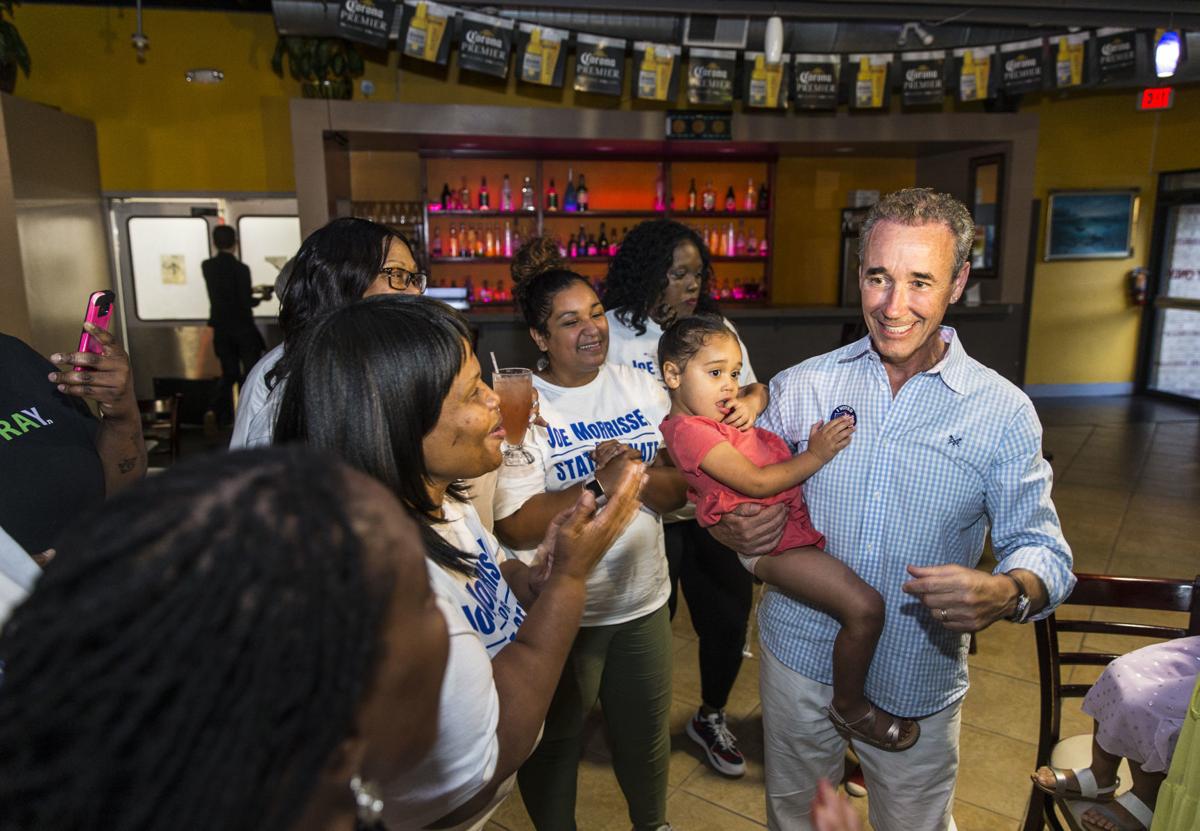 Joe Morrissey, with his daughter, Bella, 3, celebrated his Democratic primary win in the 16th District state Senate race with his supporters at an election party in Petersburg in June.

Over coffee one day, beer the next; at an office in Northern Virginia and in a telephone call while he helped his toddler daughter use the potty, Joe Morrissey and the Democratic grandees who failed to block his latest comeback are trying to make nice.

Control of the Virginia Senate could depend on it.

The romancing of Morrissey — underway since the enfant terrible of Richmond politics snatched the Democratic Senate nomination from incumbent Rosalyn Dance in June — is accelerating.

Dick Saslaw, the Senate minority leader, and former Gov. Terry McAuliffe, considering running for his old job in 2021, will headline a fundraiser for Morrissey in early October at his home on the city’s North Side to help erase a $125,000 debt.

It is a sign that the Democratic establishment — because of expediency, necessity or both — is committing to Morrissey the prestige and financial power that could not save Dance, who had become a pariah in her hometown of Petersburg.

“I will do anything I can to help Democrats running for the House and Senate,” said McAuliffe, who already has made more than 70 appearances for the party’s candidates, has another 45 planned and has steered $400,000 from his PAC to the Democratic Party of Virginia.

It is certain that Morrissey will be elected in November. He faces nominal opposition from an independent who had been his aide when Morrissey was in the House of Delegates.

It is uncertain what Morrissey will do in January. He will take his seat in the Senate but — presumably to maximize his leverage — is not saying whether he would vote to give Republicans working control of the 40-member chamber if it were again evenly divided.

“I plan to be a part of the Democratic caucus,” said Morrissey. “I would like to leave it at that.”

He declined to elaborate. Does he have to?

Though Democrats are increasingly confident they can take back the Senate — “I’d rather be where I am now than where Tommy Norment is,” said Saslaw, referring to the Republican majority leader — their best-laid plans could go awry because of the wild card that is Morrissey.

If there are 20 Democrats and 20 Republicans, the tie-breaking vote of the Democratic lieutenant governor, Justin Fairfax, would ensure Democrats control the calendar and committees, unless the predictably unpredictable Morrissey defects, siding with Republicans in organizing the Senate.

Morrissey could trade his votes for favorable consideration of legislation or plum committee assignments.

That might include a seat on the courts committee, raising the intriguing possibility that Morrissey — a disbarred criminal lawyer with a long history of questionable personal and professional conduct — would have a direct hand in writing criminal laws.

So it makes perfect sense that high-powered Democrats — among them, Saslaw, McAuliffe, gubernatorial chief of staff Clark Mercer and his boss, Gov. Ralph Northam — woo Morrissey.

It is a contingency plan by Democrats who know that 21 seats in the Senate is good, making for an absolute majority, but that 22 is better, minimizing their dependence on Morrissey.

They’re guided by make-believe mobster Michael Corleone’s maxim about keeping friends close and enemies closer, though a real-life politician, Lyndon Johnson, had an earthier way of putting it, conjuring an image of men inside a tent knowing which direction to turn when relieving themselves.

The effort at reconciliation between Democrats and Morrissey has been a bilateral exercise, with them reaching to him and him reaching to them.

It’s not just about appearing unified this year, it’s about unpleasant business from four years ago.

On primary night, Morrissey took a congratulatory call on his mobile phone from Northam as the nominee was assisting his 3-year-old daughter, Bella, in the bathroom at the Mexican restaurant where he and supporters awaited returns from across the majority-African American district stretching from Petersburg to Richmond.

About a month ago, Morrissey traveled to Northern Virginia, where he grew up, to meet with Saslaw at his office.

They discussed the current campaign; Saslaw’s first for the Senate, in 1979, in which Morrissey was a 20-something volunteer, and a still-sore subject for Morrissey: How in 2015, Dance’s political apparatus, backed by lawyers from Washington, used its control of party machinery to thwart him for the Senate by keeping his name off the primary ballot.

That “anoint-and-appoint” thinking, as Morrissey put it, is one of his big differences with Democrats, he said.

“But my agenda is consistent with the Democratic Party agenda,” said Morrissey. “That’s why — maybe — we’re in sync.”

This past Wednesday, Morrissey had coffee with Mercer in Shockoe Slip, a quick walk from the state Capitol. And on Thursday evening, McAuliffe conferred with Morrissey over craft beer at a West End pub.

Since the primary, Morrissey also has heard from Republicans: Jill Vogel and Emmett Hanger, both moderates; and Bill Stanley, Morrissey’s lawyer in his latest disciplinary fight with the courts and Virginia State Bar.

Despite his potentially decisive role in the next Senate, neither Democrats nor Republicans asked for anything, said Morrissey.

Joe Morrissey, with his daughter, Bella, 3, celebrated his Democratic primary win in the 16th District state Senate race with his supporters at an election party in Petersburg in June.