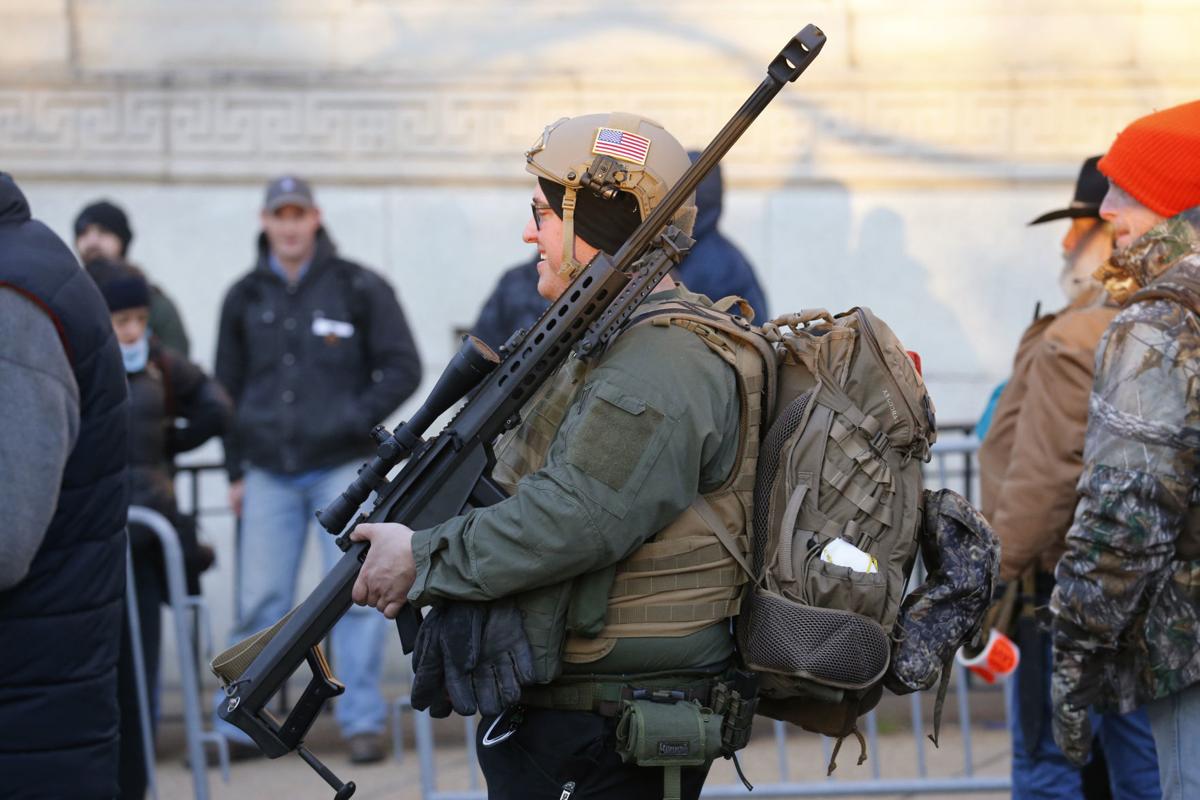 Grayson County, where Richard Vaughan has been sheriff for 13 years, is 60 miles south of West Virginia. When it comes to gun politics, the mountainous Southwest Virginia county and West Virginia are a lot closer.

Vaughan, in a sheriff’s signature, cocoa-colored uniform and Smokey Bear hat, traveled nearly 300 miles to Richmond to join 21,199 other firearms-rights protesters who crowded Capitol Square and surrounding streets this week to loudly vent in an argument with the new Democratic majority over new gun restrictions that they are almost certain to lose.

As Vaughan sees it, rural western Virginia has an option: Secede, becoming part of similarly firearms-friendly, Trump-centric West Virginia, formed in 1861 from 39 Virginia counties that resented an earlier burst of statehouse highhandedness — the pro-slavery absolutism of eastern counties ruled by the cavalier class.

“They broke away because of ... overreaching government,” said Vaughan, referring to the sectional trauma that — by God — birthed West Virginia. “It seems to be very similar today. Just because there was a low turnout in the election doesn’t mean Democrats have the right to impose this.”

Notwithstanding an invitation to join West Virginia — symbolic legislation inspired by the Democratic take-back in Virginia is pending in Charleston — Grayson and other pro-gun localities aren’t going anywhere, auguring continued east-west tensions, this time, between the countryside that used to control Virginia and the cities and suburbs that now command it.

The consequences are considerable for a Republican Party already in retreat because of its rigid resistance to gun control but mostly its embrace of President Donald Trump, who tweeted his support for firearms ahead of the rally. The party’s contraction was in plain view downtown Monday.

The majority of protesters — some openly armed — were older white males. This is the ilk that ran Virginia from its founding in the early 1600s. It began losing power between the 1860s to the 1960s, a century during which women and African Americans got the vote, ultimately becoming defining, if not deciding, forces in state politics.

And they are fueling the Democratic ascendancy. In the 2017 election for governor, men made up a slight majority of the electorate. Half of male voters broke Republican, but nearly two-thirds of women went Democratic, according to exit polling by The Washington Post. That ensured the party’s second consecutive statewide sweep.

In 2019, their continuing anger over Trump paired with outrage over GOP inaction after the Virginia Beach mass slaying, women voters again flexed their muscle, helping return control of the General Assembly to Democrats and reminding Republicans that white guys alone do not a party make.

Successful female Republican candidates for the Senate — Siobhan Dunnavant was re-elected in Henrico County and Jen Kiggans was elected in Virginia Beach — prevailed in blue-trending regions last November because they were packaged as problem-solvers rather than partisans.

Dunnavant affirmed that last week — and perhaps positioned herself for statewide candidacy in 2021 — with a modest bow to gun control, voting to require background checks for the purchase of most firearms.

Though that’s a betrayal among Republicans, for whom gun rights has been a non-negotiable demand since George Allen was elected governor in 1993 — running against a proposed assault-weapons ban — it may allow Dunnavant, head of the new campaign arm of the Senate GOP caucus, to do what primary-fearing Republicans cannot: begin changing the subject from issues on which the GOP is stranded.

That includes abortion, another theme underscored by some in the gun-rights throng. And Confederate heritage, which — despite the strenuous objections of its devotees — is widely seen as a none-too-subtle appeal to white supremacy, the reassertion of such in the late 1800s and early 1900s drove Virginia to erect more rebel statues than all but one Southern state, Georgia.

And Trump, himself, whose clipboard-carrying volunteers milled about, harvesting the names of volunteers for the president’s Virginia campaign, which a recent poll suggested may not be for naught if Democrats pick a nominee well left of Joe Biden.

Still, the middle, where many Virginians are, is largely off-limits to Republicans, who emerged in the late 1960s as a counterweight to the segregationist Democratic oligarchy that lorded over the state nearly 80 years. The GOP’s message: investments in schools and transportation, racial reconciliation, economic expansion — concerns then shaping the fast-growing suburban vote troves.

Even if it wasn’t half what organizers expected.

PHOTOS: Scenes from the gun-rights rally at Capitol Square in Richmond