Shooting for the moon, VCU joins state higher education push in cybersecurity
0 Comments
Share this
1 of 5 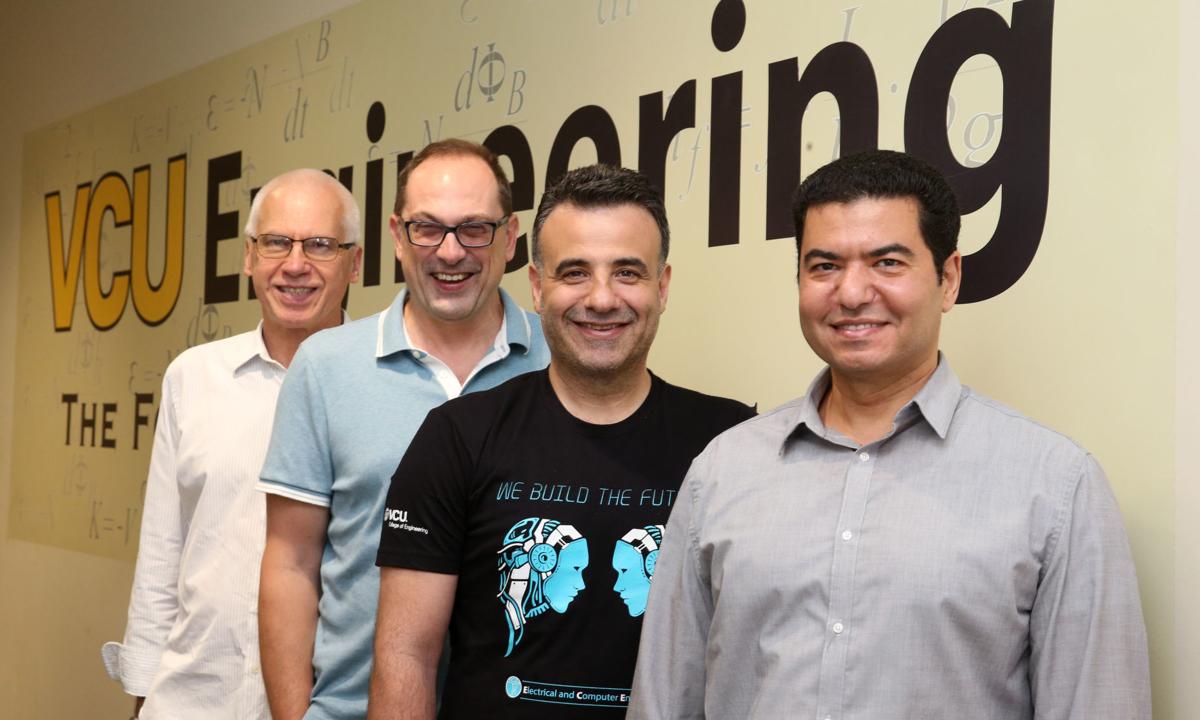 Erdem Topsakal (third from left), chair of Electrical and Computer Engineering at VCU, will oversee the regional effort to create a startup plan and budget, His colleagues shown in this 2018 photo include ECE professor Sherif Abdelwahed (right) and computer science professors Krys Cios (left) and Milos Manic. 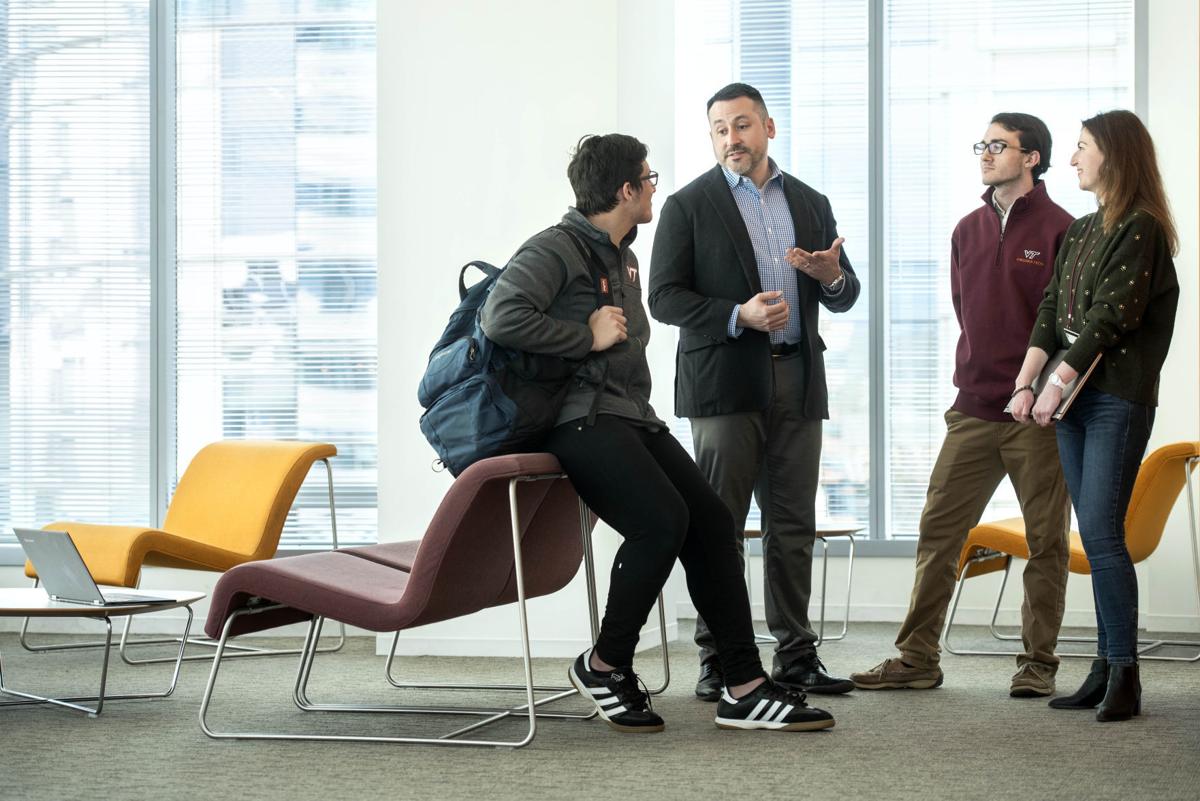 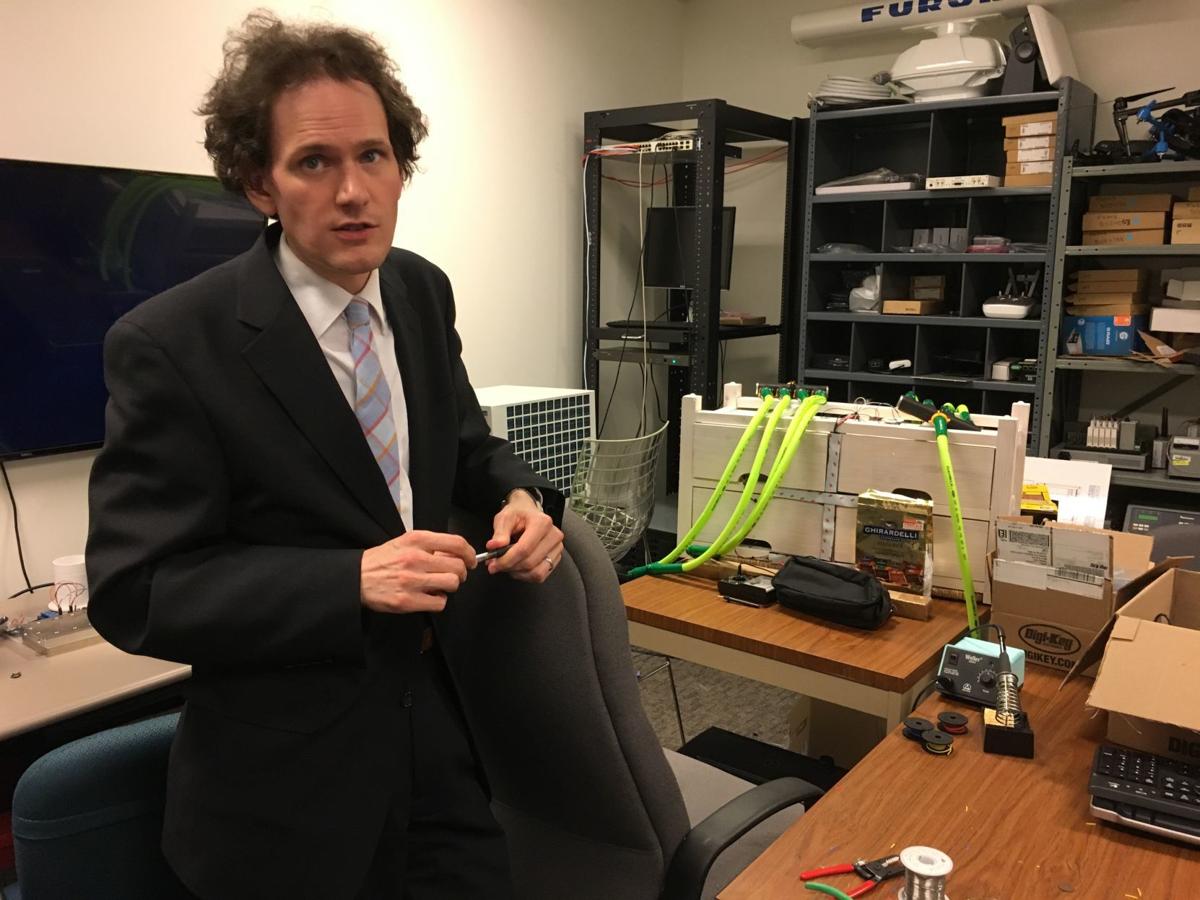 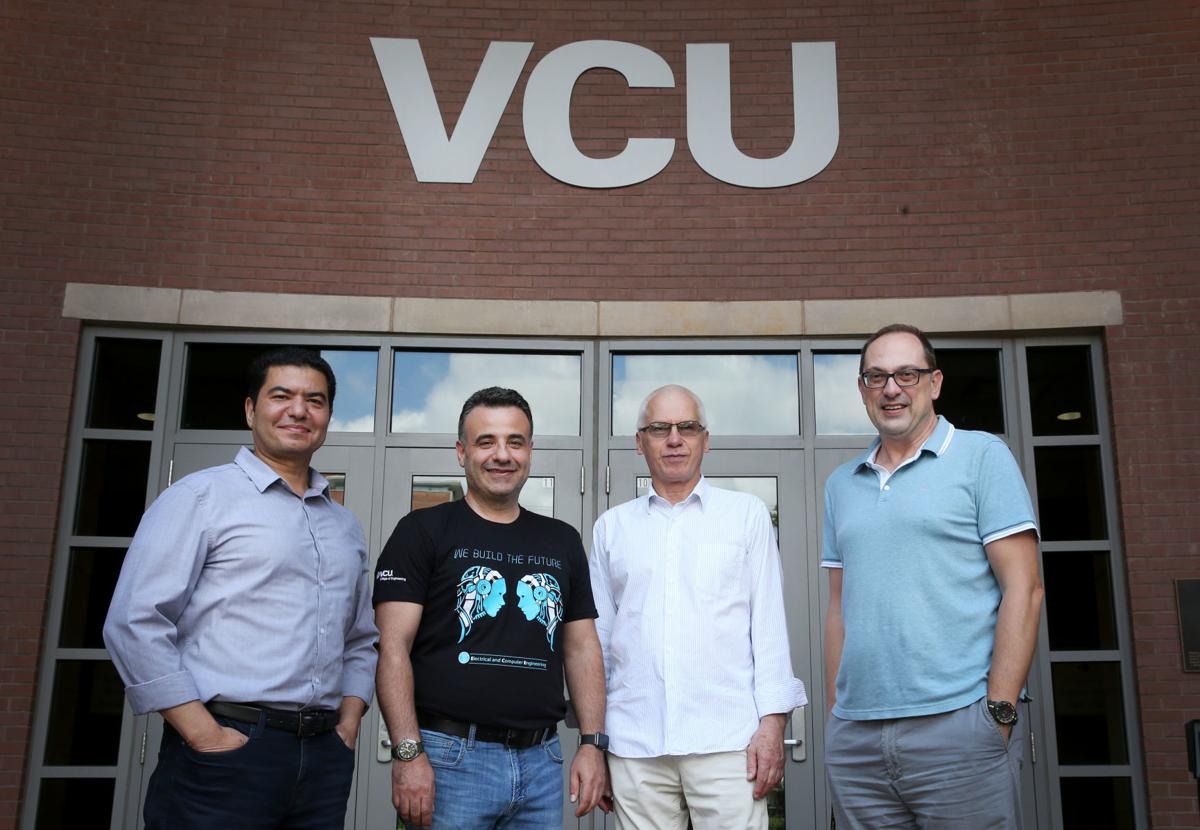 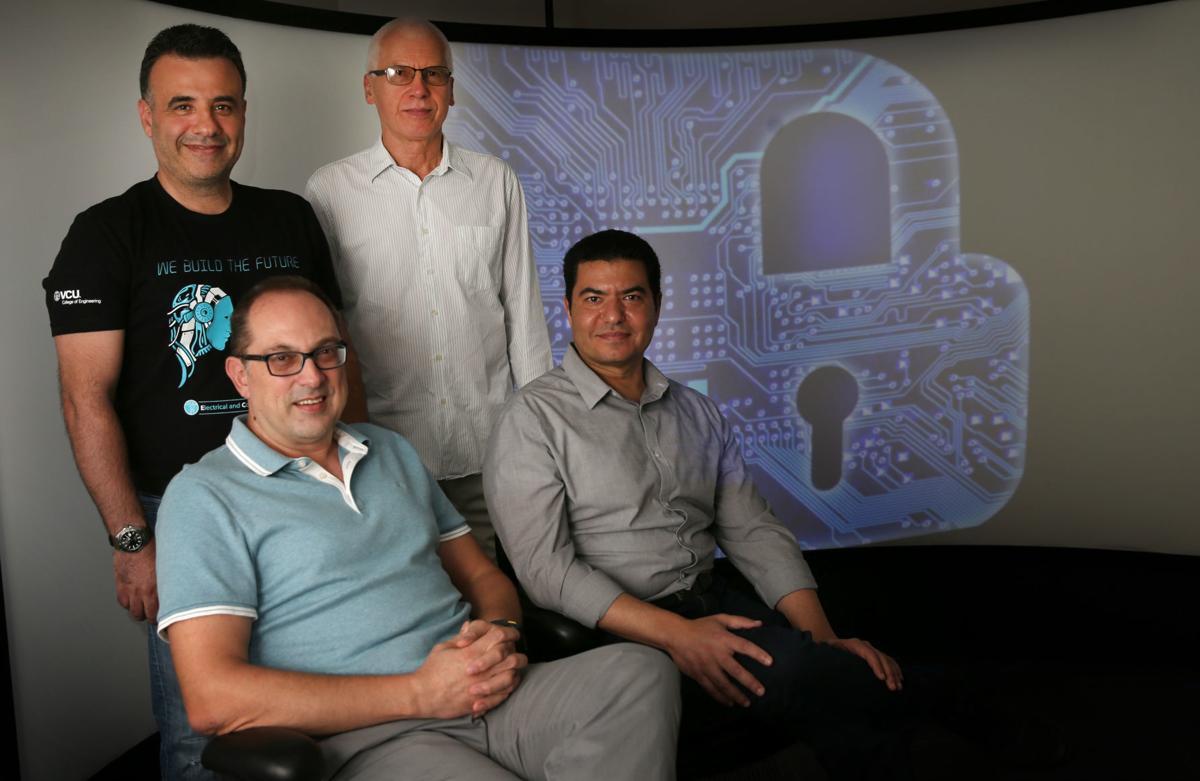 ARLINGTON — Virginia Tech was leading a discussion about potential partners in the “hub and spoke” system of a new state initiative to spark collaborative research in cybersecurity and other advanced technologies that policymakers see as Virginia’s economic future.

“Don’t forget the state capital!” cried a voice from the audio system through which several members of the Commonwealth Cyber Initiative’s executive committee participated in the panel’s inaugural meeting here in late August.

The Richmond reminder came from Erdem Topsakal, chairman of the Department of Electrical and Computer Engineering at Virginia Commonwealth University.

Topsakal was one of two members added to the fledgling executive committee as Virginia Tech has moved to reassure a panel overseeing the budgeted $25 million state investment that higher education institutions across Virginia will be part of the blueprint for the initiative known as CyberX.

VCU hopes to be one of the spokes connected to the research and educational hub that Virginia Tech is preparing to create next year in Northern Virginia. The region already is the epicenter of high-tech industry in the state and the potential home of HQ2, the new $5 billion headquarters that Amazon has been looking for the past year to build somewhere in North America.

“I’m willing to do whatever I can do to make this thing happen,” Topsakal told executive committee members gathered Aug. 28 at Tech’s Northern Virginia campus of the Hume Center for National Security and Technology.

The university also has a growing presence in Northern Virginia, with seven different operations — in Alexandria (two), Fairfax, Falls Church, Leesburg, Manassas and Arlington, which constitutes about 30 percent of the Hume Center’s two-campus operation.

Tech has the financial heft to guide an initiative that will require partners to ante matching funds to hire “eminent scholars” to dual-faculty positions between the CyberX hub and their home campuses. The university also played a part in then-Gov. Terry McAuliffe’s quick-strike effort last fall to raise money to hire consultants to shape Virginia’s three-region response to Amazon’s HQ2 sweepstakes.

“I felt Tech was a logical choice, after working with them on the Amazon proposal,” said House Appropriations Chairman Chris Jones, R-Suffolk.

Jones is considered the father of the CyberX initiative, which first emerged publicly in the proposed budget the House of Delegates adopted in February. It grew from a dinner meeting he held last winter with Virginia Tech President Tim Sands and Appropriations Staff Director Robert Vaughn.

Sands said the chairman told him, “‘We need to do a cyber moon shot.’”

They tasked the president to produce a proposal — by the next morning — for a statewide initiative that would involve collaboration among research universities to produce commercially viable research and educate students at all levels in advanced technologies.

“It was almost an all-nighter,” Sands recalled in a recent interview.

Jones said his interest grew from his role as a member of the Major Employment and Investment Project Approval Commission, known as MEI.

The commission includes high-ranking legislators and administrative officials. They confidentially review economic development prospects that require major state incentives to attract them to move to Virginia or expand operations here.

“I felt strongly we need a more coordinated, targeted effort between our universities and private sector to be successful in growing our economy,” he said.

The opportunities became more apparent with the announcement by Micron Technology Inc. that it would invest $3 billion and create more than 1,100 jobs in an expansion of its memory chip operation in Manassas. The company’s commitments were part of a 15-year agreement and incentive package that includes a record $70 million state performance grant.

The MEI commission hasn’t disclosed what the state is offering Amazon to choose among three sites proposed in Northern Virginia for the retail giant’s second headquarters.

However, state officials have made clear they won’t enter a bidding war with Maryland and other states still in the running for the project, but will rely in large part on indirect incentives such as investments in education and transportation networks that the Seattle-based company values.

CyberX fits into the state strategy because it goes to the heart of what Amazon and other high-tech companies need — skilled talent to fill the high-paying jobs of the future.

“The single biggest determinant of Virginia’s growth rate over the next decade will be how well we work to address our tech talent pipeline issues,” said Stephen Moret, president and CEO of the Virginia Economic Development Partnership.

That’s why Sands proposed to make the initiative big — ultimately a $100 million investment in state, institutional and industry contributions.

Virginia has an immediate challenge in producing skilled workers to fill jobs in cybersecurity, an industry naturally rooted in the Washington, D.C., suburbs because of the needs of federal defense and intelligence agencies.

“We’ve got to have a starting point with a real number, and there’s got to be milestones,” said John O. “Dubby” Wynne, a retired Hampton Roads executive who serves as chairman of GO Virginia and as a member of the Virginia Research Investment Committee, which is overseeing the CyberX initiative.

Last month, VRIC, as the committee is known, gave Tech officials additional marching orders as they put together a coalition to produce a blueprint for legislators by Dec. 1.

They want business leaders and entrepreneurs involved in an initiative that is expected to turn institutional research into viable commercial technologies that can attract outside capital and big grants to turn them into engines for Virginia’s economy.

“We feel very strongly we have to have a significant amount of private sector involvement,” Jim Dyke, an influential Northern Virginia lawyer and former state education secretary, told fellow members of the executive committee last week.

Dyke, who also serves on VRIC and on the state board of GO Virginia, also said it cannot be an enterprise dominated by Virginia Tech in Blacksburg. The blueprint has to include broad representation by higher education institutions, including community colleges that have developed cybersecurity curricula, he said.

The executive committee needs to “focus on governance, not debate over who’s at the table and who isn’t,” he said.

Sands, in an interview last month, said emphatically, “It’s not an only Virginia Tech thing.”

Soon after VRIC met with Tech officials in mid-August, they added Topsakal and Northern Virginia Community College President Scott Ralls to the executive committee and expanded membership in four phase-one working groups to include nearly 50 people.

“We’re actually a fairly close-knit group,” Crawford said. “This will only be successful if we can collaborate together. We don’t see it as a zero-sum game.”

“I enjoy collaboration,” Gerdes said at a lab where he works on issues related to cyber-physical security and smart technologies. “I view it as essential to making scientific progress.”

The opportunity is huge for Topsakal and his colleagues at VCU, which has already established a cybersecurity center under the direction of Milos Manic, a computer science professor. It is preparing to create the VCU Center for Analytics and Smart Technologies under the direction of Sherif Abdelwahed, a professor of electrical and computer engineering.

Their focus is research on cyber-physical security and the Internet of Things, or the expanding universe of interconnected wireless devices, from phones to medical devices implanted in people’s bodies. They also work on what Topsakal calls “smart cities,” technology to improve and protect traffic control systems, water and wastewater, and the other networks that make modern communities work.

“How it relates to [CyberX] is going to be the sales pitch,” he said. “I think the timing is right.”

The odds appear good that VCU will play a big role in the initiative.

Sands received an early expression of interest from his counterpart, VCU President Michael Rao, whom he said “expressed the intent for VCU to be a significant partner in this.”

“VCU has a growing engineering program,” Sands said. “I think they’re going to be a great partner.”

Erdem Topsakal (third from left), chair of Electrical and Computer Engineering at VCU, will oversee the regional effort to create a startup plan and budget, His colleagues shown in this 2018 photo include ECE professor Sherif Abdelwahed (right) and computer science professors Krys Cios (left) and Milos Manic. 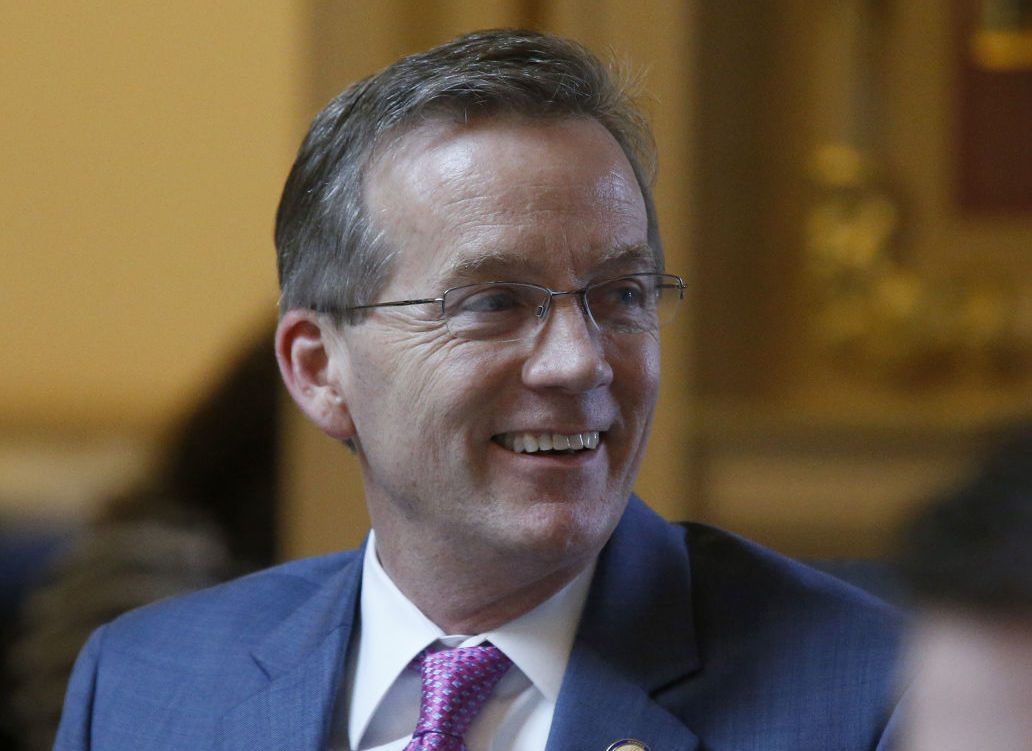 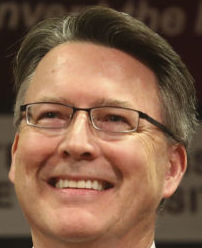