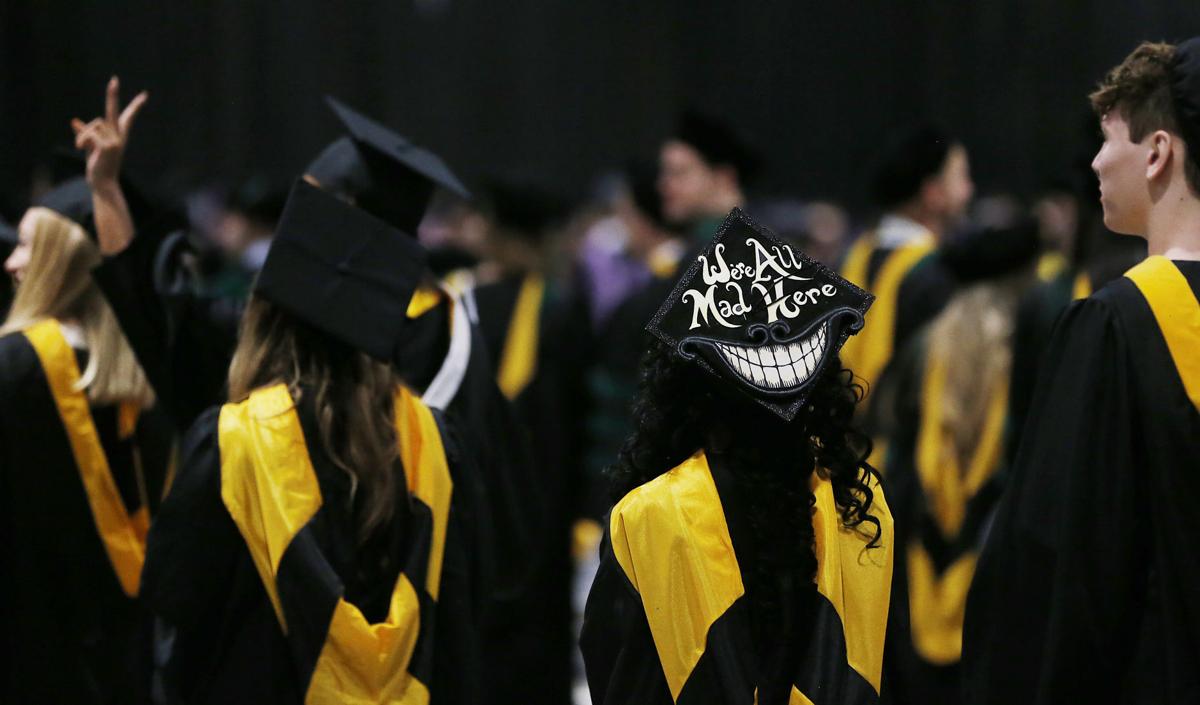 Graduates participated in the processional at Virginia Commonwealth University on May 11. 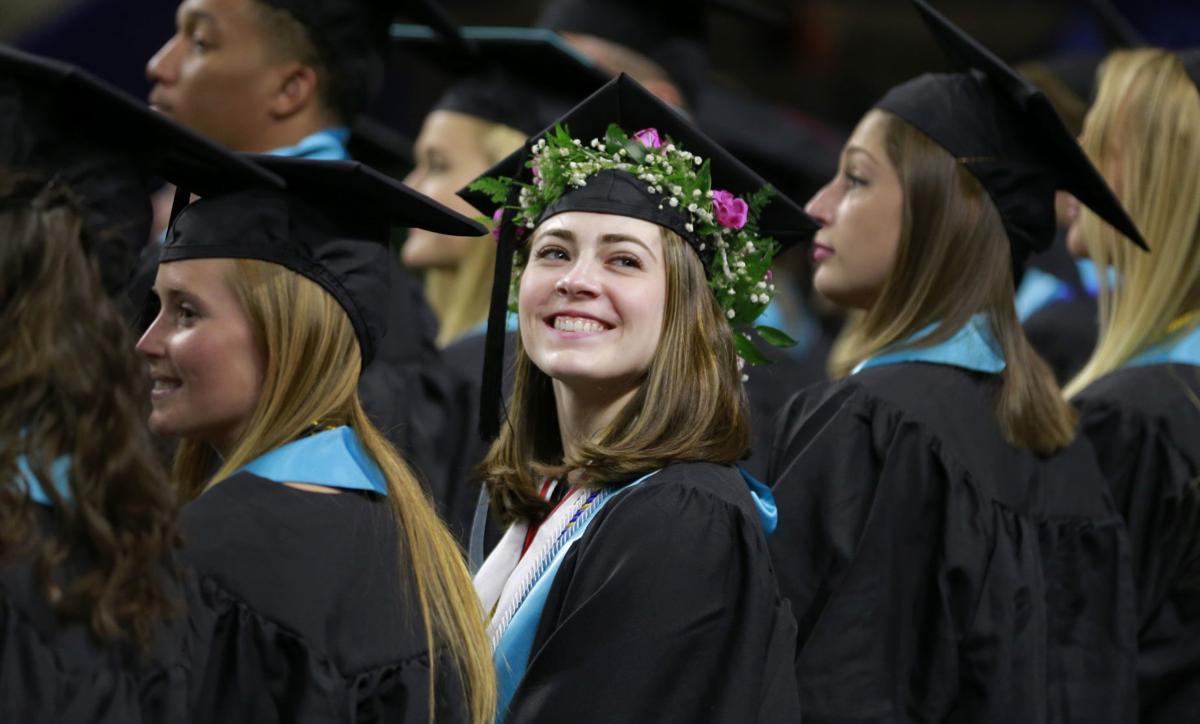 Students at the University of Richmond (top) and VCU will benefit from a tuition freeze for the 2019-20 school year thanks to the state legislature. 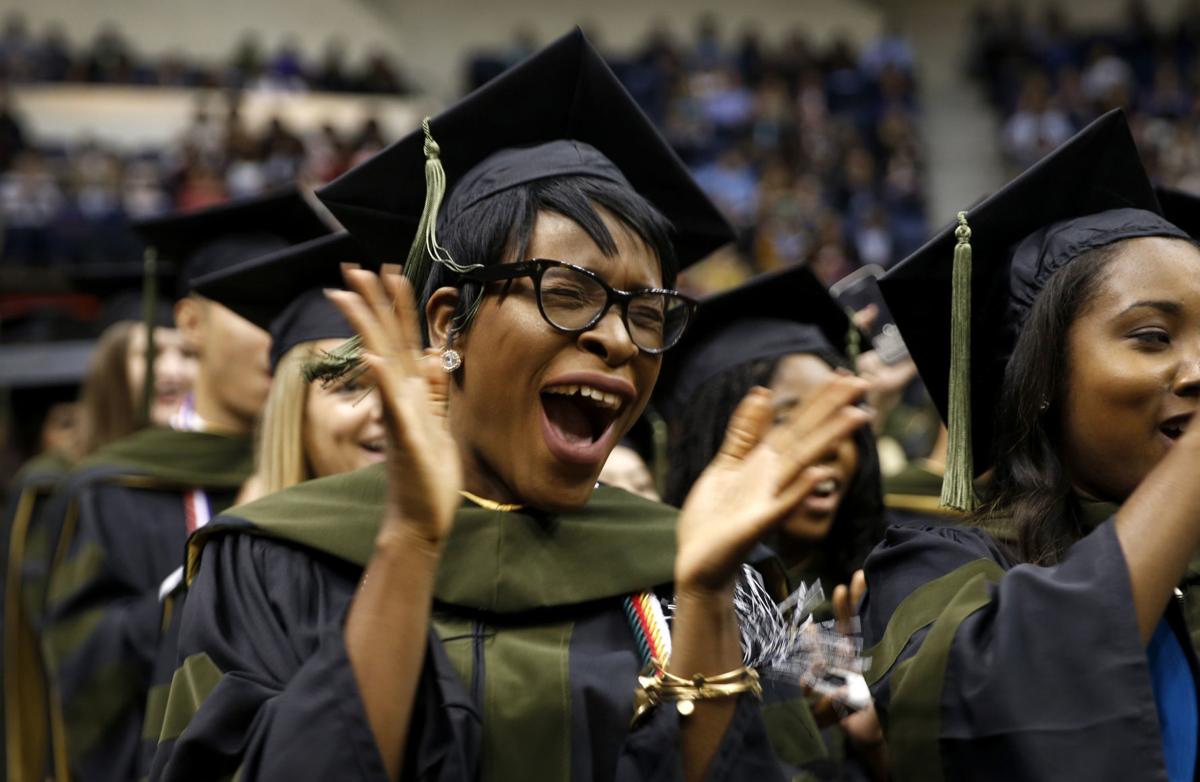 Kathryn Mundi cheers when the doctorates of pharmacy are announced during the VCU commencement ceremony at the Coliseum on Saturday May 13, 2017.

Sancia Celestin got an email in late April she wasn’t expecting.

The provost and chief financial officer at her college, George Mason University, had sent a notification to every student that the administration had recommended a tuition freeze for undergraduate students after state lawmakers approved a budget with money to hold the cost of college steady. Celestin knew it was a big deal.

Along with a friend, the first-generation college student went to the university’s governing board meeting to see the action in person.

“We didn’t think they’d actually do it,” she said.

They did, just like every other college governing board in the state.

For the first time in roughly two decades, tuition is staying flat at every public college in Virginia. Tuition has increased 79 percent at state schools over the past 10 years, a cost driven up by fewer state dollars and the building of facilities that impress prospective students, among other things.

“Virginia students and families are finally going to get a breather,” said James Toscano, the president of Partners for College Affordability and Public Trust, a Washington-based higher education advocacy organization. “This was a really significant year.”

Longwood University became the last school to approve a freeze when its governing board did so last week.

This year, in-state students across Virginia’s public colleges paid an average of 5 percent more in tuition and mandatory fees, according to state data. Tuition has gone up at least 4 percent every year since the Great Recession.

Tuition at every four-year public college in Virginia has increased at least 50 percent since the 2008-09 school year. Students and their families pay 55 percent of the cost, on average, at Virginia’s four-year schools, while the state pays 45 percent.

“This was a high priority for the House,” said Del. Chris Jones, R-Suffolk, the chairman of the House of Delegates Appropriations Committee, which first proposed the tuition freeze this past session.

While no state school has been immune to rising tuition, every one is holding the rate flat next year.

“Affordable access remains a priority for the commonwealth,” said Peter Blake, director of the State Council of Higher Education for Virginia, which oversees the state’s public colleges. “The tuition freeze, combined with increases in financial aid, will give more Virginians the opportunity to get a high-quality education.”

The last time the state froze tuition for in-state undergraduate students was in 2001-02. State lawmakers rolled back tuition by 20 percent in 1999-2000 before freezing it in 2000-01 and 2001-02. The recession that started in 2002 “forced the tuition freeze to be lifted and institutions were allowed to increase tuition in double percentage digits,” a SCHEV spokeswoman said.

Next year’s tuition freeze wasn’t mandatory, despite the General Assembly putting $57.5 million in the budget to cover each school’s projected increase.

“It is a burden on people leaving college so anything that can be done to mitigate that, I’m happy to see happen,” Radford senior Jeremy Moser said about rising tuition.

Said VCU junior finance major Elisa Maurice: “Those who wouldn’t have been able to afford another increase will spend another year on VCU’s campus.”

Jones said he hopes lawmakers can look at freezing tuition again next year.

Graduates participated in the processional at Virginia Commonwealth University on May 11.

Students at the University of Richmond (top) and VCU will benefit from a tuition freeze for the 2019-20 school year thanks to the state legislature.

Kathryn Mundi cheers when the doctorates of pharmacy are announced during the VCU commencement ceremony at the Coliseum on Saturday May 13, 2017.