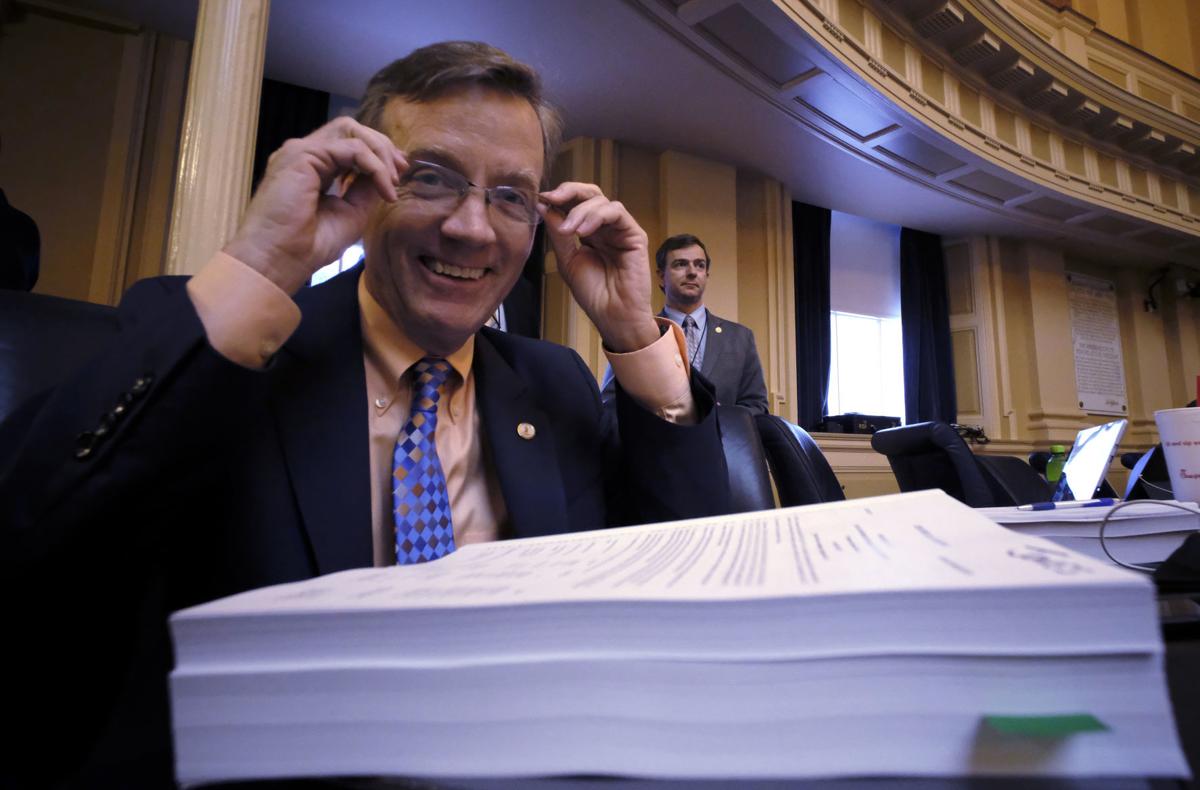 Del. S. Chris Jones, R-Suffolk, chairman of the House Appropriations committee, smiles just before the new Virginia budget passed the House of Delegates, with Medicaid expansion as a provision inside the State Capitol n Richmond, VA Wednesday, May 30, 2018. 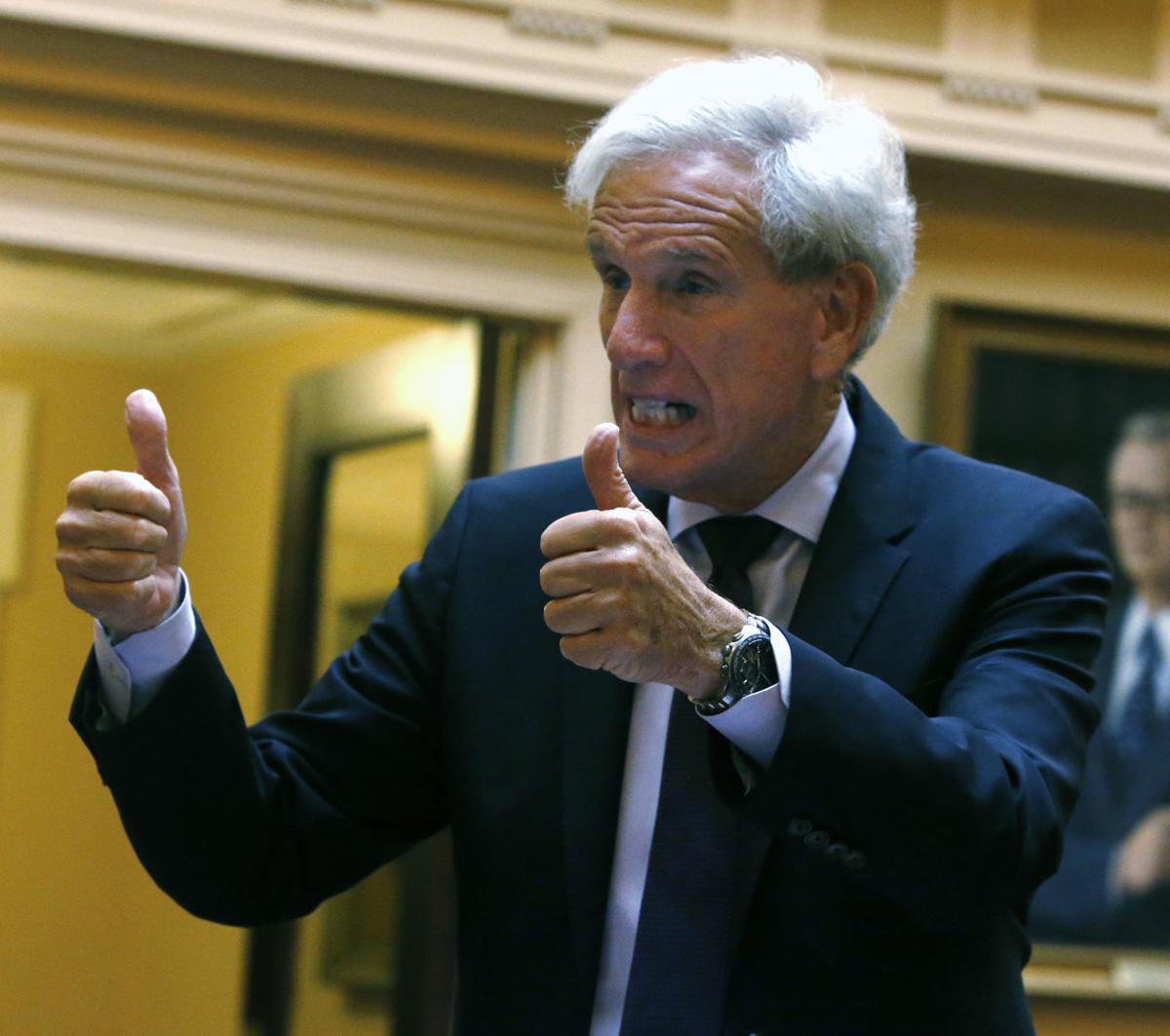 Senate Minority Leader Richard L. Saslaw, D-Fairfax, gives a “thumbs-up” sign to the Democratic members during a vote on the budget during the floor session of the Senate at the State Capitol n Richmond, VA Wednesday, May 30, 2018. 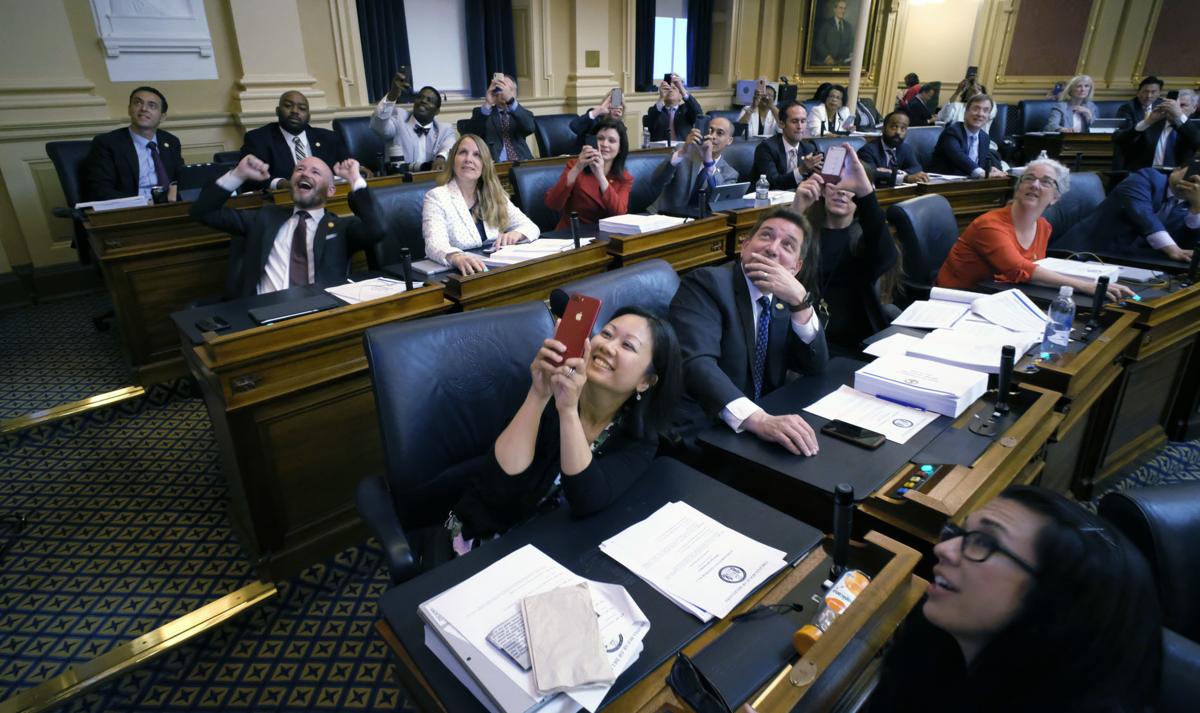 ABOVE: Democratic delegates reacted as they looked at the voting board in the House chamber as the new Virginia budget passed on Wednesday. BELOW: Senate Minority Leader Dick Saslaw, D-Fairfax, gave a thumbs-up during a budget vote. 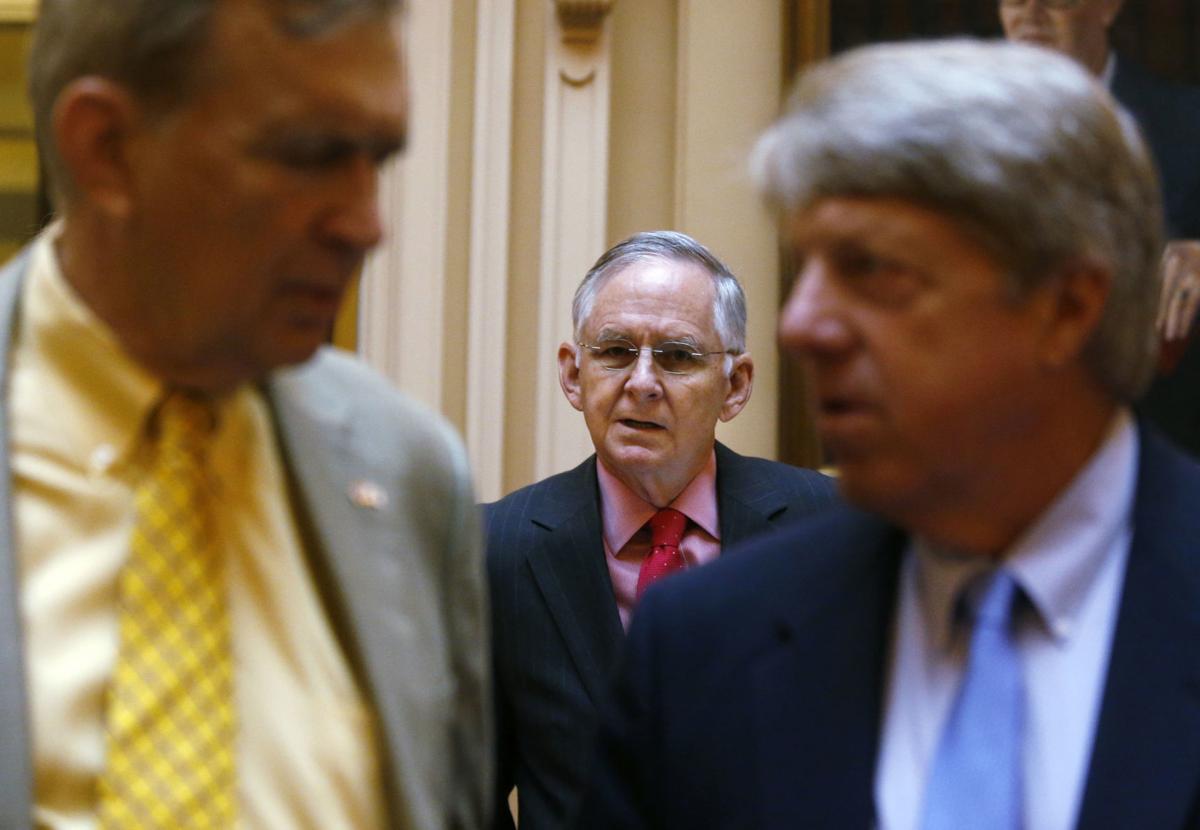 Six years after the U.S. Supreme Court left the decision to states on whether to expand their Medicaid programs under the Affordable Care Act, Virginia is about to extend health care coverage to hundreds of thousands of Virginians without it.

Gov. Ralph Northam has left no doubt he will sign a pair of budget bills that will begin a two-phased process of receiving federal approval to expand Medicaid in Virginia on Jan. 1, relying on billions of dollars in long-available federal funds and a pair of taxes on hospital revenues to pay for it.

The decisive vote came in the Senate just after 7 p.m. on Wednesday, when a bitterly divided chamber voted 23-17 to adopt a two-year budget that includes Medicaid expansion. Earlier in a grueling six-hour debate, the Senate adopted a revised budget for the current fiscal year that ends June 30, by the same margin, that directs the state to move forward on expansion.

A little more than an hour later, the House of Delegates adopted identical budget bills embodying a compromise negotiated by House Appropriations Chairman Chris Jones, R-Suffolk, and Senate Finance Co-Chairman Emmett Hanger, R-Augusta, to resolve an impasse that had left Virginia without a budget for the next biennium when the General Assembly adjourned its regular session on March 10.

The victory was especially hard-fought for Hanger, a moderate Republican from the Shenandoah Valley who had been thwarted by fellow Republicans from expanding health coverage in 2014. This year, he had to overcome fierce opposition from Senate Republicans led by Majority Leader Tommy Norment, R-James City, who bitterly denounced the outcome and the backdoor negotiations with the House that produced it as “a degradation of the customs, usage and traditions of the Senate.”

Norment issued a statement saying the legislature had approved a budget “that abandons Virginia’s long-standing reputation for fiscal responsibility” and “marks a stark departure, both from the conservative fiscal policies observed by the commonwealth for generations and in the manner in which it was approved by the General Assembly.”

Hanger called Norment’s remarks “unfounded,” and Sen. Janet Howell, D-Fairfax, said the budget deal was necessary after the legislature failed to adopt a budget in March and the Senate Finance Committee didn’t propose its own amendments until seven weeks after the assembly convened in special session.

“Something had to happen,” Howell said. “You can’t just stand around and wait until we go over the cliff.”

In the end, three other Republican senators — Frank Wagner of Virginia Beach, Ben Chafin of Russell County and Jill Vogel of Fauquier County — joined Hanger and the Senate’s 19 Democrats in adopting the pair of budget bills to end a standoff that has been watched closely by national bond-rating agencies and institutional investors who hold the state’s AAA-rated bonds.

“We should be in much better position with our bond-rating agencies now,” Hanger said after the vote.

While Norment and other Republican opponents denounced the budget bills as anything but conservative, Wagner defended his decision to vote for them as a way to gain concessions that would allow the state to seek federal waivers that would impose work and other requirements on Medicaid recipients and fashion ways to lower commercial insurance premiums for middle-class Virginians.

“It’s a helluva lot more conservative than it was initially,” Wagner said after the vote.

Cox said the budget “includes what I consider the most conservative set of reforms to Medicaid in the nation as part of a plan to expand health care coverage to working Virginians,” but Senate Republican opponents scoffed at the proposed work requirement and other reforms, while predicting future tax increases to pay for the expanded health care entitlement.

“In the 17 years I’ve been here, this is the one budget that scares me to death,” said Sen. Bill Carrico, R-Grayson.

His seatmate, Sen. Bill Stanley, R-Franklin County, denounced the budget as “a ticking time bomb” and a “$1.2 billion bailout to our hospitals.” Private hospitals would receive an estimated net benefit of about $880 million over the next two years from a pair of provider assessments that raise money for the state’s share of expansion and an increase in reimbursement rates for treating Medicaid patients.

Stanley also contended the state would not be able to reverse course and take back benefits for new recipients if the federal government reduces its share of the funding. “Once you ring this bell, you cannot unring this bell,” he said.

But Chafin and Vogel defended their decisions as necessary to invest in core public services, while expanding health coverage to people who need it and the hospitals that provide it.

“I came to the conclusion that ‘no’ just wasn’t an answer anymore,” he said.

Like Chafin, Vogel said she has opposed Medicaid expansion in the past, but supports the budget proposal because of the reforms it includes, as well as funding for her priorities.

“There’s a lot more in this budget than just Medicaid expansion,” she said.

For Democrats, victory was sweet after years of disappointments. “I can’t say enough good things about Emmett Hanger,” Minority Leader Dick Saslaw, D-Fairfax, said at a news conference of Democrats who applauded and replied, “Yes!”

“And also, Frank Wagner. It took a lot of guts,” Saslaw said.

Before the Senate could act on the budget bills that Hanger negotiated with Jones and Northam, the Senate first had to reject a package of amendments proposed by Norment and adopted in a tense Finance Committee meeting on Tuesday. The package embodied the budgets the Senate had adopted in February without Medicaid expansion or hospital assessments, with additional money from higher tax collections and spending on pay increases for public employees.

The Senate voted 22-18 to reject the committee amendments, with Vogel supporting them.

Hanger then fought off a series of amendments proposed to his substitute bills, including two by Sen. Steve Newman, R-Bedford, to the budget for the current fiscal year in an attempt to require approval of the federal waiver before the program could expand and to make the proposed work requirement more stringent.

The Senate then considered and rejected 18 amendments proposed to the biennial budget, including three Newman offered to put in further safeguards in case the federal government reduces state Medicaid funding or the state’s program takes up too much of the state general fund budget.

Hanger blocked each amendment in order to preserve his agreement with the House and governor and avoid amendments that could require a conference committee to reconcile the House and Senate budgets.

In the end, however, the adoption of the budgets without amendments in both chambers cleared the way for quick action by Northam, who told reporters the legislature’s action was “a proud day for Virginia.”

“This is a budget that I really am proud of,” the governor said. “I think it’s good for all Virginians. It’s structurally sound. It expands health care in the commonwealth of Virginia and it protects our triple A bond rating.”

Schapiro: For some Republicans, health care fight not over yet

A troubling fact kept getting in the way of the Senate GOP's slender majority: a division in the ranks.

As votes were still being counted on election night in 2017, then-Virginia Gov. Terry McAuliffe said the blue wave would finally sweep Medicai…

Del. S. Chris Jones, R-Suffolk, chairman of the House Appropriations committee, smiles just before the new Virginia budget passed the House of Delegates, with Medicaid expansion as a provision inside the State Capitol n Richmond, VA Wednesday, May 30, 2018.

Senate Minority Leader Richard L. Saslaw, D-Fairfax, gives a “thumbs-up” sign to the Democratic members during a vote on the budget during the floor session of the Senate at the State Capitol n Richmond, VA Wednesday, May 30, 2018.

ABOVE: Democratic delegates reacted as they looked at the voting board in the House chamber as the new Virginia budget passed on Wednesday. BELOW: Senate Minority Leader Dick Saslaw, D-Fairfax, gave a thumbs-up during a budget vote. 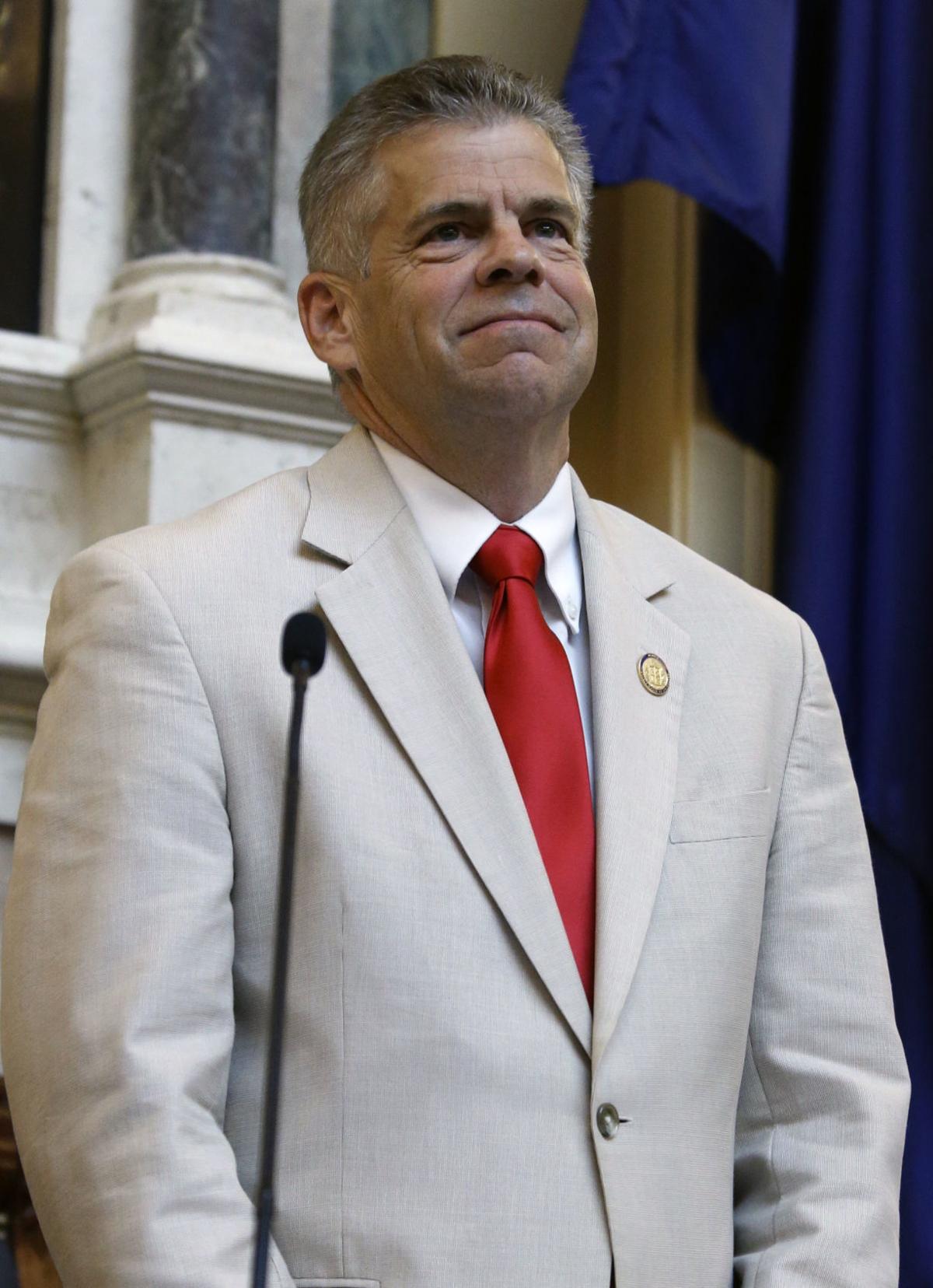