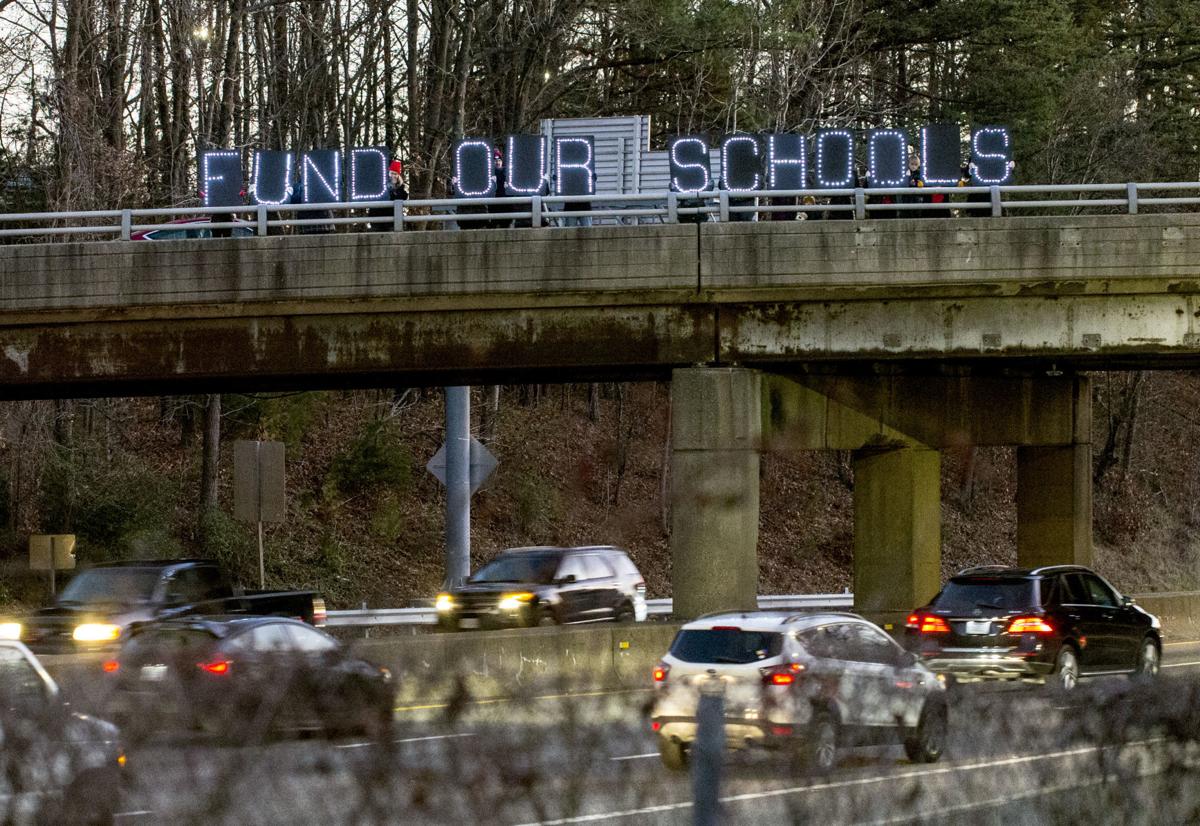 Education advocates held signs that read “Fund our schools” on the Bellevue Avenue overpass above Interstate 95 in Richmond on Wednesday. 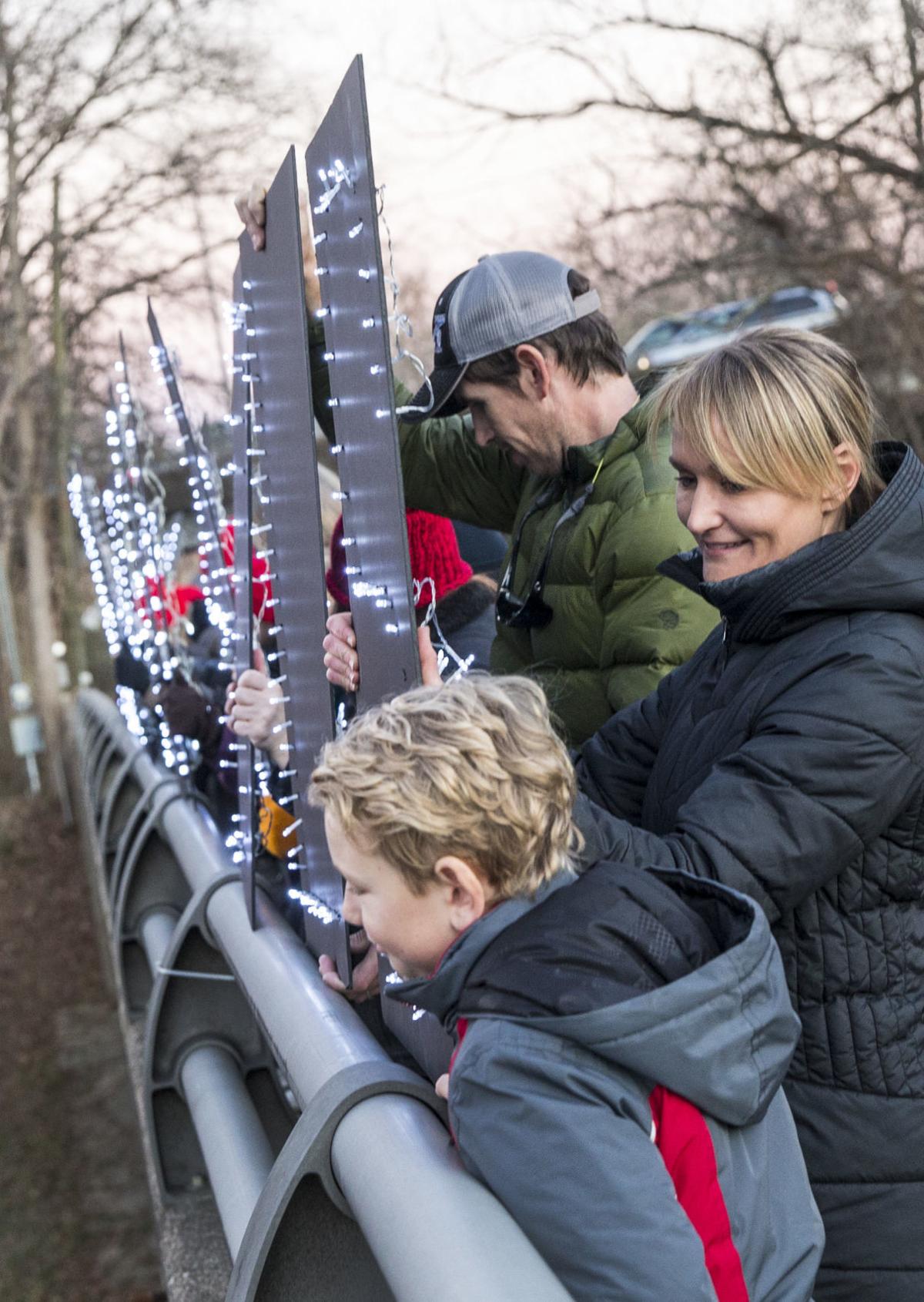 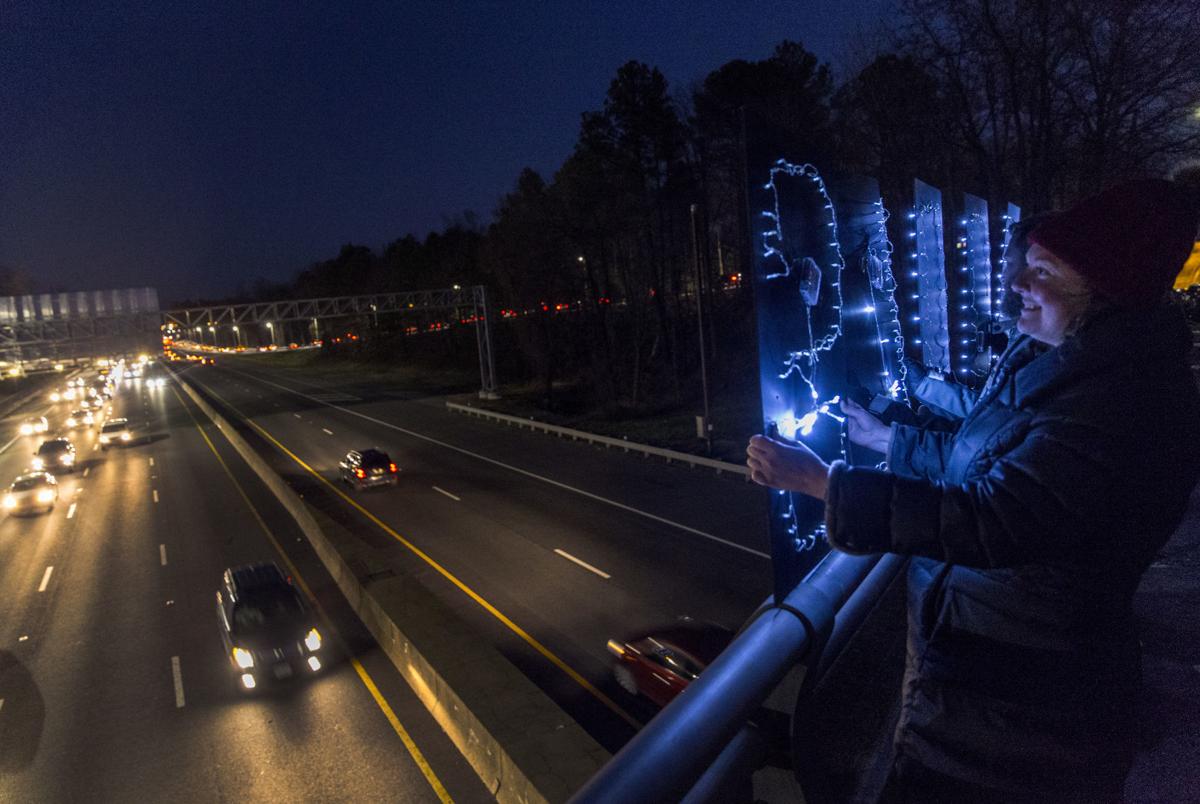 Katie Euting, right, a teacher of Linwood Holton Elementary School in Richmond, other teachers and supporters hold lighted signs, “FUND OUR SCHOOLS,” on the overpass of Bellevue Avenue to be seen from Interstate 95 in Richmond on Wednesday, Jan. 8, 2020.

Keri Treadway has a routine.

Before any students enter her kindergarten classroom in Richmond in the morning, Treadway sweeps up the pieces of plaster that have fallen onto the floor from the ceiling of a building that opened in 1911.

In the fall and spring, she empties the dehumidifier multiple times in an effort to control the humidity levels in a classroom that can reach 90 degrees. No matter the season, the veteran teacher — who is paid below the national average like most other Virginia teachers — keeps Clorox wipes nearby, ready to clean up any mouse droppings that may have been left overnight.

“As educators, we do our best to meet the needs of our students, despite the many obstacles we face,” said Treadway, who teaches at William Fox Elementary, one of the highest-performing schools in Richmond. “We do our best to deal with the challenges of working in an environment that fails to provide adequate resources.”

As a new General Assembly session begins with Democrats in control of the House of Delegates, the state Senate and the governor’s office, educators in Virginia again are calling for more money to be poured into classrooms.

Gov. Ralph Northam has proposed $1.2 billion in new education spending, but all but $400 million of the plan is for technical changes. Educators want more.

Students in the state perform above national averages, but their achievement on major tests is falling. School facilities across the state are old and crumbling. Disparities exist between students living in poverty and those from affluent families.

Yet funding for schools, when adjusted for inflation, hasn’t caught up to what it was before the Great Recession.

The state legislature is set to take up a series of proposals aimed at addressing these issues, including one prescribed by the state’s education governing board that says an influx of money and support is needed, especially to keep teachers like Treadway in the classroom.

Here’s what to know about the proposals:

For the past 35 years, the Virginia Board of Education has made recommendations to the state over what schools need to properly educate students.

This year, the board went further, prescribing changes it thinks the state needs to make to close achievement gaps and to make sure students have experienced and effective teachers.

The result was a proposal, unanimously approved by the board of gubernatorial appointees, that calls for more reading specialists, smaller class sizes and more money for schools serving students from low-income families.

The proposal also calls for a teacher-leader and teacher-mentor program, mentorship for principals and the reaffirmation of a previous recommendation that there should be one full-time school counselor for every 250 students in school.

“Teachers matter,” said Board of Education President Dan Gecker. “Putting effective teachers in front of our children who are most in need is important.”

While there’s widespread support on the policy, the price tag of the changes has raised eyebrows.

The changes would cost roughly $600 million per year, according to the letter the board sent to Northam and legislators after it approved the new standards in November. That doesn’t include an estimated $406.4 million to roll back a state-imposed limit on school support positions, such as social workers, custodians and psychologists.

That cap was implemented during the economic downturn of 2007-09, when budgets in different areas of state government, including education, were cut. Funding hasn’t recovered.

State spending per student is down 8% compared with before the Great Recession, according to the Commonwealth Institute for Fiscal Analysis, a Richmond-based research organization. An average of $5,749 is spent on every student by the state, compared with $6,225 in the 2008-09 school year, after adjusting for inflation.

“The steps we believe we need to take in order to improve educational outcomes cost money,” Gecker said. “Those steps largely are how to redirect more experienced teachers to areas that need them more than where they are today.”

He added: “We’ve tried to increase resources before, but we have not yet tried to direct those resources toward very specific actions.”

While the Board of Education is asking for changes to how money is distributed and to programs funded by the state, lawmakers are looking at an even larger bill for technical changes.

What was initially a roughly $600 million update for the next two years has climbed to more than $800 million, lawmakers learned in November.

Every other year, the state is required to “rebenchmark” its budget, which entails updating the number of students enrolled in state schools, the cost of inflation and the percentage of students qualifying for free meals, among other things.

Take an update to the number of English Learner students, for example. Virginia has seen a drastic climb in the number of students learning English over the past 10 years, rising from 64,261 in 2009-10 to 116,454 this school year.

With that growth expected to continue, state officials say Virginia will need $7.4 million more over the next two years to pay for remedial summer school and English as a Second Language programs.

Aside from education funding for required technical changes, the remaining $400 million in Northam’s proposed two-year budget would fund a 3% teacher raise in the second year of the budget ($145.1 million), $99.3 million for more school counselors, $27.6 million for more teachers with the state’s climbing English Learner population and $10.6 million to help cover the cost of school meals for families who currently qualify for reduced price meals. An additional $125 million is in the budget as flexible money for local districts.

There’s also $140.4 million to increase the “At-Risk Add-On” fund, which gives incentive money to state school divisions — above the normal Standards of Quality — for every low-income student. The governor’s office said it would be the largest single increase to the fund in the state’s history.

“Students deserve quality public schools, no matter where they live,” Northam said last month when announcing his education proposal. “This budget provides extra funding to help close the achievement gap in high-need schools, especially in urban and rural Virginia. Every child should have access to a world-class education, and this budget advances that commitment.”

It does not include money for new school construction or renovations.

The budget has drawn criticism from teachers across the state, notably at public hearings held in early January.

“The governor’s budget proposal for education is a step in the right direction, but unfortunately, it’s not sufficient,” said Caroline County teacher Rachel Levy.

Said Chesterfield County teacher Devyn Keller: “Much of the additional money for K-12 will solely keep up with the rising population and inflation and I fear that it is not enough to create meaningful changes to school systems across the state.”

At one public hearing, Bristol schools chief Keith Perrigan, who oversees a district where all but one school was built before 1968, criticized the lack of money for school facilities improvements.

“I realize that the state is not responsible to repair or replace every school in the commonwealth, but Virginia is ethically obligated to do their share,” he said. “The current budget’s silence on this issue is deafening.”

“Would we like to do more? Absolutely. But we have to live within our means,” he said. “Education will continue to be a top priority for us, but you can’t make up in just one year.”

The governor’s budget increases the money spent on at-risk students, but doesn’t create the “Equity Fund” the Board of Education has said the state needs.

“We’re all very happy to see the amount of dollars being proposed to achieve an equitable outcome for our kids,” Gecker said. “We believe those dollars should be spent slightly differently than how they’re being allocated in the budget.”

Even if the General Assembly signs off on the proposed teacher raise, educators in the state will still be paid below the national average of $59,539.

“We should all find that as unacceptable and continue to work in that direction, but you can’t do all of that in just one year,” Northam said.

The new state budget, once approved, is set to take effect July 1.

A poll released last week found that a majority of Virginians believe public schools are underfunded.

The poll of 818 people, surveyed via phone Dec. 2-13 was conducted by the Center for Public Policy at the L. Douglas Wilder School of Government and Public Affairs at Virginia Commonwealth University. It has a margin of error of plus or minus 4.8 percentage points.

According to the poll results, two-thirds of those surveyed say schools are underfunded while 72% would be willing to pay more in taxes to increase teacher pay.

Education advocates held signs that read “Fund our schools” on the Bellevue Avenue overpass above Interstate 95 in Richmond on Wednesday.

Katie Euting, right, a teacher of Linwood Holton Elementary School in Richmond, other teachers and supporters hold lighted signs, “FUND OUR SCHOOLS,” on the overpass of Bellevue Avenue to be seen from Interstate 95 in Richmond on Wednesday, Jan. 8, 2020.