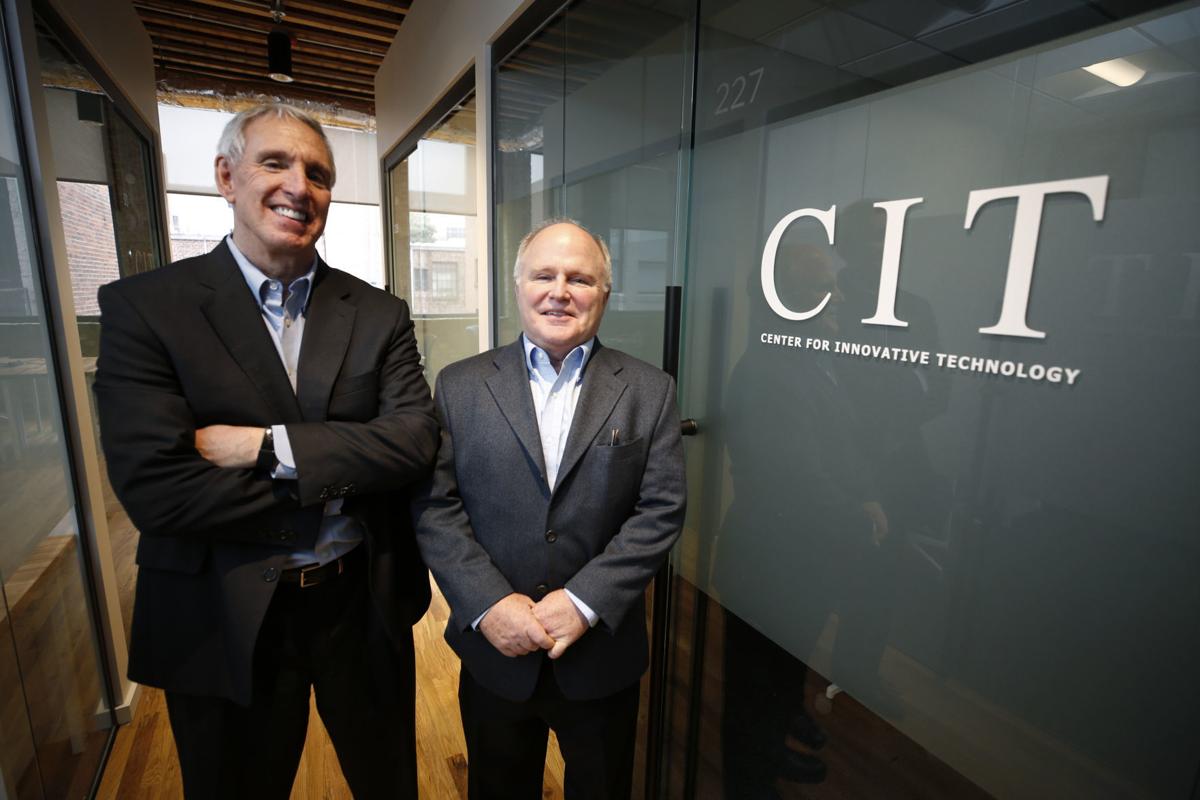 Ed Albrigo (left) is the president and CEO of the Virginia Center for Innovative Technology, and Bob Stolle is the center’s senior vice president for public policy and regional initiatives. 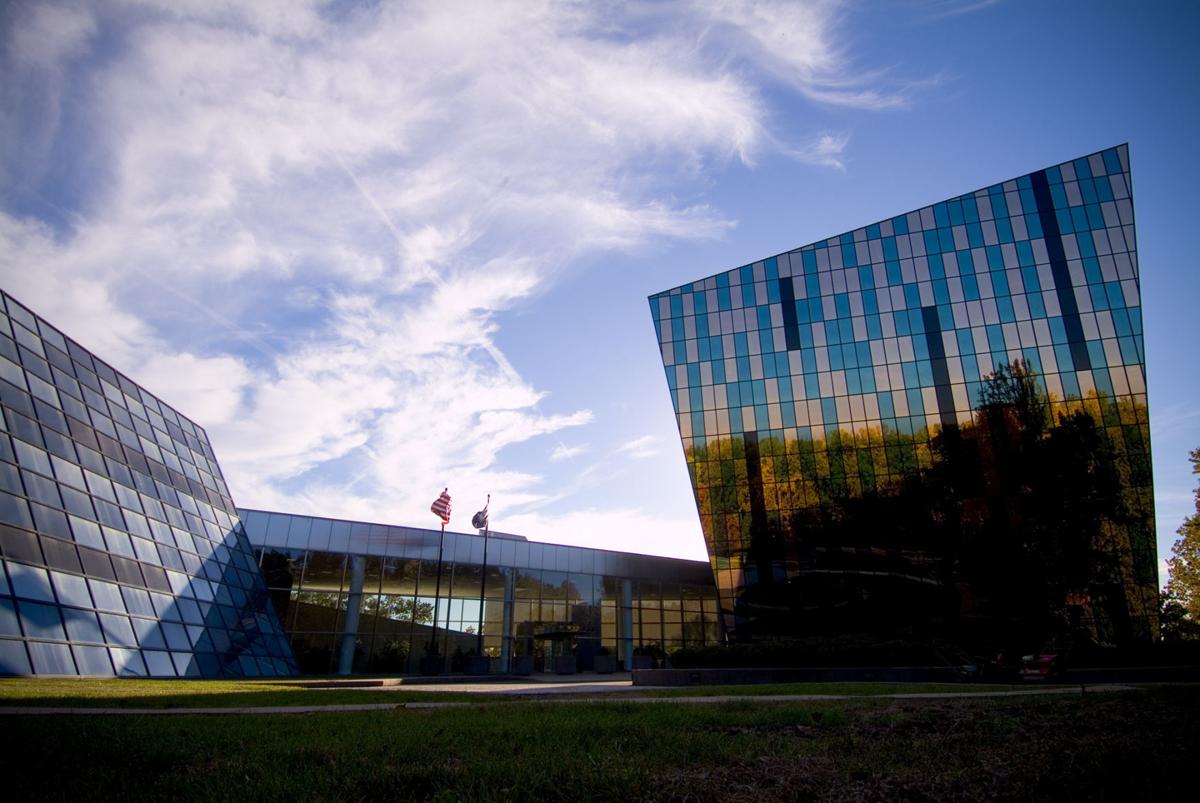 On Thursday, the state sold the 149,000-square-foot Center for Innovative Technology complex in Herndon for $47.35 million.

The irregular glass tower that has long defined the Virginia Center for Innovative Technology has disappeared from the logo for the state enterprise that has been based near Washington Dulles International Airport in Northern Virginia since its creation more than three decades ago.

Soon, the CIT headquarters will be gone, too. Virginia is preparing to sell the 26-acre property along the Dulles Toll Road in Herndon to help finance a proposed state innovation partnership with a mobile presence wherever high-tech research is done and entrepreneurs gather in Virginia.

The proposed state authority will have its headquarters in Richmond, initially in a shared brick loft on East Broad Street that CIT began leasing last year to plant its flag near the seat of Virginia government.

“The notion that you need a big, physical presence, I don’t think that’s our operating mode,” said Ed Albrigo, president and CEO of CIT, in an interview at its new office in the Gather coworking building in Richmond’s Downtown Arts District.

The General Assembly will begin work this week on legislation to create the Virginia Innovation Partnership Authority. The enterprise would encompass the Innovation and Entrepreneurship Investment Authority that governs CIT and the Virginia Research Investment Fund. The fund was created four years ago to fuel higher education research in emerging technologies with strong commercial potential.

It’s a new way for Virginia to promote economic development that moves the state away from reliance on federal spending, especially on defense, and instead cultivate industries with high-paying jobs driven by technology in a state that has become a business magnet for data centers and high-tech giants such as Amazon and Facebook.

The innovation partnership would operate under a proposed $79.1 million annual budget that includes money set aside for existing state-backed enterprises. Those include the Commonwealth Center for Advanced Manufacturing in Prince George County; Virginia Catalyst — formerly the Virginia Biosciences Health Research Corp. — in Richmond; and the Commonwealth Cyber Initiative, which Virginia Tech runs in Arlington County, with higher education research nodes based in Richmond and three other regions.

The new authority also would benefit from the proceeds of the impending sale of the CIT complex that straddles the Fairfax and Loudoun county line next to the coming Innovation Station on Metro’s Silver Line between downtown Washington and Dulles.

The Department of General Services is negotiating the sale with an unidentified buyer for an unspecified price. The money would go into the state research initiative, with $10 million that Gov. Ralph Northam has earmarked for the Commonwealth Development Opportunity Fund to attract economic investment and new jobs.

The impending sale marks a milepost in the journey of CIT from a long association with Northern Virginia’s technology-driven economy to a committed statewide presence for fulfilling its mission, which is why Albrigo decided to drop the silhouette of its distinctive building near Dulles from the organization’s logo.

The legislation to create the partnership has been endorsed by the Northern Virginia Technology Council and political leaders from the region, who were wary of an attempt last year to merge the CIT into a proposed research consortium.

“I’m really excited about the change to a much more statewide operation,” said Sen. Janet Howell, D-Fairfax, who is chairwoman of the Senate Finance and Appropriations Committee and sponsor of the Senate bill to create the new partnership. “Moving to Richmond makes a lot of sense to send that message — and the building is worth a lot of money!”

Money lies at the heart of the proposed authority. It would have separate funds for direct and indirect investments in startup companies, grants to advance commercially promising research, and cultivation of “entrepreneurial ecosystems” to bring together like-minded people who want to start companies based on technological innovation.

“What’s being proposed at the state level will enhance what we’re doing all over the commonwealth,” said Carrie Roth, president and CEO of Activation Capital, which includes the VA Bio+Tech Park in Richmond and subsidiaries that help startup and other companies grow.

The proposed budget for the new authority has raised concerns among higher education institutions in the fledgling cyberinitiative, including Virginia Commonwealth University. The assembly created the initiative with a $20 million budget appropriation in 2018. It signaled last year that it anticipates $20 million in annual funding for the hub in Arlington and regional research nodes in the Richmond area, Hampton Roads, Northern Virginia and Southwest Virginia.

“We are ready to go, so it’s just a momentum killer,” said Erdem Topsakal, chair of the VCU Department of Electrical and Computer Engineering and director of the Central Virginia node for the cyberinitiative.

Topsakal lobbied legislators on Wednesday to restore the money as part of a group that included Virginia Tech, George Mason University and Old Dominion University, the leaders of the four regional research nodes.

“Our message is we don’t need to compete against each other,” he said.

Legislators have asked to restore the money in the budgets that the House and Senate will propose next month for the next two fiscal years, beginning on July 1. The budget amendments were filed by Del. Chris Hurst, D-Montgomery, and Sen. Barbara Favola, D-Arlington, with support from senators from Roanoke, Fairfax and Fauquier County.

“The more money we have to fund the initiative, it will engender more collaboration,” Hurst said.

Secretary of Commerce and Trade Brian Ball, whose office produced the legislation for the new authority, said Thursday that he still supports the governor’s proposed budget for the initiative, known as CCI.

“I am aware of the CCI funding concerns, particularly at the node level, and I expect we will hear more about these concerns,” Ball said in a text message.

The proposed authority would oversee the cyberinitiative, as well as the other centers for excellence financed with separate budget appropriations, but Albrigo said, “CIT is not running these initiatives.”

The new authority would be established on July 1 under the proposed legislation, with CIT as the nonstock corporation that would run its operations. The authority will rename CIT in mid-2021 after a complex transition.

CIT would establish its headquarters in Richmond this year and seek leased space either at its old building or elsewhere in Northern Virginia to maintain a physical presence in the region. The organization already is highly mobile, with employees driving about 114,000 miles across Virginia last year, even though most of its 28-member staff is based in Herndon.

“We don’t need the footprint we have right now,” Albrigo said.

Gather gives CIT additional options. In addition to three coworking spaces in the Richmond area — and a fourth coming in Midlothian next fall — the company operates facilities in Norfolk, Newport News and, beginning in June, Virginia Beach. CIT, as a tenant at the Arts District location, will be able to use other Gather facilities for meetings, offices and support services, such as printing.

“We’ve got space right now, so we’d be happy to grow with them,” said Lindsey Wrable, a community manager at the Arts District location, which has about 21,000 square feet in four former Broad Street storefronts.

Gather also offers what Wrable called a “built-in ecosystem” of startup companies and creative professionals working in the same building as CIT, which leases four offices that could house 12 people, with an adaptable common area the center uses as a conference room.

“It sets a tone if you’re about innovation and entrepreneurship,” Albrigo said. “These are the types of places where it’s occurring.”

CIT has a statewide mission to boost technology entrepreneurs across Virginia, said Bob Stolle, former state secretary of commerce and trade, who is the center’s senior vice president for public policy and regional initiatives. “You’ve got to support these ecosystems in all of Virginia.”

Carrie Roth runs one of them at Activation Capital, so she’s happy to have CIT in Richmond.

“It’s a great place for our capital to showcase what’s going on and also for leveraging the assets across the commonwealth,” she said.

As for CIT’s new look, Roth said, “We all need less space to do big things.”

Ed Albrigo (left) is the president and CEO of the Virginia Center for Innovative Technology, and Bob Stolle is the center’s senior vice president for public policy and regional initiatives.

On Thursday, the state sold the 149,000-square-foot Center for Innovative Technology complex in Herndon for $47.35 million.