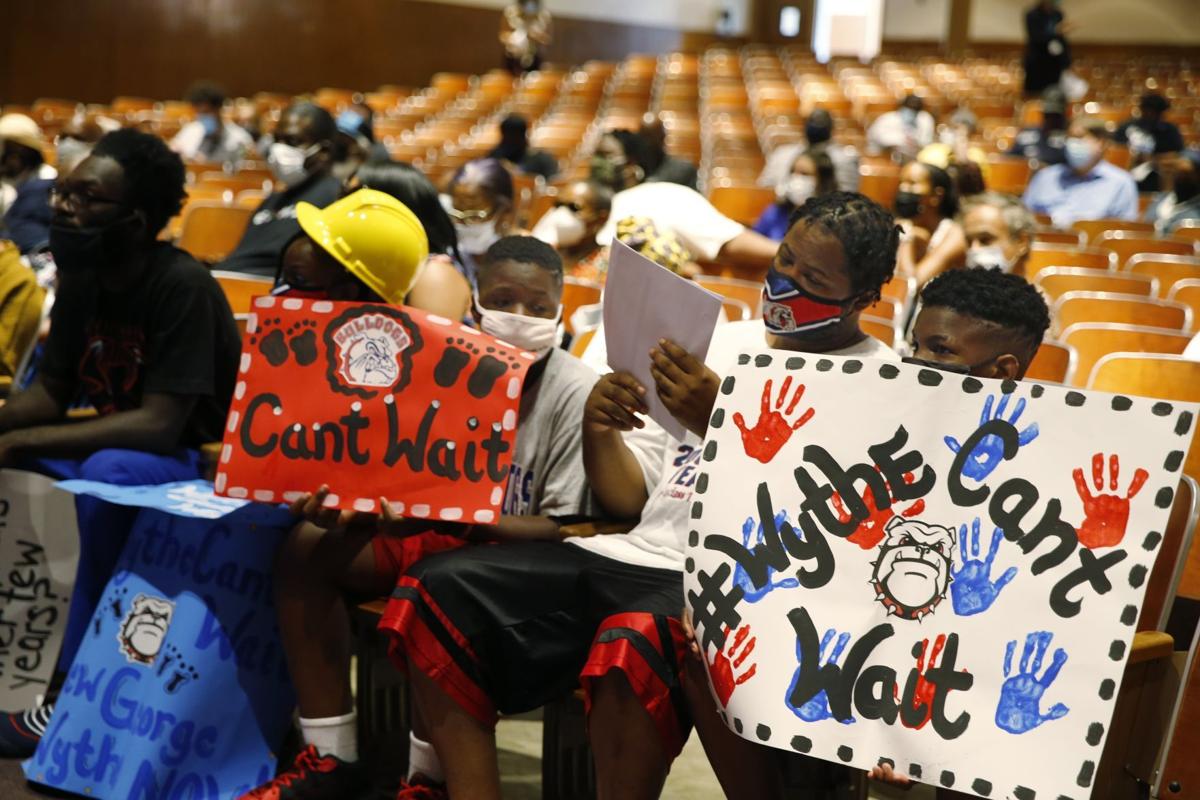 As the Richmond School Board met Tuesday in the George Wythe High School auditorium, Richmond students and families held signs urging the board to build a new school quickly. 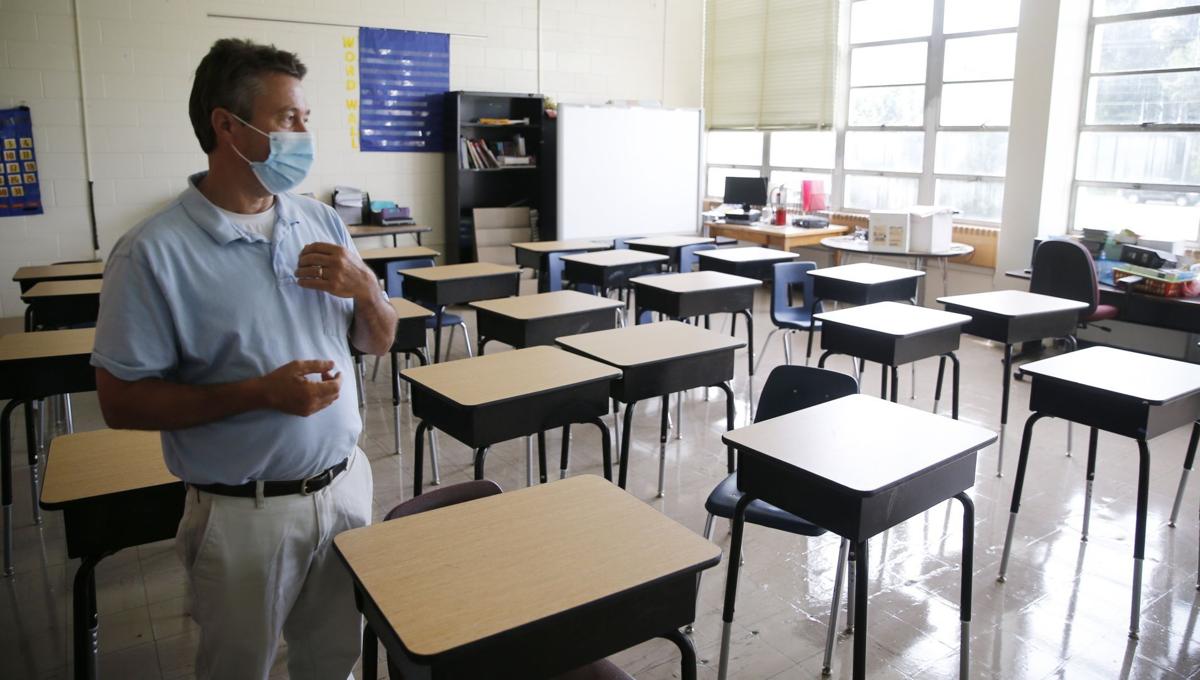 George Wythe high school in Richmond, now into its seventh decade shows signs of its age. Bobby Hathaway. Director of facilities at RPS (left) explains the myriad of issues in each classroom, including asbestos tiles, to leaking windows and antiquated desks. Photo on Tuesday, July 13, 2021.

After receiving a School Board request this week for previously earmarked funds for the project, Stoney gave the school division until next Wednesday to address concerns he and other city officials have about the new school. Chief among them is the potential for overcrowding because the school division’s plan calls for a building that can accommodate 1,600 students.

The disagreement is the latest in a feud between city officials and the School Board over who should be in charge of building the new school. Wythe, which was built in 1960 and has only seen one renovation since then, is visibly aging, and its rebuild has been pushed back for nearly two decades.

Stoney said the school division’s response will determine whether his administration files a request for the City Council to approve the release of the funds, six months after the School Board passed a resolution wresting control of school construction projects from the mayor’s administration.

“I have offered you multiple opportunities to leverage City staff and resources to ensure that a new high school be built without delay. Despite not responding to letters sent by City Council and me, you assured the media and your constituents that you had a plan,” Stoney said in his letter. “I am disappointed that it took you this long to realize that you didn’t have the funds necessary to execute the very first contract of the process.”

Jonathan Young, the vice chair of the School Board who voted in the slender majority in favor of the “Schools Building Schools” resolution, said he was disappointed in Stoney for his actions. Young said the division’s plan to build the school for 1,600 students includes an assumption that some students will spend much of their time at a new career and technical center.

“The point is that we’re going to be adding over 1,000 students to that facility just an eight-minute drive down the road,” Young said.

The School Board’s decision to take unilateral control of its capital projects passed with a narrow majority of five members who voted for the measure against the advice of Superintendent Jason Kamras, who said the school division did not have the personnel or resources to manage construction without help from the city administration. The board has since hired two of the three positions Kamras said are needed to oversee school construction.

The five board members sought control of school construction out of concern for past school building costs and alleged conflicts the mayor has with companies who replaced previous schools — some of them have donated to Stoney’s re-election campaigns. The school board now hopes to award a contract next month after issuing a request for bids this summer.

Stephanie Rizzi, who represents George Wythe students and families in the city’s 5th District, said in a School Board meeting Monday that the possible delay of accessing capital funds feels like “a setup.”

“It just seems to me that every time we feel like we’ve got something worked out, it’s like a shell game. They move to something else. Instead of saying ‘OK look, how can we work together to help you achieve this?’” Rizzi said in an interview. “If this is what you really want to achieve, if the end goal is really a school for these kids, then at this point it should be, ‘OK, schools are building schools, how can we help?’ Not sit here and place blame and tell you what we did wrong.”

Detractors say the School Board having to ask the mayor and the City Council for access to the funds proves the district wasn’t ready. Some members of the board seemed surprised at the development during Monday’s School Board meeting, while others said they knew this would happen. Rizzi questioned Jonell Lilly, the School Board’s lawyer, about why she didn’t advise them on the issue. Lilly said budgetary items weren’t within her purview.

“How are we going to award the contract if we don’t have any money?” School Board Chair Cheryl Burke, who voted against the resolution in April, asked in an interview.

Burke noted that her colleague, Liz Doerr, kept attempting to point out studies showing that Wythe’s population would continue to grow. “This is nothing new ... but it was never received by the other five persons who continue to present resolutions and items to us without following through on the process before us.”

If the School Board wants to begin the design process for Wythe, Stoney, Chief Administrative Officer Lincoln Saunders and the City Council will have to approve a budget amendment to re-appropriate the funds to the School Board’s control.

Stoney said Tuesday that he remains concerned about the proposed design that the School Board is seeking. His administration had envisioned building a school with a capacity for 2,000 students.

“My job is to ensure that the dollars get to the School Board for [the] new George Wythe. However, part of doing my job is ensuring that taxpayer dollars are used properly,” Stoney said during a news conference Tuesday. “We should not open a facility that is overcrowded on day one.”

The five members of the School Board who voted for the “Schools Building Schools” resolution also voted to keep George Wythe High at a capacity of 1,600 students , saying that a building for 2,000 students was simply too big. They worry that building a massive high school could set a pathway for the consolidation of high schools.

Fifth District City Council member Stephanie Lynch concurred with the mayor in an interview later Tuesday, adding that the school division has yet to hire all the positions the superintendent says are needed to manage the construction project.

“I think we’re all very committed to releasing the money to them. We plan to do so, but it would be absolutely negligent and irresponsible of us to not take the opportunity … to vet their plans,” Lynch said. “They have not proven that they can take this over yet.”

As the Richmond School Board met Tuesday in the George Wythe High School auditorium, Richmond students and families held signs urging the board to build a new school quickly.

George Wythe high school in Richmond, now into its seventh decade shows signs of its age. Bobby Hathaway. Director of facilities at RPS (left) explains the myriad of issues in each classroom, including asbestos tiles, to leaking windows and antiquated desks. Photo on Tuesday, July 13, 2021.