Schapiro: Va. balked on women's vote out of racial fears
2 comments
Share this
Return to homepage × 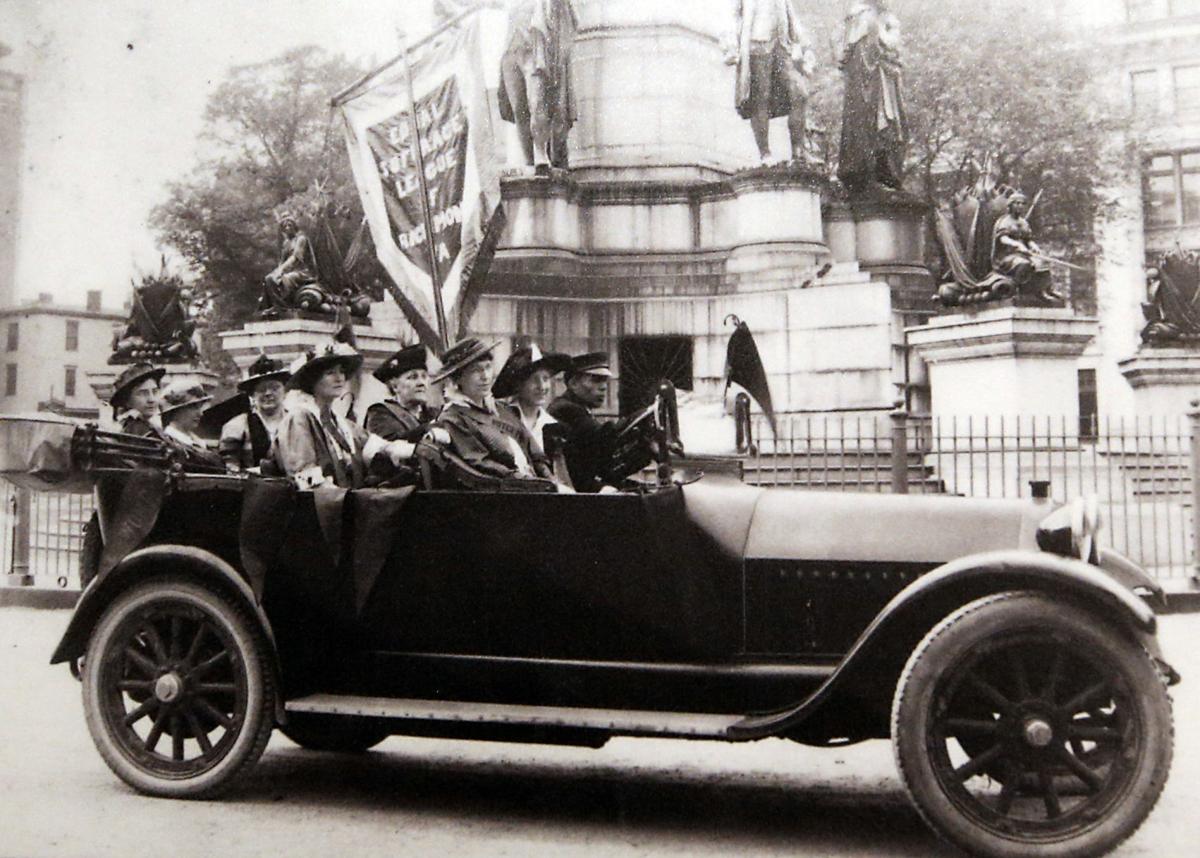 This undated photo from National Woman’s Party archives shows women suffragists being driven through Richmond’s Capitol Square and can be found in the Library of Virginia exhibit, “We Demand: Women’s Suffrage in Virginia.”

Editor’s note: The following is largely based on a column that originally was published in June 2018

No thanks to Virginia, women got the vote. Thanks to women, Virginia politics was reinvented.

There are a record 41 women in the state legislature, including the speaker of the House. Women hold three of 11 seats in the congressional delegation. Three are running for governor, an office that in 1993 eluded the first woman elected statewide as attorney general in 1985.

A century before these displays of women’s clout, the initiative that would make it possible — the constitutional amendment giving women the vote — was fiercely being debated in Virginia, where conservative white, male grandees warned women’s suffrage augured a terrifying prospect: restored Black political power.

Though the franchise was extended to women 100 years ago this month, Virginia, whose plutocracy long held that democracy meant the wrong people were in charge, would not approve the 19th Amendment to the U.S. Constitution until 1952. That was just ahead of the state’s failed attempt to preserve racially segregated public schools in defiance of the U.S. Supreme Court ruling that prohibited them.

In 1919, 25 men, some of whose names still are synonymous with business and politics, made a case to the General Assembly for continuing to deny women the vote that entirely was based on racism.

At the time, the voting-age population in Virginia — whites and Blacks, males and females, age 21 and older (the voting age was lowered to 18 in 1971 through the 26th Amendment) — was about 1 million. Roughly 70% were white, with men outnumbering women; 30% were Black, with women outnumbering men.

A poll tax and literacy test, set by the Virginia Constitution in 1902 and banned by federal law in 1965, removed most Blacks and poor whites from the voter rolls. Blacks, lifted from slavery in the Civil War and guaranteed the vote a short time later, supported the Republican Party of their perceived liberator, Abraham Lincoln.

“It was clear that the Negroes intended to continue to vote solidly on race lines and if allowed their voting according to numbers would hold the balance of power in case of a division between the whites and use it for their racial and political advantage,” the pamphlet said.

“Woman suffrage now would do one of two things — it would undo the work of the constitutional convention by throwing the balance of power into the hands of the Negro women instead of the Negro men, or it would force us back to the methods from which we delivered ourselves with so much thought and pains and involve our white women in acts in which we were ashamed to have our men engaged.”

In other words, white men can protect white women by disenfranchising Blacks; in effect, restoring them to servitude.

Blacks had started voting in Virginia in 1867. From that year until the close of the 19th century, nearly 100 Blacks were elected to the House of Delegates, the Virginia Senate and Congress or were delegates to the post-Civil War constitutional convention that granted the vote to all adult men, even before the 15th Amendment to the U.S. Constitution did.

The pamphlet, however, said the 15th Amendment’s protections had been “abandoned and abrogated ... by common consent of the common sense of the country accepting our special laws to defeat it because it meant ruin” to the South, a reference to the nation’s inattention — some of it intentional — to white backlash to post-Civil War gains by Blacks. It would fuel the growth of a regional Democratic bloc preoccupied with segregation.

“There is strong evidence that behind the woman suffrage movement as it has taken shape in the Anthony Amendment” — the measure had been named for Susan B. Anthony, the women’s rights pioneer — “is conspiracy to force confusion and disaster on us and to arouse the entire Negro vote to make the South the invincible Republican citadel the 15th Amendment was intended to make it.”

The committee’s all-male membership was a Who’s Who of Richmond’s upper crust and included lawyers, judges, manufacturers and physicians. And in a city where dynasties endure, their family names are familiar: Bryan, McGuire, Cabell, Crump, Valentine, Pinckney, Anderson and Hunton.

Supporters of women’s suffrage, of course, would prevail, though the distinction of completing ratification of the 19th Amendment would fall to Tennessee, which approved it Aug. 18, 1920. Thirty-two years later, when it didn’t make a difference, Virginia followed suit. By that time, women were establishing themselves in the halls of power. Blacks would follow, though their gains took longer.

Despite those breakthroughs — and the changing Virginia that made them possible — the old thinking about women and Blacks lingers. Reading the committee’s bigoted musings, one is struck that its members, perhaps accidentally, got one thing right even though they were on the wrong side of history:

Instead of taking small steps to solve a big problem, the Virginia Senate passed a package of sweeping legislative reforms on Thursday that wo…

disciplinary records and grades — to prove its hack was successful.

As of Thursday, there were almost 400 active cases of COVID-19 detected at the Deerfield Correctional Center in Capron, which houses many of t…

This undated photo from National Woman’s Party archives shows women suffragists being driven through Richmond’s Capitol Square and can be found in the Library of Virginia exhibit, “We Demand: Women’s Suffrage in Virginia.”