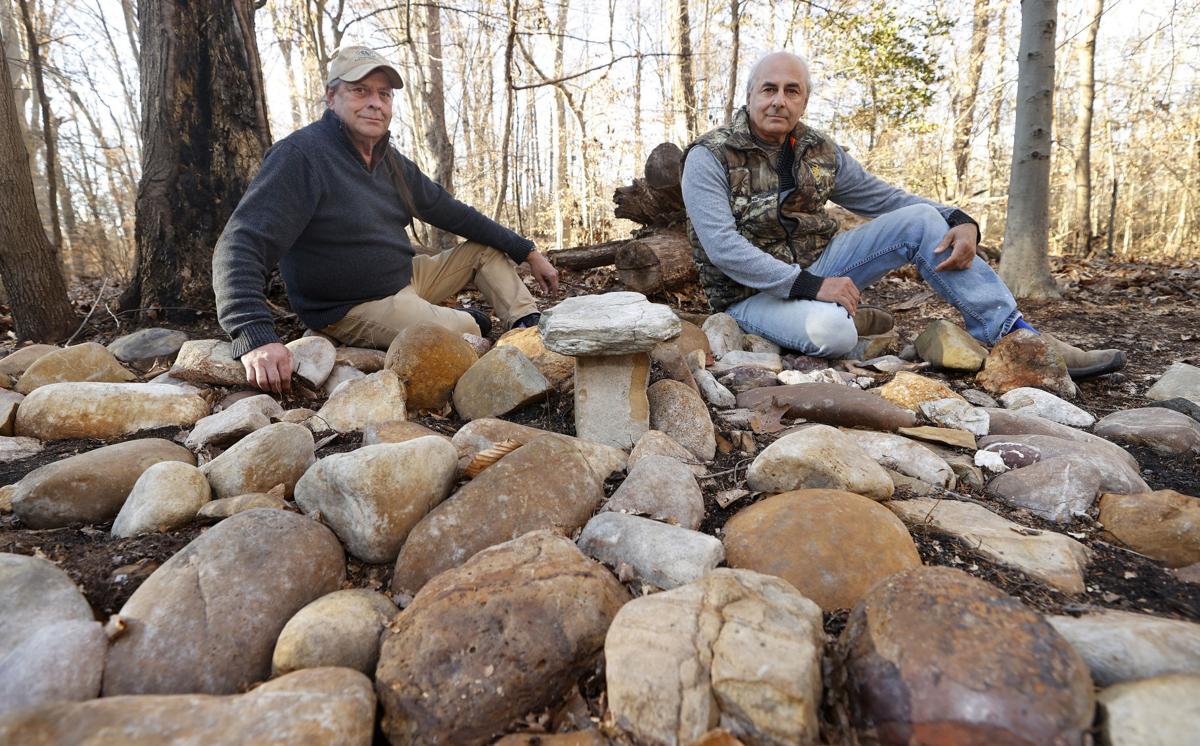 Terry Price (right), chief of the Wolf Creek Cherokee, and his brother, Gary Price, vice chief of the tribe, sit by an ancient site in eastern Henrico County that they use for religious practices and prayer ceremonies. 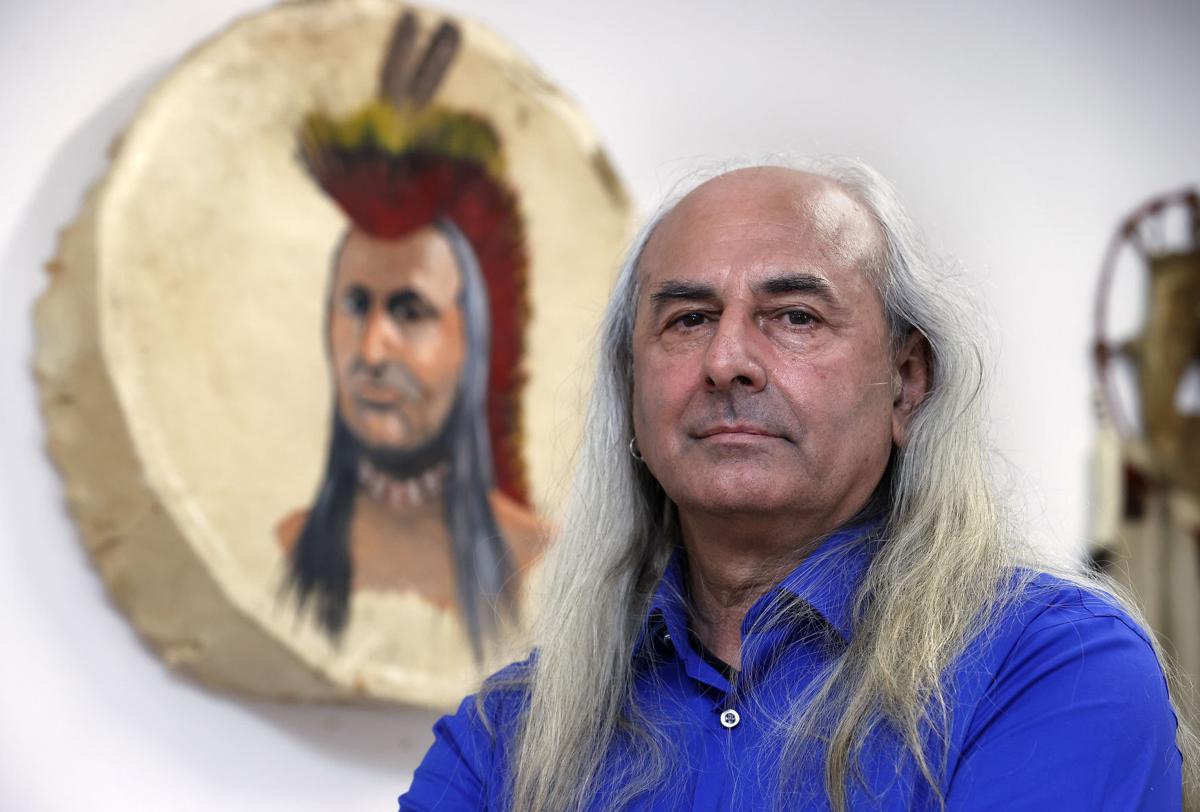 A group of Cherokee Indians based in Henrico County wants to be recognized by Virginia.

But the seven federally recognized tribes in Virginia asked the legislature to hold off, and the largest of the country’s three federally recognized Cherokee tribes strongly opposed a resolution in the General Assembly this year that would have granted the Wolf Creek Cherokee state status.

Lawmakers rejected the request, as they have several times going back to 2015. But the debate over what constitutes an American Indian tribe put a spotlight on a problem: Virginia’s process for reviewing an application for state status had broken down, and the Wolf Creek Cherokee’s request sat dormant in Gov. Ralph Northam’s office for over a year.

“What do you do when a process is put in place and no one follows the process and the only option they had was to come before legislators, and then still to no avail?” said Del. Delores McQuinn, D-Richmond, a civil rights advocate who sponsored the resolution seeking state recognition for the Wolf Creek Cherokee.

“I see this as some of the same kind of injustices that have occurred over the years with other minorities,” she added.

Unlike federal recognition, which results in access to health care and federal money, state recognition simply brings the dignity of being officially recognized by the state government, and perhaps a photo with the governor.

Only the General Assembly can recognize a tribe. In 2016, the Wolf Creek Cherokee were told to wait because the state was going to create a new process for applying.

The Wolf Creek Cherokee, represented pro bono by attorney William Hurd, sent the state a letter of intent to seek state recognition in October 2019, and filed their request in January 2020.

“We’ve been around for a long time,” said Chief Terry Price. “I think now we should be recognized and be respected [for] who we are, just like everybody else.”

The tribe’s request to the secretary of the commonwealth outlines its history and how it’s been acknowledged by local and state government, news media, federal agencies and school systems. The tribe runs a museum in eastern Henrico, showcasing artifacts and exhibits and serving as a location for drum ceremonies.

Cherokee Indians in Virginia were located in the southwest part of the state, and spoke a different language than the tribes in the eastern part of the state that formed the Powhatan confederation, the request says. Price joins other Native American chiefs at powwows and events, and the U.S. Department of Health and Human Services asked the tribe to assist with an educational video.

The request lays out the Cherokee history in Virginia and the group’s lineage of ancestors, saying it has 68 enrolled members.

But the state didn’t respond to the petition. It turns out that the Virginia Indian Advisory Board hasn’t met since May 2018.

The secretary of the commonwealth posted the Wolf Creek Cherokee letter of intent online. “So why no one moved on it, that left me somewhat baffled,” said McQuinn, the lawmaker who sponsored the resolution.

Kelly Thomasson, the secretary of the commonwealth, took responsibility on Feb. 19 while speaking about the tribe’s request before the Senate Rules Committee.

“During the past tumultuous year, unfortunately, this petition did not receive the attention it should have,” she told senators. “I apologize for that.”

The Wolf Creek Cherokee had a new problem in the legislature, though. Their request for state recognition passed the House of Delegates without opposition, but ran into opposition from the Oklahoma-based Cherokee Nation, the largest federally recognized Cherokee tribe.

The principal chief of the Cherokee Nation in Tahlequah, Okla., wrote to Northam on Feb. 1. The tribe has 385,000 citizens worldwide and spans a 7,000-square-mile reservation in northeastern Oklahoma, where more than 141,000 of its citizens reside.

Chief Chuck Hoskin Jr. wrote that the three federally recognized Cherokee tribes “are the only tribes in the United States with legitimate claim to Cherokee identity, ancestry, and citizenship.”

As sovereign nations, Hoskin wrote, tribes “maintain the right to decide who is, and who is not, Cherokee.” He said the General Assembly would undermine the federal recognition process by granting recognition to a group that hasn’t met it.

“I reject any and all attempts to threaten our government-to-government relationship with the United States, and the sovereignty we have maintained since time immemorial,” he wrote. “As such, it concerns me greatly that Wolf Creek Cherokee Tribe, Inc. erroneously claims to be Cherokee, and intends to seek recognition as an Indian tribe from the Commonwealth of Virginia.”

Hoskin testified against the resolution via video at the Senate committee hearing.

In an interview with the Richmond Times-Dispatch, he said requests like that of the Wolf Creek Cherokee come up regularly.

Sometimes groups want tribal status in order to market arts and crafts as Native American arts and crafts under a federal law, he said. Or they may want federal contracting opportunities.

But beyond economics, the Cherokee suffered great loss of land, treasure and life at the hands of the U.S. government, and their identity is valuable, he said.

“It offends us to our core when an organization posing as a Cherokee tribe claims that identity.”

The Wolf Creek Cherokee, he said, “has built their identity on, so far as I can tell, a collection of family stories. Family stories that we don’t know the veracity of.”

He referred to Price as “a fake tribe’s fake chief” and “a man who’s cloaked himself in words and stories.”

Some states have recognized Cherokee tribes. Hoskin said the Cherokee Nation does not recognize them as tribes.

Marion Werkheiser, an attorney with the law firm Cultural Heritage Partners, represents them and spoke on their behalf at the Senate committee hearing.

She said they wanted the resolution tabled until next year so the state could use the process created in 2016 for the Virginia Indian Advisory Board to review the application.

“The reason we were opposed to it is because they have a process for state recognition and they didn’t follow the process,” said Chief Earl Bass of the Nansemond, based in Suffolk. “We’re just saying follow the process.”

Bass said, however, that he was unaware the Virginia Indian Advisory Board hadn’t been meeting. Chief Frank Adams of the Upper Mattaponi Tribe in King William said the same — he wanted the Wolf Creek Cherokee to go through the state process, but wasn’t aware the advisory board hadn’t discussed the petition.

‘The Cherokee has always been here’

Virginia recognizes four Native American tribes in addition to the seven federally recognized tribes. Two of them — the Cheroenhaka (Nottoway) based in Courtland and the Patawomeck based in Fredericksburg — support the Wolf Creek Cherokee request.

Chief Walt “Red Hawk” Brown of the Cheroenhaka wrote to McQuinn to say he’d known Price for a long time.

“He has strong values and commands an in-depth knowledge of his tribe’s heritage and history,” he wrote.

Brown said in an interview that he couldn’t believe the chiefs of the seven federally recognized tribes retained a lawyer to speak for them against the Wolf Creek Cherokee’s request.

“They could have spoke on their own behalf,” he said. “What did they go get a lawyer for?”

He said the legislature should have granted state recognition this year. “The Cherokee has always been here. ... They well deserve to be state-recognized.”

Thomasson, the secretary of the commonwealth, said she’s moving quickly to fill an opening on the state advisory board so the petition can be reviewed.

During the Feb. 19 committee hearing, Price didn’t get a chance to tell that to lawmakers, though. He and several others from the Wolf Creek Cherokee signed up to speak, but couldn’t get into the Zoom room when the time came for speakers. Price even had his daughter, a schoolteacher, set up his Zoom for him.

He watched online as the Senate Rules Committee, by unrecorded voice vote, said no to his request.

Terry Price (right), chief of the Wolf Creek Cherokee, and his brother, Gary Price, vice chief of the tribe, sit by an ancient site in eastern Henrico County that they use for religious practices and prayer ceremonies.