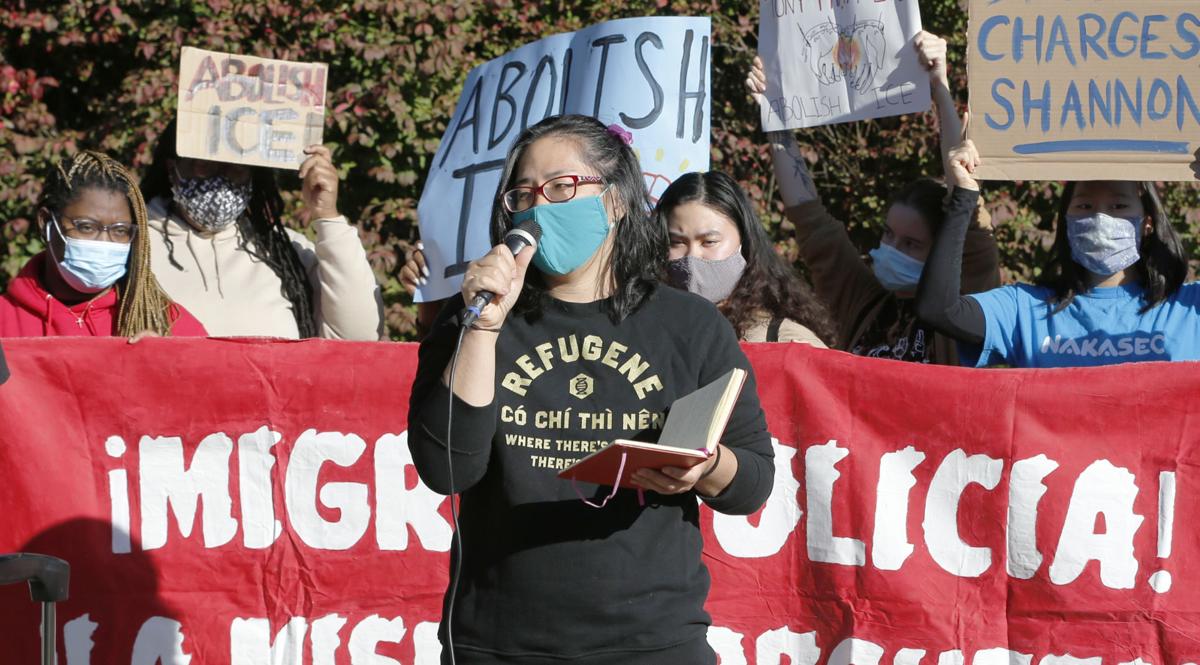 Nancy Nguyen spoke Thursday at a protest in Henrico. She was arrested by Philadelphia police and is accused of littering and trespassing at a Sept. 8 protest outside the home of the acting director of ICE, who lives in Henrico. 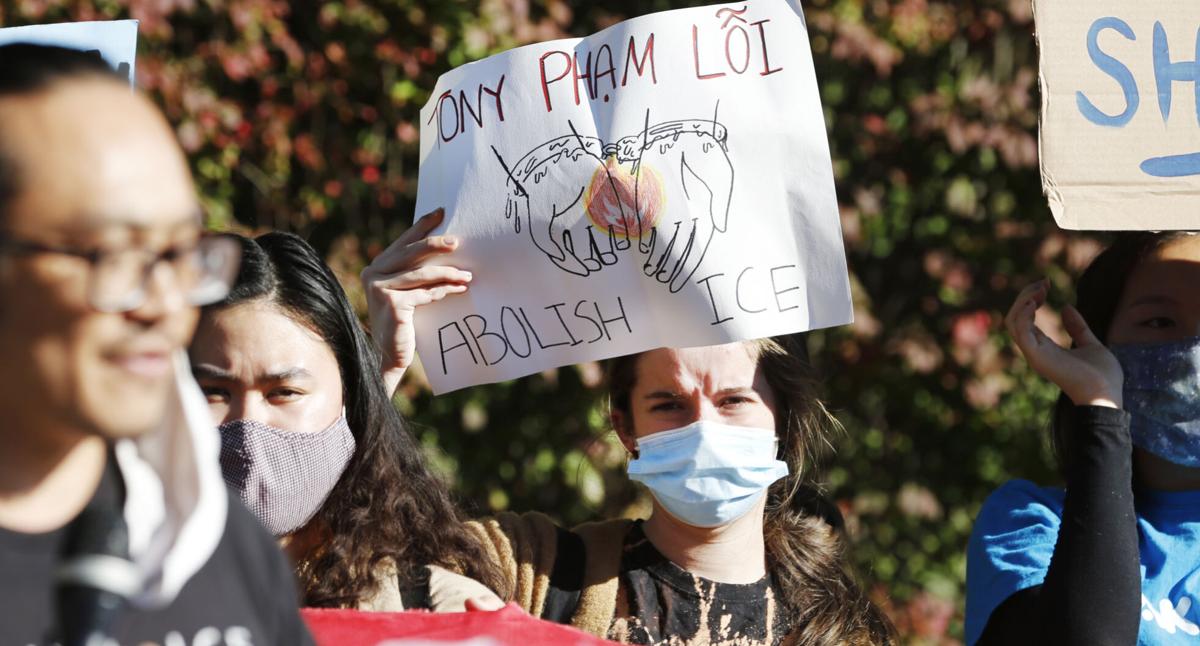 A protester outside of the Henrico County Sheriff’s Office urges the abolition of ICE. 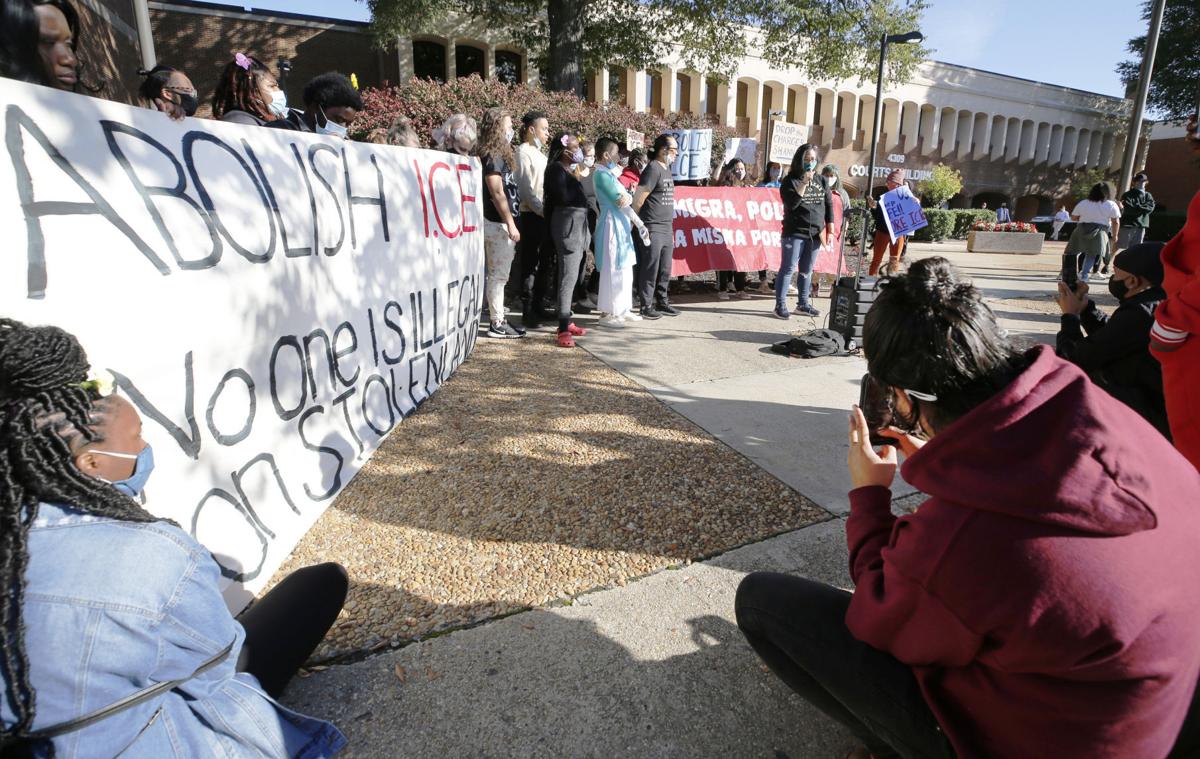 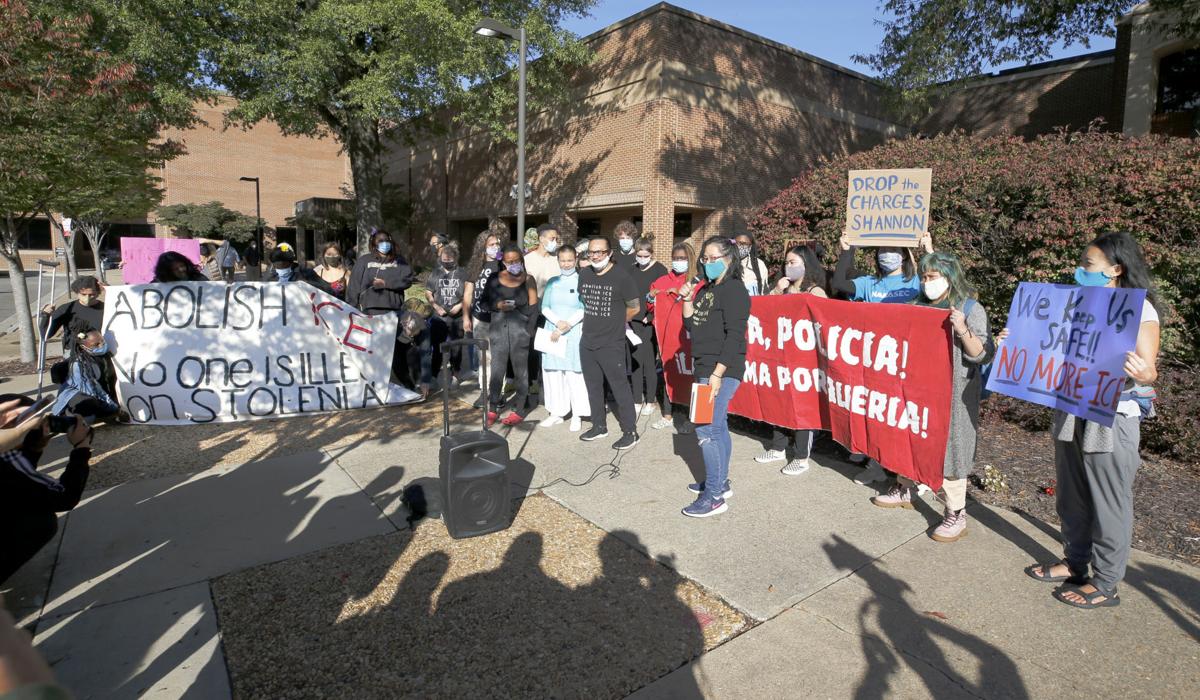 A month ago, protesters showed up at the Henrico County home of the top U.S. Immigration and Customs Enforcement official, Tony Pham.

Last week, an immigration activist was arrested by police in Philadelphia on two misdemeanor charges of littering and trespassing in connection with the protest at Pham’s home.

On Thursday, many of the same protesters made their presence known outside the Henrico Sheriff’s Office, to speak out against what they call a silencing and targeting of activists who advocate against ICE policies — and to push for the Henrico commonwealth’s attorney to drop all charges in the Sept. 8 incident. Then protesters who were charged turned themselves in.

Nancy Nguyen, the activist arrested by Philadelphia police, is executive director and co-founder of VietLead, a political advocacy group in Philadelphia and New Jersey that serves Vietnamese and Southeast Asian communities.

Nguyen, 38, says she was changing her 18-month-old baby’s diaper with her 3-year-old feet away when she was detained by police and subsequently held for 21 hours.

“The reality is we came with signs and bullhorns and crosses with the names of folks who have died in ICE to [Pham’s] doorstep, and he has tried to bring the state apparatus of violence to our homes,” Nguyen said at Thursday’s gathering outside the Henrico Sheriff’s Office.

Nguyen addressed a crowd of more than 50 people, including activists from North Carolina who also were accused of littering and trespassing at Pham’s home. A total of nine people had warrants out for their arrest, but Nguyen was the only one arrested. The rest were issued summons.

In a news release Monday, days after Nguyen was arrested, Henrico police said protesters had dumped trash in Pham’s yard and “caused fear to his family.”

At a Department of Homeland Security news conference Friday, Pham said he respects the right of people to peacefully assemble and protest and said that Henrico police had investigated the protest without his knowledge.

When asked for comment, ICE directed a reporter to the Homeland Security news conference.

Pham was named acting director of ICE on Aug. 25. He had previously served as ICE’s principal legal adviser, as well as a Richmond prosecutor and a superintendent at the Virginia Peninsula Regional Jail. He’s a Vietnamese refugee whose family fled Saigon in 1975 — a move that immigration attorney Tin Nguyen said Thursday wouldn’t be possible under the current administration.

“My understanding [is] ... that the matter was turned over to the local prosecutor, who made the charging decision,” said Pham, who was not home during the protest but his wife and two children were. “They made, as the public safety entities in their locality, the decision to bring the Class 1 misdemeanor charges.”

Philadelphia City Council members denounced Nguyen’s arrest by Philadelphia police officers, with council member Helen Gym calling it an “absolute waste of local resources” and a “gross overreach and targeting of a major [Asian American and Pacific Islander] leader in our city” on Twitter on Oct. 9.

A Philadelphia city spokesperson told The Philadelphia Inquirer that police had followed standard procedures and acted once notified of an active arrest warrant.

“Therein lies the problem because, as was indicated on the document, it could have been issued as a summons,” Henrico Commonwealth’s Attorney Shannon Taylor said.

Taylor added that an arrest warrant does not necessarily mean being handcuffed and physically arrested. She said that to her knowledge, no information was relayed from Henrico authorities to law enforcement officials in Pennsylvania or North Carolina that suggested that be the case.

“That does lend to the rhetoric that is being said which is she was being targeted because she is an activist, and if that is the case, again something that is not in my control, I do not agree,” Taylor added.

The Philadelphia Police Department did not respond to requests for comment.

When asked about allegations that Nguyen’s arrest was a targeted effort by ICE to silence those speaking out against its policies, an ICE spokesperson referred questions to Henrico police.

Taylor said she had heard nothing of ICE’s involvement.

“We were only addressing the actions of selected individuals that we believe went beyond just the First Amendment protected speech ... but it is not something that should be responded to with any severe punitive actions,” said Taylor, adding that the county is not asking for jail time.

The court summons asked those charged to return Monday, according to Taylor.

Nancy Nguyen spoke Thursday at a protest in Henrico. She was arrested by Philadelphia police and is accused of littering and trespassing at a Sept. 8 protest outside the home of the acting director of ICE, who lives in Henrico.

A protester outside of the Henrico County Sheriff’s Office urges the abolition of ICE. 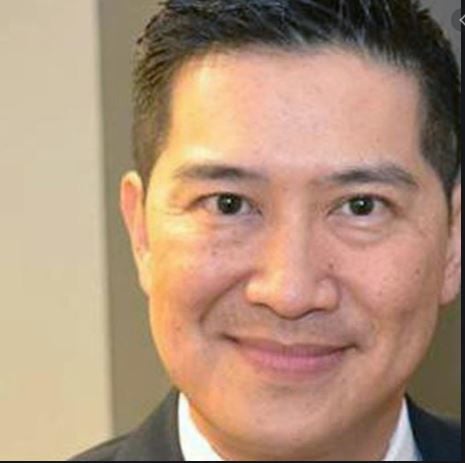