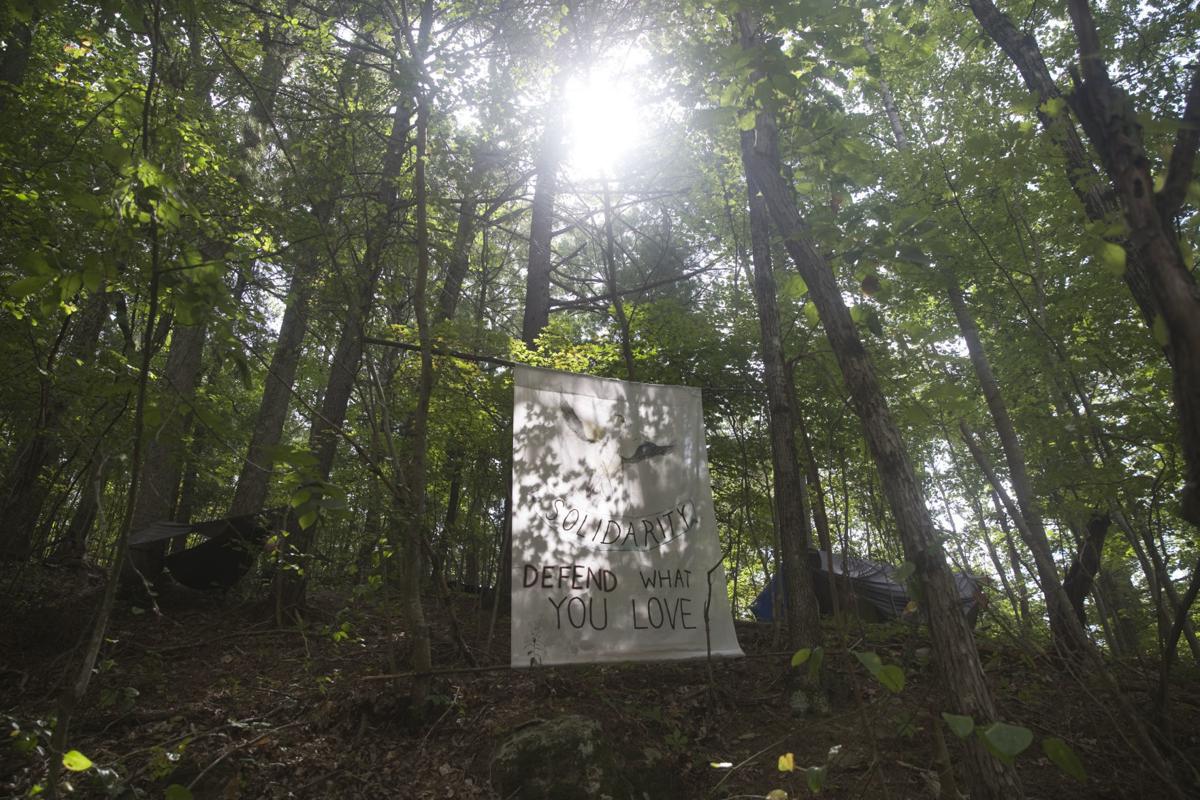 A backlit banner hangs amid the trees on a slope on Yellow Finch Lane in Montgomery County near an ongoing tree-sit to block pipeline construction. 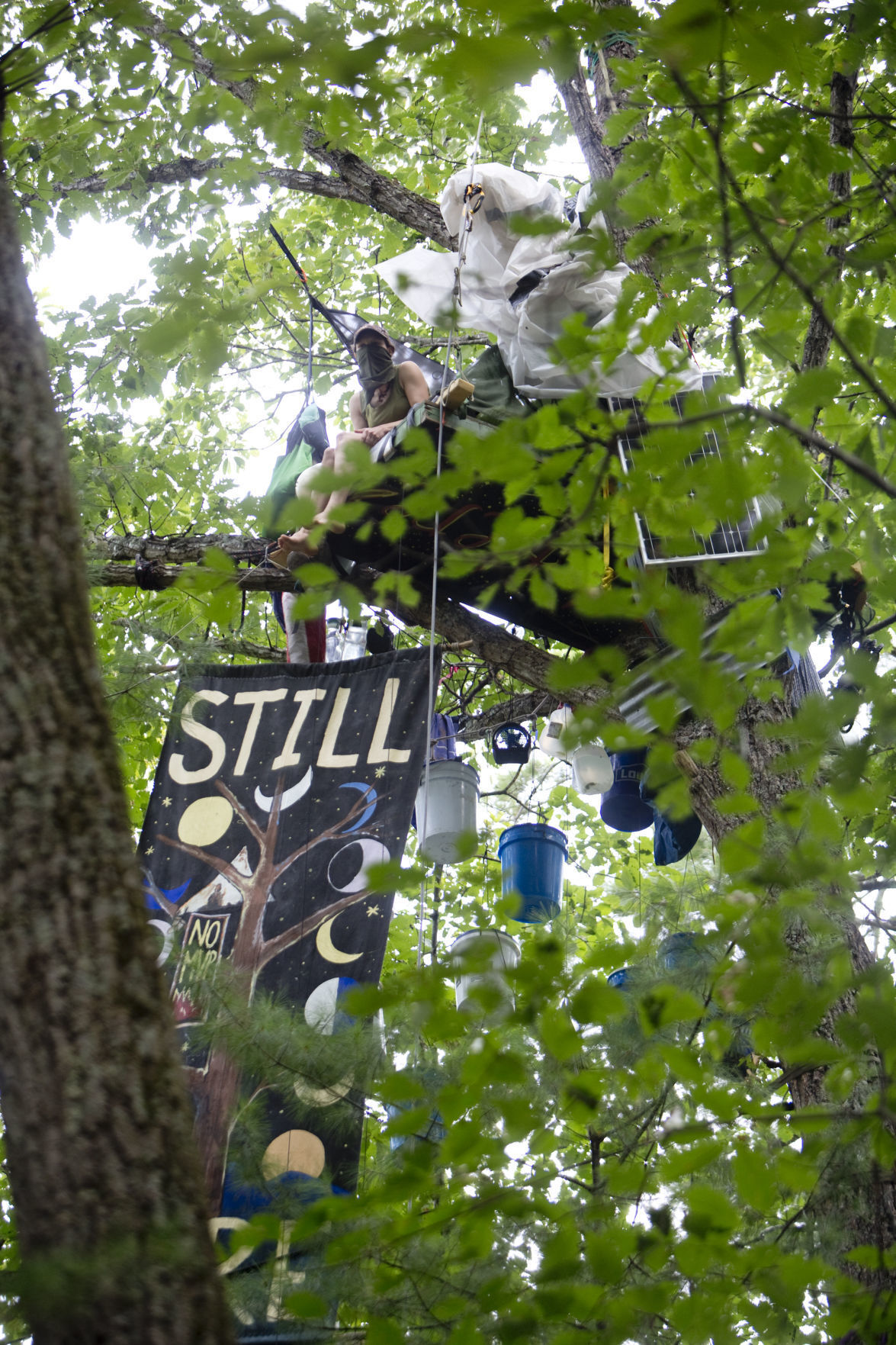 Thursday marks the one-year anniversary of the Yellow Finch Lane tree-sit, intended to block work on the Mountain Valley Pipeline in Montgomery County near Elliston.

ELLISTON — Along a 303-mile corridor of land stripped bare for a natural gas pipeline, the only trees left standing are here, on a steep mountainside in Montgomery County.

And it is here, not coincidentally, that opponents of the Mountain Valley Pipeline are stationed high above the ground in a white pine and a chestnut oak.

Meant to block construction of the deeply divisive project, the tree-sit marked its one-year anniversary Thursday in a patch of forest that has remained largely untouched as developers build the massive pipeline from northern West Virginia through Southwest Virginia to connect with a pipeline near the North Carolina line.

From her vantage point in the woods, pipeline opponent Lucy Branham had no doubt that the two protesters, who sat in tree stands about 50 feet above her head, were making a difference in the fight.

“All you have to do is look across the road,” Branham said, pointing to a spot on the other side of Yellow Finch Lane where a 125-foot wide easement for the pipeline had been cleared, right up to the edge of the occupied trees.

“And here we have a beautiful, functioning forest,” she said.

Neither of the masked tree-sitters — who are subject to a pending court action by Mountain Valley to have them removed — was willing to be identified.

But they talked Thursday about why they are willing to live in 4-by-8-foot tree stands to block a pipeline that they say will change the planet’s climate with its reliance on a fossil fuel, pollute the steep slopes and pristine streams it bisects with sediment washed from construction sites, and mar the landscape in other ways.

“The world’s on fire, and I think it’s a pretty terrible idea to continue the construction and the conditions that are making it that way,” the man in the white pine said.

Since Sept. 5, 2018, a variety of protesters have taken turns sitting in tree stands built on a piece of private land condemned for the pipeline. Supporters in a ground camp send up food, water and supplies in plastic buckets suspended by ropes, while keeping their eyes peeled for anyone who might try to broach the blockade.

A tangle of colored string stretching between trees and a barrier of wooden pallets makes any ascent to the tree-sits, already challenging on account of the steep slope, even more difficult.

Although Mountain Valley is unable to cut the occupied trees and ones near them without risking the lives of the tree-sitters and possibly others, the joint venture of energy companies has been busy digging trenches and burying the 42-inch diameter pipe in other locations.

About 238 miles of pipe have already been laid, it said in a court document filed last week, and the only trees that have not been felled are on a 500-foot stretch of the construction zone where the tree-sitters continue to sit.

Since tree-cutting began in February 2018, other opponents have sat in trees, chained themselves to construction equipment and blocked work in other ways. All have been removed or left on their own, and more than 50 people have been arrested in the two Virginias.

Mountain Valley wants to remove the Yellow Finch tree-sitters with the help of the courts, but so far the company has been left out on a legal limb.

In December, the company filed a request for a preliminary injunction in federal court, which would have enabled U.S. Marshals to extract the protesters by means that were not explained. In early August, U.S. District Court Judge Elizabeth Dillon denied the request, made as part of an eminent domain proceeding through which Mountain Valley gained control of the land where the dispute has played out.

Because the tree-sitters had no ownership interest in the land, Dillon ruled, they could not be included in the case.

Mountain Valley then turned to state court, where it sought a similar preliminary injunction in Montgomery County Circuit Court.

Shortly before an Aug. 15 hearing, attorneys for the tree-sitters had the case moved back to federal court. They cited technical grounds, saying that the company and those it sued — the current tree-sitters, previous occupants of the stands and a group of ground-team supporters — were from different states.

But once the case was back before Dillon, the attorneys admitted they had no case for what’s called a “diversity of citizenship” transfer to federal court.

Lawyers for Mountain Valley contended they had been ambushed in an attempt to stall their effort to have the tree-sitters removed.

Attorney Wade Massie asked that the case be moved back to state court — and that the tree-sitters’ attorneys be made to pay the legal bill that he and a co-counsel ran up preparing for a hearing that was called off at the last minute.

Dillon ordered that $7,155 in Mountain Valley’s legal costs be paid by attorneys Tammy Belinsky of Floyd County, Terry Frank of Richmond and Sandra Freeman of Denver. She also transferred the case back to Montgomery County, where a Sept. 12 hearing has been scheduled.

Belinsky, Frank and Freeman argued in court papers that they were pressed for time and had difficulty sorting through Mountain Valley’s complex corporate structure, which they likened to a “Russian nesting doll.”

When the case comes back up in court, the company could face another challenge.

On Aug. 15, the same day that Mountain Valley would have sought removal of the tree-sitters in state court had the case not been transferred, the company told federal regulators that it was suspending construction on parts of the pipeline.

The voluntary suspension came three days after a coalition of environmental groups filed a legal challenge arguing that endangered and threatened species would be harmed by continued construction, which has caused large amounts of sediment to be washed by rainwater into their habitats.

Mountain Valley agreed not to work in the watersheds of streams populated by the Roanoke logperch and the candy darter, two endangered species of fish. That includes the area where the tree-sitters are stationed.

But the suspension has not deterred Mountain Valley’s efforts to remove the protesters.

“As related to potential interference with endangered species, removal of the opponents and any tree felling would be coordinated with the agencies under the terms of the voluntary suspension,” company spokeswomen Natalie Cox wrote in an email.

The company says it plans to complete the pipeline by mid-2020, when it will begin to deliver natural gas to markets up and down the East Coast.

Over budget, behind schedule

The man in the white pine wouldn’t say how long he has been there.

How long would he stay?

Mountain Valley has already tried to order the tree-sitters down, with no success. If an injunction is granted, it’s not clear how police would remove the protesters if they continued to refuse to come down.

In the past, authorities have used mechanized lifts to remove people in trees or atop construction equipment. But getting the wheeled devices from Yellow Finch Lane up the steep slope seems all but impossible.

“Gosh, you know, that’s a great question,” the tree-sitter said when asked how he might be removed. “I imagine they’re befuddling over that as we speak.”

While acknowledging that the tree-sits might eventually come down, and the Mountain Valley Pipeline might be completed, some opponents hope their resistance will at least cause the next developer to think twice about such a project.

“I absolutely don’t think any resistance to injustice is in vain,” Branham said.

Construction of the $5 billion project is running over budget and behind schedule, in large part due to legal challenges of federal permits filed by the Sierra Club and other environmental groups.

Approvals for the pipeline to pass through the Jefferson National Forest and cross more than 1,000 streams and wetlands have been suspended, and opponents are now asking for a complete stop of work while they challenge another permit that deals with the pipeline’s threat to endangered species.

Other opponents have spoken at public hearings and participated in the regulatory process.

But to the protester sitting Thursday in the chestnut oak, direct actions like hers are needed if the pipeline is to be stopped.

January 17, 2022: Check out A1 Minute NOW – Check out MLK events and volunteer opportunities at area universities; Free entrance to all national parks today; MLK Jr. Day of reading at Children’s Museum of Richmond

Up in the trees and on the ground, opposition to Mountain Valley Pipeline continues

A judge has delaying a hearing on Mountain Valley's attempt to remove three tree sitters, while opponents object to continued work on the controversial pipeline.

Judge orders tree-sitters down after more than 2 years

A temporary injunction issued Thursday by Montgomery County Circuit Court Judge Robert Turk ordered the three unidentified tree-sitters and 10 of their supporters to be gone by Monday.

Work on the Mountain Valley Pipeline might be stalled for the winter, but that has not stopped the legal challenges against the embattled project.

Unable to convince a federal judge to remove two tree-sitters blocking work on the Mountain Valley Pipeline, attorneys for the company are turning to state court in an effort to end the long-standing dispute.

A backlit banner hangs amid the trees on a slope on Yellow Finch Lane in Montgomery County near an ongoing tree-sit to block pipeline construction.

Thursday marks the one-year anniversary of the Yellow Finch Lane tree-sit, intended to block work on the Mountain Valley Pipeline in Montgomery County near Elliston.