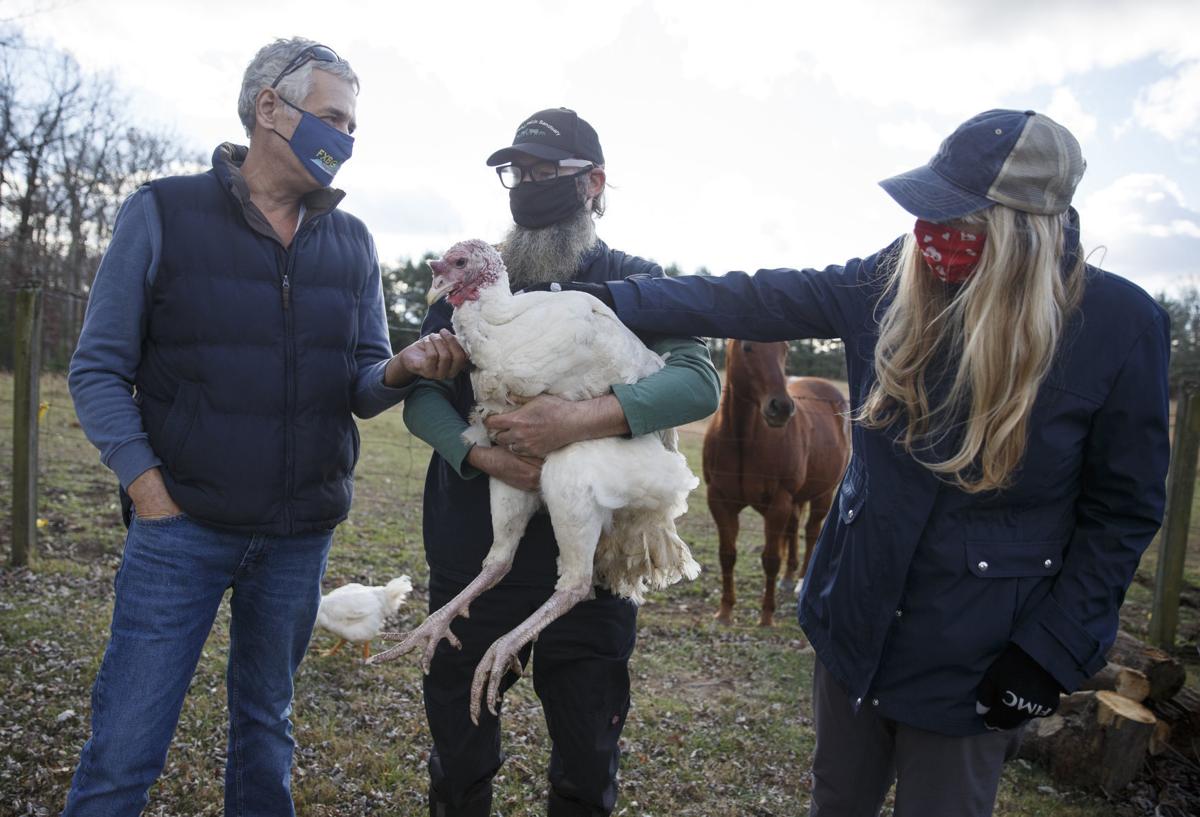 John Netzel holds Bruce the turkey as the bird is petted by his rescuers, Phil Solow and Mari Kelly. 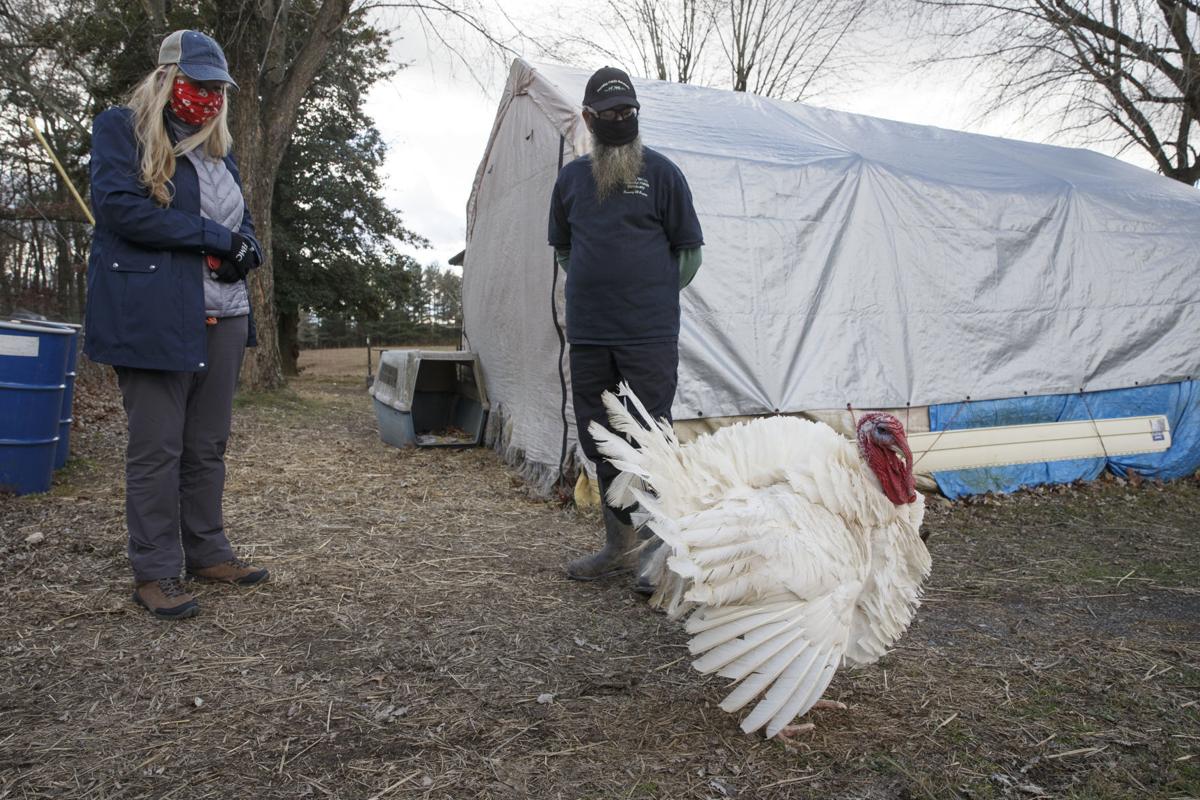 Mari Kelly of Fredericksburg and John Netzel, founder of Peaceful Fields Sanctuary, look at Mondo, one of three turkeys Kelly bought and sent to the sanctuary in Winchester so they wouldn’t be eaten. 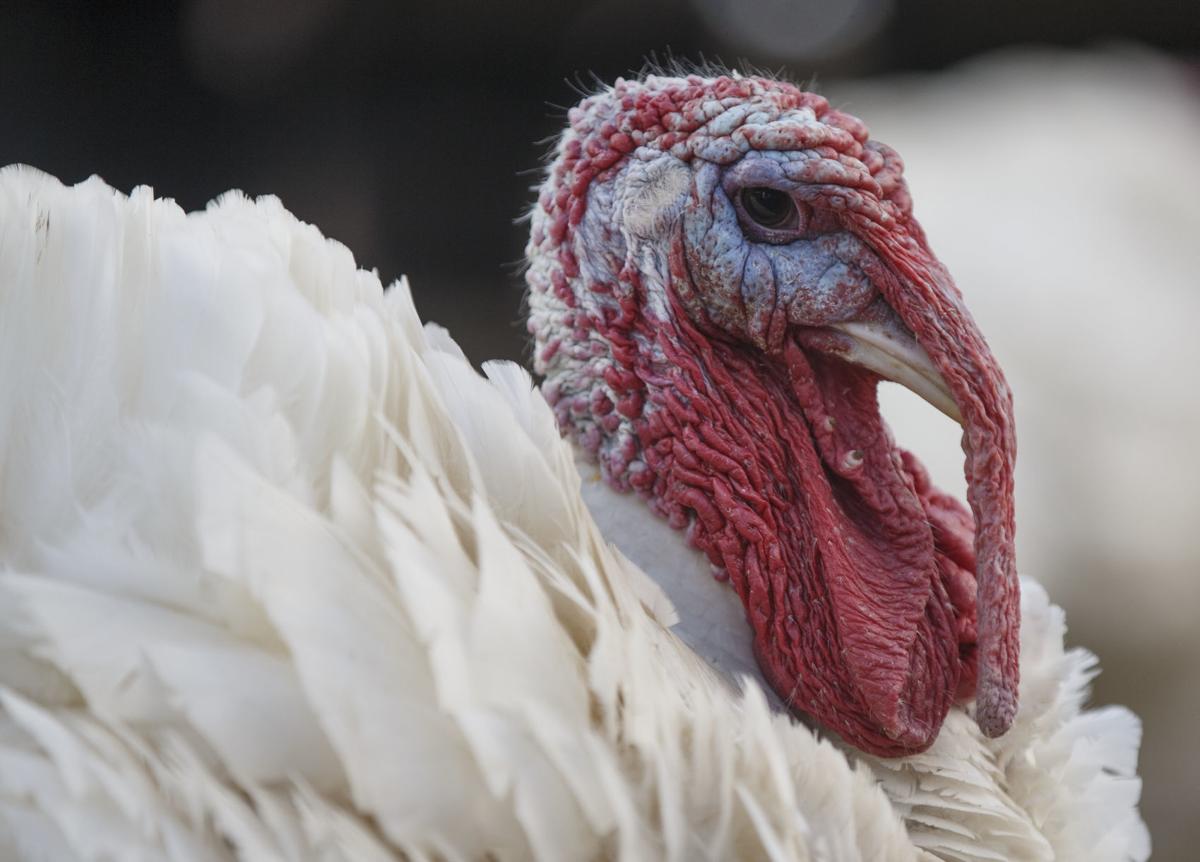 Mondo eyes a visitor to her new home at Peaceful Fields Sanctuary. 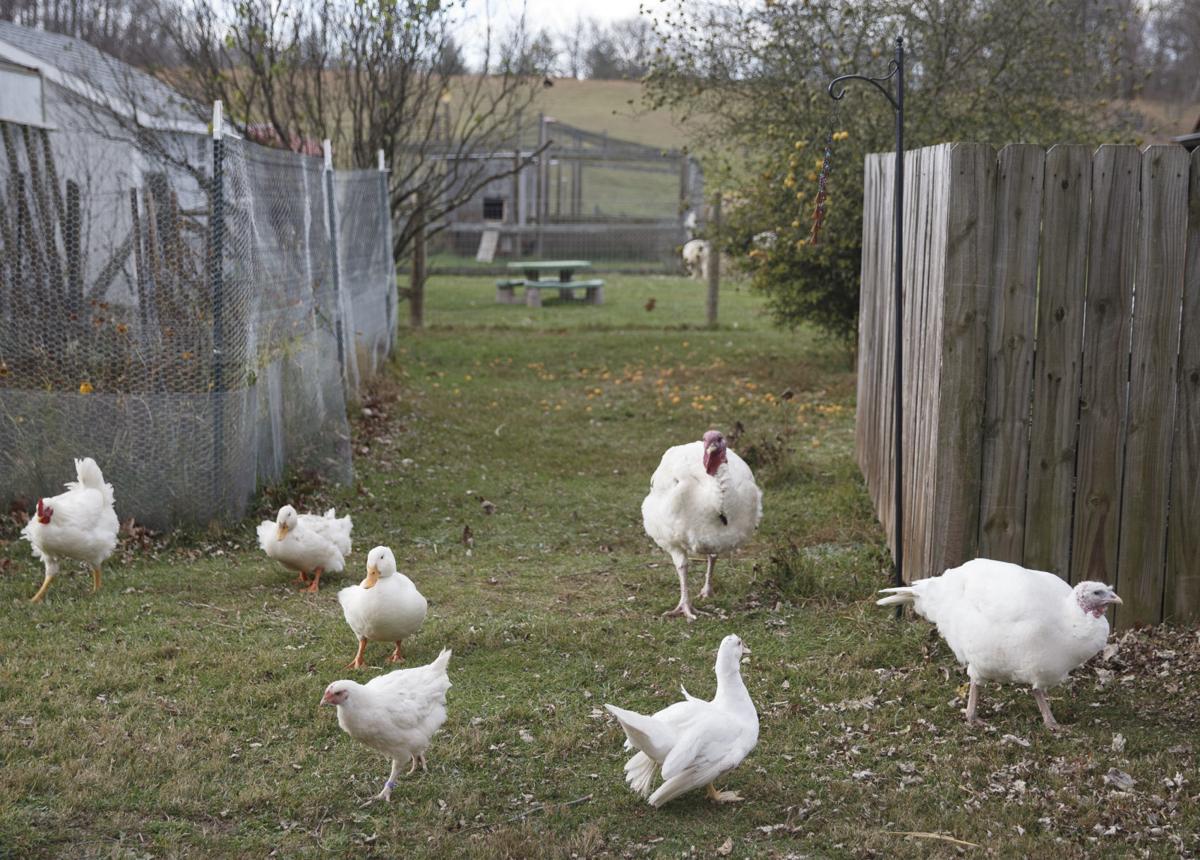 Two of the turkeys Mari Kelly saved from a Stafford farm wander around with other sanctuary residents.

By ROB HEDELT The Free Lance-Star

WINCHESTER — Gobbles, clucks and the occasional billy goat bleat filled the chilly air at Peaceful Fields Sanctuary, a nonprofit rescue for farm animals on 13 acres off the beaten path in Frederick County.

Mari Kelly had made the 100-mile drive from her home in Fredericksburg to this mix of pasture, pens and free-range yard especially to check on three new arrivals: Bruce, Rosie and Mondo.

The turkeys are alive and pecking today because Kelly saw a Facebook post a few weeks back from a Stafford County farmer who offered up the pictured three birds for sale and slaughter in time for Thanksgiving dinner.

Kelly, a vegan who believes every life on Earth is precious, said she was deeply moved by the turkeys’ plight and knew she had to save them.

“I saw their little faces and thought that I must do something,” she said. “I thought to myself that I can’t save the world, but I can save these turkeys.”

Long story short, she purchased the birds for their advertised price, but things got complicated when she began looking for a place for the birds to go live out their natural lives.

“I started a Google search and ended up calling more than 35 farms and sanctuaries without finding anyone willing to take in the turkeys,” Kelly said. “And then I heard about Peaceful Fields, and the rest is history.”

Kelly and Peaceful Fields founder John Netzel talked at length about how the three turkeys could join the nearly 70 turkeys, chickens, ducks, goats, pigs and other animals there. The sanctuary founder said all the “residents” have been rescued from the “cruelty, neglect and abuse” of animal agriculture.

Last week, Kelly and her neighbor Phil Solow — who drove the three turkeys to Peaceful Fields on a wet and breezy day a few weeks earlier — trekked to the sanctuary to see how the trio was faring.

“Oh, look at you, Bruce, you’re so gorgeous. You’re looking so good!” Kelly said. “He’s truly made a remarkable recovery.”

Netzel said that when Bruce arrived, the tom turkey had a respiratory infection, signs of green muscle disease, poultry lice, worms and neurological issues, to the point where “we weren’t sure he was going to make it.” But after he was given a warm bath and medicine and quarantined for days in a warm indoor coop, he was feeling much better and ready to enjoy the outdoors.

The two others arrived in better shape, and after baths and a check by a veterinarian, they took more quickly to their new home.

The founder of the sanctuary founded seven years ago said that most American turkeys raised on large-scale, factory-like farms are bred and fed to gain massive amounts of weight and develop the large breasts that customers want. Because of that, most don’t live past six months. But the three turkeys now have a better chance to live closer to the species’ 10-year life expectancy.

“They’ll always be abnormally large, because they’re bred to be what customers today want, but we’ve got them on restricted diets to counteract that,” he said, noting that the birds would quite literally eat themselves to death otherwise. “Their quality of life here will be night-and-day better than what they’ve experienced to this point.”

Kelly, whose father was a veterinarian and “farmer at heart” who adopted every kind of animal on the family’s farmlet in Tipperary, Ireland, said she knows that it’s a tough sell to convince a large portion of the American population to quit eating turkey.

After noting at Peaceful Fields that her “heart was full” after seeing the three birds she’s fully funded for life there, Kelly said she wishes she could do the same for every turkey out there.

“This Thanksgiving, let’s celebrate with gratitude and compassion for all creatures,” Kelly said.

John Netzel holds Bruce the turkey as the bird is petted by his rescuers, Phil Solow and Mari Kelly.

Mari Kelly of Fredericksburg and John Netzel, founder of Peaceful Fields Sanctuary, look at Mondo, one of three turkeys Kelly bought and sent to the sanctuary in Winchester so they wouldn’t be eaten.

Mondo eyes a visitor to her new home at Peaceful Fields Sanctuary.

Two of the turkeys Mari Kelly saved from a Stafford farm wander around with other sanctuary residents.