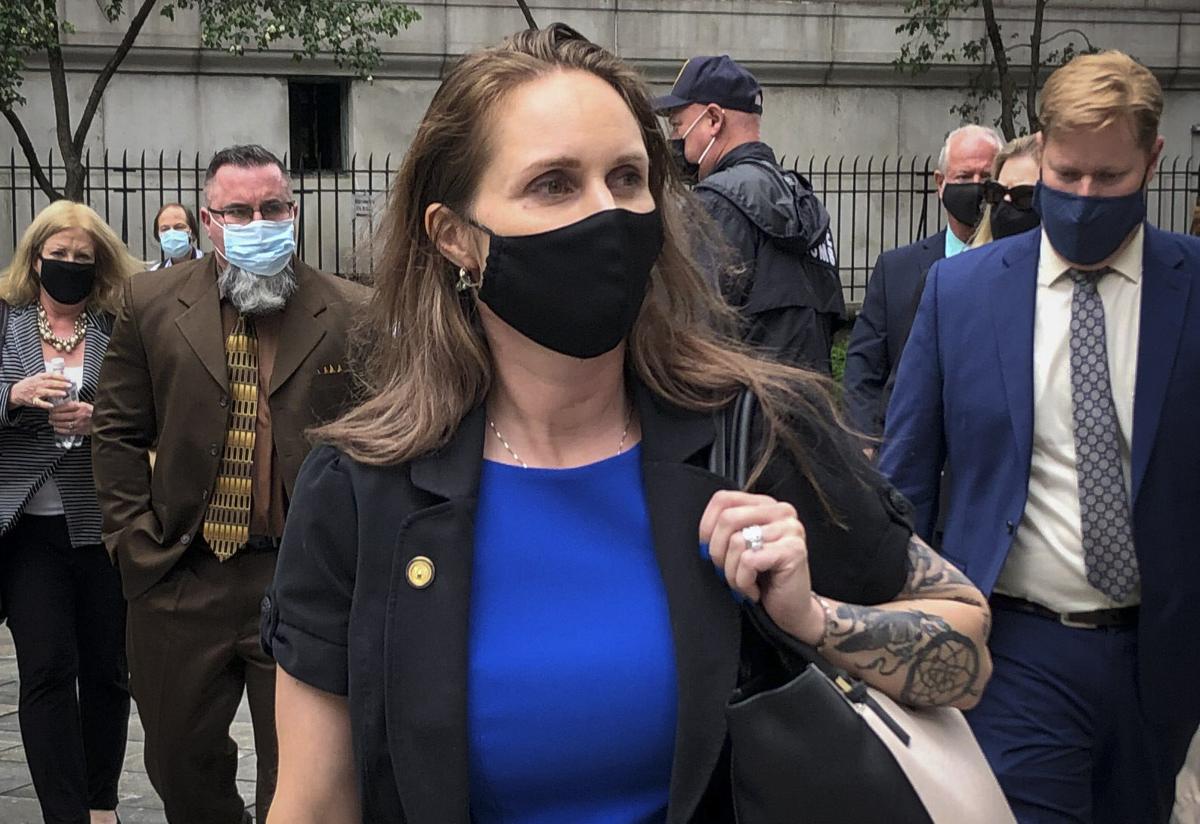 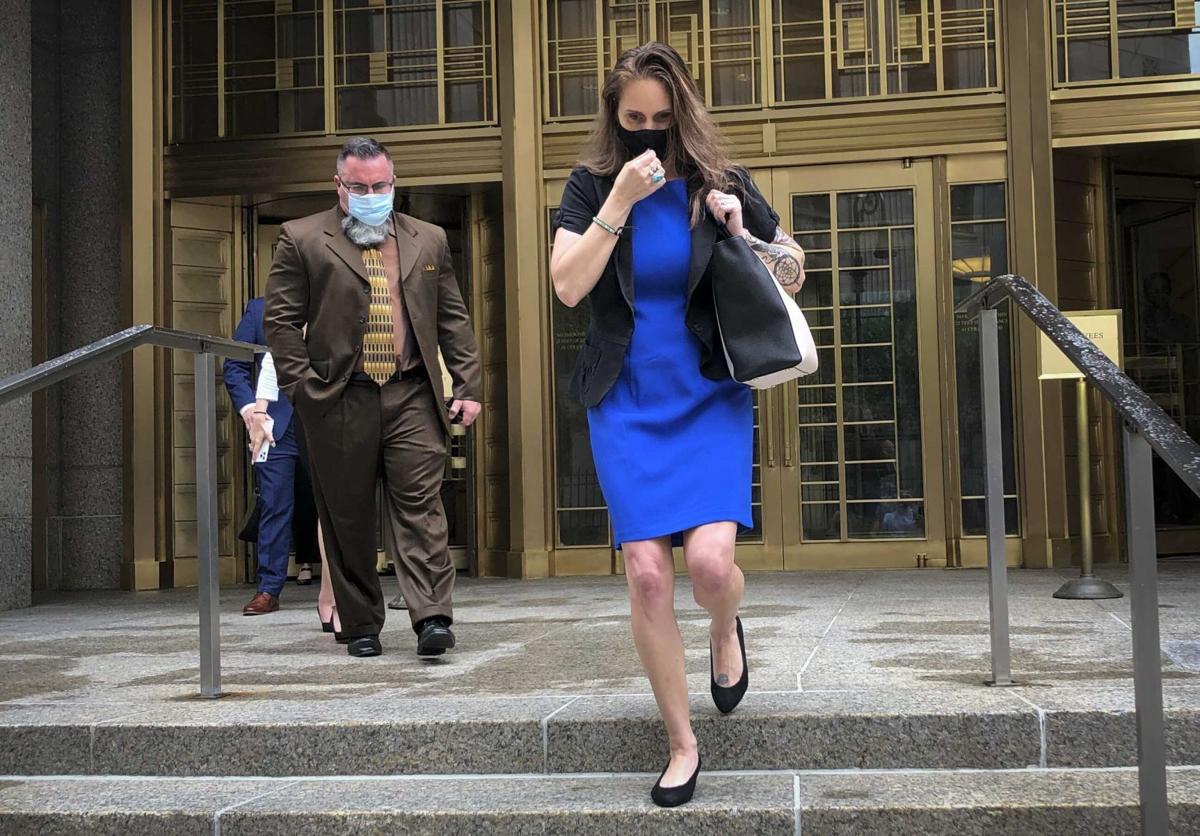 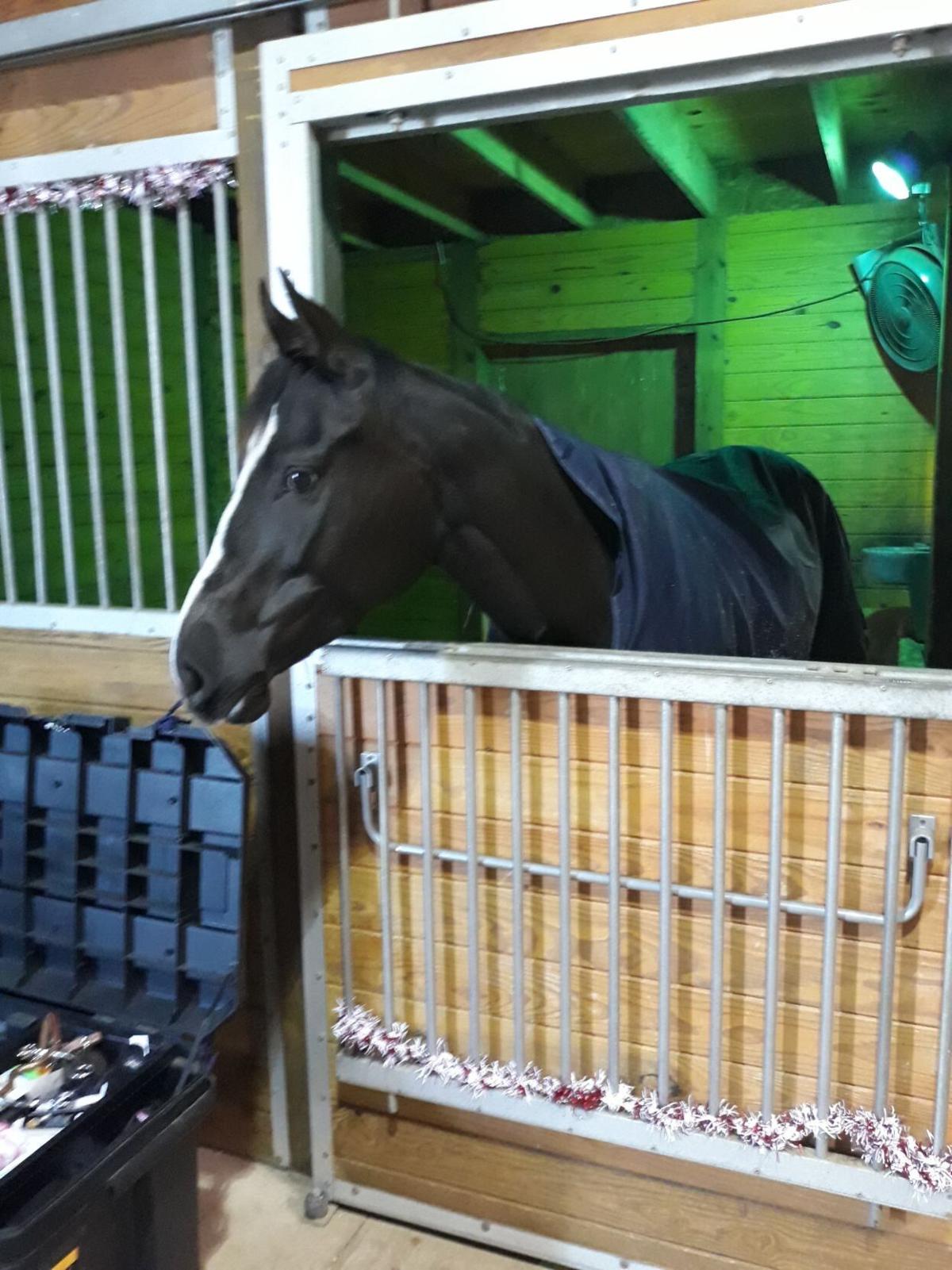 RIGHT: As a result of Edwards’ legal problems, her daughter lost her horse, Diva, which the family could no longer afford to board. Her supporters are raising money for the family online and are asking President Joe Biden to issue a pardon.

When Natalie Mayflower Sours Edwards first suspected wrongdoing, she went to her superior at the U.S. Department of Treasury’s Financial Crimes Enforcement Network. She then complained to the agency’s inspector general, filed a whistleblower complaint and ultimately went to Congress.

When nothing came of it, her lawyer said, she surreptitiously went to the press.

Reporters used the confidential material to reveal “for the first time in forensic detail how powerful global banks knowingly profit from corruption and how authorities around the world allow the dark economy to flourish,” said one of the reporters involved.

In the wake of the reporting, reforms were made around the world, Congress passed the Corporate Transparency Act, and the reporters came close to winning a Pulitzer Prize.

But as the Justice Department last week tightened protections for journalists with a policy against forcing reporters to produce notes or testify against sources in most cases, the Quinton woman prepared for prison.

Barring a last-minute legal challenge or a pardon petitioners are begging of President Joe Biden, the 43-year-old mother will begin a six-month stint on Aug. 2.

“I cannot say I am ready for incarceration. I do not believe anyone would say they are ready,” she wrote in an email to the Richmond Times-Dispatch, before undergoing surgery this month.

Before providing thousands of confidential reports about suspected suspicious activity to a journalist, Edwards lived a low-profile life with her spouse, a retired Richmond police officer, and their daughter.

She was close to her Chickahominy Tribe and its traditions. Edwards worked as a full-time science teacher at L.C. Bird High School while she pursued her master’s degree. In 2007, Edwards became the first member of her tribe to earn a doctorate, wrote her lawyer, Stephanie M. Carvlin, in court filings.

The federal government jobs that followed included a stint at the CIA. Ultimately, Edwards rose to become a $160,000-a-year senior adviser in the Intelligence Division of the U.S. Treasury Department’s Financial Crimes Enforcement Network, FinCEN, an agency she joined in 2014.

She took the job in part because it allowed her to telework and spend more time with her daughter, Carvlin wrote. Many of the dozens of letters written to U.S. District Judge Gregory H. Woods on Edwards’ behalf described a woman committed to put her family first in spite of a job that sometimes required her presence more than 100 miles from home.

Asked why she decided to release the information — thousands of protected Suspicious Activity Reports, SARs, sent between October 2017 and October 2018 — Edwards referred to what she told Woods in New York last month shortly before he handed down a punishment at the severe end of guidelines.

It says, in part: “Your Honor, I am an Indigenous Matriarch Warrior whose spirit cannot be broken. I am from the Algonquin Nation, Powhatan Confederacy, Chickahominy Tribe. I was born a citizen of Turtle Island, commonly referred to as these United States of America in 1978.”

“It was never my intent to be heroic. I was a whistleblower who was to remain anonymous in the shadows. The American people deserved a government employee to uphold [their] oath of office as well as meet the creed of ‘see something say something,’ ” she wrote.

She pleaded guilty to the charge, but complained that authorities have been controlling the narrative. “It’s unfortunate that I am being called a lawbreaker,” she wrote.

Jail was not the outcome Edwards expected when she began making noise about what she believed to be improper conduct at the Treasury Department that risked national security.

She believed the proposed transfer of some employees from FinCEN to the Treasury Department’s Office of Intelligence Analysis was illegal and that the department was giving false and misleading statements to Congress, Carvlin wrote.

Believing Treasury Department officials were not adequately responding to her complaints, she brought her allegations to Congress and met with staff members of the House Permanent Select Committee on Intelligence, her lawyer said. “When Congress’ attention to the issues May believed vitally affected the security of this country flagged, she then began communicating with Jason Leopold.”

She first met Leopold, a senior investigative reporter for BuzzFeed News, in July 2017. “He told her that he shared her concern for national security. He assured her that the only way to revive Congressional interest was through media attention,” Carvlin wrote.

Carvlin told the judge that at Leopold’s encouragement, she provided him with suspicious activity reports and other internal Treasury Department documents. “He wrote the articles that disclosed that information.”

Edwards gave Leopold SARs and other material used in the “FinCEN Files,” a reporting project conducted by BuzzFeed News and the International Consortium of Investigative Journalists that was released last September.

“Natalie Mayflower Sours Edwards saw evidence of massive global wrongdoing and risked her freedom to make the public aware of both the misconduct and the numerous failures to thwart it,” ICIJ Director Gerald Ryle said after her sentencing. “Her actions and our reporting have sparked unprecedented international reform.”

Not so, says the government. Prosecutors said Edwards knew she was breaking the law, that the protected material she disclosed was not related to the misconduct she alleged was taking place at the Treasury Department, that her motives were far from pure and that the disclosures caused damage to FinCEN.

The U.S. attorney’s office argued, “That she may have believed, incorrectly, at one time that FinCEN engaged in wrongdoing does not explain, much less excuse, her own engagement in wrongdoing.”

Edwards took photographs of reports and texted the images to Leopold using an encrypted application and by other means. She also sent or described to the reporter internal FinCEN emails or correspondence and other information, including Investigative Memos and Intelligence Assessments published by the FinCEN Intelligence Division, prosecutors said.

Prosecutors described the scope of her disclosures as “unparalleled” in the agency’s history.

“Many of these materials related to ongoing investigations of significance, such as those involving Paul Manafort, Richard W. Gates, Russian diplomatic accounts, and other matters associated with the 2016 federal election, as well as financing of Hezbollah and other foreign terrorist organizations, and the activities of countless other persons under potential or actual investigation,” the U.S. attorney’s office complained.

She ultimately pleaded guilty to sharing reports related to figures in the investigation of the 2016 election by former Special Counsel Robert S. Mueller III, but questions the investigation.

“If the government was so concerned about the ‘impact of me exposing criminality,’ why did they not approach me in the beginning instead of secretly investigat[ing] me over a year,” she asked.

Edwards lost her career, her home, a car and her privacy. Her daughter lost her horse, Diva, which the family could no longer afford to board, Carvlin said. Her supporters are raising money for the family online.

Leopold described her actions as heroic.

“She doesn’t belong in jail. She should be celebrated. Her disclosures were in the public interest and led to significant changes throughout the world as it relates to anti-money laundering,” he said in an interview.

Dan Meyer, the former director of the Whistleblowing and Source Protection program at the Office of the Intelligence Community Inspector General, said he was not familiar with Edwards’ case, but that FinCEN’s work plays a crucial role in national security by tracking the laundering of drug or other illicitly obtained money that can fund terrorism directed at the U.S.

“FinCEN is almost as revered ... as the CIA and NSA. For any whistleblower to come forward from those three agencies, you really need to proceed with caution,” said Meyer, now managing partner at the Washington law firm of Tully Rinckey PLLC.

Disclosure of protected material by a federal employee, at an intelligence agency or not, needs to be made through the formal whistleblower process. If it is not, he said, “You are at that point a leaker. The difference between leaking and whistleblowing — whistleblowing is a lawful disclosure, leaking is an unlawful communication.”

Prosecutors complained that Edwards made “sweeping, generalized claims” about whistleblowing and broadly asserts that she has been prosecuted for revealing policies and practices that were putting American lives at risk.”

Edwards’ concerns about alleged improprieties at the Treasury Department were investigated by the department’s inspector general’s office, which found no wrongdoing, prosecutors said.

“She did not need to use [Leopold] as some kind of secret intermediary. But even if she did, that still does not explain her conduct. Not a single one of the defendant’s claims of alleged wrongdoing by FinCEN involved the detailed personal information contained in a SAR,” they argued.

Authorities cited some of the communications between Edwards and Leopold to support its allegation that Edwards’ motives included disrupting the Mueller investigation, her own personal advancement and harming FinCEN.

Edwards told The Times Dispatch that her motive was accountability. “That was my intent and sole purpose as a whistleblower. To hold those responsible for the corruption.”

Carvlin conceded in Edwards’ sentencing memorandum that her client was not authorized to disclose the material and that what she did was illegal. However, “She got no benefit from providing information to the media.”

Edwards wrote that she resigned her FinCEN job and is seeking federal retirement disability and Social Security disability. She recently had surgery at VCU Medical Center to remove a lesion in her neck and is undergoing neurofeedback treatment three times a week.

She said she suffers from post-traumatic stress disorder, anxiety, insomnia and depression in addition to her physical ailments.

Since her arrest in 2018, she volunteered to help all seven federally recognized Native American tribes in the state establish the Virginia Tribal Education Consortium to educate youth on the culture and heritage of Native Americans.

In a June 11 guest opinion piece in The New York Times, Mark Schoofs, editor in chief of BuzzFeed News, wrote that Edwards should be pardoned.

Schoofs noted that on the same day Edwards was sentenced, “President Biden vowed to make global financial systems more transparent so that individuals and organizations engaged in corruption would find it harder to ‘shield their activities.’ ”

The prosecutions of individuals like Edwards, he argued, “reveal a fundamental contradiction in how the United States — home of the First Amendment and laws to protect whistle-blowers — treats the sources that make a robust press possible. The government has generally avoided prosecuting journalists. But it seems to feel no compunction about going after the people who give journalists their information.”

Correction: A previous version of this story incorrectly reported that Natalie Mayflower Sours Edwards was the first member of the Chickahominy Tribe to win a degree from a university not run by Native Americans. Several members of the tribe have received such degrees prior to Edwards, including himself, said Stephen Adkins, chief of the tribe.

RIGHT: As a result of Edwards’ legal problems, her daughter lost her horse, Diva, which the family could no longer afford to board. Her supporters are raising money for the family online and are asking President Joe Biden to issue a pardon. 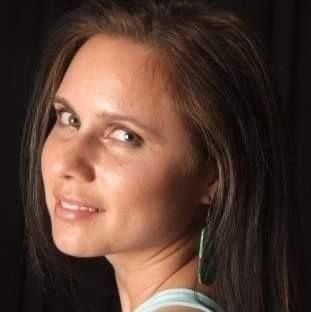