Chief Justice Donald W. Lemons on Wednesday advised Gov. Ralph Northam and Gov.-elect Glenn Youngkin, along with top legislative leaders in the General Assembly, that he plans to retire Feb. 1 from the Virginia Supreme Court, just two days after the court announced he’ll step down as chief justice at year’s end.

“It has been my honor and privilege to serve the judiciary and the citizens of the Commonwealth of Virginia for more than 25 years,” Lemons, 72, said in a letter dated Wednesday and copied to Lt. Gov. Justin Fairfax, Lt. Gov.-elect Winsome Sears and the outgoing and incoming Speakers of the House of Delegates, among others.

Lemons has not stated publicly why he is retiring, but he will reach the mandatory retirement age for state judges and justices when he turns 73 on Feb. 22. But he could serve for 11 more months after turning 73, according to state law, which says any judge or justice who turns 73 “shall be retired 20 days after the convening of the next regular session of the General Assembly.”

The legislature already will have commenced its 2022 session in January before Lemons turns 73. “So the next General Assembly session wouldn’t begin for 11 more months — in January 2023,” said L. Steven Emmert, a Virginia Beach appellate attorney and publisher who focuses on the Virginia Supreme Court. “So if he wanted to [stay], he could.”

“My best guess is that he just decided it was time” to leave, Emmert said. Several efforts to reach Lemons for comment have been unsuccessful.

Emmert said Justice Lawrence L. Koontz Jr. was the last member of the court to have “aged off,” leaving in February 2011 after he turned 70 — which at the time was the mandatory retirement age. The law changed in 2015, boosting the age to 73. Koontz remains a senior justice of the Supreme Court and can serve in a temporary capacity.

On Monday, the court announced that Lemons was stepping down Dec. 31 as chief justice, and that his colleagues had elected Justice S. Bernard Goodwyn, 60, to succeed him on Jan. 1. At the time, it appeared Lemons would stay on the court and take the unprecedented step of being the first person ever to leave the chief’s seat and move to the second-most-senior position on the court.

Lemons was first elected to the court in 2000 and has served as chief justice for seven years.

Emmert noted that Lemons had the difficult task of presiding over all of Virginia’s judicial systems during the on-going COVID-19 pandemic and administering its effect on the courts statewide.

“The court had to sort of manage the closure of courthouses and then the process of resuming jury trials, without bringing jurors into a pandemic situation,” Emmert said. “So [Lemons] is ultimately responsible for that. He’s not just the titular head of the court systems, he’s the actual head of all judicial systems in Virginia. So he’s had that on his shoulders.”

Emmert said Lemons’ legacy, in terms of what he chose to emphasize as chief judge, could be summarized in one word: professionalism.

“That was his primary consideration in terms of the things he wanted to emphasize the most,” Emmert said. “You can hear what the [chief] justice cares the most about if you attend a court session in which new members of the court are sworn in. With Chief Justice Lemons, he always emphasized the importance of professionalism.”

“Not just ethics — not just not stealing from the client or not lying to the court — but being a real professional,” he added. “It will be interesting to see what the next chief justice” emphasizes.

A criminal complaint and arrest warrant reveal new information about how a Collinsville woman came to be among those arrested for alleged rioting at the U.S. Capitol. 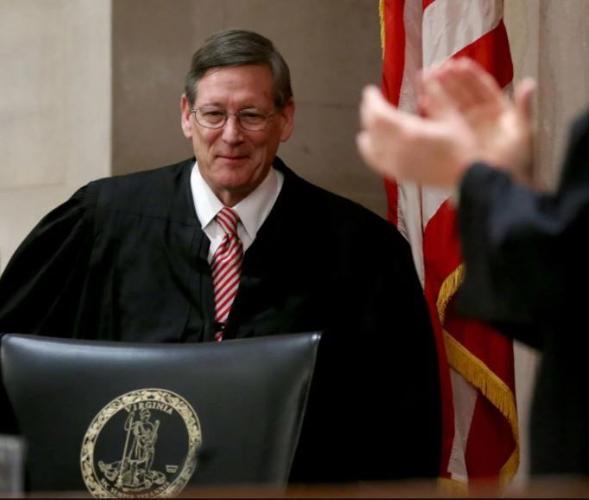