COVID-19 cases spike in Virginia: 'The fact that it is happening before Thanksgiving is terrifying'
72 comments
Share this
{{featured_button_text}}
1 of 3 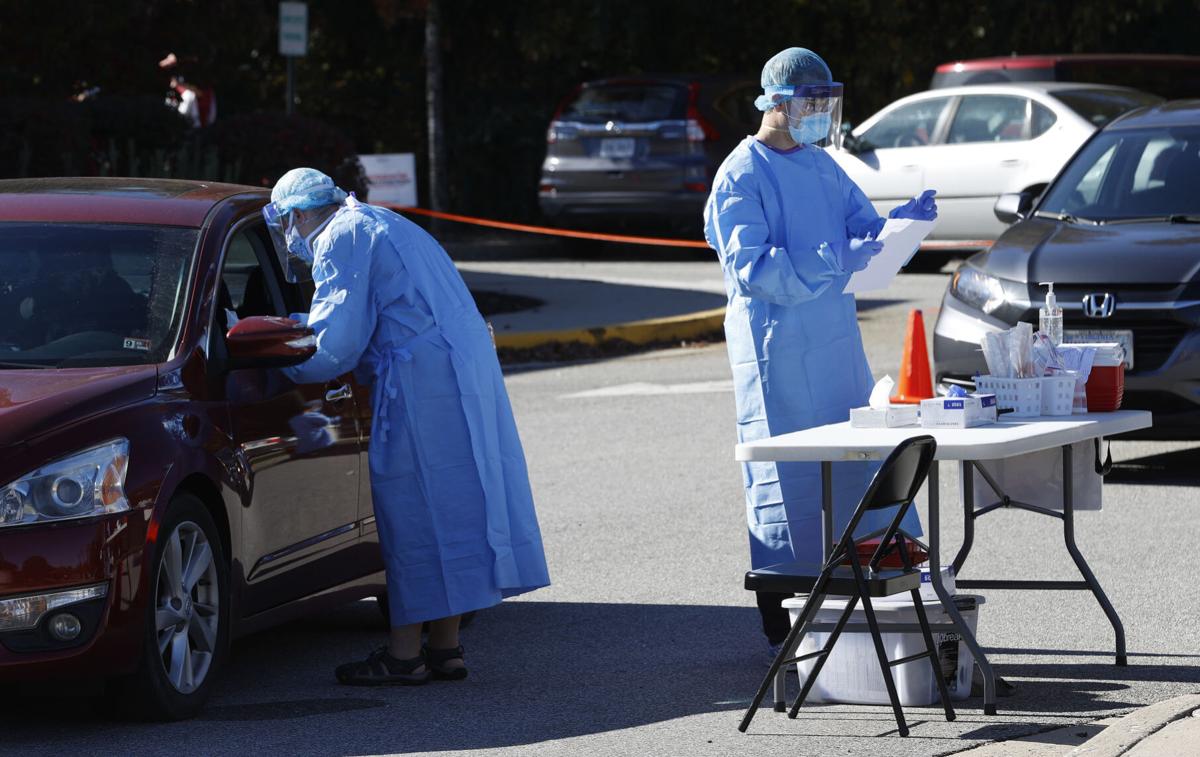 People receive COVID-19 tests during a drive thru at the Eastern Henrico Health Department Monday, November 9, 2020. 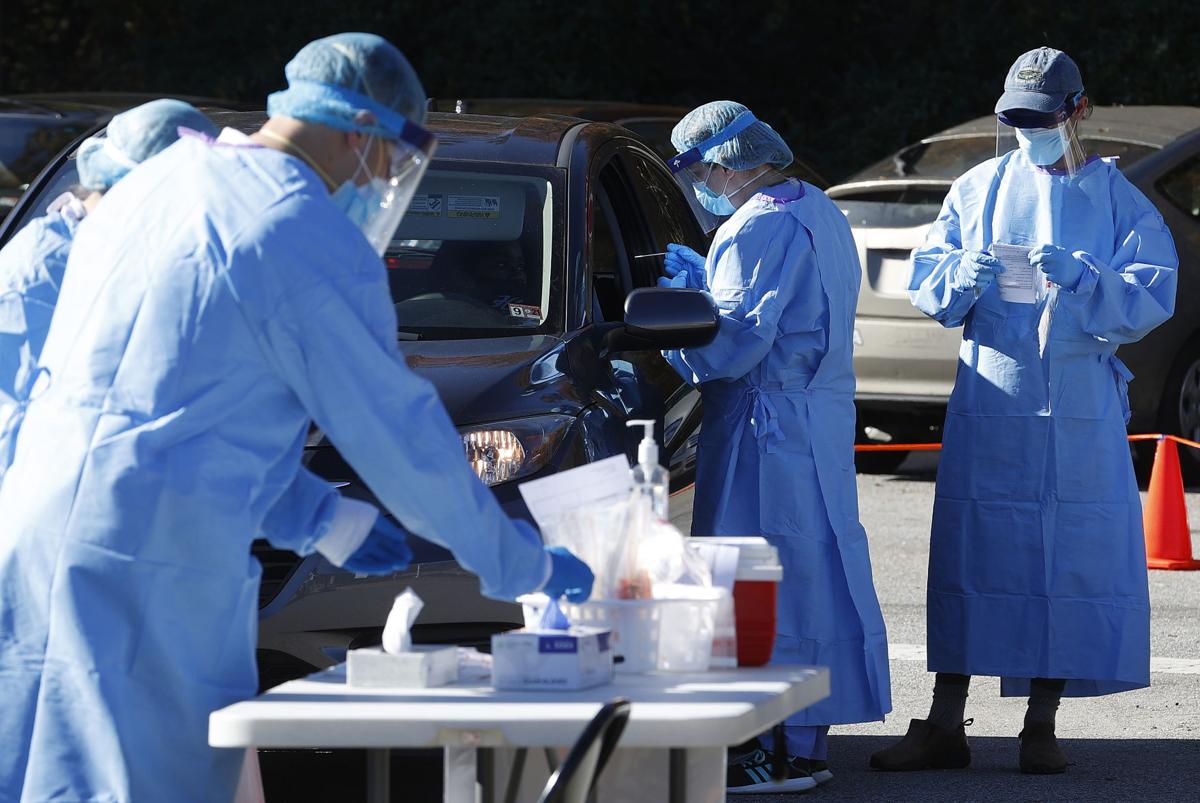 People receive COVID-19 tests during a Va. Dept. of Health drive thru at the Eastern Henrico Health Department Monday, November 9, 2020. 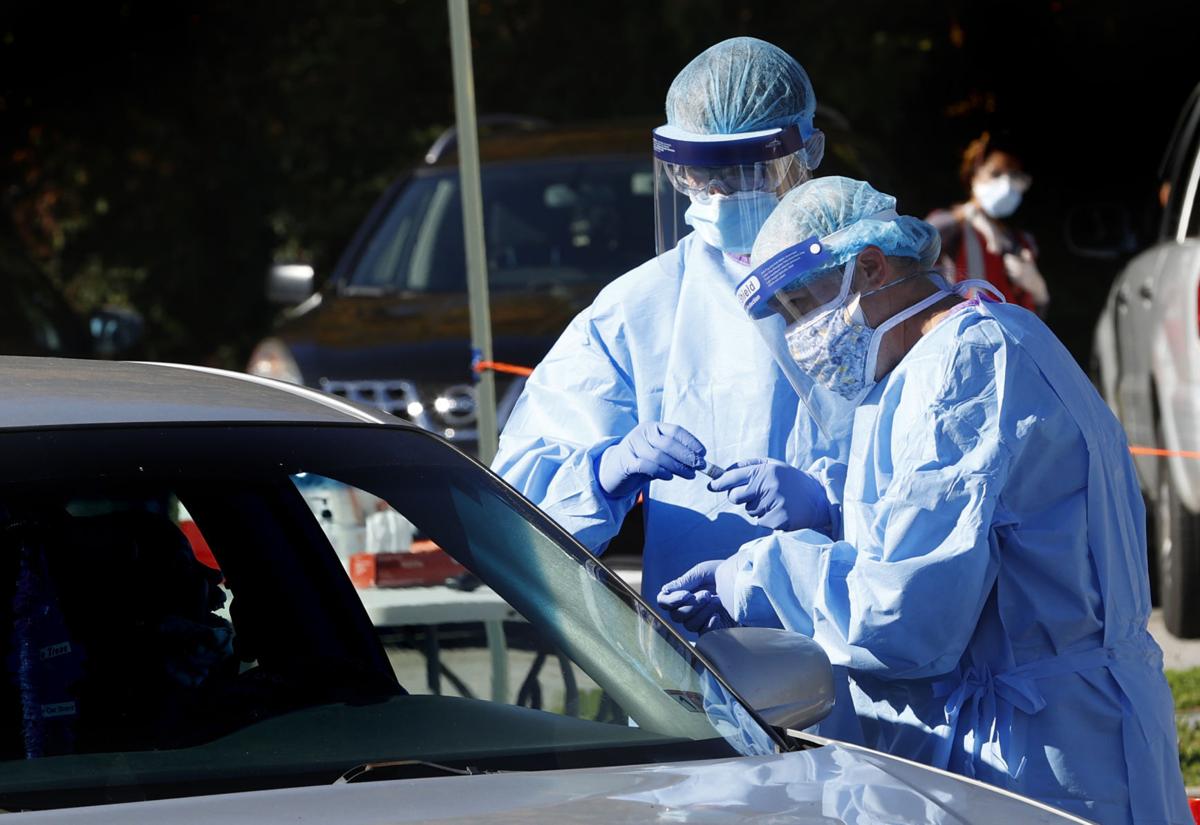 People received COVID-19 tests at the Eastern Henrico Health Department earlier this month. New daily cases in Henrico County are the highest seen since the start of the pandemic.

A holiday-time surge of COVID-19 cases seemed inevitable, but not this soon.

Over the last week, Virginia has averaged 2,010 new COVID-19 cases per day, more than double the number of daily cases the state reported this time last month. More than 7% of everyone tested for COVID-19 in the state over the last week was carrying the virus, up from 5% a month ago.

Less than a week before Thanksgiving, all of the trend lines point upward — cases, hospitalizations, deaths — leaving health officials in Virginia, the federal government and around the country scrambling to persuade people to stay put for the holiday.

“We had been doing relatively well and had incidences go down. We were all looking at the holidays as a possible time when cases might go up, but I think the pace of this increase is, if you want an emotion, disappointing,” said Virginia Health Commissioner Norman Oliver in an interview.

Unlike the start of the pandemic, when little testing and knowledge of the virus allowed it to spread, public health officials say the current surge is driven by fatigue toward the guidelines — relaxed individual behaviors leading to outbreaks and community spread.

It all seemed to happen quickly. Gov. Ralph Northam, during a news conference on Nov. 10, urged Virginians to avoid small gatherings that thwarted COVID-19 restrictions, but eschewed the idea of public restrictions and bid the press corps goodbye until after the Thanksgiving holiday.

Three days later, Northam said images of hospitals in other states overflowed with dead bodies prompted him to tighten public restrictions statewide for the first time since the pandemic started — illustrating the kind of setback that has befallen Virginia.

Such overflows, however, aren’t taking place in Virginia right now, where hospitals continue to operate below their capacity despite a surge in cases. As of Friday, around 13,000 of the state’s 16,000 hospital beds are occupied, well below the state’s 20,000-bed surge capacity.

The Institute for Health Metrics and Evaluation at the University of Washington, which has produced COVID-19 projections throughout the pandemic, isn’t currently projecting that Virginia’s hospitals will become overburdened through the start of 2021.

The number of deaths reported daily in Virginia has also seen an uptick. A month ago, the state had reported around 16 deaths per day; that number is now 18. (Surges in deaths typically lag 20 days behind surges in infections. The deadliest day of the pandemic in Virginia was Sept. 20 with 42 deaths.)

By Christmas, the IHME is projecting 36 people will die every day from COVID-19 in Virginia, a trend that it projects will hold through February — claiming about 2,300 lives. If public restrictions start to ease, the center projects daily deaths will climb from 36 per day around Christmas to 56 by the beginning of March.

Those patients are contributing to staffing shortages across the state’s hospitals, where health care workers exposed to the virus are at times out of commission for two weeks.

“When you start to see all of these clusters, it impacts what is happening in the hospital setting. We know that with this being a community acquired disease, that our staff who work in the hospital might go home to a partner that was exposed to a job outside of the health care setting,” said Dr. Allison Baroco, an infectious disease specialist at Augusta Health, a hospital system in the state’s northwest region, which is experiencing its biggest COVID-19 surge since the start of the pandemic.

The region reported an average of 324 new cases per day over the last week — its highest ever — and has a positivity rate of 5.6%.

The most dramatic surge in the state has been brewing for weeks in Southwest Virginia, but all of the state’s regions are now logging spikes.

The southwest region averaged 529 new cases per day over the last week, with a positivity rate of 10.8%.

The World Health Organization advises governments to maintain positivity rates in any given population below 5% — the bar that confirms enough people are being tested to catch outbreaks and accurately map the disease.

In the state’s central region, which includes Richmond, health officials reported an average of 284 new cases per day, with a positivity rate of 5%.

Richmond and Henrico Health Director Danny Avula said that particularly in Henrico County, new daily cases are higher than the locality has seen since the start of the pandemic.

Avula said this surge is different from surges past. “It’s younger, healthier people” who have become infected, he said, as a result of relaxed, “lazier” behavior related to mask wearing and social distancing.

“The concerning news is that as we see cases surge, there are circles of exposure and transmission that will ultimately impact our vulnerable populations again,” he added. “I think the surge will continue through January. That’s why you hear public health officials sounding the alarm.”

That the surges are happening before either of the major holidays at the end of the year is cause for concern in Virginia and elsewhere, and are driving the restrictions in place in Virginia and the guidelines being issued nationally.

Virginia still remains among the states better off. The Midwest as a whole is experiencing the most severe outbreaks, while parts of Texas and New Mexico are suffering as well.

Nationwide, states reported more than 187,000 new cases on Friday, a 73% jump in two weeks, according to an analysis by The New York Times. Reported deaths amounted to 1,962 people, a 63% increase from two weeks ago.

“We all anticipated people would be traveling, so two weeks after Thanksgiving, we’d see a rise in cases. The fact that it is happening before Thanksgiving is terrifying,” Baroco said.

“If people don’t mitigate their risk, we’re certainly going to see a rise in cases after the Thanksgiving holiday. This is not a problem that is related to any particular region. The whole state essentially is being strained, and this is a national trend as well.”

Virginia is now under a rule limiting public and private social gatherings to 25 people, and banning the sale of alcohol for on-premises consumption past 10 p.m. Asked about the possibility for more restrictions, Northam said “all options are on the table.”

Meanwhile, the federal Centers for Disease Control and Prevention on Thursday urged Americans to avoid traveling for Thanksgiving and spending the holiday with people outside of their immediate household.

“Amid this critical phase, the CDC is recommending against travel during the Thanksgiving period,” said Henry Walke, a COVID-19 expert at the agency, during a press briefing, adding that officials are “alarmed” by the surge in cases in the U.S.

The new restrictions and guidance coincided with uplifting news from two pharmaceutical companies developing COVID-19 vaccines, Pfizer and Moderna, which reported successful large-scale trials of their shots. The vaccines are now moving through the federal review process and could become available to priority groups before the end of the year.

In the meantime, the nation and the state will need to ride out the current surge and any that follow before the vaccine is administered widely, which could take months.

In Virginia, the state is getting ready to deploy what it calls a “regional surge center” — a team of 60 people that will provide additional contact tracing backup to local health districts as they grapple with surges.

The center consists of five teams of 12 contact tracers — one team for each region — and is expected to go online by mid-December.

“These individuals would be able to provide support to local health departments that needed assistance, because they may be encountering a surge of cases that just exceeds their ability to respond quickly,” said Seth Levine, an epidemiologist with the Virginia Department of Health. “We definitely are anticipating surges. We’ve encountered surges during the pandemic so far, and currently, we’re encountering a third.”

The town government says the officers' status was changed from administrative leave to suspended without pay on Friday and no further statement will be made until Tuesday.

FanDuel launches Virginia sports betting in partnership with Washington Football Team; move is seen as enticement for a new stadium

With 52 deaths and almost 500 active COVID-19 cases, the Virginia Department of Corrections is offering inmates who get vaccinated free email …

People receive COVID-19 tests during a drive thru at the Eastern Henrico Health Department Monday, November 9, 2020.

People receive COVID-19 tests during a Va. Dept. of Health drive thru at the Eastern Henrico Health Department Monday, November 9, 2020.

People received COVID-19 tests at the Eastern Henrico Health Department earlier this month. New daily cases in Henrico County are the highest seen since the start of the pandemic.