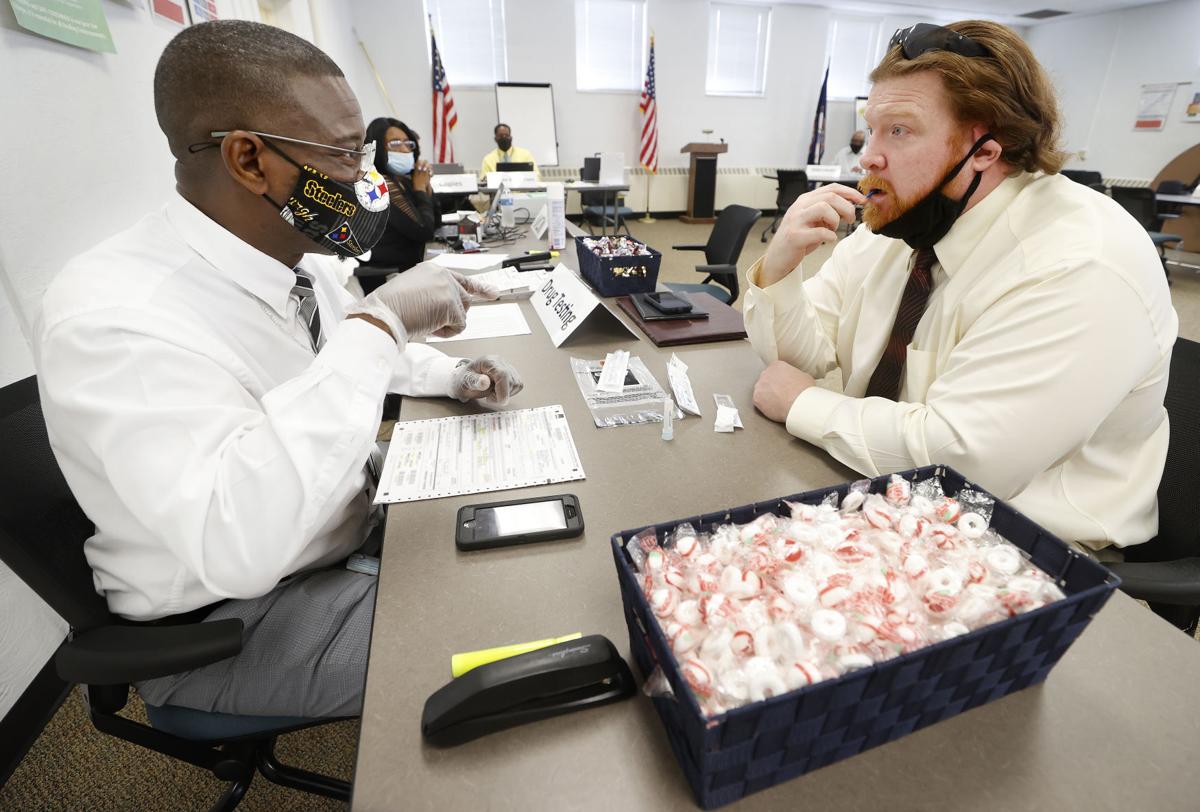 ABOVE: Alphonso Boone (left), a recruiter for the Greensville Correctional Center, facilitated a drug test for Shane Perry on Tuesday during a job fair at the Deerfield Correctional complex in southeastern Virginia. BELOW: Michael Peebles, a state prisons recruiter, helped Leatesha Williams apply for a job during the fair. 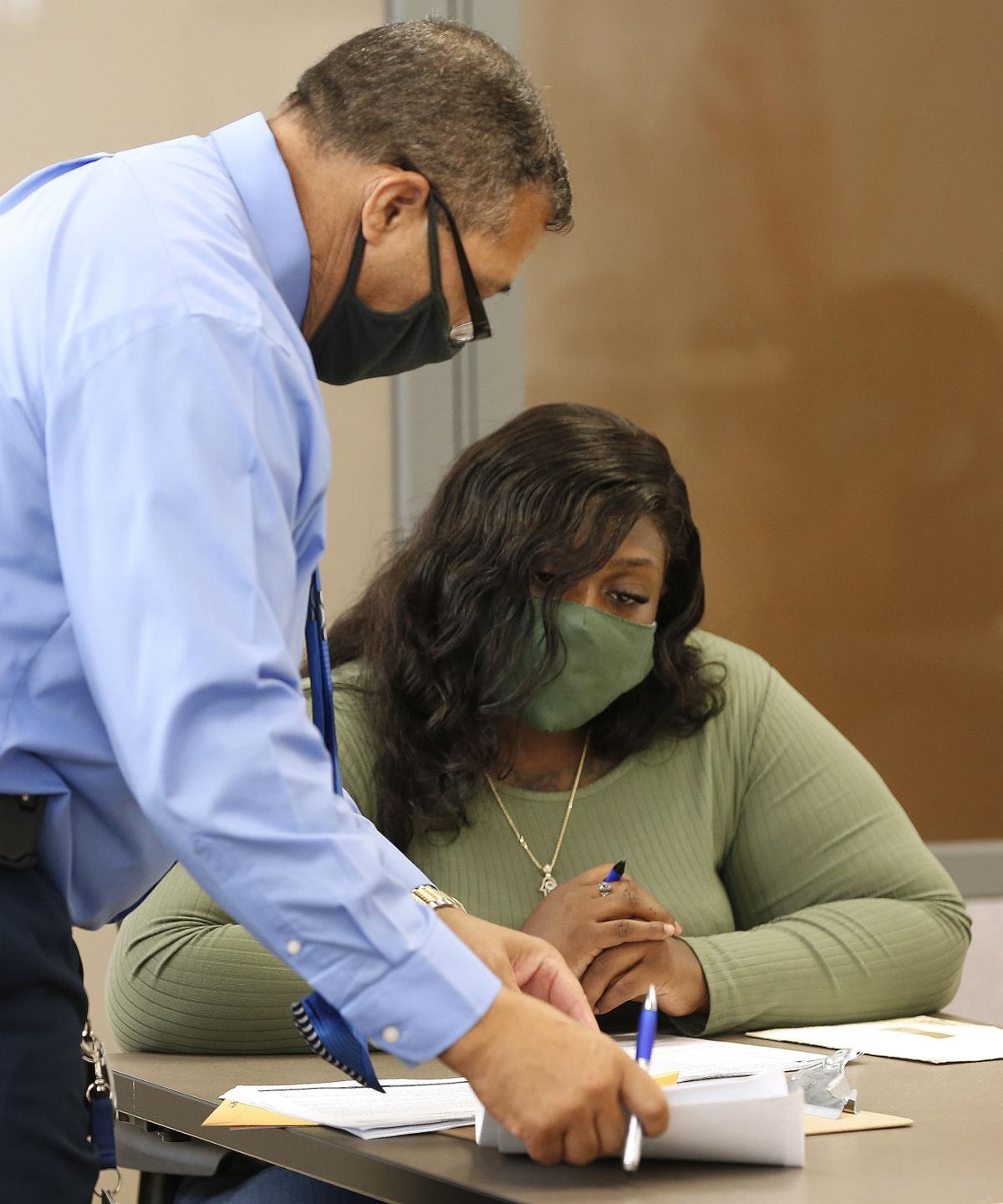 Michael Peebles, a recruiter for the Virginia Department of Corrections, helps job applicant Leatesha Williams with her paperwork at the Deerfield Correctional complex as she interviews for a correctional officer position Tuesday, Sept. 14, 2021. The DOC held a two-day recruitment drive for positions at prisons in Southeast Virginia. 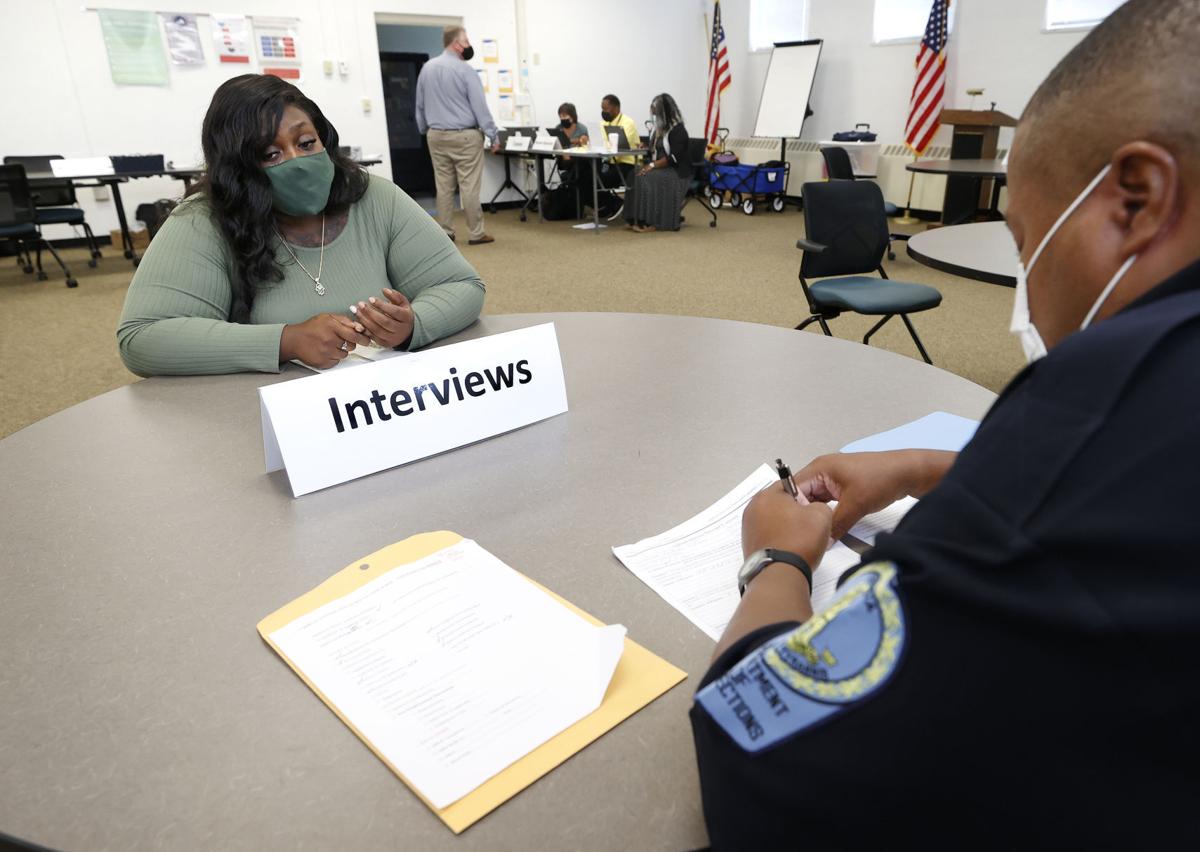 Job applicant Leatesha Williams answers questions for Capt. Stanley Lewis at the Deerfield Correctional complex as she interviews for a correctional officer position Tuesday, Sept. 14, 2021. The Virginia Department of Corrections held a two-day recruitment drive for positions at prisons in southeast Virginia.

CAPRON — Warning of security risks at its facilities, the Virginia Department of Corrections says it is experiencing its worst-ever staffing crisis and is seeking to increase starting salaries by about 25% to better recruit and retain officers.

The DOC says it is facing a shortage of more than 1,600 correctional officers, but the state’s prison population also has dropped — from 30,000 inmates to 24,500 over the past two years, an 18% decrease.

The COVID-19 pandemic, enhanced unemployment benefits, non-competitive salaries, the availability of less demanding jobs and other issues have aggravated the perennially difficult job of recruiting officers. At the end of May, the department had only 5,875 of an authorized 7,265 officer and supervisor positions filled.

The substantial drop in inmate population, however, is temporary, according to DOC officials, who contend they still need full staffing and cannot start shutting down prisons and facilities.

Officials say the staffing shortage jeopardizes security and safety for inmates, staff and the public. Also at risk are inmate activities and services such as education and treatment programs for inmates that reduce their chances of reoffending after release. Religious services, inmate mail and family visits can also be affected.

Jerry Streat’s 38-year career with the DOC began in 1984 as an 18-year-old corrections officer trainee at the troubled former Virginia State Penitentiary in Richmond.

His current job as the department’s recruiter for corrections officers may be the most challenging he has faced. Although there is a signing bonus of $6,000 offered to new recruits, the headwinds against making new hires include low unemployment in Virginia and higher salaries offered at many regional jails and sheriff and police departments.

But Streat is hopeful a corner has been turned with the recent ending of enhanced federal unemployment benefits. On Tuesday, at the start of a job fair near the Deerfield Correctional Center in Capron, more than 60 people had signed up in advance to participate.

“That’s more than we have seen in the last six to eight months,” he said.

Of those who applied, 23 candidates showed up and by the end of the two-day job fair — where applicants were interviewed, given criminal background checks, drug screenings and physicals — all 23 were hired, he said.

If a corner has been turned, it may be in the nick of time.

Figures available from the DOC show turnover is high. As of June this year, 30% of the security staff had been with the state two years or less and 53% five years or less.

Aside from the demands of the job, other agencies paying higher salaries are going after corrections officers, specifically recruiting them in job postings, said prison officials.

Regional jail starting salaries in the state range from $38,000 to more than $41,000. At federal prisons, the salaries start at $43,495, plus recruitment and retention bonuses, according to the Virginia Department of Corrections.

The DOC’s response includes seeking to boost starting pay from just over $35,000 a year to $44,000 and increasing pay for supervisors with higher rank.

In the meantime, the staff shortage has meant that in order to cover essential posts, “drafting” officers to work extra hours has been necessary — 410 officers each day as of June.

Kinney said the drop in inmate population over the past two years is also largely due to the pandemic.

“The population drop isn’t expected to continue. Right now, we have a backlog in the jails. We were also over capacity when we had 30,000 inmates,” she wrote in an email.

She added, “We’ve added beds to cells and dorms over the design capacity over the years. The operational capacity is the maximum number at which we feel we can safely operate the facilities but it’s over design capacity and it’s not ideal. With current inmate numbers, we’re getting back down toward design capacity.”

She said the primary cause was the lack of new inmates being sentenced due to pandemic-related court closings and limited court caseloads combined with a suspension of routine intakes from local and regional jails between March 2020 and this April.

Before the pandemic, as prison inmates were released, they were replaced by new inmates serving state sentences in local jails.

Streat concedes the job corrections officers perform may not be fully appreciated by the public. But he said advantages include “helping the community, keeping the public safe and career opportunities. You can start off an officer and work your way up to warden, a regional administrator.”

“We believe in second chances,” he said, both for inmates and prospective employees who may have a misdemeanor record. A felony conviction, however, rules you out because officers must be eligible to posses firearms.

Among those who showed up in Capron on Tuesday to apply for jobs were Leatesha Williams and Shane Perry, who were hoping for positions at the Greensville Correctional Center in Jarratt and the Sussex I or Sussex II state prisons in Waverly, respectively.

Perry said a friend started working for the DOC six months ago. “She told me it was a good opportunity. She seemed real happy, upbeat,” he said.

“I’ve been thinking about a career change for the last couple of years,” said Perry, a machinist. He cited job security and the benefits as reasons for joining the DOC. “And the signing bonus doesn’t hurt,” he said, smiling.

Williams had worked as an officer in a federal prison in North Carolina and has experience.

“It’s something that I enjoy and that I am good at,” she said. “I’d seen the openings and I was looking for a new position so I decided to apply.”

More than 30% of Virginia corrections officers are women.

“It can be difficult for women,” Williams said. “But as long as you are firm and straightforward, then you shouldn’t have any issues.”

Streat explained that the bonus requires a two-year tenure agreement. After the first 30 days, a new officer gets $2,000. The remaining $4,000 is paid after completing 12 months of training at their facility or at one of three department academies.

Kinney said that in addition to the new hire bonuses, current employees are paid $1,500 bonuses for referrals — $750 when the new officer is certified and then $750 at the end of the new officer’s one-year probationary period.

ABOVE: Alphonso Boone (left), a recruiter for the Greensville Correctional Center, facilitated a drug test for Shane Perry on Tuesday during a job fair at the Deerfield Correctional complex in southeastern Virginia. BELOW: Michael Peebles, a state prisons recruiter, helped Leatesha Williams apply for a job during the fair.

Michael Peebles, a recruiter for the Virginia Department of Corrections, helps job applicant Leatesha Williams with her paperwork at the Deerfield Correctional complex as she interviews for a correctional officer position Tuesday, Sept. 14, 2021. The DOC held a two-day recruitment drive for positions at prisons in Southeast Virginia.

Job applicant Leatesha Williams answers questions for Capt. Stanley Lewis at the Deerfield Correctional complex as she interviews for a correctional officer position Tuesday, Sept. 14, 2021. The Virginia Department of Corrections held a two-day recruitment drive for positions at prisons in southeast Virginia.