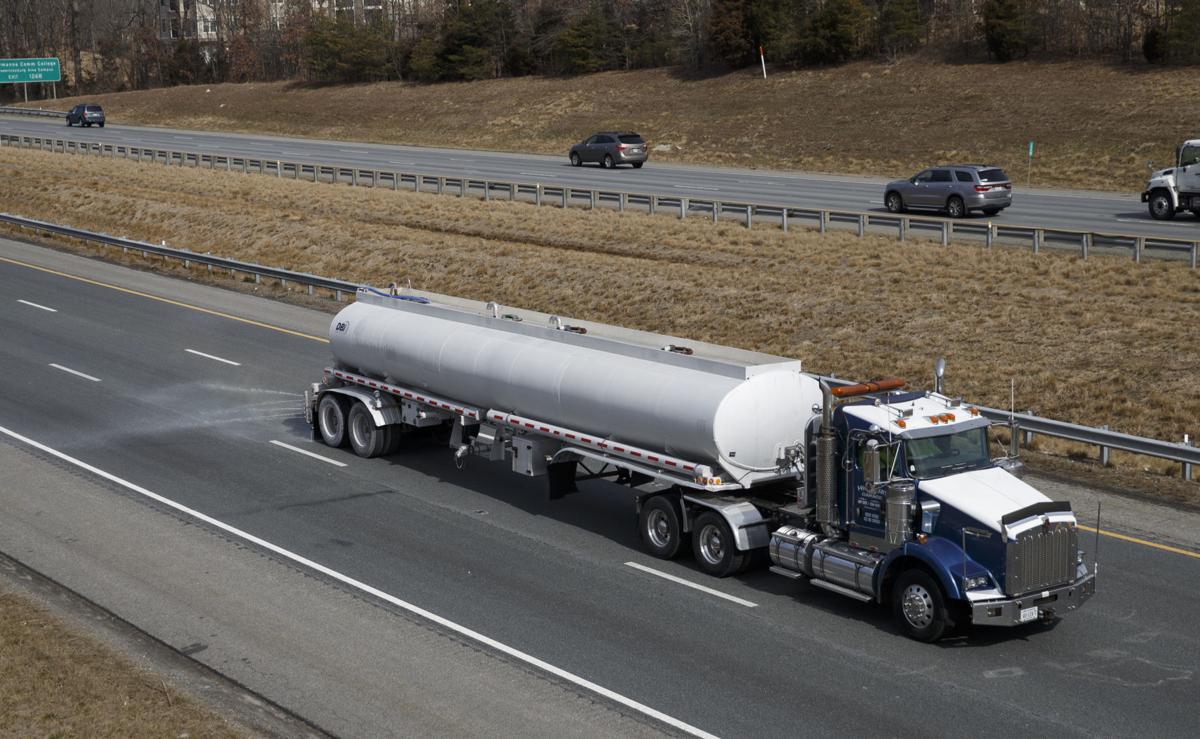 A Virginia Department of Transportation crew prepared for the storm by treating Interstate 95 in Spotsylvania. 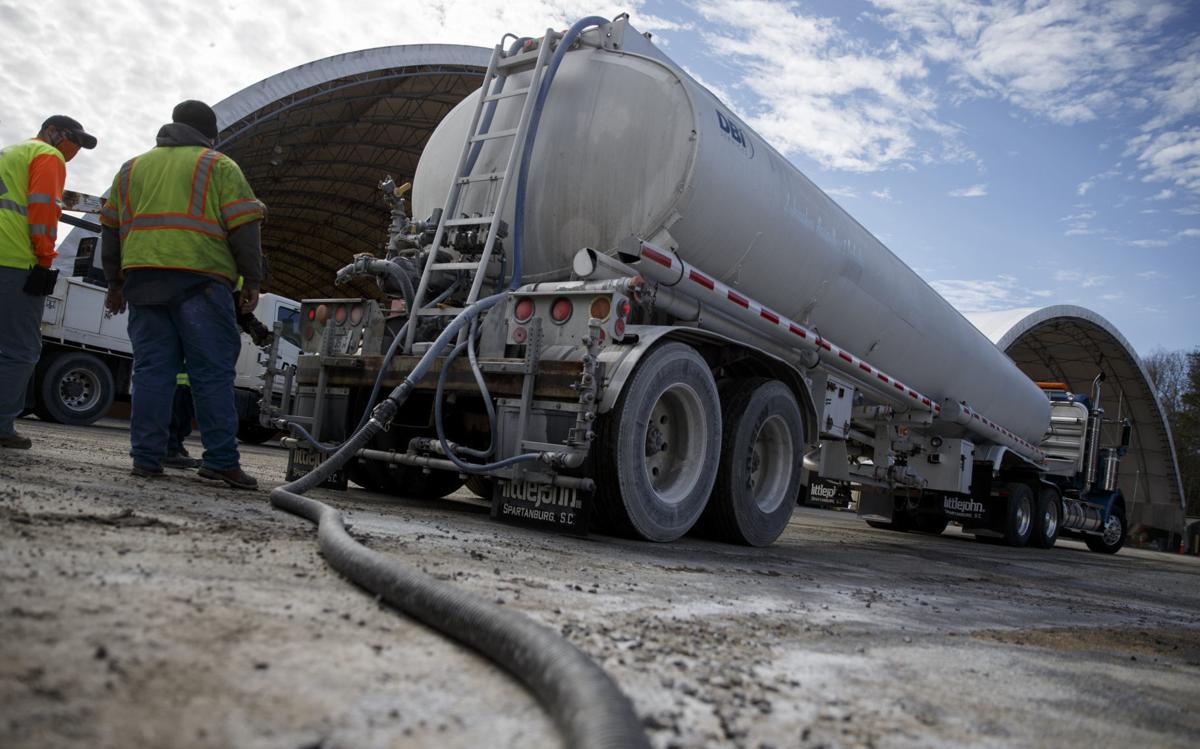 Workers prepared a truck on Wednesday that would treat roads ahead of the storm. 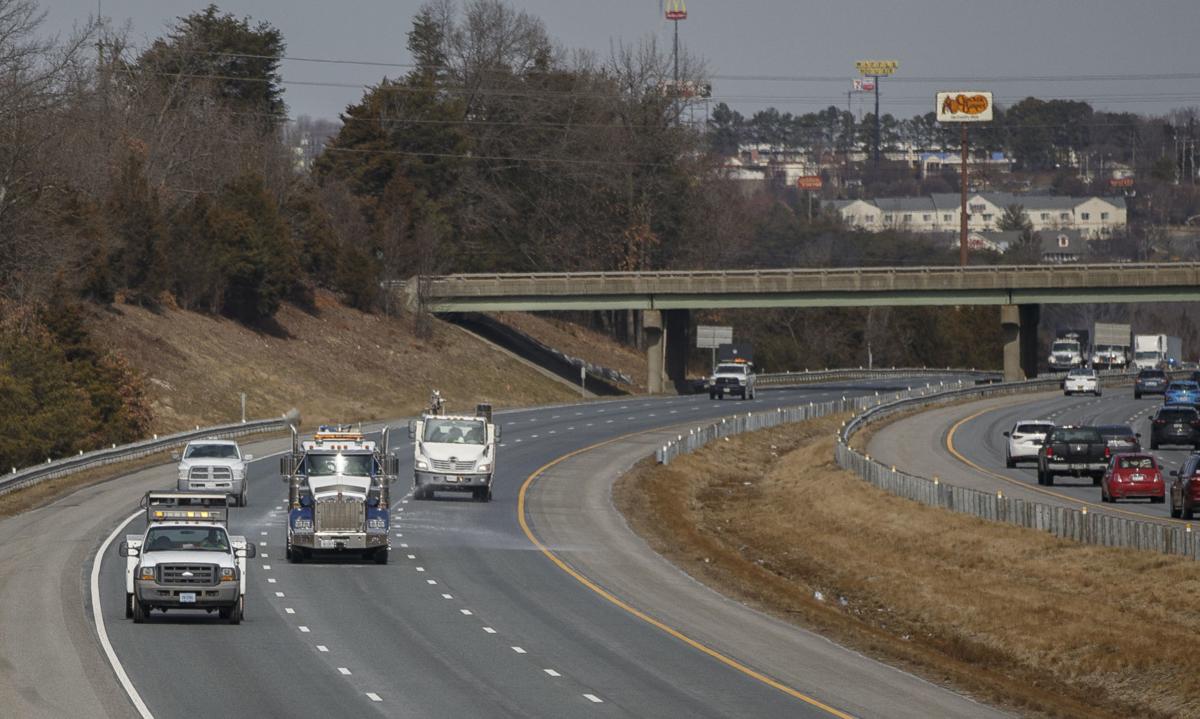 A VDOT crew applies brine to Interstate 95 in Spotsylvania, Va., on Wednesday, Feb. 17, 2021. Roads were being pretreated ahead of the latest storm. 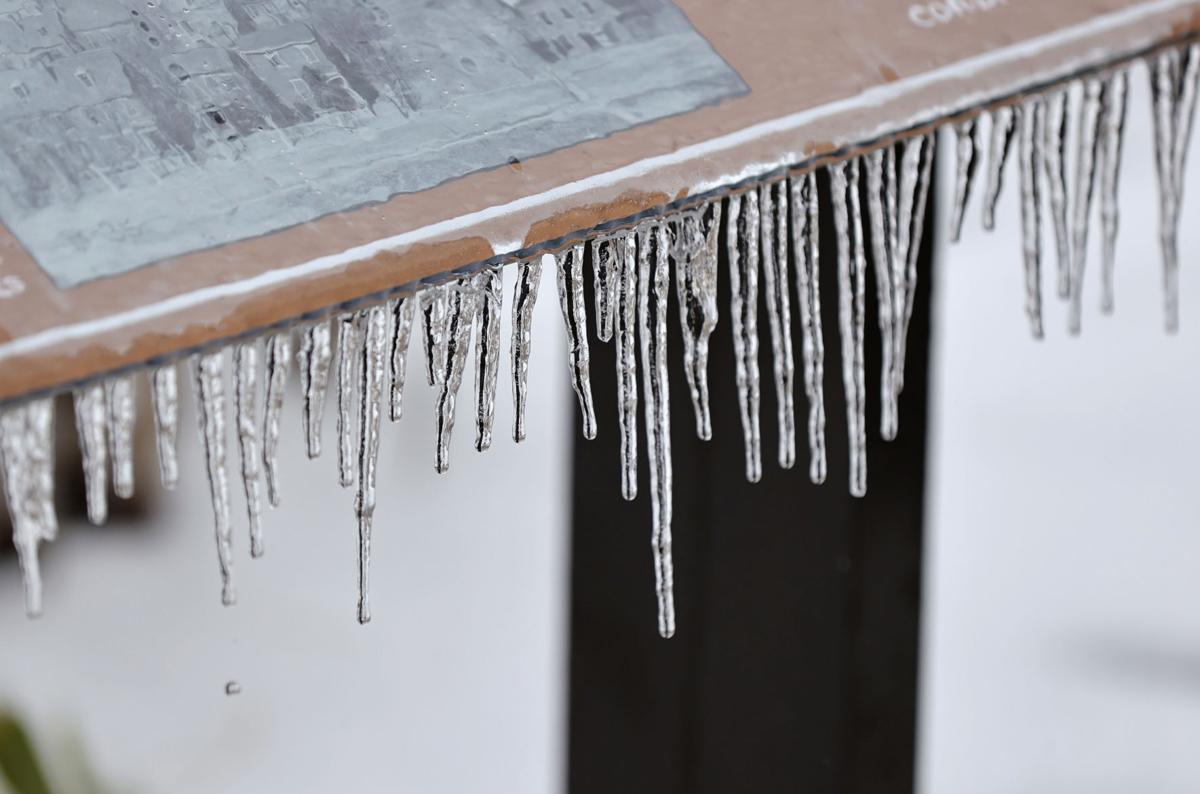 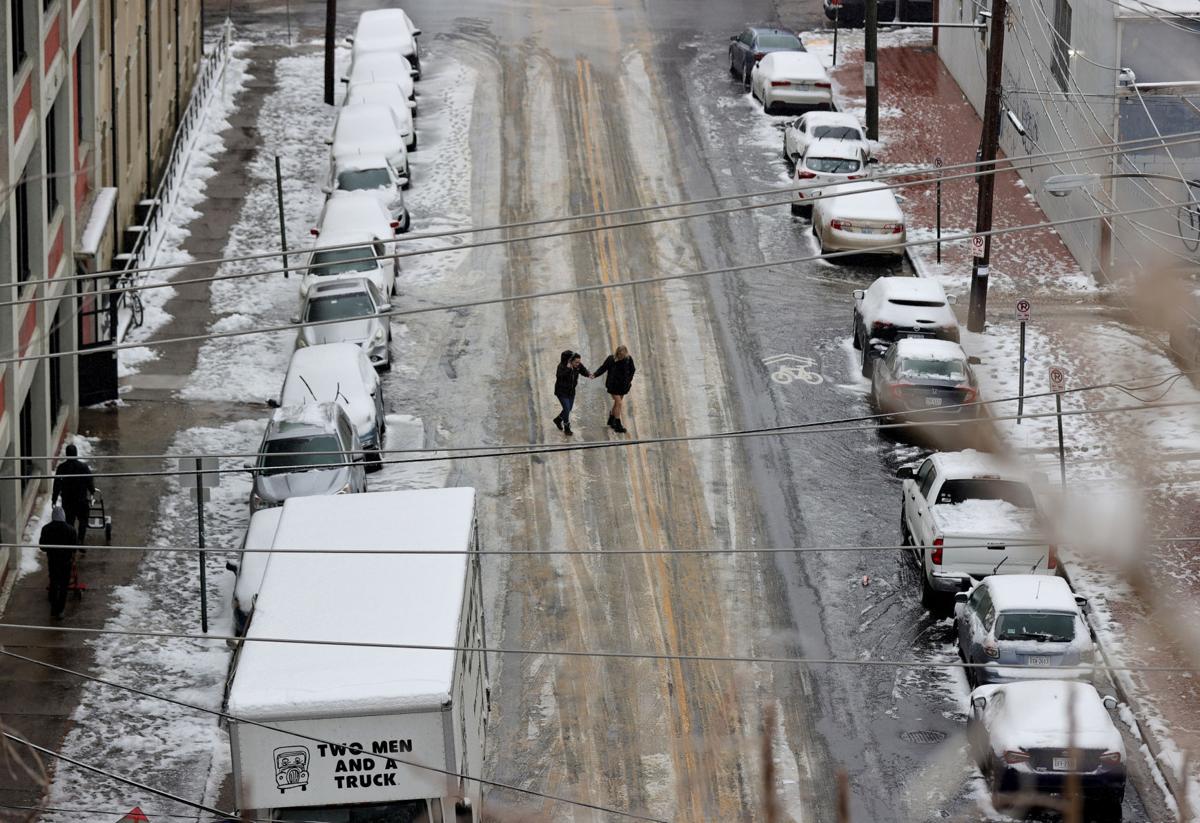 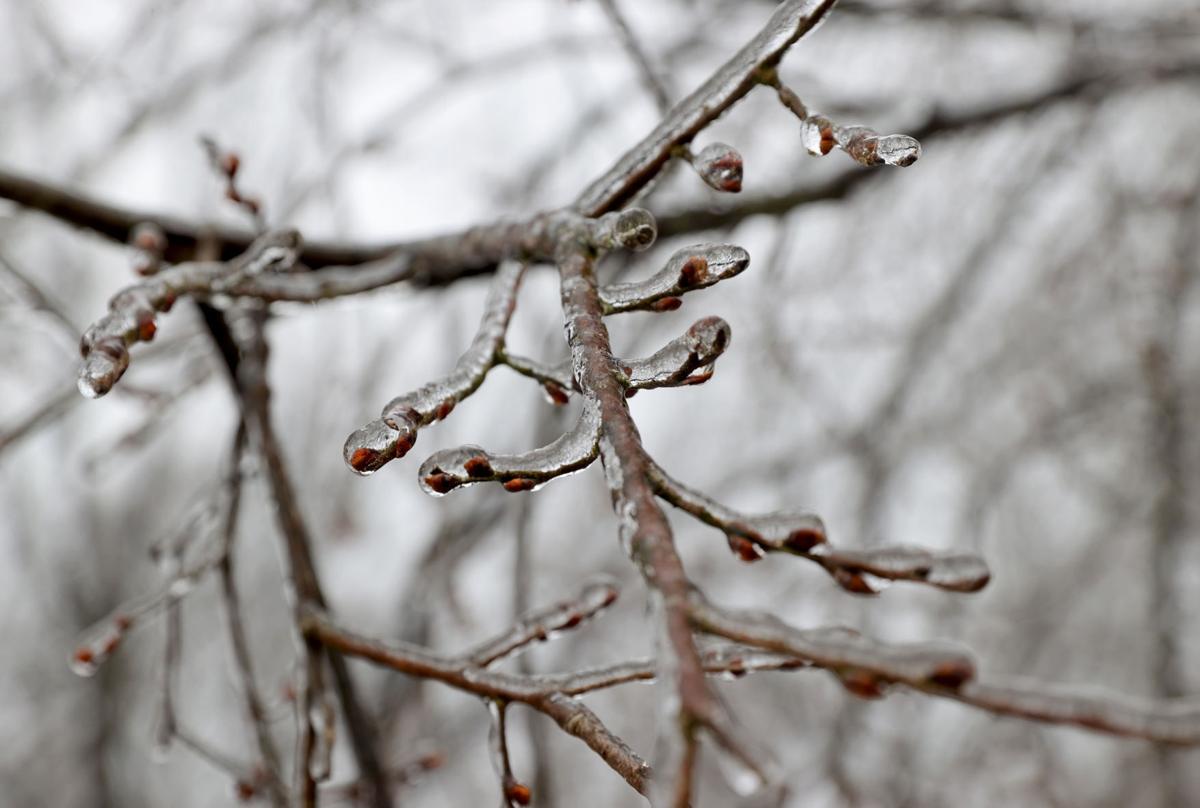 Tree branches are covered with ice in Richmond on Saturday, Feb. 13, 2021.

Most Dominion Energy customers who lost power during last weekend’s storm should have their electricity restored before the next round of wintry mix is expected to move into central Virginia on Thursday morning. But those same unlucky customers could potentially face a second outage, as well as tens of thousands more.

“I think the vast majority will be restored, but there may be customers who will see that they are still out when this next storm hits,” said Dominion spokesman Ray Daudani. “We’re certainly going to do everything in our power to make sure that we got most customers impacted from the first round of ice restored, and hopefully not be impacted yet again.”

“But ultimately there could be some instances, absolutely, where a customer may find themselves having been impacted by the first storm, and then here comes round number two, causing even more impacts,” he said.

Officials also warned of potentially hazardous driving conditions early Thursday and into Friday morning. Several local school systems — including those in Richmond and the counties of Henrico, Hanover and Chesterfield — announced Wednesday that they would be closed Thursday because of the weather. For the latest on closures, go to Richmond.com.

Southside Electrical Co-Op Inc. had more than four times the number of reported outages at 23,893. Of the localities served by the utility, Dinwiddie County had the largest number of outages at 4,800.

Dinwiddie authorities were to open the county’s elementary school at 5 p.m. Wednesday for anyone needing shelter.

The small percentage of Dominion customers that remained without power Wednesday “might have been in difficult territory that we got to get to, to reach their homes,” Daudani said.

“Maybe it’s more catastrophic in terms of the scenario of the damage,” he added. “It has taken a lot of work to get to this point, but we still got a lot of work ahead.”

Once a repair is made, the new power pole or equipment may be less susceptible to failing during a subsequent storm — depending of course on the circumstances.

“Just by going through the restoration process, in some cases you are able to get equipment that’s a little bit stronger — it’s more resilient,” Daudani said. “That being said, there’s a reason that the pole [or wires] went down in the first place. It may be in an area that has a lot of trees, and what took that wire or pole down the first time — most likely a tree limb or branch that had too much snow and ice — could come down from the tree or branch right next to it and create the same exact issue again.”

“We’ve got more [bad] weather in the forecast and we’re looking at something that could be just as bad if not worse than what we had a few days ago,” he said. “So we’re trying to get as much restored as we can [Wednesday], and the crews are already getting ready for the next batch of storm-related damage.”

Crews already have pretreated interstate routes in the north and western areas of the Richmond district to prevent snow and ice from bonding with the pavement.

Primary and high-volume secondary roads were being pretreated Wednesday in western Hanover and Goochland counties where the weather is expected to begin as snow, VDOT officials said.

All other routes will be monitored and treated with salt and sand during and after the storm, since the storm is expected to begin as mostly sleet and freezing rain in the district.

“Based on the forecasts, this storm looks similar to the weekend one we’re still recovering from,” VDOT Richmond District Maintenance Engineer Sean Nelson said in a statement. “On top of storm remnants from Saturday’s ice event and fatigue from back-to-back winter events, we are anticipating more fallen trees, downed power lines, icy road conditions and potential flooding in some areas south.”

“We can’t stress enough that travel will likely be hazardous Thursday into Friday morning, and drivers should prepare now to avoid travel as much as possible,” he said.

GRTC Transit System will operate on a delayed start on Thursday. GRTC will delay operating CARE service until 9 a.m. Thursday, and delay beginning the fixed-route bus service until 10 a.m.

Although GRTC currently plans to operate normal routes Thursday, the transit company will be monitoring conditions throughout the day and may require detours on certain routes, including from tree damage or low-hanging power lines blocking roads. Customers are strongly cautioned to prepare for service delays Thursday. Afternoon express trips may be able to operate normal schedules, but express riders should prepare for changes to afternoon service. If necessary, GRTC may suspend all services early on Thursday evening. GRTC will announce service plans for Friday as soon as possible.

Customers can check for service updates online at rideGRTC.com or by hearing the updated recording at (804) 358-GRTC.

Richmond International Airport has been preparing for the storm by pretreating many operational surfaces with salt, sand and biodegradable chemicals. The airport uses its own personnel and equipment for most clearing work, and has contractors on call to provide spot assistance if needed.

Air travelers are reminded to check their flight’s status before heading out and to allow extra time for the drive.

• Generators should be used in well ventilated locations outside at least 20 feet away from all doors, windows, and vent openings. Measure the 20-foot distance from the generator exhaust system to the building.

• Never use a generator in an attached garage, even with the door open.

• Place generators so that exhaust fumes can’t enter the home through windows, doors or other openings in the building. The exhaust must be directed away from the building.

• Make sure to install carbon monoxide (CO) alarms in your home. Follow manufacturer’s instructions for correct placement and mounting height.

• Turn off generators and let them cool down before refueling. Never refuel a generator while it is hot.

• Choose a heater with the seal of a qualified testing laboratory.

• Keep the heater at least 3 feet away from anything that can burn, including people.

• Choose a heater with a thermostat and overheat protection.

• Place the heater on a solid, flat surface.

• Make sure your heater has an auto shut-off to turn the heater off if it tips over.

• Keep space heaters out of the way of foot traffic. Never block an exit.

• Keep children away from the space heater.

• Plug the heater directly into the wall outlet. Never use an extension cord.

• Space heaters should be turned off and unplugged when you leave the room or go to bed.

• Accumulating sleet topped by freezing rain will make roads more dangerous than the same amount of snow. Don't assume that road conditions will play out like last Saturday, especially north and northwest of metro Richmond.

• New power outages are possible after the precipitation ends. Ice-laden trees could keep giving way on Friday due to the wet ground and winds.

• Keep phones and crucial electronic devices at 100% charged or on the charger as much as possible through Friday. Charge and ready any backup power packs or chargers for devices, and have flashlights and batteries ready.

• Nighttime temperatures will get colder over the weekend with lows in the 20s or upper 10s. Those without power should be prepared for the potential of freezing pipes.

Schapiro: Northam serves up a cold, heaping helping of revenge

A woman who videotaped herself sexually abusing her boyfriend while he was dying from a heroin overdose has been ordered to serve 16 years in prison.

A Native American tribe wants Va. recognition. The state dropped the ball, and other tribes are opposed.

A group of Cherokee Indians based in Henrico County wants to be recognized by Virginia.

Gov. Ralph Northam said Thursday that he is “proud to stand” with Del. Jay Jones, D-Norfolk, in his bid to become Virginia’s next attorney gen…

A legislative appointment idles while House and Senate feud

Almost 14 months ago, the agency that drafts legislation for the General Assembly lost its leader and the joint committee that sets rules for …

A Virginia Department of Transportation crew prepared for the storm by treating Interstate 95 in Spotsylvania.

Workers prepared a truck on Wednesday that would treat roads ahead of the storm.

A VDOT crew applies brine to Interstate 95 in Spotsylvania, Va., on Wednesday, Feb. 17, 2021. Roads were being pretreated ahead of the latest storm.

Tree branches are covered with ice in Richmond on Saturday, Feb. 13, 2021.