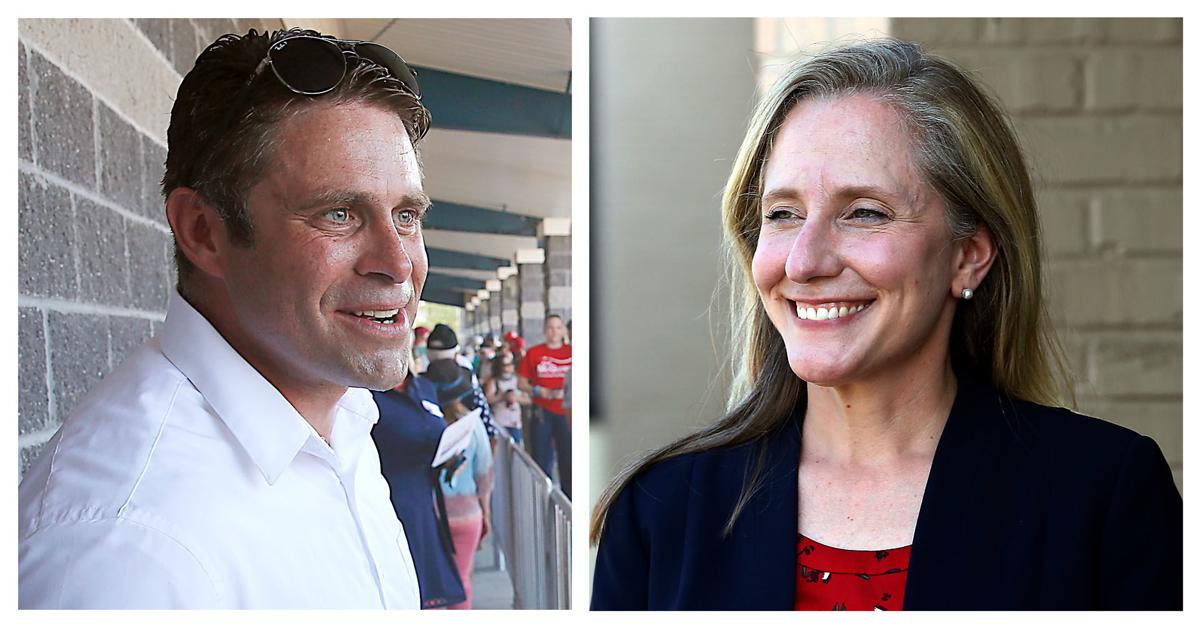 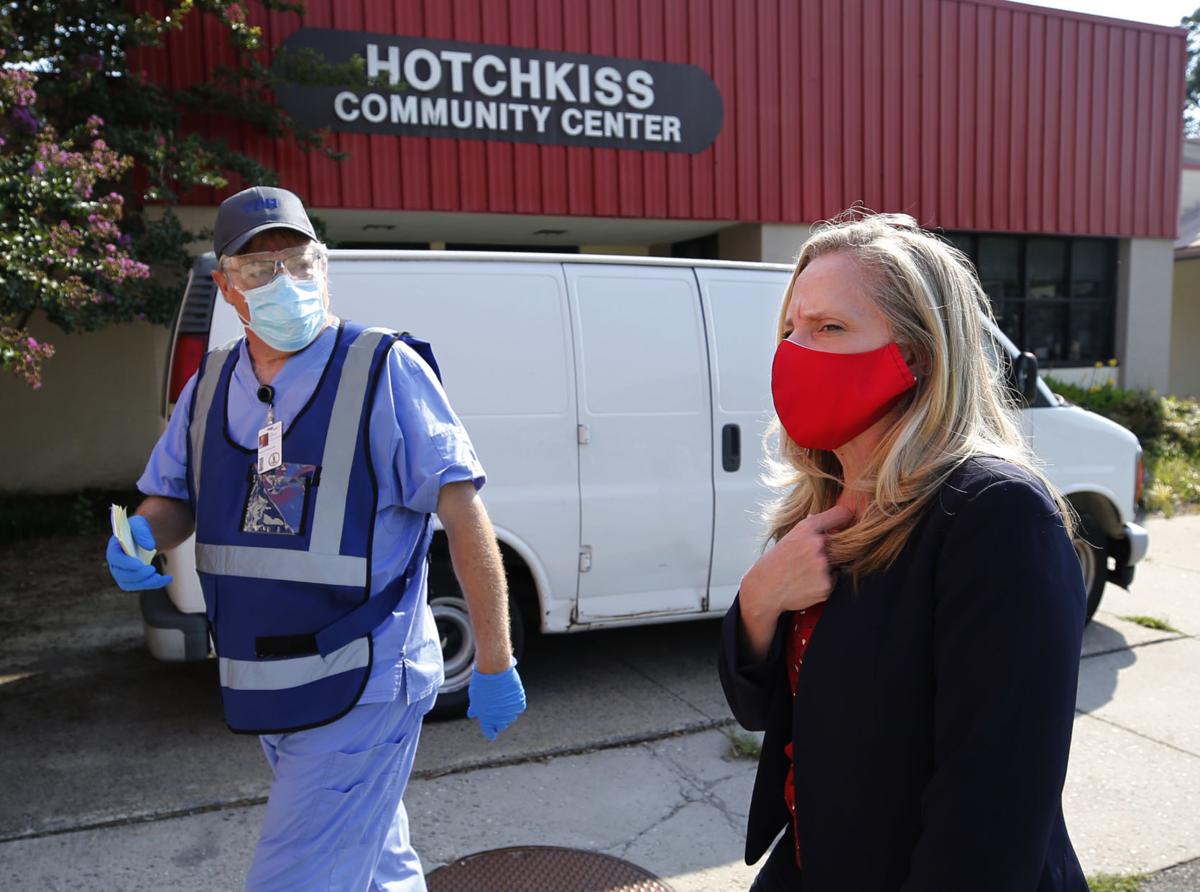 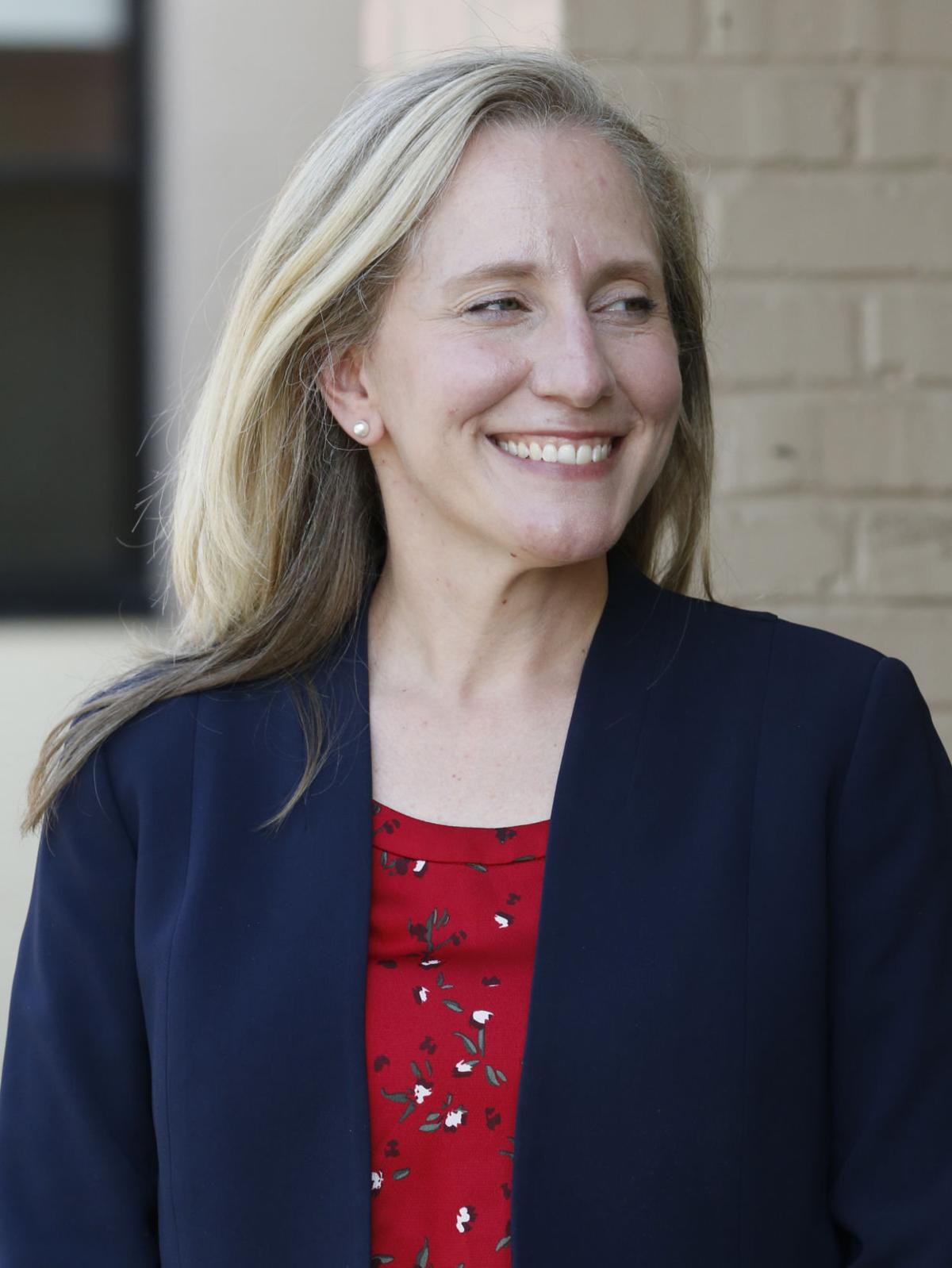 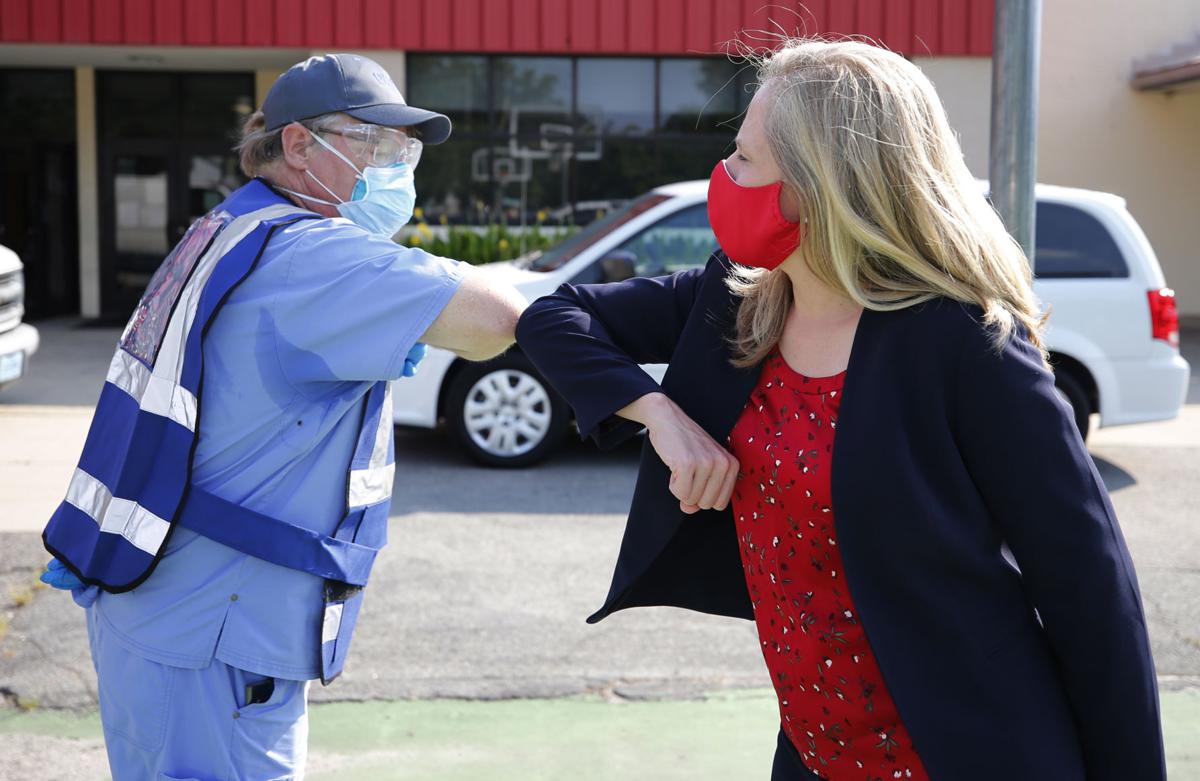 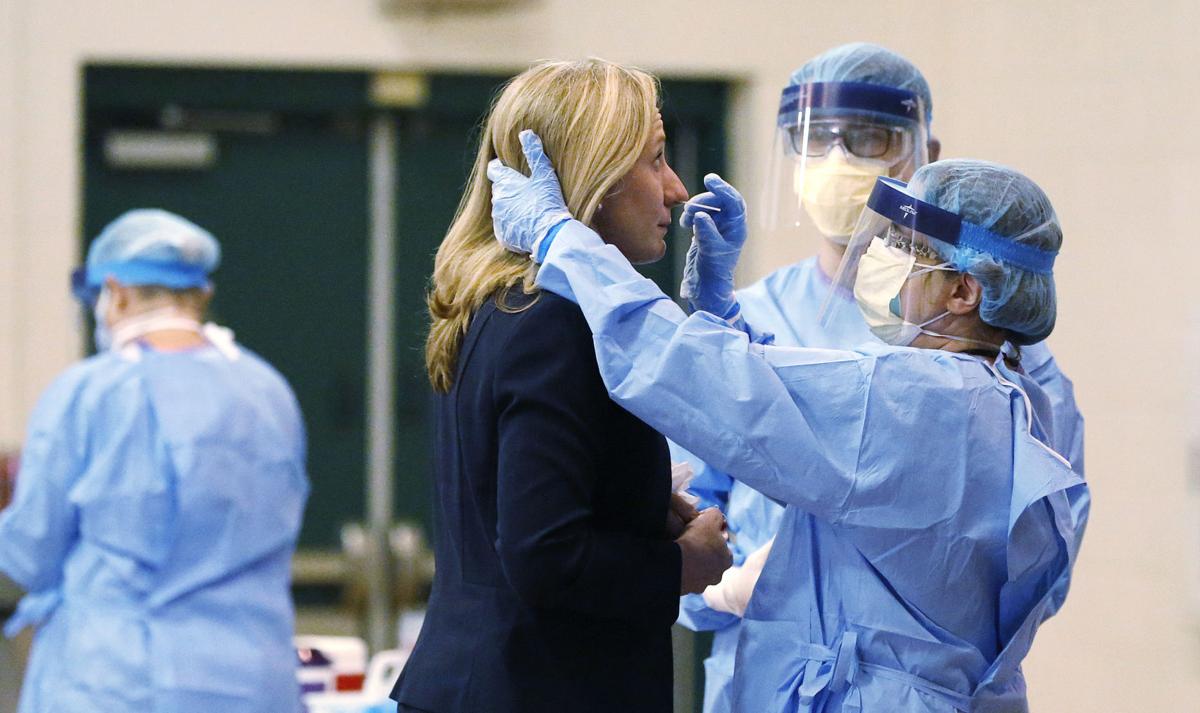 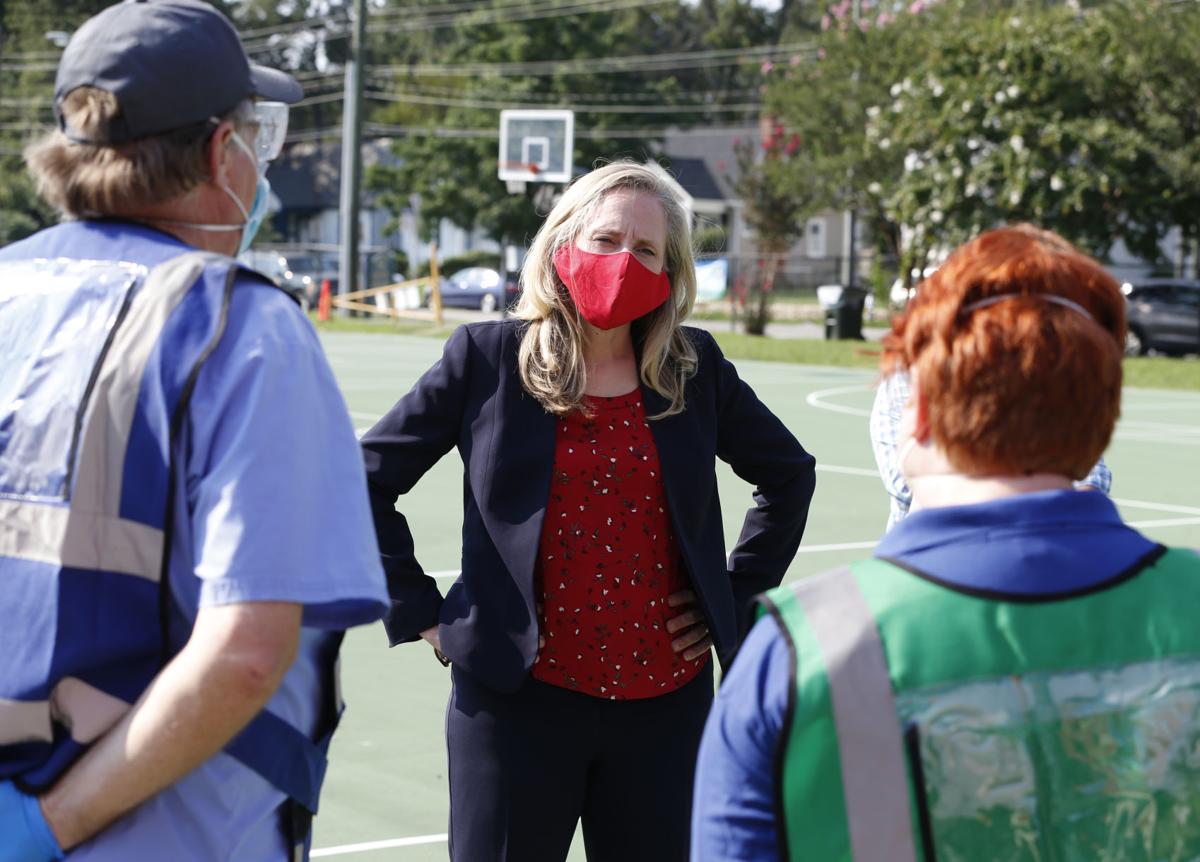 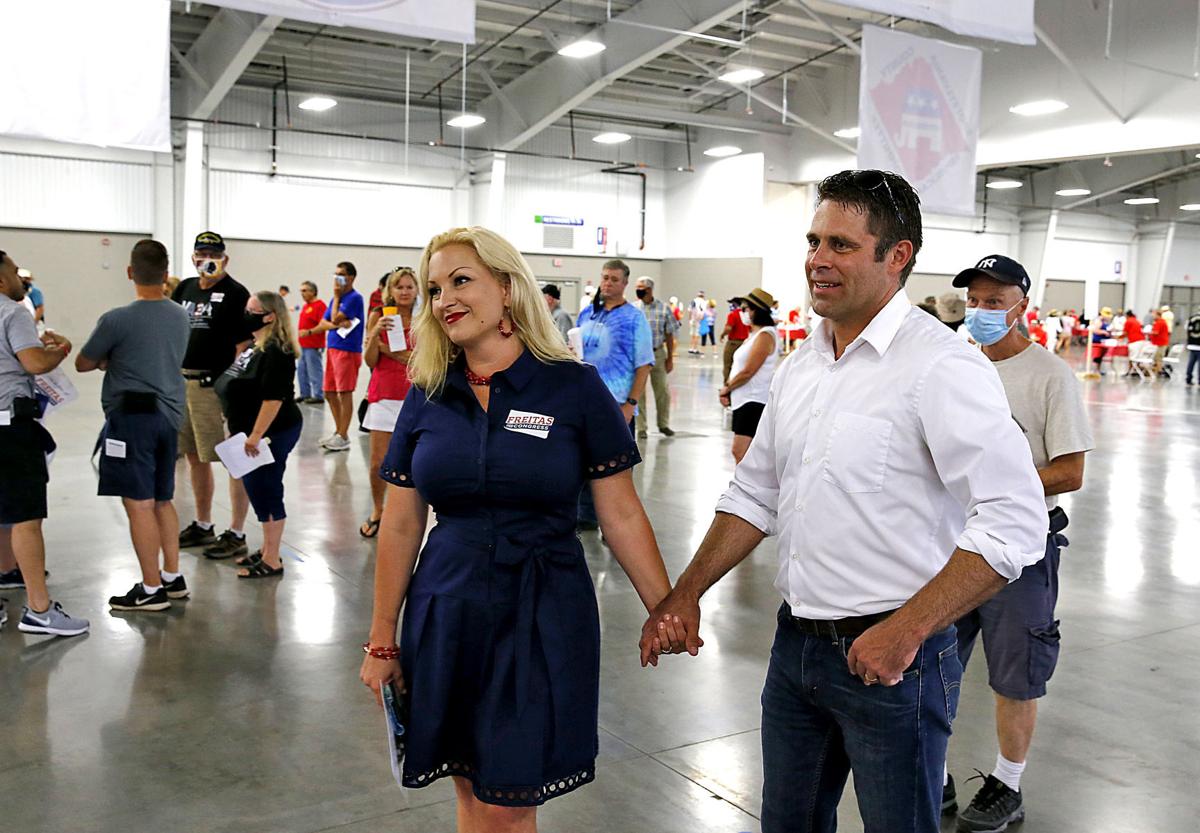 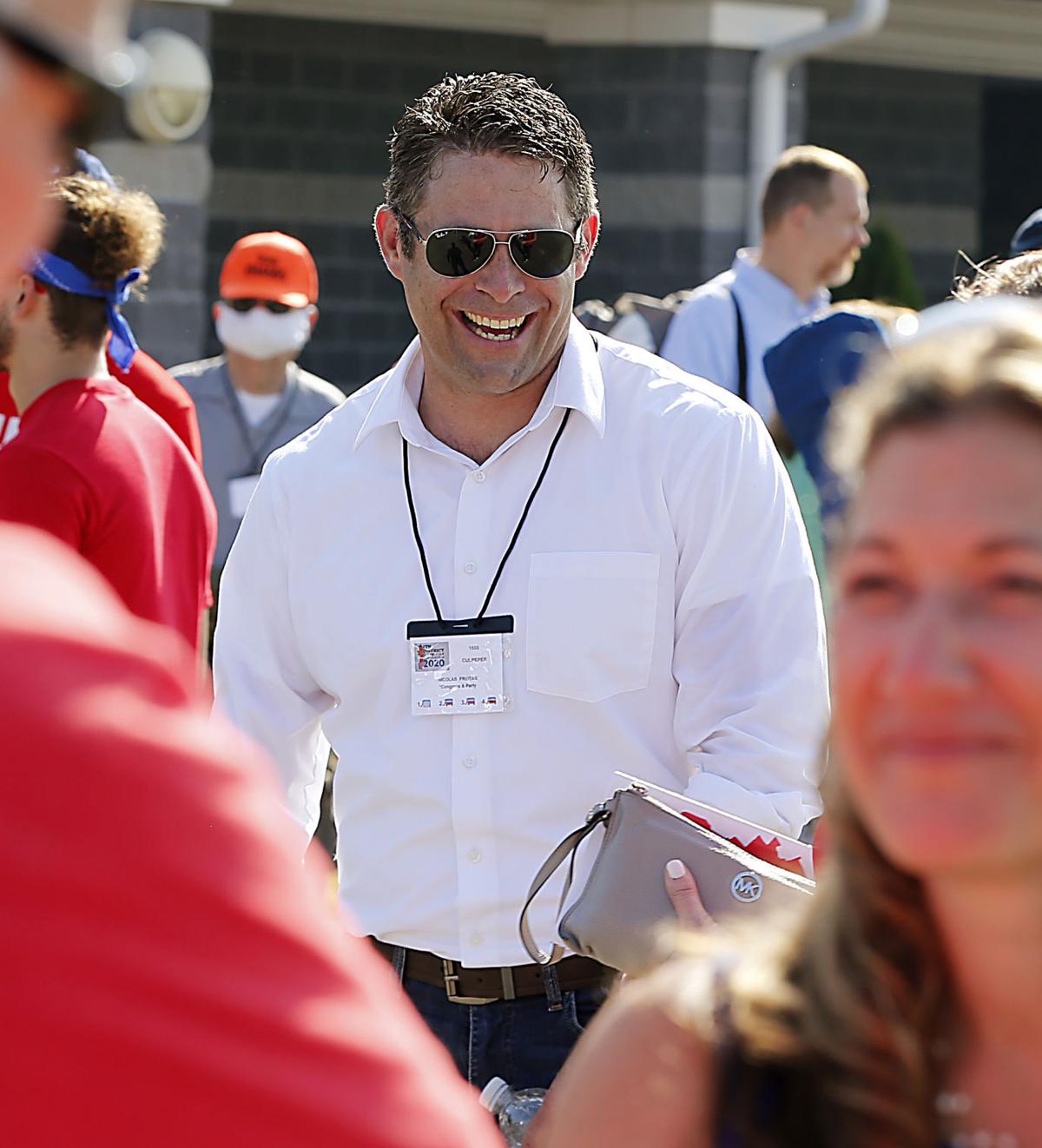 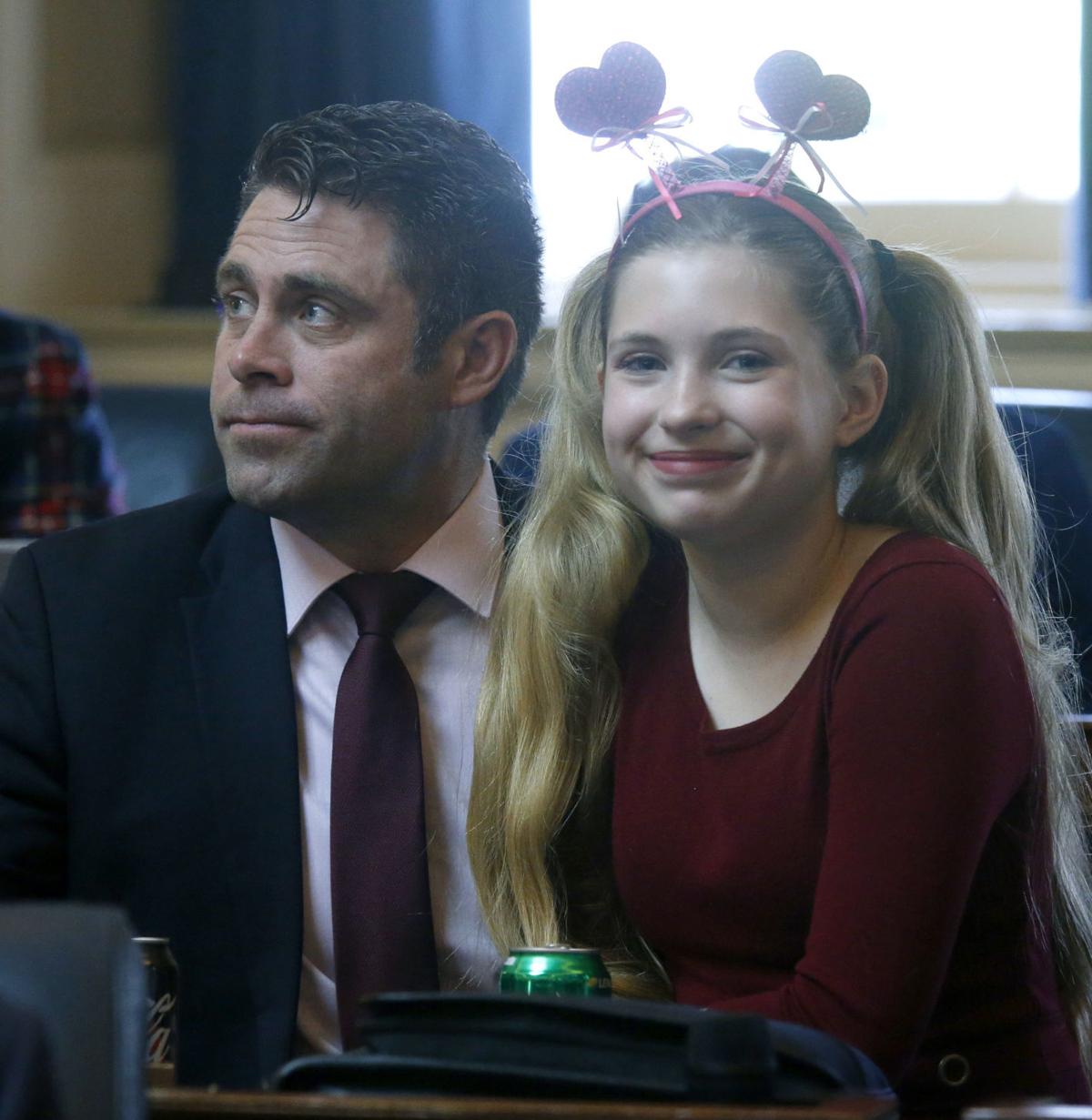 Del. nick Freitas, R-Culpeper, left, listens to colleagues as his daughter, Ally, 12, deciided to smile for a photographer during the floor session of the Virginia House of Delegates inside the State Capitol in Richmond, VA Friday, Feb. 14, 2020. 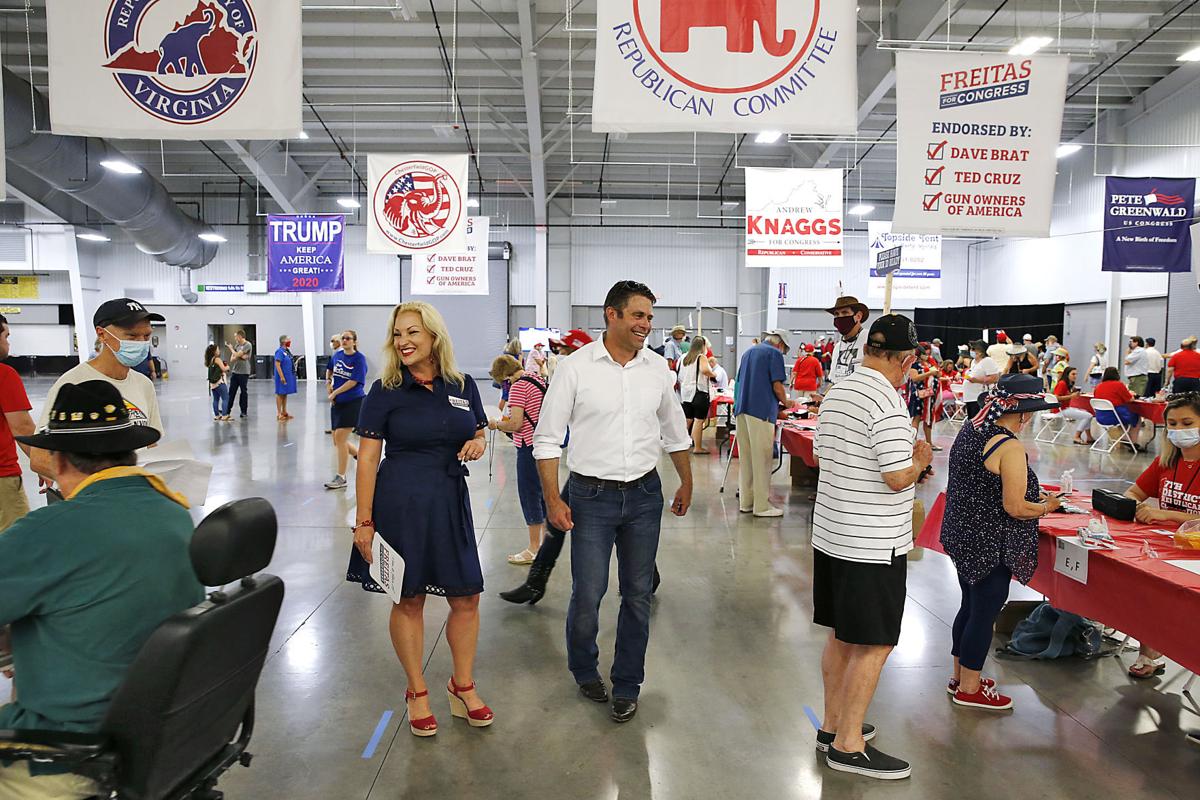 Two years after defeating a Republican incumbent in a congressional district traditionally hostile to Democrats, Rep. Abigail Spanberger, D-7th, is defending her seat in an election that could steal the public spotlight in Virginia and determine control of the U.S. House of Representatives.

The battle between Spanberger and Del. Nick Freitas, R-Culpeper, is one of several Virginia congressional races that are expected to carry the most political suspense in a state that has moved dramatically toward Democrats since Donald Trump was elected president four years ago.

Rep. Elaine Luria, D-2nd, also is defending a swing seat she won in 2018 when Democrats took control of the House. She faces former Rep. Scott Taylor in a rematch for the seat, anchored in Virginia Beach.

Republicans are trying to hold the 5th District seat after ousting Rep. Denver Riggleman in a drive-through GOP convention in June. In the sprawling 5th District, which extends from Fauquier County south to the North Carolina line, Democrat Cameron Webb, a physician and director of health policy and equity at the University of Virginia, faces Republican Bob Good, a former Campbell County supervisor and former Liberty University employee.

But that doesn’t mean Trump, who lost Virginia four years ago, won’t be a dominating presence here.

The 7th District campaign is likely to be framed by Democrats as a referendum on the U.S. response to a public health pandemic that has killed almost 190,000 Americans. Republicans are likely to frame it as a mandate for law and order in the face of sometimes violent protests against racial injustice that have roiled Richmond since the end of May.

Spanberger and Freitas, who both turned 41 in August, are competing in a 10-county district rooted in the Richmond suburbs of Henrico and Chesterfield counties, branching from Nottoway County in rural Southside to Culpeper County in the foothills of the Blue Ridge Mountains.

Both have backgrounds in national security — Spanberger as a former federal agent for the U.S. Postal Service and case officer for the Central Intelligence Agency, and Freitas as a former member of the U.S. Army Special Forces who served twice in the Iraq War.

She is a member of the Blue Dog Democrats, a centrist coalition of representatives from conservative-leaning districts who emphasize fiscal responsibility and national defense. He is a free-market conservative with a libertarian streak who won a third term in the House of Delegates last year but lost the Republican nomination for the U.S. Senate in 2018.

Rep. Don McEachin, D-4th, who faces a re-election challenge from Republican Leon Benjamin, said of Spanberger, “She’s not a liberal Democrat. She’s very much her own person.”

“I have yet to see her have a knee-jerk reaction to anything,” McEachin said.

Riggleman, who is considering running for governor next year, knows and respects both candidates, although he said he aligns politically with Freitas. He thinks the 7th District election “could be a bellwether for the rest of the country.”

The U.S. Chamber of Commerce endorsed both Spanberger and Luria, which Holsworth called “pretty remarkable.” But the National Federation of Independent Businesses, representing small businesses, endorsed Freitas the next day.

“The small guys came out for us,” Freitas said with a grin in an interview at his campaign headquarters in Culpeper.

The candidates already have begun trying to frame each other on the extremes, with Trump’s presence as a wild card in a district where Spanberger topped Rep. Dave Brat by about 6,800 votes in a race that included a Libertarian candidate who received about 4,200 votes. Spanberger carried Henrico by 20,000 votes and Chesterfield by 10,000 while Brat won the district’s eight rural counties.

“The uncertainty is where Henrico and Chesterfield are about Trump,” Holsworth said.

Chesterfield and Henrico account for more than 61% of the voters in the 7th District, which Trump carried in 2016 and Republican Ed Gillespie won in his unsuccessful bid for governor in 2017. Sen. Tim Kaine, D-Virginia, won the district in 2018 against Corey Stewart, who had defeated Freitas for the Republican nomination.

Spanberger doesn’t call out Trump by name, but she is critical of the president’s handling of the COVID-19 pandemic, which she said has “redefined everything.”

“It’s the lens through which we’re looking at every challenge our country faces,” she said in a recent interview at the Henrico Health District.

Spanberger had just met for more than an hour with county and city public health employees about the difficulties they have faced in responding to the public health crisis. Later, she visited a free community testing event in North Richmond and received a nasal swab test that came back negative.

During the meeting with public health workers, she said that testing for the virus “hasn’t been what I thought it should have been” and talked about the need for the president to use the Defense Production Act to require industry to produce critical supplies of personal protective equipment.

“My background in intelligence is, if you don’t understand the problem, you can’t deal with the problem,” she said.

Before the pandemic, Spanberger had focused on policy priorities such as campaign finance reform and expanding broadband telecommunications, which the public health emergency has made more urgent as communities relied on their computers for telehealth, virtual learning and working remotely.

She lives in western Henrico, where COVID-19 ravaged long-term care facilities such as Canterbury Rehabilitation & Health Care Center, with 51 deaths, and made the county second in Virginia for fatalities from the virus.

Spanberger worked on legislative solutions — from more federal help with personal protective equipment to aid for nursing homes and long-term care facilities — in alliance with Republicans such as Riggleman and Rep. Morgan Griffith, R-9th, who later tested positive for COVID-19. She also voted for a series of bipartisan emergency relief bills, signed by the president, that included forgivable loans to businesses crippled by the virus, enhanced unemployment benefits for those thrown out of work, money for health care providers and aid to state and local governments.

But Congress and the White House have not been able to agree on another round of emergency relief, which the House passed in May.

“We’re basically at a little bit of a standstill,” she told public health employees.

Freitas commended the president’s response to the public health emergency, including sending a hospital ship from Norfolk to New York City when the virus was raging there and providing support in pandemic hot spots.

“The Trump administration has done a good job of allocating resources to make sure medical resources were not overwhelmed,” he said.

Freitas is wary of additional emergency aid, although he reserves judgment on any stimulus package that might emerge. “The response can’t be just the government handing out money it doesn’t have,” he said. “The response has to be how to allow people to operate in a safe and responsible manner.”

“There’s no solution to any of this that doesn’t involve people being able to responsibly go back to work,” he said.

Freitas frames the election as a contrast in philosophies about the role of government in responding to crises, “whether it’s COVID or differentiating between protests and rioters and looters.”

He also wants to campaign on law and order, as Trump has done nationally because of sometimes violent clashes between police and protesters in Richmond and other cities since the death of George Floyd in police custody in Minneapolis in late May.

“You’ve got a lot of people who work in Richmond and live in Chesterfield and Henrico, and they’re watching what’s happening in that city right now,” he said.

“I don’t think anyone has a problem with peaceful protests. ... But we’re watching as Democrat leadership in Richmond has allowed protests to turn into riots without doing anything about it,” Freitas said.

“I don’t think anybody wants to see that happening either in Richmond or in their own neighborhood,” he said.

Spanberger said people generally have protested peacefully against racial injustice and police brutality in communities throughout the district. “I’ve attended a number of them,” she said.

“Incidents of violence are always detestable,” she said. “Frankly, they do significant damage ... to the message of the peaceful protesters.”

Spanberger predicted the issue will “continue to be a discussion point by those who want to sow division in our communities.”

Holsworth, who lives in South Richmond, is skeptical that the law-and-order strategy will work in the 7th District race.

“Trying to talk about the protests in Richmond and pin Spanberger to it is going to be a little bit of a reach,” he said.

Politically, Holsworth called the 7th “a very tough district for Democrats,” but he said Spanberger has a fundraising advantage — she’s raised almost $5 million compared with about $1 million for Freitas.

He also said Freitas doesn’t live in the part of the district where most of the voters do.

“He has the challenge of introducing himself to everybody but Republicans,” Holsworth said.

Schapiro: Less who you are, more where you're from

Del. nick Freitas, R-Culpeper, left, listens to colleagues as his daughter, Ally, 12, deciided to smile for a photographer during the floor session of the Virginia House of Delegates inside the State Capitol in Richmond, VA Friday, Feb. 14, 2020. 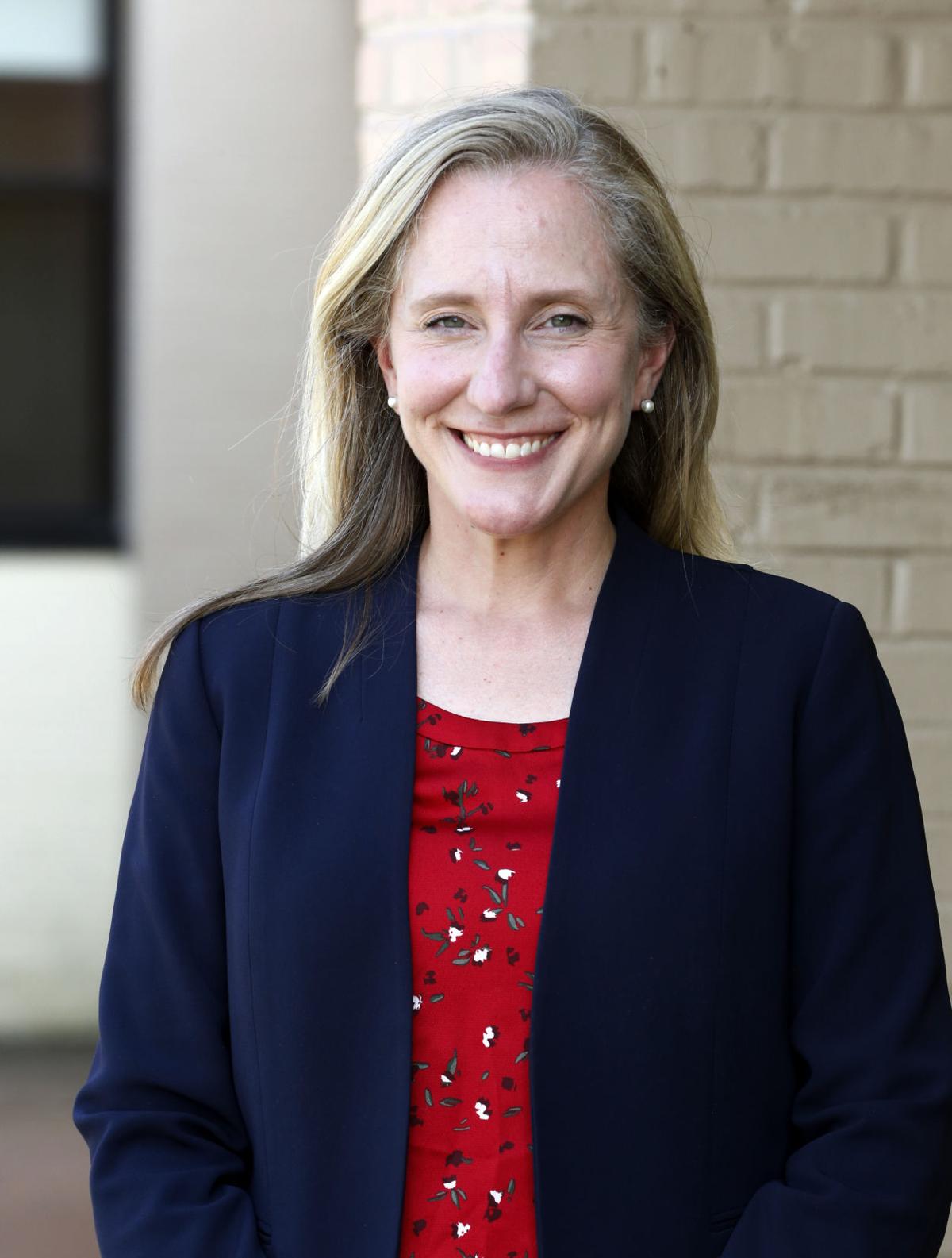 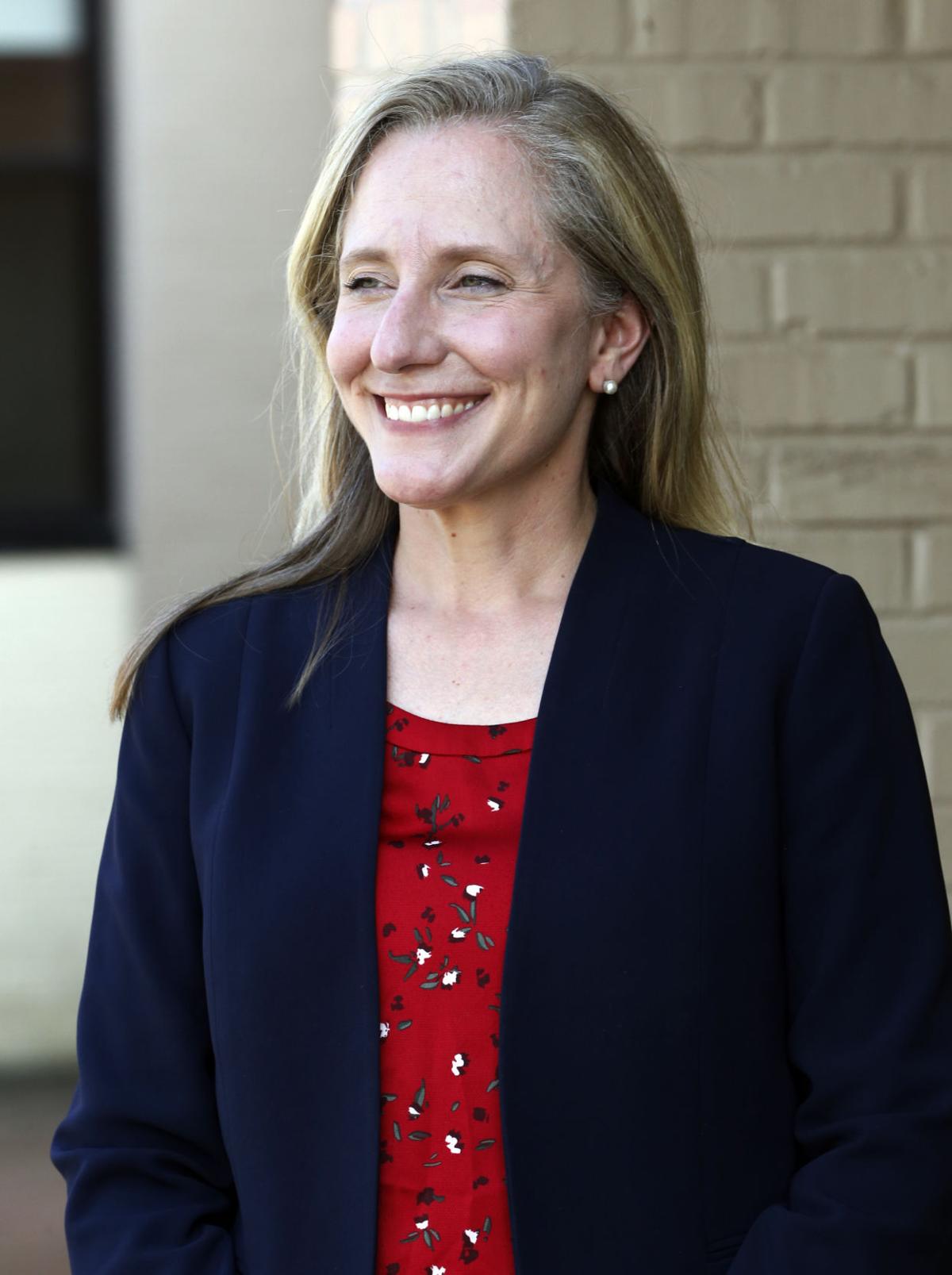 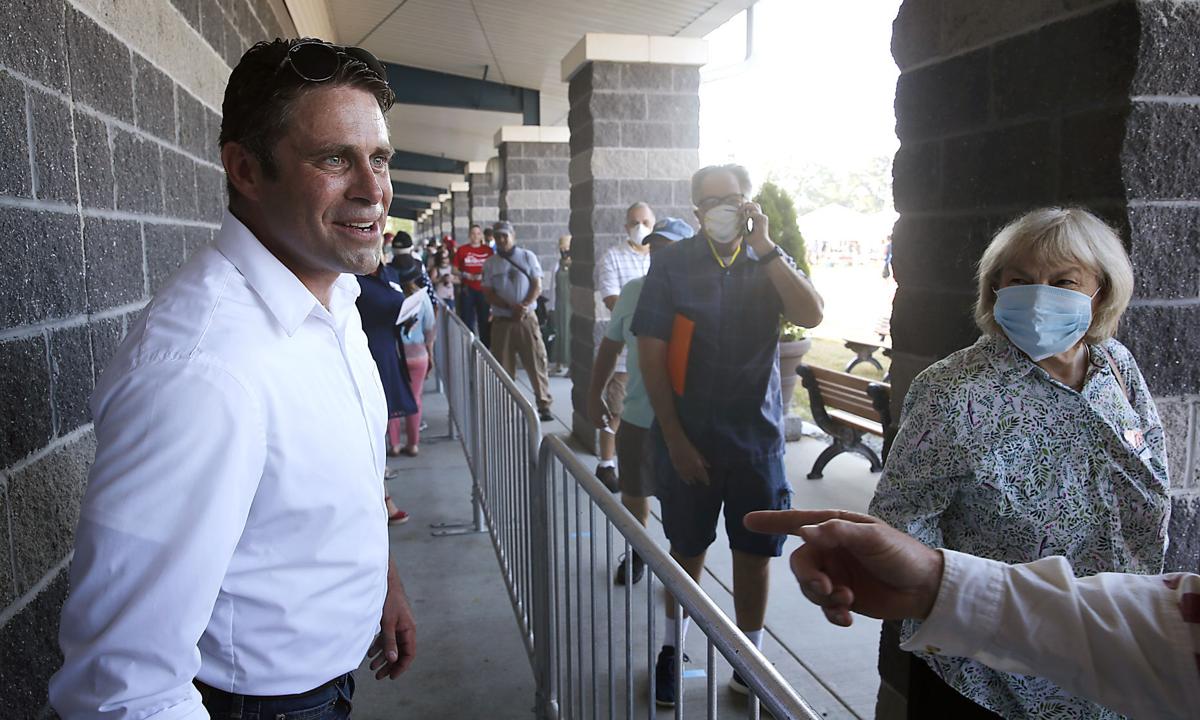