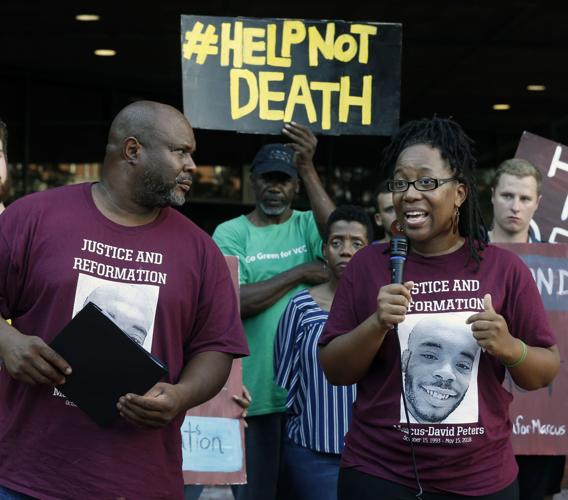 Princess Blanding (right), the sister of Marcus-David Peters, is shown during a news conference in Richmond in 2018. She was joined by Peters’ uncle, Jeffrey Peters (left). Blanding has said the law named for her brother has been diluted from its original intentions. 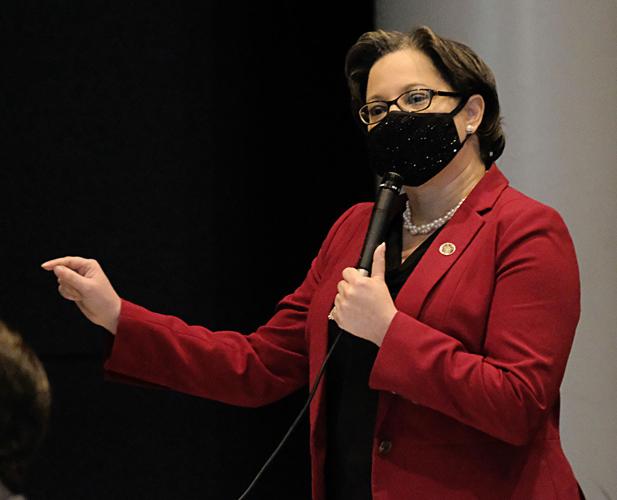 Three and a half years after a Richmond police officer killed Marcus-David Peters — an unarmed high school biology teacher in a psychiatric crisis — Virginia is launching a new system to respond quickly to mental health emergencies, ideally without law enforcement being involved.

The “Marcus Alert” system, named after Peters, will begin in Richmond and four other areas of the state on Wednesday. It is part of a rollout of six new services financed by Virginia’s Medicaid program to provide help for people in their communities to avoid sending them to state mental hospitals, private emergency rooms and juvenile detention centers while in behavioral crises.

The system, once fully implemented across the state, is designed to use regional call centers to alert mental health teams to potential psychiatric emergencies, quickly assess risks and dispatch professionals to help the person in crisis by persuasion instead of force.

“It’s a behavioral health response to a behavioral health crisis,” said Heather Norton, assistant commissioner at the Virginia Department of Behavioral Health and Developmental Services. “We want to mitigate to the extent possible the need for law enforcement involvement.”

New Medicaid rates will take effect Wednesday to ensure increased reimbursement for public and private organizations to provide a wider range of services during and after psychiatric emergencies.

Marcus Alert initially will operate as a pilot program in Richmond, Virginia Beach, Prince William County, Bristol and adjacent Washington County, and five counties in the northern Piedmont. It must expand to all parts of the state by July 1, 2026.

The system also will rely initially on existing emergency hotlines, including diverted 911 calls, until a new 988 call line is created next July for a wide range of behavioral health emergencies, including suicide prevention.

One contractor, PRS Inc., based in Fairfax County, will operate the regional call centers for Richmond, Virginia Beach, and the counties of Orange, Madison, Rappahannock, Culpeper and Fauquier.

“The system won’t be built overnight,” said Alexandria Robinson, one of two program coordinators for the Marcus Alert system.

The phased, piecemeal approach and continued role of law enforcement in the legislation creating the system does not sit well with Peters’ sister, Princess Blanding, who used Gov. Ralph Northam’s ceremonial bill signing a year ago to deride the law.

Blanding, who ran for governor this year as a candidate of the independent Liberation Party, was blunt with Northam and lawmakers who had gathered for the ceremony last December.

“Please take a moment to pat yourselves on the back for doing exactly what this racist, corrupt and broken ... system expected you all to do: make the Marcus Alert bill a watered down, ineffective bill that will continue to ensure that having a mental health crisis results in a death sentence,” she said.

In an interview on Tuesday, Blanding said her views had not changed.

“My concerns still stand that the Marcus Alert, as it is written, will yield in too many cases the same result,” she said.

Blanding blames lawmakers for “diluting the language and removing so many key components” from the bill, specifically, measures that she thinks would curb dangerous interactions between people in crisis and police officers.

Sen. Jennifer McClellan, D-Richmond, also had hoped to create a mandatory statewide system instead of a pilot program that would be expanded eventually across the state.

“I think it’s better than nothing,” McClellan said Tuesday. “I carried the legislation that would have implemented the system the way she envisioned it and I would have preferred that, but I think any progress is a good first step.”

Her legislation to create the system was folded into a separate bill that took a phased approach during a special legislative session in August 2020 — after Peters’ death became the focus of nightly protests in Richmond.

The murder of George Floyd by a Minneapolis police officer two months earlier triggered the Richmond protests, but they soon focused on statues of Confederate leaders along Monument Avenue, especially a monument to Gen. Robert E. Lee in a traffic circle that protesters informally renamed for Peters.

Blanding and McClellan also wanted to require law enforcement to take a lower profile — with unmarked cars and no uniforms — if they must show up at psychiatric emergencies.

“For some people, that in and of itself is triggering when they already are feeling threatened,” McClellan said.

Similarly, she said a new 988 call line is important because many people are reluctant to call 911 in a psychiatric crisis for a loved one because of the potential police response.

Del. Jeff Bourne, D-Richmond, who sponsored the legislation in the House, said he’s excited about the program and the changes it will bring at the intersection of mental health and policing.

“Now we have these co-response teams, and hopefully the person in crisis will be able to get the right response — the help and resources they need — rather than just ride in the back of a police car as is often the case,” Bourne said.

Asked about criticism that the bill doesn’t sufficiently curb the role of police, Bourne said the state needs to collect data on the program to make sure it is working as intended and evolving to meet the needs of the state.

“We’ve got to see how this works in practice, and whether we struck the right balance. What we have is hours of talks and compromise,” Bourne added.

Robinson, one of the state coordinators for the Marcus Alert system, said the program includes: protocols for diverting 911 calls to regional behavioral health call centers; memorandums of understanding with law enforcement agencies over their role in the new mobile crisis response system; and state-certified training for law enforcement, call center operators and behavioral health professionals that includes education on issues of “racial equity.”

The alert system also is part of the broader mobile response system funded through Medicaid, she said. “As a stand-alone, it wouldn’t be successful. It’s only successful because of the training.”

The mobile crisis service will require teams of at least two behavioral health specialists in most cases. Those teams could include staff of local and regional community services boards (in Richmond, a behavioral health authority) and employees of private providers that often deliver community-based services to people who need psychiatric care.

The new Medicaid reimbursement rates will “allow for different combinations of folks to go out together,” said Alyssa Ward, behavioral health clinical director at the Department of Medical Assistance Services, which runs the federal-state financed health program for poor, elderly or disabled Virginians.

The Marcus Alert system has the highest public profile of the new services, but Medicaid also is changing the way it reimburses public and private providers for two services to help children and adolescents overcome disruptive behavior that could land them in the state’s juvenile justice system, which already is using those services to keep youths out of detention centers.

“They shouldn’t have to be involved in the juvenile justice system in order to get treatment,” said Ward, a child psychologist.

Similarly, the state is launching services to keep people out of Virginia’s overcrowded, understaffed mental hospitals, both for adults and children.

The new services are designed to provide a safe place for people to stabilize after a behavioral health crisis, during a crisis until they can be fully assessed over a 23-hour period, or in a crisis stabilization unit in their communities instead of a psychiatric hospital ward.

“It’s essentially creating a whole lot of services beneath the hospital that haven’t existed before or been reimbursed this way,” Ward said.

State behavioral health officials say Medicaid reimbursements, funded with a combination of state and federal dollars, are essential to the Marcus Alert system, mobile crisis response, and other state efforts to give people proper behavioral health care in their communities instead of in institutions.

“What they’re doing is critical to our success,” said Norton, the assistant commissioner for behavioral health and developmental services.

Ultimately, fixing the state’s fragmented behavioral health system comes down to money for services that have been proved to work, Ward said. “You’re got to pay for what you want.”

In a handful of Virginia courts, behavioral health dockets offer treatment, rather than jail, for offenders with mental illness.

Princess Blanding (right), the sister of Marcus-David Peters, is shown during a news conference in Richmond in 2018. She was joined by Peters’ uncle, Jeffrey Peters (left). Blanding has said the law named for her brother has been diluted from its original intentions. 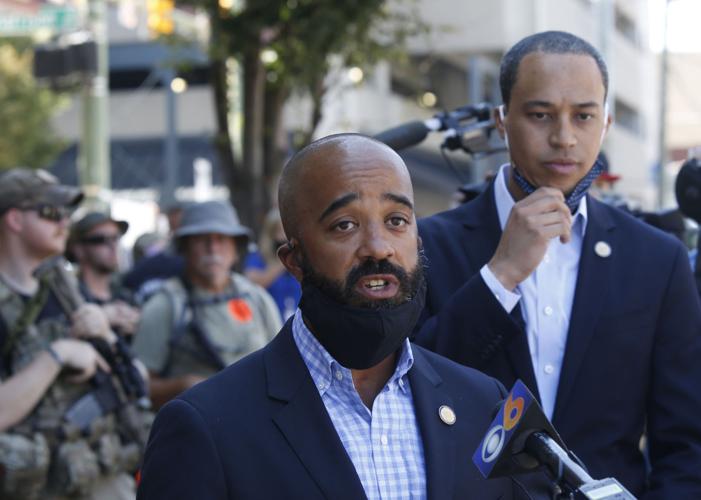 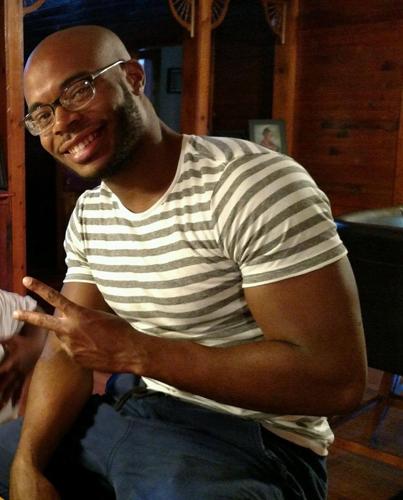 Marcus-David Peters was fatally shot in 2018 by a Richmond police officer.