Families evacuated from Kabul, Afghanistan, walk through the terminal before boarding a bus after they arrived at Washington Dulles International Airport, in Chantilly, Va., on Thursday, Sept. 2, 2021. (AP Photo/Jose Luis Magana) 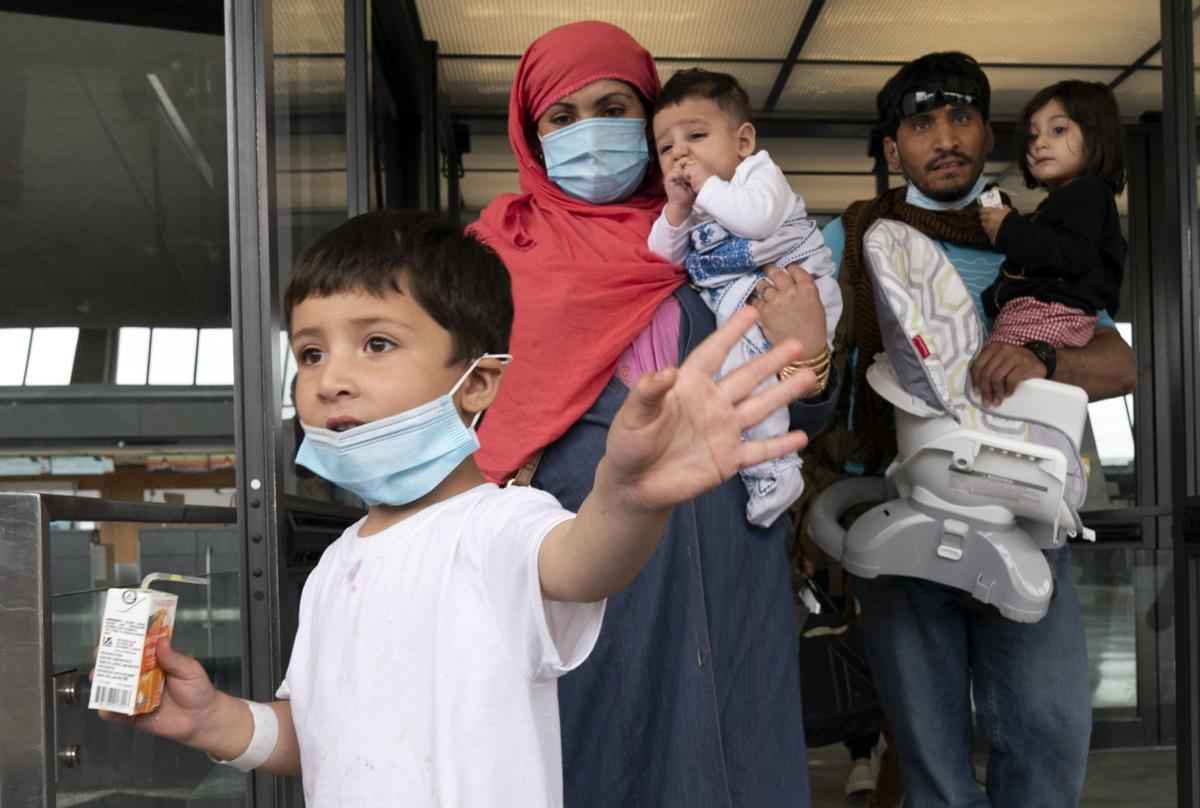 Families evacuated from Kabul, Afghanistan, walk through the terminal before boarding a bus after they arrived at Washington Dulles International Airport, in Chantilly, Va., on Sunday, Aug. 29, 2021. (AP Photo/Jose Luis Magana)

State public health officials are tracking potential human exposure to measles from six Afghan children who had been evacuated to the United States, primarily through Washington Dulles International Airport, and sent to temporary “safe havens” at eight military bases, including three in Virginia.

White House press secretary Jen Psaki confirmed last week that the U.S. temporarily had paused flights of Afghans into Dulles and Philadelphia International Airport because of four cases of measles documented among children who had arrived here as part of a massive evacuation from Afghanistan after the Taliban took control of the country on Aug. 15.

The Virginia Department of Health said Tuesday that it had initially confirmed five cases of measles among Afghan arrivals, but added a sixth case later that day, according to Laurie Forlano, deputy director of epidemiology, who said she expects additional cases because of the low vaccination rate against measles and other childhood diseases in Afghanistan. A seventh case has been confirmed in Wisconsin, where refugees are living temporarily at Fort McCoy, The Associated Press reported.

“There is no community transmission in Virginia that has been documented at this time,” Forlano said in an interview on Tuesday.

The department said it is tracing potential exposure to the contagious childhood illness in the Richmond area, Northern Virginia and the Piedmont region, where thousands of Afghan allies and their families are living temporarily until they are resettled in communities across the country.

The Richmond and Henrico County health districts are working with one Richmond-area hospital where people may have been exposed to measles, while the Piedmont Health District is tracing potential exposures at Fort Pickett, near Blackstone in Nottoway County.

Potential exposure also is a concern in Northern Virginia, where refugees entered the country through Dulles and have been initially processed at the Dulles Expo Center nearby in Fairfax County. Some refugees also have received medical care in hospitals in the region.

“On the basis of Dulles, it’s probably quite a significant effort underway,” Forlano said.

The federal government is vaccinating all Afghan arrivals against measles and other childhood diseases that are uncommon in the U.S. Virginia recorded one case of measles last year and two the previous year.

It also is providing vaccines and other prophylactic measures to prevent measles among people who may have been exposed, Forlano said, especially young children, pregnant women and others with compromised immune systems.

“I think what we would be most concerned about are individuals who are too young to be vaccinated ,” she said, referring to children under 1 year old.

Previously, almost 2,000 Afghans were flown into Dulles between July 30 and Aug. 14 as part of Operation Allies Refuge, which provided special immigrant visas to allies of the U.S. war effort and their families. Those Afghans then traveled to Fort Lee, near Petersburg, for temporary residence while they were prepared for resettlement in communities across the country.

After the Taliban’s conquest, the U.S. led a massive airlift from the airport in Kabul that evacuated more than 120,000 people — some Americans, some lawful permanent residents with green cards, but most of them potential special immigrant visa holders, their families, and vulnerable Afghans most at risk if they stayed in Afghanistan.

Since mid-August, more than 64,000 people have been evacuated to the United States under Operation Allies Welcome, according to the Department of Homeland Security. About 7%, or almost 4,500, were U.S. citizens, and 6%, or more than 3,800, were green card holders, who were free to travel to their homes after arrival. The remaining 87%, or 55,680, were Afghans, admitted to the country through humanitarian parole, although many may be eligible for special immigrant visas as allies to the U.S. military.

About one-third of the Afghan refugees at Fort Pickett are children, said Rep. Abigail Spanberger, a Democrat who represents the base and Nottoway as part of the 7th Congressional District.

In Northern Virginia, arriving citizens and most green card holders have been processed through a repatriation center set up by the state at the Washington Dulles Airport Marriott Hotel, while Afghans have been taken to the Dulles Expo Center in Chantilly. There, they have been processed, tested for COVID-19, offered vaccination and directed to necessary support services.

“It’s humming in there,” said a volunteer at the Expo Center who asked not to be identified. “It’s getting some needed support to some highly, highly vulnerable people.”

The operation fell short initially in coordinating medical care for arriving refugees, who were sent to nearby hospitals for treatment, generally for “low acuity” or less severe medical conditions.

The situation, which The Washington Post first reported last week, prompted Sens. Tim Kaine and Mark Warner, both Virginia Democrats, to ask federal officials on Monday to boost support of local hospitals and health care providers, whose capacity already is strained by a surge in COVID-19 cases and hospitalizations.

They told Secretary of Homeland Security Alejandro Mayorkas and FEMA senior response official Robert Fenton that the government “must do more to develop clear and explicit lines of communication, acknowledge the concerns and questions of local communities, and coordinate the operation so that states and localities can effectively support and backstop the operation with minimal disruption.”

“We remain concerned about the impacts that insufficient coordination and communication have had so far, especially related to healthcare operations in Northern Virginia,” the senators said.

Regional officials faulted the lack of federal coordination among hospitals in Northern Virginia or a plan for transporting refugees back to the Expo Center from hospitals after treatment, as well as the insistence by U.S. Customs and Border Patrol officials that all evacuees who hadn’t cleared customs be sent to one hospital instead of being distributed among many.

The Northern Virginia Emergency Response System, an alliance of 16 hospitals and local governments in the region, said it quickly took over the role of coordinating those services so that Northern Virginia hospitals never were overwhelmed at the expense of other patients.

“At no point in time was anyone else turned away from care,” Executive Director Kristin Nickerson said.

“At the end of the day, we’ll do whatever it takes to ensure the continuity of health care delivery in Northern Virginia,” Nickerson said.

Some of the initial problems with care arose from long delays in unloading aircraft waiting on the tarmac at Dulles, which resulted in some refugees going directly to hospitals for care, according to officials at the regional emergency response system, established after the Sept. 11 terrorist attacks 20 years ago.

The delays occurred as Homeland Security officials compared passenger manifests with those at airports in the countries from which the refugees had departed. Homeland Security said it resolved those issues within two days.

Virginia Secretary of Health and Human Resources Dan Carey estimated that hospitals in Northern Virginia reached about 90% of capacity, but acknowledged, “I think there were some gaps.”

The regional emergency response system and its local partners are seeking reimbursement of hundreds of thousands of dollars in expenses, but Carey said, “We see that as a direct federal responsibility.”

Families evacuated from Kabul, Afghanistan, walk through the terminal before boarding a bus after they arrived at Washington Dulles International Airport, in Chantilly, Va., on Thursday, Sept. 2, 2021. (AP Photo/Jose Luis Magana)

Families evacuated from Kabul, Afghanistan, walk through the terminal before boarding a bus after they arrived at Washington Dulles International Airport, in Chantilly, Va., on Sunday, Aug. 29, 2021. (AP Photo/Jose Luis Magana)