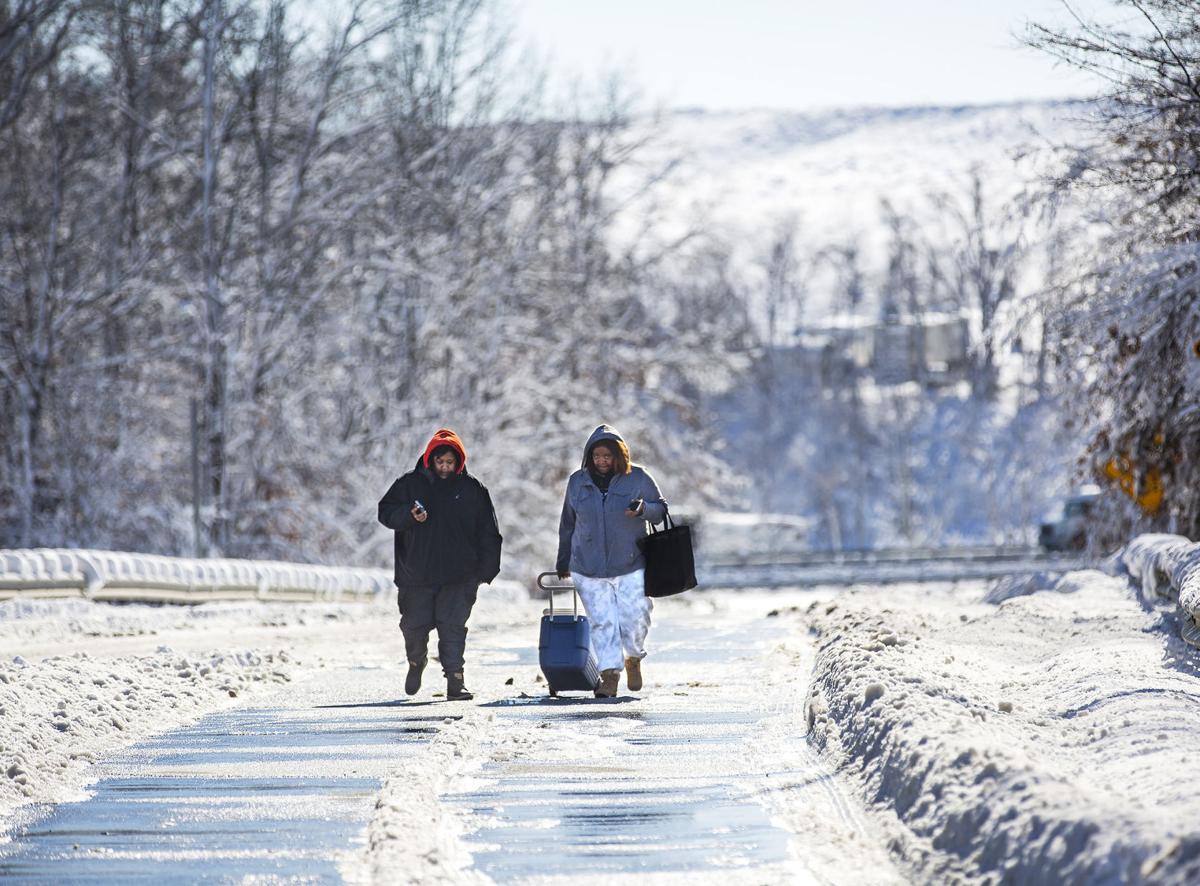 Kiara Davis (left) and Aja Brown walked up the southbound I-95 on-ramp toward Route 234 in Dumfries on Tuesday. The two brought a cooler with beverages and snacks for anyone they may have found stranded on the highway.

Both northbound and southbound sections of Interstate 95 were closed due to snow and ice on Monday, leaving travelers stranded at a standstill for more than 24 hours.

Amid criticism that the state botched preparations and response to a 50-mile backup on Interstate 95, Virginia’s main traffic artery, Gov. Ralph Northam said Wednesday that he was “sick and tired of people talking about what went wrong.”

“I don’t know why you’re sitting there saying, ‘what went wrong?’” Northam said in an interview with WRVA, a Richmond-area radio station, adding that the storm dropped more snow than was expected.

Northam said the public should instead “sit back and say thank you so much” to the state agencies and government workers who managed the storm response, including those braving the weather to help with rescue.

Virginia became the center of national news amid a snow-fueled traffic jam on I-95 that left some people stranded in their cars for more than a day. Virginia’s leaders have faced questions about why the state wasn’t better prepared for the snowstorm, and why they waited hours before contacting stranded drivers and closing the highway.

No injuries or deaths were reported. The roadway was fully reopened on Tuesday evening.

In a statement Thursday to the Richmond Times-Dispatch about his Wednesday remarks, Northam said he wanted to speak up for government workers who had been working long hours and deserved credit “for saving lives in a very difficult situation.”

He added he has a “tremendous amount of compassion for those who got stuck in that scary situation,” and has directed a report to look into the state’s response.

More snowfall was anticipated overnight on Thursday. The Virginia National Guard, at the request of the Virginia Department of Emergency Management, will deploy 50 soldiers and airmen split between the Fredericksburg and Northern Virginia area and Southwest Virginia to assist localities in removing storm debris.

The state’s pretreatment of roads for this storm began on Wednesday and continued Thursday. The interstate was not pretreated ahead of Monday’s snowfall because it was preceded by rain.

Northam, as he did during a call with reporters on Tuesday, shifted some of the blame for the chaos on the interstate to the drivers out on the road that day.

“We knew that the storm was coming. We put warnings out. Why don’t you start asking some of these individuals that were out on the highway for hours, one, did you know about the storm? Two, why did you feel it was so important to drive through such a snowstorm?” Northam said. “And three, in hindsight, do you think maybe you should have stayed home or wherever you were, rather than getting out on Interstate 95?

“I think that would be interesting to hear that side.”

In a statement later, Northam said the state’s communication with the public during the crisis could have been better.

“One of the things I think we need to look at is how to best communicate with drivers before, during, and after these storms—and that’s 100% on us,” Northam said.

But, Northam’s original comment about drivers had already attracted criticism.

“Blaming drivers for the [I-95] multi-day mess is absurd. [Virginia] government failed to deliver, first and foremost,” said Stephen Farnsworth, a professor and director of the Center for Leadership Studies at the University of Mary Washington, on Twitter.

Reps. Abigail Spanberger, D-7th, and Rob Wittman, R-1st, have both called for investigations into the standstill on I-95.

Wittman in a Thursday letter to Northam said the Virginia Department of Transportation should look into how the state could have “improved its response, management, and execution of the incident.”

“While I understand that the snow was accumulating at a much faster pace than originally thought, the commonwealth should have planned for the worst-case scenario,” Wittman wrote.

“It is reasonable to believe that snowfall of this magnitude would cause downed trees, tree debris, fallen utility lines, and many disabled vehicles. Moreover, state officials should have closed I-95 much sooner than Tuesday morning and deployed more resources earlier to assist and communicate with stranded motorists.”

Spanberger on Wednesday asked Northam and Gov.-elect Glenn Youngkin for “a full accounting of what went wrong and what went right, and recommendations for process improvement.”

Northam administration officials, as well as staff at the Virginia Department of Transportation, have said they plan a full review of the state’s response, as is routine.

In a call on Tuesday, Marcie Parker, Fredericksburg District engineer for VDOT, apologized for the situation and called it “completely unacceptable.” Parker said the state did not pretreat the road because rain leading up to the snowstorm would have washed the salt and other chemicals away, rendering it ineffective. She said cleanup crews faced snowfall that was coming down faster than expected and “entirely too much for us to keep up with.”

The backup was focused on a stretch of I-95 between Ruther Glen in Caroline County and Dumfries in Prince William County, in both directions. Problems began to compound Monday morning, when conditions along the untreated highway deteriorated rapidly amid snowfall, leaving trucks and cars stuck on the roadway. Traffic continued to flow slowly until midnight.

Online, dozens of people reported running out of food, water and gas. Communication from the government about the severity of the situation didn’t reach many drivers until Tuesday morning — when the state closed parts of I-95 — nine hours after officials said the road had come to a standstill.

Sen. Mark Warner, D-Va., made clear on Thursday that he is continuing to push for more answers, both from VDOT and Amtrak, about apparent breakdowns in timely information and relief for people stranded on I-95 and on passenger trains in different parts of the state.

“We can’t prevent storms; we can’t prevent jack-knifing of trucks; we can’t prevent a tree limb from falling on a railroad track,” Warner said in an online news conference. “But we sure as hell ought to make sure we can communicate with people when they are caught and in need, and give them more timely, up-to-date information, and in both cases that didn’t seem to be the case.”

Asked whether Northam should have called up the National Guard, Warner said he would wait for a full accounting of what happened before making that judgment. As a former governor, he said, “You don’t call out the National Guard for a 3- to 6-inch [snow] storm,” which is what he had heard predicted.

Armed with a damning report from the state’s inspector general, members of a legislative subcommittee are pushing to remove members of the Vir…

Kiara Davis (left) and Aja Brown walked up the southbound I-95 on-ramp toward Route 234 in Dumfries on Tuesday. The two brought a cooler with beverages and snacks for anyone they may have found stranded on the highway.

Both northbound and southbound sections of Interstate 95 were closed due to snow and ice on Monday, leaving travelers stranded at a standstill for more than 24 hours.