The commission approved a revenue requirement of $78 million for the rate year of Sept. 1, 2022, to Aug. 1, 2023, to be recovered through higher rates for customers in a new clause attached to their monthly bills. 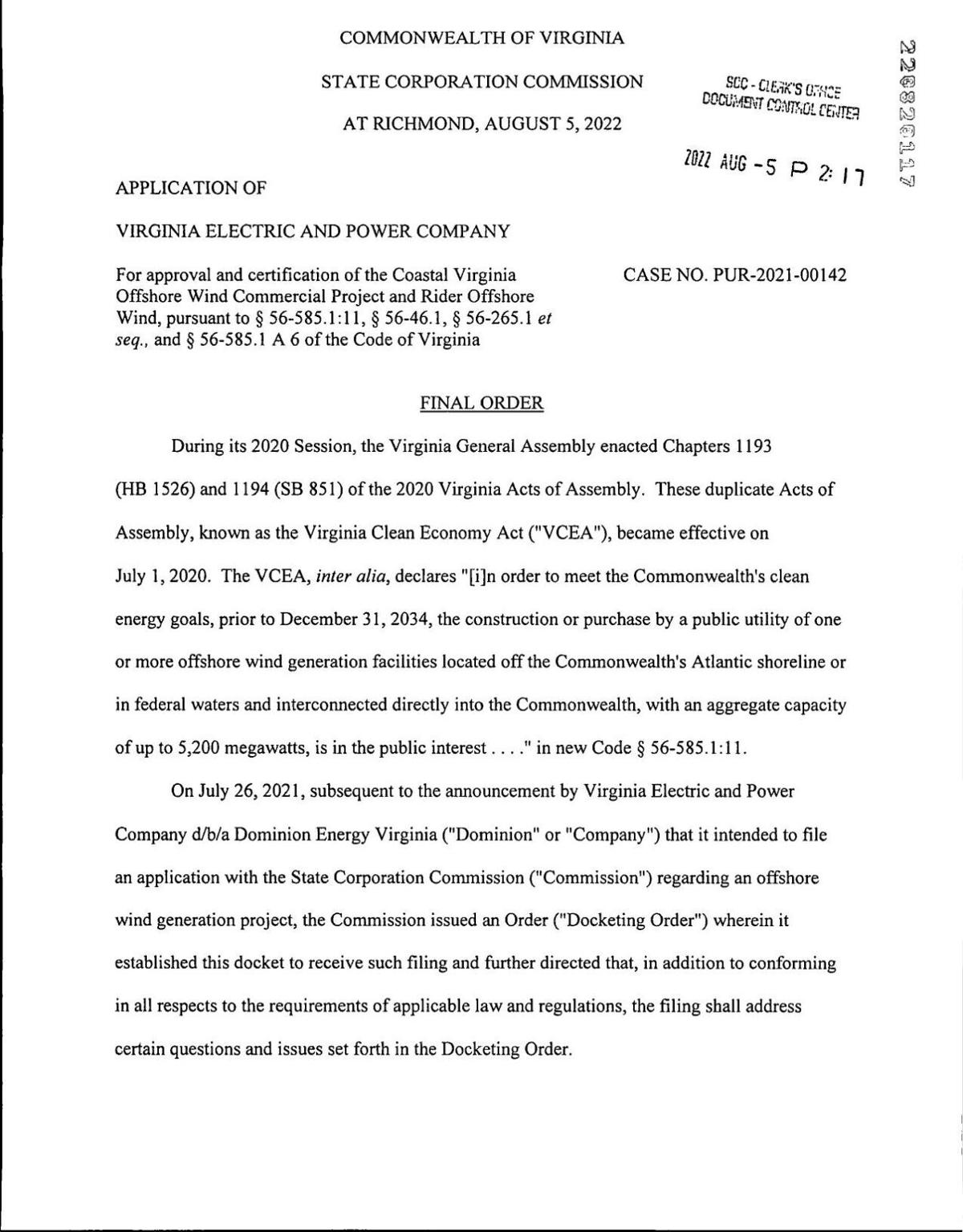 Over the next 35 years, the SCC estimates that a Dominion residential customer using 1,000 kilowatt-hours of electricity per month will see an increase of $4.72 a month, with a peak monthly billing hike of $14.22 in 2027.

The wind farm, planned 27 miles off the Atlantic coast from Virginia Beach, is the largest energy project ever undertaken in Virginia and would be the largest wind project in the country, as well as one of the biggest in the world.

Acknowledging the risk of cost overruns but saying it doesn’t anticipate any, Dominion Energ…

The commission was constrained by the General Assembly from rejecting the project, which the legislature declared two years ago to be in the public interest. But the constitutionally independent regulatory body ordered Dominion to abide by a performance guarantee to protect consumers from additional costs if the farm of 176 wind turbines doesn’t perform as the company predicts.

Under the performance guarantee, the SCC said, “customers shall be held harmless for any shortfall in energy production below an annual net capacity factor of 42%,” a measure of the turbines’ level of production over a three-year rolling average.

“This performance standard does not prevent the company from collecting its reasonably and prudently incurred costs,” the order notes. “Rather, it protects consumers from the risk of additional costs for procuring replacement energy if the average 42% net capacity factor upon which the company bases this project is not met.”

The commission acknowledged that Dominion had argued “that it would be inappropriate for the company to be put at risk if it fails to meet the capacity factor upon which it has justified and supported this project. We disagree.”

Dominion CEO Bob Blue said in a statement, “We are reviewing the specifics of the order, particularly the performance requirement.”

“Our customers expect reliable, affordable energy, and offshore wind is key for delivering on that mission,” said Blue, who also is chair and president of the Richmond-based energy company. “We are very pleased that the commission has approved this important project that will benefit our customers.”

Each turbine in the proposed project will generate 14.7 megawatts of electricity, or enough, collectively, to power up to 660,000 homes. It will also add to Dominion’s renewable energy portfolio and help the fossil fuel utility phase out reliance on fossil fuels — a move mandated in the Virginia Clean Economy Act, which the General Assembly passed in 2020.

The SCC also approved construction of about 17 miles of new electric transmission lines and other infrastructure to deliver electricity generated by the turbines to Virginia homes and businesses.

Dominion estimates the project, expected to begin operation by 2026, will bring hundreds of jobs to the Hampton Roads area during construction and operation, as well as anchor a potential supply chain to “make Virginia a hub for offshore wind.”

The office of Attorney General Jason Miyares has argued that the project is not needed to supply electricity to utility customers, would cost two to three times more than solar energy, and that the company has overstated its economic benefits.

The attorney general’s office also led the push for the commission to include a performance guarantee in its order approving the project.

“Attorney General Miyares is very pleased the SCC agreed with our recommendation to protect Dominion’s customers by ordering a performance guarantee as a condition on approval of the Company’s $10 billion offshore wind project,” spokesperson Victoria LaCivita said Friday.

“While he supports construction of the project, Attorney General Miyares was concerned over the significant risks it created for Dominion’s customers in the event of construction delays or if the project fails to produce the amount of energy promised by the company,” LaCivita said.

“Because the SCC has accepted our recommendation, utility ratepayers will not have to pay the higher costs resulting from any shortfall in the project’s energy production.”

Environmental advocates are glad to see the project moving forward — with the performance guarantee.

“We are very pleased with the commission’s order,” said Will Cleveland, a senior attorney at the Southern Environmental Law Center. “We have long held that offshore wind is a critical piece of our holistic response to a decarbonized and clean energy economy.”

Cleveland said the guarantee will help offset the risks to consumers of Dominion owning the project rather than buying the energy from a third party through a purchased power agreement.

“They’ll own it, but the performance guarantee goes a long way to substitute” for a purchased power agreement, he said.

One of the project’s most forceful critics said he was pleasantly surprised that the order included a performance guarantee that would protect utility customers if the project does not generate at least 42% of its rated capacity.

“If they actually do meet 42%, that is some kind of comfort to those of us paying these gigantic bills,” said Stephen Haner, senior fellow with the Thomas Jefferson Institute for Public Policy, a conservative think tank.

However, Haner added, “I think this is an excessive amount of money for an unreliable source of electricity.”

Virginia official lobbied for gas project his agency will consider

Public records show that a gubernatorial appointee on the Virginia Marine Resources Commission has been lobbying elected officials to support a gas pipeline expansion south of Petersburg.

Ann McLean likened President Abraham Lincoln’s efforts in the Civil War to Russia invading Ukraine. She added that slavery would have eventually ended had the Confederacy remained a country.

"We wanted to have this appreciation day as people come back to the office," the governor said. "It's something to see how happy people are when they see the people they work with and know."

Schapiro: Old problem for new governor - the distraction of ambition

Of 14 governors elected in Virginia since 1969 - seven Democrats and seven Republicans - all but three plunged into or were caught up in the whirl of presidential politics.

The building would have 55 loading docks for trucks and parking spaces for more than 400 truck trailers. It would be smaller than Amazon’s fulfillment center in Chesterfield County, which is more than twice the size.

What’s the matter with Kansas?

The Richmond Times-Dispatch learned via public records requests that no city agency has granted or enforced river permits in approximately five years.

"Given the substantial number of improvements" that the Virginia Employment Commission needs to make "and the challenges and complexities associated with making them," legislative oversight in the near term is key, said Hal Greer, director of JLARC.

Survey: Gen Z and Millennial drivers have a complicated relationship with their cars

Survey: Gen Z and Millennial drivers have a complicated relationship with their cars