A newly released state-ordered audit found Virginia agencies have failed to competently provide information to the almost half a million residents who speak little to no English, forcing them to navigate documents and websites that barely meet basic standards of translations.

The result has been a pervasive lack of access to resources, which denies non-English speakers the right to services in their language as outlined in federal law.

In a 20-month-long public health crisis in which knowing how to keep safe is critical, the consequences of unequal access to information have created a life-or-death risk — one that the Joint Legislative Audit and Review Commission, the legislature’s watchdog, warned about in 2004. Its report urged the General Assembly to invest in making government services more accessible to foreign-born Virginians.

This year’s audit found “limited evidence” that the legislature ever did, even as the population of residents who speak a language other than English at home continued to grow.

More than 66 state agencies and 34 groups serving people with limited English proficiency and people with disabilities informed the 224-page audit conducted by the governor’s Office of Diversity, Equity and Inclusion and Virginia Commonwealth University’s Research Institute for Social Equity.

The Virginia Employment Commission, which handles unemployment claims and was bogged down by staffing shortages, was not readily available in languages other than English or Spanish, limiting the ability of non-English speakers to access their benefits or track the status of their claims.

These language access issues prompted the legislature to commission the investigation with $500,000 from the state’s cut of the federal American Rescue Plan Act, but insufficient and inaccessible language services went beyond VDH and VEC.

In surveys, about 3 in 4 state agencies said they could not meet the needs of people with limited English proficiency most of the time — affecting the ability to obtain critical services like rent relief and language assistance for parents trying to navigate services from the education department.

The most commonly stated reasons for this were extensive costs, not enough interpreters on staff, inadequate understanding among employees on language and disability rights and insufficient access to quality vendors for translating services.

There’s no oversight body or statewide language access policy in place that tracks whether agencies are consistently and efficiently adhering to federal law, unlike the city of Washington and New York state.

Instead, Virginia code designates English as the state’s official language — federally, there is none — and prohibits state and local agencies from being required to provide non-English materials. The audit calls for lawmakers to repeal it.

A significant limitation in the audit: no Virginians with limited English proficiency, the group most impacted by the lack of language access in government services, were interviewed.

Sarah Ahn, a member of the language justice committee at Hamkae Center in Virginia — formerly known as NAKASEC, which has fought for equitable language access and social change for Korean and Asian Americans and helped advise the state report — slammed the exclusion. (The center says hamkae is the Korean word for “together.”)

“People criticize white people for going to different countries and imposing their own solutions to problems that they see. That’s how I feel about not including community members in identifying solutions that are affecting [them],” Ahn said. “You have to get the input of the community. Otherwise you’re not solving a problem. You’re superficially covering it up.”

The Hamkae Center released its own language access audit alongside Virginia’s, focusing on recommendations provided by residents who have faced language barriers. In interviews with the Richmond Times-Dispatch, members of the nonprofit, including Ahn, recounted in grueling, tearful testimony the mental and emotional toll of inadequate language access that was left out of the state audit.

As children of immigrants, they say, the impact begins when kids have to shoulder the responsibility taking care of their family when bills, school papers and hospital documents are solely in English. Federal law states it is illegal to have a child interpret or translate for an adult.

“That would have been great information to know as a child, but it just makes me think about all the government agencies that I have navigated for my family as a 7-, 8-, 10-year-old,” Ahn said. “And these adults just let me do this. They didn’t think this was a problem.”

Hana Cho, who was born and raised in Virginia and interned at Hamkae Center this summer, couldn’t recall a time an interpreter had been offered at a state institution to their mother when the resource was available. During the pandemic, a Suffolk hospital gave Ahn’s father — who was born and raised in Korea — a fact sheet where the Korean section was in Vietnamese. Ahn’s mother, who has spent more than 20 years trying to learn English, struggled to understand COVID information in the early months.

Del. Kathy Tran, D-Fairfax, who proposed the budget language calling for the audit, said that when her family immigrated from Vietnam, her mom was proficient in English. Her dad and many others in her circle were not, creating disparate access to resources. That was more than 40 years ago.

Even now, Tran wonders about people in the state who are not tapping into critical services, or who are “being taken advantage of, or getting lost in translation.”

While Spanish is the second-most spoken language in Virginia and accounts for two-thirds of those with limited English proficiency, the majority of Korean and Vietnamese Virginians are not fluent in English, compared with 42% of Spanish speakers, according to the Migration Policy Institute.

These languages are often delayed in state efforts, said Zowee Aquino, a social worker and policy lead at Hamkae Center. The pandemic forced change, Aquino added, but the question remains: How will the state operationalize this plan?

At the heart of the state’s challenges is the lack of a coordinated statewide effort with standards and guidance for all agencies, including professional development. The result is an ongoing patchwork where some agencies, like the Department of Medical Assistance Services, are developing language access plans, and others lag behind.

Overall, the survey found that most agency leaders felt that their language access efforts were “reactive” instead of proactive, and wanted guidance from the governor’s office to tackle gaps in access. They also requested a central repository of resources, including a statewide contract for translation services.

Of the 102 agencies that auditors invited to be surveyed, more than a third did not respond to questions.

The audit found that oftentimes, state agencies rely on bilingual staff members to do translation or interpretation work without assessing their language skills, which can lead to mistakes. Some agencies, as The Times-Dispatch reported earlier this year, rely on machine translation programs like Google Translate — another pitfall.

“It’s not just having someone who says, ‘My name is Rodrigo, I speak Spanish and do translations at home,’ but rather, ‘I have a certification to do this work,’ ” said Rodrigo Soto, a policy analyst with the Commonwealth Institute for Fiscal Analysis who was part of the team that helped advise the state on the report. “Using those patchwork systems can have very serious consequences.”

Addressing language access gaps detailed in the report will require significant continued funding for the state, which is estimated at $41.7 million for two years to hire personnel and expand services. The report said it will likely be much more expensive if the state fails to take action since language barriers produce poorer health outcomes that can lead to increased spending on public services and employment is heavily tied to a worker’s ability to communicate.

Given the state’s higher-than-expected revenue projections, Soto said lawmakers have a unique opportunity to tackle the audit’s recommendations.

“Even legislative offices need to improve language access within their own offices,” added Soto, a former legislative aide who said that, as a Spanish speaker, he was often asked to field concerns from constituents whose English was limited. “They can even look internally to make sure that constituents that reach out to them don’t have barriers that impede their ability to engage with the people that represent them.”

Tran said she is working with Sen. Ghazala Hashmi, D-Chesterfield, to introduce legislation related to the language access issues described in the report, which Democratic Gov. Ralph Northam’s office issued in the waning weeks of his administration. When Republican Glenn Youngkin becomes governor Jan. 15, Tran — along with the rest of the Democratic caucus in the House — will be in the minority, which will hamstring their power to move legislation through the chamber.

Del. Jason Miyares, R-Virginia Beach, who formerly advocated for better language access in the state and is the son of a Cuban immigrant, will now serve as Virginia’s attorney general as the first Latino elected to statewide office in Virginia.

The report proposes creating a central website and hotline where Virginians with limited English proficiency or people with disabilities can find translation and interpreting services.

The recommendations also include adding eight new positions to the governor’s Office of Diversity, Equity and Inclusion so that the office can craft guidance for all agencies and serve as a repository for resources. The report also recommends hiring two staff members dedicated to language access for 18 state agencies deemed “top priority.”

Auditors also propose the creation of a Language Access Advisory Council to help steer the work of the agencies, training for state workers, creating a certification for interpreters and translators, and developing a compliance and monitoring program to make sure agencies are meeting language access standards.

Still, community groups involved in the study who serve people relying on such services said they were skeptical the audit would lead to concrete action from the legislature and other state leaders since language access has never been prioritized in the past. Without money, agencies said it would be difficult to properly do. And if nothing changes, Ahn said, it would fall back on community organizations and kids.

Because, Ahn said, “If our own state isn’t going to do it for us, I guess we have to.” 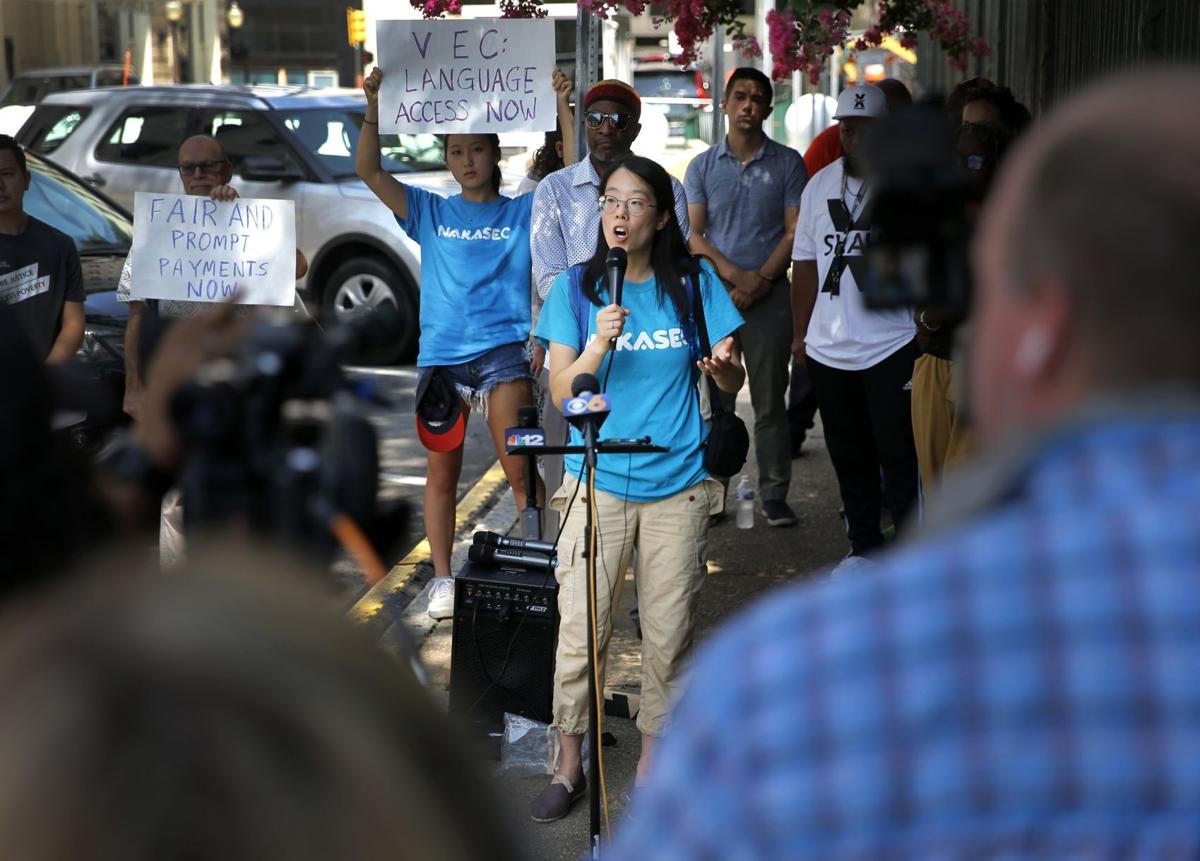 Sookyung Oh spoke in July about language access problems during the Unemployment Action Coalition’s protest against the Virginia Employment Commission in Richmond. 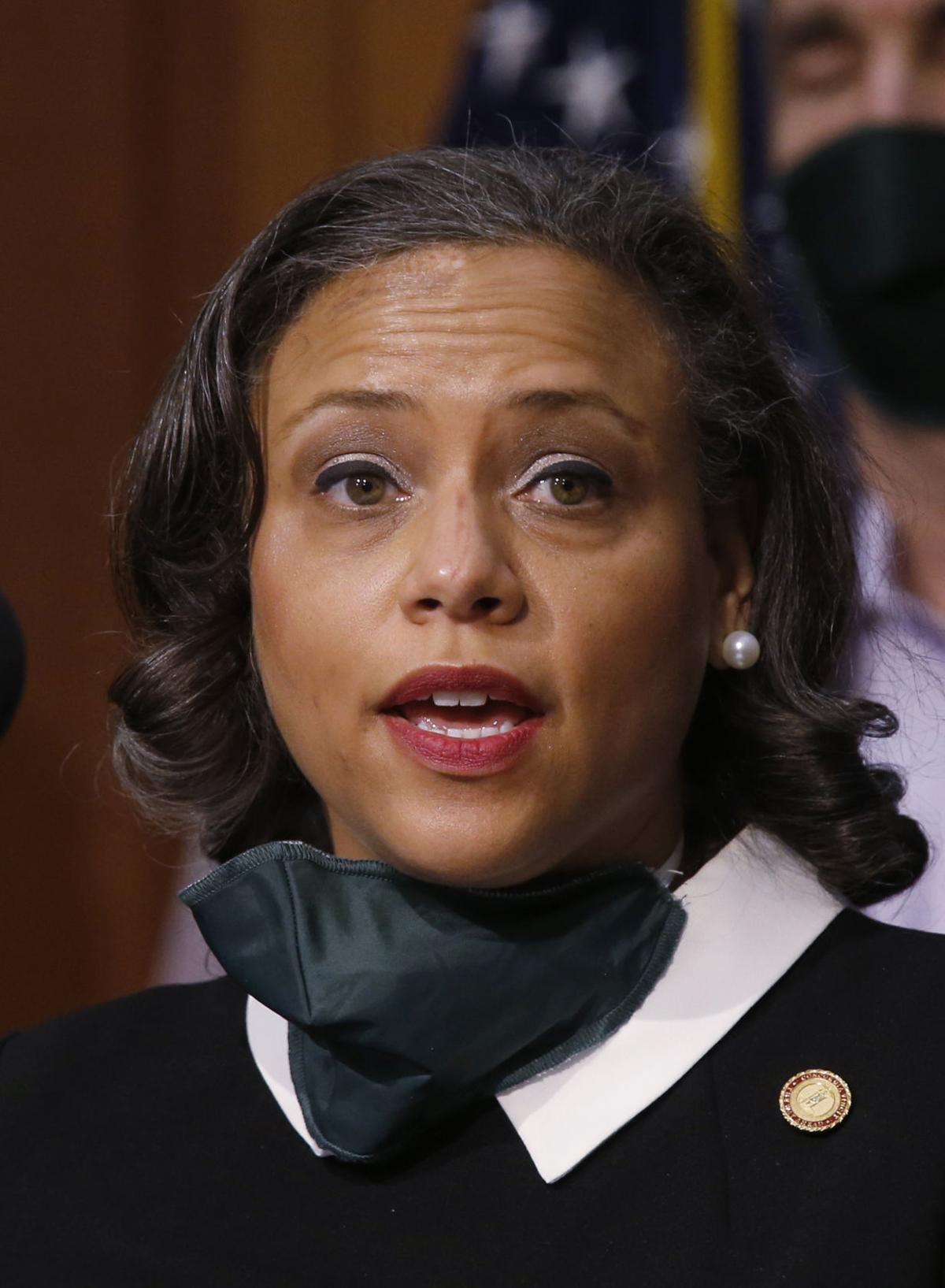 Janice Underwood is the Northam administration’s director of Diversity, Equity, and Inclusion.